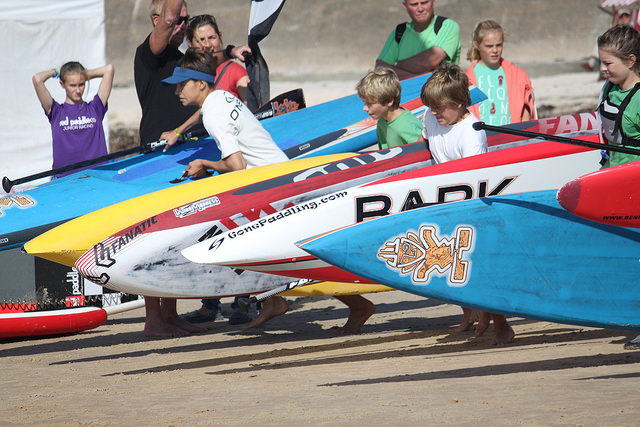 It would seem that UK paddlers do not know the meaning of the word ‘rest’ with yet more racing home and abroad. Here is the SUPboarder Race Round Up for August and September 2015;

The month started with an event that whilst not a race has the potential to influence surf competitions in the UK with the opening of the first public wave garden in Snowdonia. Despite the problems with the site, and that’s it has closed early for the winter, it will be interesting to see if this helps a new generation of SUP surfers to progress. Read more here.

Suffolk SUP started the racing in August, for the UK SUP Clubs round 6 at Alton Water with great junior and open class racing.

The next big event was the SUP Armada, a successful attempt to break a Guinness World Record at the Queen Mother Reservoir near Windsor. 268 paddlers set the record for the longest SUP parade, will there be more next year?

While some racers from the UK crossed to The Netherlands for the N1SCO world Championships, everyone else headed to Eaton Dorney for the third British SUP Club Championships where, after a day of competition, Waterborn SUP Club from South Devon were crowned champions for the first time.

During the event paddlers took to the water to hold a minutes silence in remembrance of Andres Pombo who sadly lost his life training on the Hood River. RIP Andres.

With barely a pause to pack suitcases and boards a hardy bunch of UK paddlers then travelled to the start of the 11 cities event. First off the line was Jo Hamilton-Vale who finished second in the non-stop event, 220km of paddling in under 30 hours! Then it was time for the slightly more sane start of the 11 cities tour with paddlers from the UK,  Andre le Geyt who finished 9th in 22 hours 38 minutes and 38 seconds, closely followed by Pete Holliday in 10th (22.39.20). Next over the line was Crispin Jones in 14th (23.13.07) and Dan Ashford in 19th (23.55.58). Sadly Ryan James, who has been dominating the UK SUP Clubs series, had a nightmare of an event but managed to complete 2 stages finishing 61st overall.

Then, at last, a break in the race schedule. But only for a week or so as a strong field took to the water off Exmouth for the second edition of the Exe Hammer. This is a laid back event with good food and a great atmosphere but still there was tough competition up front with PJ Simmons getting to the bar ahead of Ireland’s Peter Kosinski.

More travelling for the seasoned racer as UK SUP Clubs embarked for Jersey and the Battle of the Rock which saw what could be the closest finish in UK SUP racing this year; Aaron Rowe passing Peter Kosinski on the run to the flags to take second place by 1 second!

Back on the mainland SUP racers were packing their mountain bikes and running shoes and heading to the final SUP Bike Run of the year in Chichester. With plans for more events next year these give a new focus for the multi-skilled / multi sport SUPper. Hopefully the SUP leg will be extended to make it more important in the overall results.

In addition to these events there was a downwind event held in Scotland,  a summer race series over in Ireland and the first Celtic Crossing Competition.

October will see the finale of the UK SUP Clubs series at Waterborn SUP Club in South Devon, with winners already decided in some classes, Ryan James in the 14′ Male and Jo Hamilton-Vale in the 12’6″ Ladies, but there are still podium places to be contested. As Summer coming to a close the SUPboarder Events Page is now starting to fill with winter races series, time to find your winter suits and see you on the water.