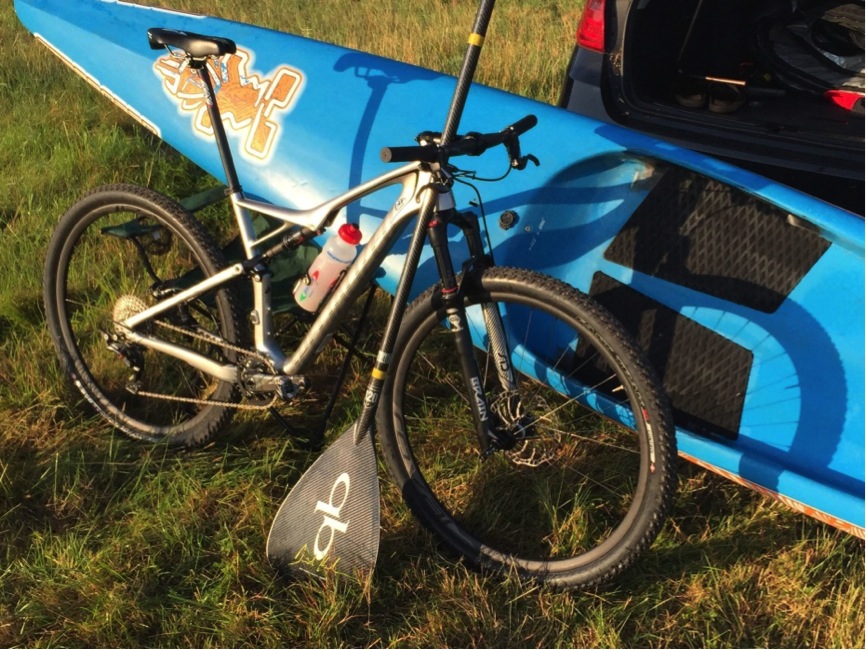 The SUPbikerun series of events held across the UK this summer has been a great success for all ages and sporting abilities. Since the first event was held on Exmoor we’ve seen the entry level increasing at each event. As well as those enjoying a fun weekend challenge, top level SUPers, bikers and runners are now starting to take an interest in these unique events. Such competitors at the last event of the series in Chichester included Bryce Dyer. Bryce is a master on a bike (a world class time trial rider in fact!) and is getting faster every season on a SUP. Is this the start of the new breed of SUPbikerun competitor? Bryce tells SUPboarder how the event was for him…

With the race calendar for many starting to wind down (or those with a bit of competitiveness still in their system looking to grab a late season blast), 160 keen paddlers headed over to last weekend’s Supbikerun #4 event held down in Chichester, Hampshire.

The format was pretty simple. It takes a triathlon format but switches out the swim for a SUP paddle. The overall distances of the race are pretty achievable for anyone so it’s not an insurmountable challenge and the event had attracted a broad cross section of participants from everyone to the diehard endurance racer right across to the first timer just looking for a challenge.

The SUP leg was a 3Km technical ‘M’ shaped course, the bike leg was a lumpy 27Km mountain bike mud fest and the final run was a 5Km cross country jaunt. The novelty of this particular event was that it doesn’t involve a mass start. Instead you can start anytime you like within an hour’s window which made for a relaxed atmosphere and for me evaporated away years of last minute nervous visits to the portoloo’s…..

I made a return to this event after last year’s inaugural outing which didn’t go particularly well for me. I blew my back out in the SUP paddle, got lost multiple times on the bike leg and generally sulked my way round the run. So, I thought I’d give it another go this year to make amends. The event was some weird kind of symbolic transition for me from being one of a cyclist to moving into SUP paddling properly from next month.

I noted in the car park that a few familiar faces from the UKSUPclubs race scene had also rocked up for this one. Starboard team rider (and frequent supbikerun’er) Scott Warren was there, as was Jimmy Lewis team rider Jason Sawyer, recent EXE Hammer vets cat winner Maff Wall and race regular Colin Elston. I was generally curious to see if I’d improved my paddling from my attempt last year and these guys would be pretty good measuring sticks to judge against. Maff, Scott and myself were in the same start wave so with the sun shining and the breeze starting to pick up, we headed into the water about 30 seconds apart from each other. Maff went first and wasted no time in making short work of catching competitors in front of him but he was being hotly pursued by a rampaging Scott. I was trying to keep both of them within reach (and decided beforehand to opt for my ginormous 120sq inch paddle blade to help smack my board round the frequent 180 degree turns) but the elastic was being stretched at every buoy by those two. 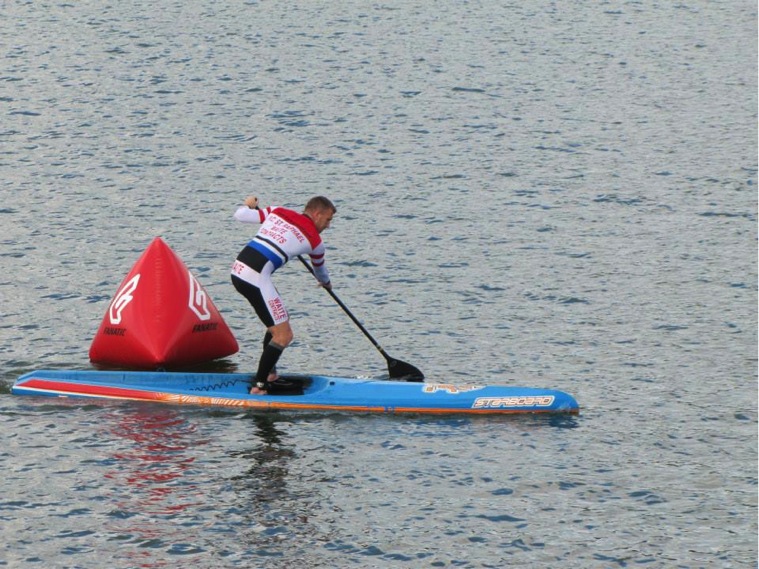