The second edition of the Exe Hammer had different finish to the first one held last year but other than that change the rest of the event was strangely familiar when Chris Jones from SUPboarder took to the water for the start off Exmouth Beach… let the fun begin. 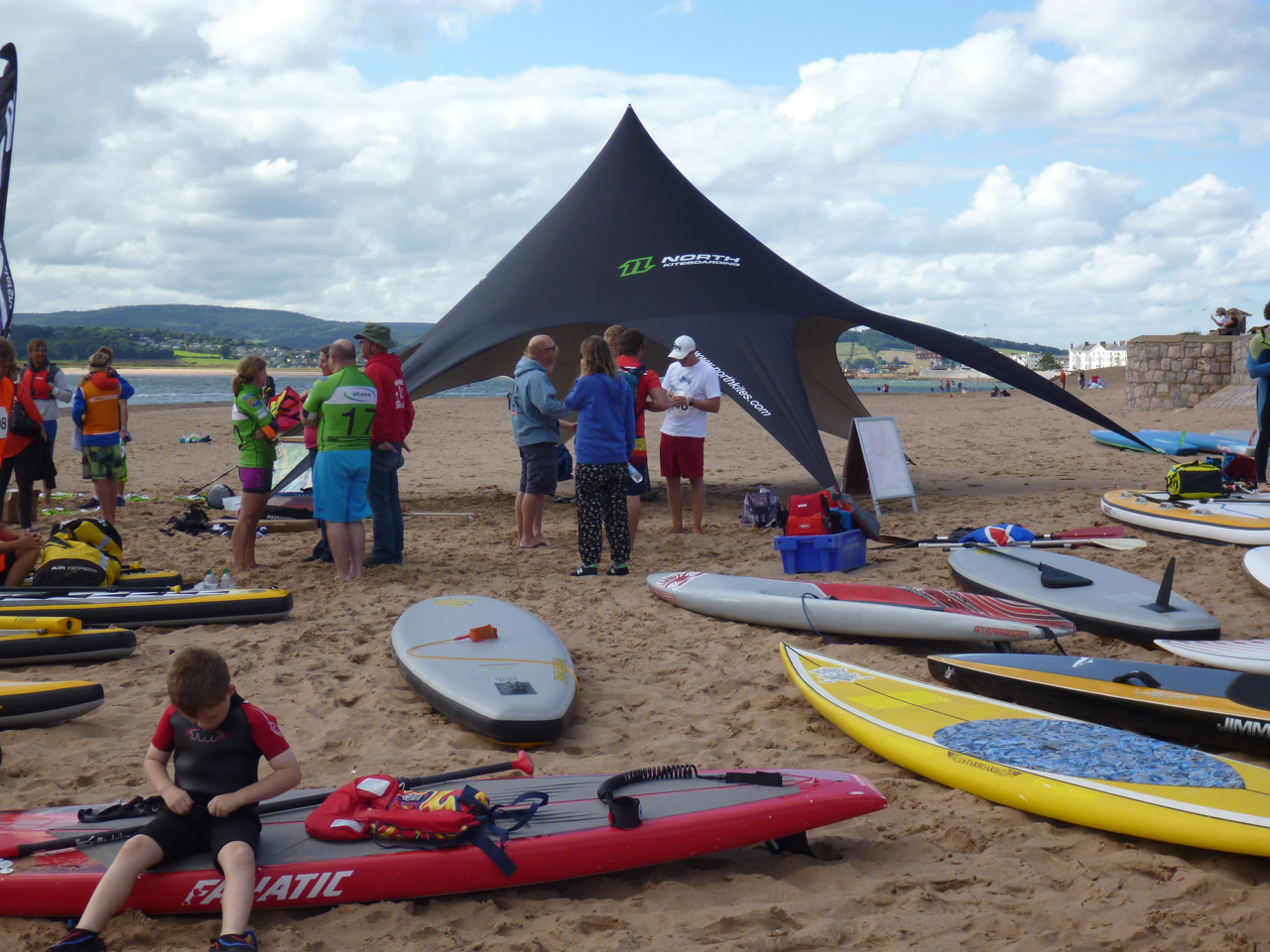 Change can be a good thing but when things are just the same they feel comfortable, knowing what’s in store before a paddle begins can settle the nerves a little making the experience more fun. Arriving in Exmouth for the 2015 Exe Hammer I had that sense of deja-vu, it was sunny, just like last year, there were a lot of cars with paddle boards on them, just like last year and it was windy, just like …

Registration was on the beach where Steph from Edge Watersports managed to get a diverse field of competitors into order with her pre-race talk. There were some changes from the 2014 event, the start was nearer the river mouth due to the conditions and the finish was further away, approx 12km, with only two checkpoints en-route competitors could decide on their own route to the finish.

I always like to check out the boards at the start of any event as sometimes I’ll see something new or exotic that I’ve not seen before. The fleet here was largely inflatable with a huge number of N1SCO boards from Naish on the beach. Nestled amongst these were the usual Red Paddle boards, a selection of Rides, Races and my Explorer, and a selection from Fanatic with a Vandal or two. Then two sleek hardboards caught my eye,  a Jimmy Lewis U126 and a 14′ from SIC, a rare sight in the SW of England.

It was no surprise to see very few boards in the water 10 minutes before the start. With the wind gusting from the west and an incoming tide staying near the start was going to be tricky and would consume energy so most elected to take to the water with a few minutes remaining to the scheduled start at 14.00. Then,  exactly on time we were off.

The start of any race is hectic but with the way the water was moving this one was even more so, I saw several paddlers go straight into the water and many more elect to stay on their knees for a bit but given the relaxed nature of this event that wasn’t a problem. I’d brought a big stable board as I wanted to take photos and just enjoy the atmosphere but as soon as I stopped to take one I was going backwards, not the best way to progress up the course.

At the front of the field the more experienced racers got stuck into the conditions, with Paul Simmons, Maff Wall, and SUPboarder’s own Peter Kosinski and Marie Buchanan leading the way, a series of brightly coloured dots heading up river from my perspective.

And so the race went on, I for one throughly enjoyed it, chatting to others, enjoying the atmosphere and the scenery as we made our way upstream. The wind appeared to drop slightly mid race which made the paddling easier but we all still had to concentrate as the incoming tide in places was about fin deep leading to embarrassingly slow progress if trying to take a tighter line.

As the finish approached I found myself in a group of 4, two Red Paddle Race boards ahead and a surf style Fanatic inflatable beside me, number 48. Typically for middle aged men we had to sprint, at the line the width of a paddle blade separated me (52nd) and Peter (53rd).

One of the main attractions of the Exe Hammer is the post race food, provided this year by the Pig and Pallet on Topsham Quay and this didn’t disappoint if the silent sound of paddlers refuelling was any indication. Alex from Naish took that opportunity to recruit paddlers for the N1SCO sprint event that was run just off the quay, often to the amusement of crowd attending the Beer and Bacon Festival being held that night. A series of close races held late in the evening provided all with a great end to the day. I’m already looking forward to next year.

This year’s event built on the solid foundations laid last year with a larger field and a longer course making what was a good event in 2014 into a great event in 2015. SUPBboarder will be there in 2016! Will you?

Is it possible to get the contact info of the videographer/photographer from the event please? Many thanks

Video and photos are by Edge Watersports in Exmouth. We didn’t have direct details of videographer, sorry.