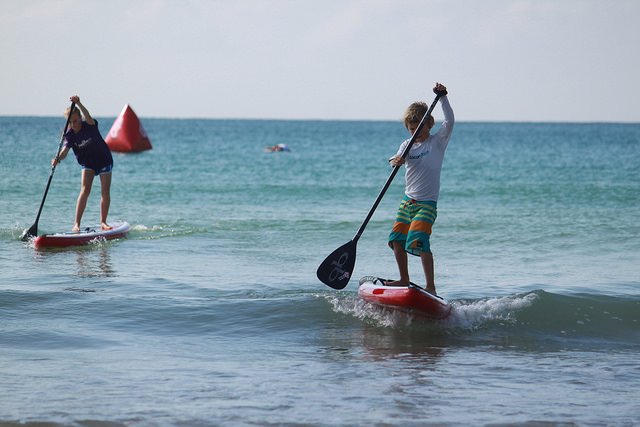  Jersey has a small but growing group of hard core paddlers who have competed around the UK, Europe and in the World Championships and so the Jersey Paddle Club created the Battle of the Rock in 2013. John Harvey updates SUPboarder on this years’ event. 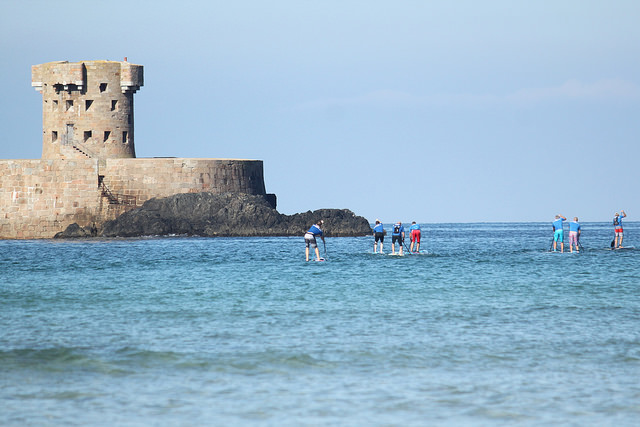 The B.O.T.R shows off some of Jersey’s amazing coastline, beaches, forts and castles. It challenges the new and  advanced paddler and brings liked minded people from the UK and Europe together for 2 days of fun where new friends can be made and old acquaintances renewed.

The format for the two days is as follows

The event now in its 3rd year continues to grow with 75 entrants made up of racers from the Guernsey, UK, Ireland, South Africa, Australia and France. However due to the ferry issues only 2 of the 8 from France made it to the event.

After the horrendous weather the 5 days prior to the event it was a welcome sight to see the wind drop and the sun shine for the 2 days of racing. With continued sponsorship from Sure mobile, Fanatic, ION, Windmadness.com and Gonepaddling.com plus support  from Jono’s Watersports and Absolutes Adventures the event was able to offer large cash prizes to our Elite classes and product prizes supplied by Fanatic, ION and Gonepaddling.com to our Open classes. 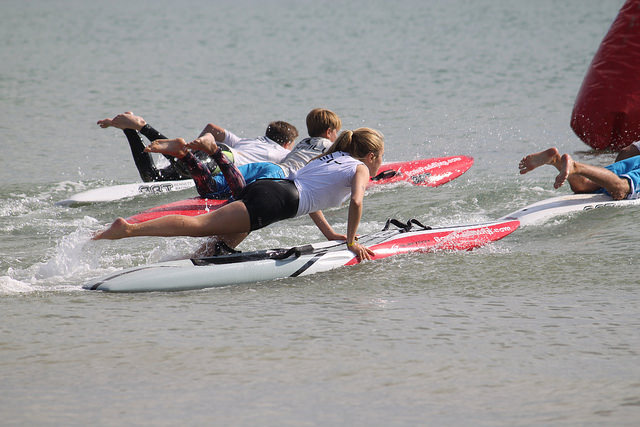 The event kicked off Saturday at 10:30 with the distance race for the elite SUP group and Open Men’s Surf Ski. This race also formed part of the UK SUP Clubs race series. The racers had to tackle a 13.7 km course which took them out of St Brelades Bay to the right where they went around Sail rock before paddling across the bay to Noirmount lighthouse and around to St Aubins Fort. Once around the fort paddlers retraced their route but this time pulling in to Portlet bay to go around Javrins Tomb before making the last turn back in to St Brelades Bay and on to the beach for a run to the finish line. The course included both upwind and downwind sections as well as flat water and some chop and back wash from the rocks, some of it was also against the flow of Jersey’s famous big tides with a lot of paddlers struggling against the fast flow at Noirmont. Several of the UK paddlers found themselves at the edge of their comfort zones with the chop and the currents but there were safety boats following the racers the whole  course. Local, Aaron Rowe finished the course first overall on his 12’6 beating the fastest 14′ by 45 seconds.

The adults SUP, Prone and Ladies Surf Ski open group set off at 11:00 for a 7 km course that took them out of the bay to Portlet, around Javrins tomb which is a small island in the bay and back in to St Brelades for a beach run to the finish line. 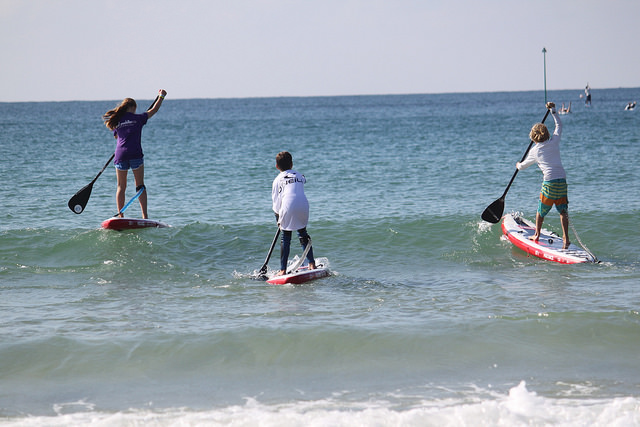 With 15 juniors entered from the age of 8 to 16 their course was a triangle inside the bay. The juniors were made of  SUP and Prone paddlers and the amount of laps depended on the division they were in. It was great to see whole families from the UK and Jersey taking part in the event and all the kids having an amazing time.

 In the afternoon we moved to the technical race which is a course made up of multiple markers designed to have lots of turns. This type of course keeps everyone quite close together and makes for exciting viewing as the lead position can change very quickly if someone falls at a turn.

Depending on the class and division you were in would determine the amount of laps to be done so as to cater for all levels of ability. But no matter what division, everyone had to finish with a beach run. This always makes for some excitement as groups of racers hit the beach at the same time and battle through the shallows to get to the beach and sprint to the line. (picture ref-Beach run) This race provided the most excitement in the 12’6 elite class with the lead three paddlers swopping positions on each lap due to some tight battles on the turns. All of the races provided a great spectacle for the numerous people enjoying the sun on the beach. Ryan James took the 14′ win Stephane Guiomar the 12’6 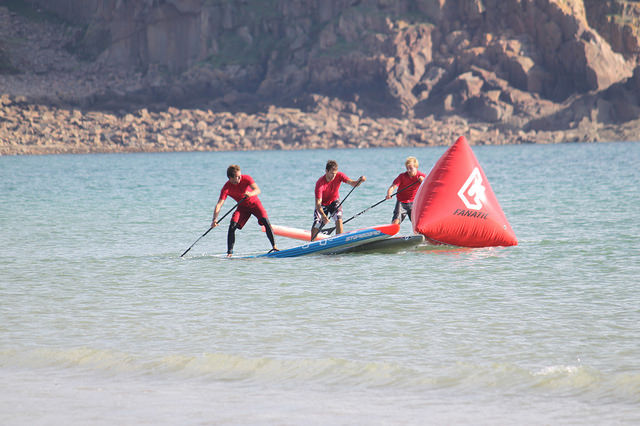  With day 1 at an end all racers met up at the mid way party which this year was held at the St Aubins Royal Yacht Club.At the party the winners of the Jersey Paddle Club summer series sponsored by First Names Group were announced as well as the winners from the UK SUP Clubs race.

  Day 2 was held at La Braye on the west coast of the island. The weather was stunning with clear skys and light winds. The day was kicked off with the Elite Technical surf race. There wasn’t much In the way of surf but just enough to make the race entertaining.

The course was set up to allow for two possible chances to surf a wave as well as going around and in front of La Rocco tower. As with all the races that weekend the finish was a beach sprint across the line. 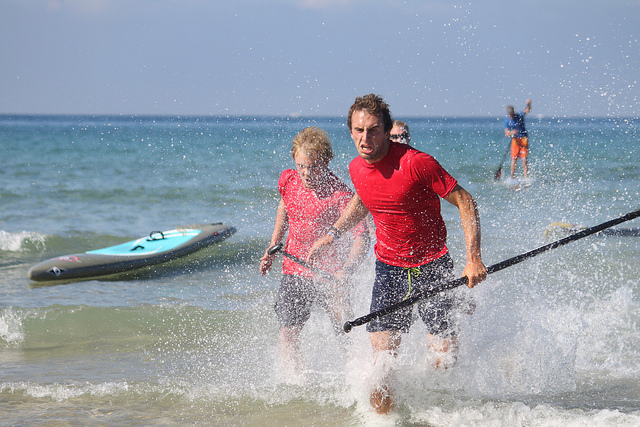 Local Aaron Rowe and Peter Kosinski from Ireland had another great battle around the whole course with it coming down to a dramatic beach run for second and third place with Aaron taking second by 1 second. Stephane Guiomar took the 12’6 class win with Ryan James taking his third win in the 14′ class

This result left Peter and Frenchman Franck Le Ven in joint 3rd place over the 3 races which meant they had to have a sprint off to a marker a short way off the beach and back with the first person to cross the line keeping the 3rd place. It was Irishman Peter Kosinski who took the win on the sprint.

The open classes all completed the same course as the elite but with a reduced the lap count. There were some close battles but the highlight was the Groms sprint race (6-11). There were 3 in this group all riding the same type of board. They had to sprint to a marker a short way off from the shore, back to the beach, around a beach marker and back to the water marker 3 times. There was a tight battle the whole way between local lad Toby Axford and from the UK Lotti Smith. The two came in to the last stretch neck and neck with Lotti just beating Toby on the beach run.

The day was wrapped up with a prize giving on top of the German bunker overlooking the bay and La Rocco tower. The Elite classes all received prize money supplied by Sure Mobile

The winners after 2 days of racing were

For more information on the Battle of the Rock check the Facebook page: