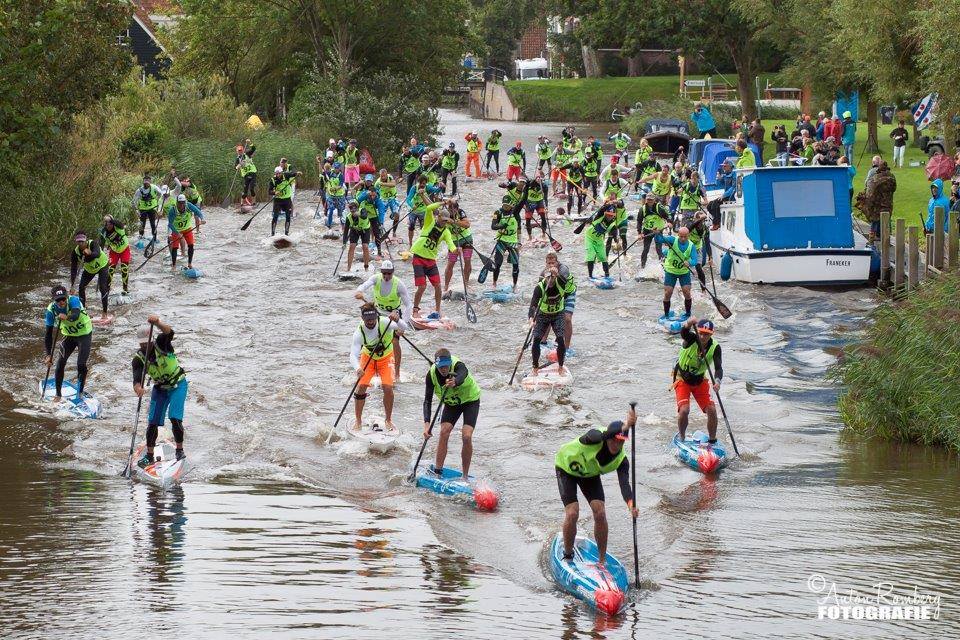 Last week saw one of the longest and toughest SUP races there is, taking place in Holland… the 220km, 5 day, 11 Cities SUP Tour. Pete Holliday and a hard core group of other UK paddlers took part in this historic event.  Being the first time Pete has taken part in such an event, he decided to share with SUPboarder his training and preparation (part 1 & part 2) leading up to the big day.  And in this 3rd and final part he tells SUPboarder what the event was like and what 5 days of tough paddling really feels like?…

This year saw the most stacked and talented field of paddlers from around the World looking to compete in the longest, toughest SUP race there is.
Over the last two articles I’ve covered my training & preparation for this incredible event, here’s how it all went down in the end!

I travelled over with Ryan James & met the rest of the UK team there the night before. It was a late night by the time we got there and an early start required in order to eat, prepare & be at the registration tent for 8am. We signed in, collected GPS devices & set to work prepping equipment ready to race.

Before we knew it we were lined up on the start line waiting for the gun. The start was absolute mayhem! Around 100 paddlers all trying to get away to the clean water. I made a slight error starting next to one of the more or less unknown Hasulyo brothers (We all certainly knew about these kids after the race!!) they went off like absolute rockets leaving me with no clean water. I managed to hang in there through the carnage & get to a reasonable position behind the front pack working with Andre from Jersey & SUP Racer’s Chris Parker. We got a few km’s done passing one of the top guys Pepe Oltra who had just snapped a paddle. Then it all started going wrong for me, I fell three times in a row & the last fall my VestPac came undone and I just couldn’t reach behind to try & get it sorted. I pretty much had to take it off, re-clip it all before I could get going again loosing me probably 3-4mins on Andre & Chris.

It certainly fired me up and I smashed it for the next 5km to catch the group of 4 ahead lead by our very own UK machine Crispin Jones. I got to the back had a drink and a nibble of food & took a few minutes rest on the draft. I knew I couldn’t wait too long & pushed my way past and told Crispin to jump on the back so we could work.

We took turns pushing hard for a couple of km’s, passing Chris who seemed to have blown up & eventually reeled Andre back in. With him also in tow I knew we could work hard. Dan Ashford from the UK had put in an astounding effort & paddled up to our group too. We tried to get him up with us at the front but it’s really hard to get the order right when there’s so many people in a train, some who don’t want to play ball!.

I figured we needed to break the long train before the rest break so I put in another big effort. Dan said that night he couldn’t believe where the next gear came from as I literally stormed away taking just Andre & Crispin with me, shattering the train. (Seems the training was paying off!)

We caught & passed two other paddlers I knew would be tough competition this year. Ricardo Haverschmidt (who I’d battled with in the European circuit this year) & last year’s 3rd place Martijn van Deth. We went past these guys with ease which really surprised me!

We got to the rest stop, the manic re-fuelling for 15mins (most of that is lost getting out, getting your bag & getting back on the water again) & hit the water for the final leg.

Right at the end of the stage is a lake crossing which is notoriously choppy & exposed. This year with strong NW winds we knew it wasn’t going to be pretty. Just as we closed in on the lake Pepe who broke his paddle earlier suddenly appeared alongside pulling Ricardo and a couple of other guys we’d left behind earlier. We hit the lake & sure enough it was carnage. I went straight in the drink! The wind was at a 45degree angle & 1-2ft which made it really hard to handle on a race board. Andre shot off showing off his amazing balance & skill in the surf leaving the rest of us flailing around. I stopped for a second, took a deep breath & got to work. Paddling the 2km entirely on my left side doing everything possible to stay on the board. Richard Proost (who I’d come to battle with every day) snuck past me looking way more stable but took slightly the wrong line allowing me to close a gap as we exited the lake & sprinted the last 1.5kms through town to the finish. Richard just beat me my 7 seconds but I crossed the line in 10th place with a time of 5:24:05.

After a good night’s sleep it was back to it again. Another crazy mass start & heading back into the lake to cross again heading NW now into the wind! This time another of the top guys Peter Bartl snapped a paddle!

I established a good position at the front of the second group & worked hard with Andre to keep us at the front as we got to the other side & the narrow forest section.

Ricardo has a slight gap on us ahead so I got to the front & worked to catch him. Sat there for a minute & pushed past to lead the draft train through this really narrow long 7-8kms section. I looked behind at one point & there must have been a train of 30-40 guys all sat in drafting… choo choo.

Eventually we broke up the train through the day as we passed through more open water lakes that allowed some opportunities to mix things up, then towards the rest stop the most horrendous storm hit! Driving rain, gusting 20-30kts headwind, lightning… and a slog for 3kms into it all before the break! We arrived all freezing cold & were ushered by our amazing support team into a small toilet block where the top guys were already huddled under blankets. Fortunately the organisers extended the break to 30mins to allow the storm to pass, and after a quick change & some food we got back out there & started to warm back up again.

We had a small group working right the way through the afternoon of this the longest day of the event. As we got about 6kms out from the finish we were caught by Peter Bartl who having lost at least 20mins though his paddle issues had stormed back through the pack to catch us. He was flying & a man on a mission. I knew there was a chance to break the group so let him pass & jumped on his tail. He sprinted really hard but somehow myself & Ricardo stuck with him (just) & got a break on the group. The crazy pace continued right into the finish with Peter & Ricardo sprinting it out, me crossing 2 seconds later in 8th place and a time of 5:48:29

The third day start was much better, they separated the top 10 guys to a start line 10m ahead as it was so narrow! I got away clean & was sat with the top guys for the first km of so. Then their pace stepped up & it was just too much to hold this early so I let them go & the group behind me of Ricardo & Martijn took the lead & I slotted in behind. Tactics came into play & I let them do a good share of the work up front as I was feeling really tired today after the big efforts the two days before. Plus these guys knew the course & there was a lot of twists & turns along with some horrible windy wet conditions!

Towards the end of the day we were going to enter a shipping canal, a huge wide expanse running 10kms towards the finish. There was talk it would be downwind conditions & that gives a chance to break things up. When we got there however it wasn’t quite what we hoped for & I was really suffering by now, I had nothing left in the tank. Andre, Ricardo & Yuval skipped ahead & Richard caught me up. I jumped on his draft knowing I had to keep him close as we were still only seconds apart in the overall standings. I took everything I had left to just hold his tail as we slogged to the end of the channel & the last 2kms into town through the twisty section. Hanging on for dear life I crossed on his draft in 12th place 4:42:30

That night the results came out & had me 8 seconds behind Richard. This really threw me & got me wound up. I put so much effort in but somehow the times were wrong possibly costing me a position overall. I barely slept that night & hit the big low that everyone who’s competed in this race said I would get at some point.