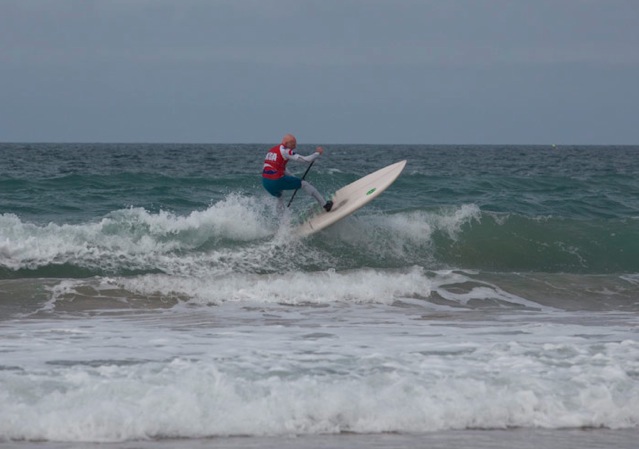 Legend of the bay

On 27th-28th April  the ‘Legend of the Bay’ event took place at Watergate Bay in Cornwall. The first of it’s kind, this unique event brought wave riders from 2 different disciplines together, featuring both SUP and Kitesurfing. Competitors were able to enter either single or combined events with the overall title ‘Legend of the Bay’ being awarded to the individual with the highest combined score from both disciplines. Luckily the event had been designed so that the format of the competition could be adapted to all weather conditions. 20mph northerly cross shore winds and 2-4 ft swell on Saturday provided great conditions for the kite surfing heats. And light winds provided better SUP conditions on the Sunday. But unfortunately the dropping swell over the weekend meant that by the end of the SUP heats and at the final it was a knee-waist high shore break! Despite the small swell, it was a great event and everyone seemed to have a good time.  24 kiters and 22 SUPers took part in the 2 day event with 14 taking part in both disciplines.

Check out the photo album with over 100 pictures from the weekend;

The kite surfers had great conditions on the Saturday with a solid swell which made for some great action throughout the day.  Lee ‘ Pasty’ Harvey was loving the conditions that the comp had to offer.  Dom Moore and Danny Morrice were also kiting well but Lee proved unstoppable and they couldn’t catch the pasty!! Unfortunately there was only a small entry into the ladies kitesurfing comp but again some great wave action by both Keira and Sarah, with Keira taking the win.

The SUP side of the contest had a mixed ability from kiters who don’t SUP to SUPers who don’t kite! After a day of 10 mins heats it all came down to the 3 Cornish boys Alex, Reuben and Lee who enjoyed battling it out in the final on their home ground despite the lack of waves. Alex Murray surfed well throughout the contest and well deserved his win.

Well done also to all the ladies who took part. Hopefully we’ll see more ladies getting into the competition scene in the future.

From two sports there can only be one ‘Legend of the Bay’ ….

Well done Dom and Keira for their win. Just goes to show you what you can do with a Starboard Whopper in the waves!

The event proved a great concept with lots of the kiters talking about putting in their practice hours for the SUP side of the comp next year. And many SUPboarders wanting to learn to kite to give them a chance to be a Legend of the Bay at next years event. So get out on the water and get some practice in for the next Legend of the Bay.