Passionate stand up paddleboarder and ocean advocate Cal Major has once again been back on her board to highlight the issue of plastic pollution in our oceans and to help promote positive environmental change. This time Cal headed to the Maldives as part of the ‘Stand Up for Our Seas’ project – raising awareness to protect Maldivian marine life. Cal shares her story…

“Never doubt that a small group of thoughtful, committed citizens can change the world; indeed, it's the only thing that ever has.”

In February 2019, I was part of a four-woman strong team which completed an unprecedented stand up paddle boarding expedition in Baa Atoll in the Maldives, raising awareness of the need to protect marine life, and the necessary actions to do so.

Between the 21st and 28th February, Dr Claire Petros and myself Dr Cal Major, veterinarians from the UK, and Saazu Saeed and Dhafy Hassan Ibrahim, Maldivian Ocean Advocates, paddled 100km over 8 days, the likes of which has never been done before in the Maldives.

The four of us all consider ourselves ocean advocates – passionate about protecting the oceans we love so deeply. Our love for the oceans stem from different motives, but they are all derived from a deep connection to the ocean environment, and what it means to us. This ranges from protecting the wildlife, ensuring a healthy planet for our next generation, to the simplicity of marvelling at the differing colours of the water and the sun when it hits the horizon.

Our expedition was a vehicle to visit schools, local islands and resorts along the way to give presentations, run beach and harbour clean ups, and investigate the myriad of solutions to plastic pollution and climate change already in place in the country, with the aim of inspiring further positive change. Our messages were universal and non-critical – not there to point fingers at anyone, but rather to celebrate the solutions in place to inspire further change, and to help people to see the importance of caring for the environment. 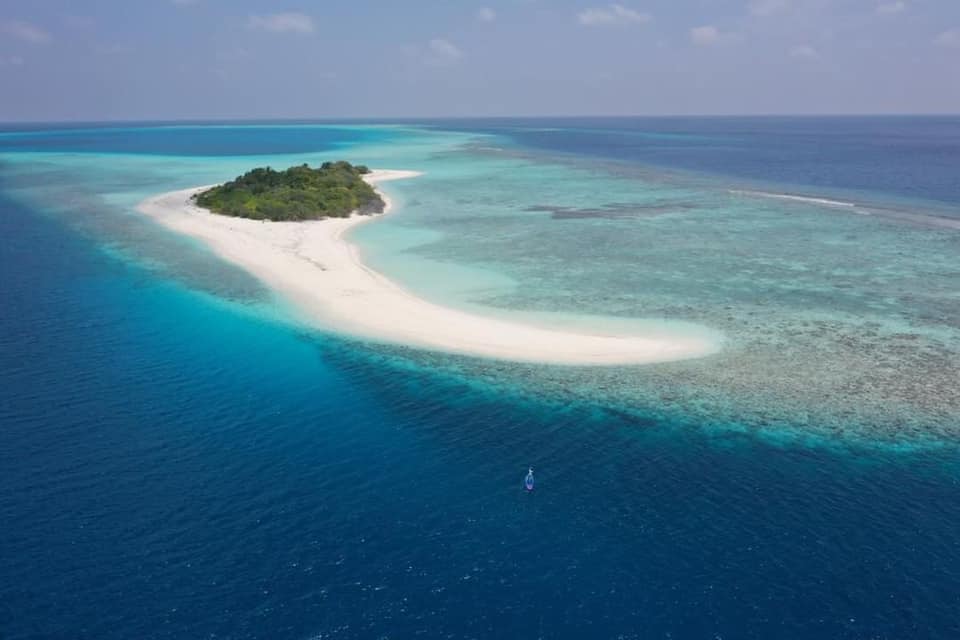 I honestly never thought I’d have the opportunity to go to The Maldives. For me it held connotations of honeymoons and affluence beyond my means. However, during this trip I have discovered so many different aspects of this diverse country, its wildlife and it’s passionate people.

The Maldives is renowned for its pristine marine environment and abundance of wildlife, but it is also so vulnerable to plastic pollution, coral bleaching and climate change. Thousands of marine creatures every year are entangled in lost or discarded fishing nets (ghost gear). Thousands more ingest plastic fragments, causing starvation by obstruction and poisoning the food chain.

The Maldives is the lowest-lying country in the world, made up of more than 1200 islands surrounded by coral reefs which support the ocean ecosystem. Due to warming seas, these corals are becoming bleached, with progressively less ability to recover. The rising sea levels are severely threatening the islands, with estimates projecting that they will be under water in 12 years if current trends continue.

Dr Claire Petros is the lead veterinarian for the Olive Ridley Project, a UK charity working to protect turtles in the Indian Ocean from ghost fishing gear. The week before our SUP tour, as part of an Olive Ridley Project research expedition, we found an entangled turtle floating on the surface, unable to dive. This really hammered home the importance of the message we were delivering.

We met with Dr Hussain Rasheed, the Minister of Environment, before setting out on our voyage, and his message was a clear global call to action: The Maldives is taking responsibility for its own carbon emissions, aiming to become the first carbon-neutral country. They are supporting plastic free schools programmes, and helping islands to become plastic free. Resorts are answering consumer demands to use less plastic, and most have desalination plants to make drinking water, removing the need for plastic water bottles. The use of fishing nets is not common practice in the Maldives; pole and line methods are widely used instead. The nets arriving in ocean currents into the Maldivian waters, entangling the megafauna here, are usually from further afield.

Even with the Maldives working towards making all the changes within their power, it will not be enough to save the country from rising sea levels. It is up to the global community to take action to prevent carbon emissions and climate change from irreparably destroying this country.

The expedition received copious in-country media attention and support, and was to be used as a vehicle to encourage continued positive change, and to inspire global action. In fact, at several of our local island stops we were even asked for selfies!

We paddled a gruelling 100km between 16 islands in the beating sun, fighting dehydration and exhaustion. I was by far the palest of the group, so spending hours in the sun all day was the biggest physical challenge for me!

Although I knew we would have to push to meet our targets and engagements, I had imagined glassy calm waters, and easy days paddling, interspersed with wildlife sightings and splashing around in the sea. The wildlife sightings were the only part of this that came to reality! We were hit with unseasonal headwinds and waves, and several times had to battle against strong currents.

People often ask why SUP instead of the easier option – a kayak. Where would the challenge be in that? One of the main reasons is the perspective you get from standing tall on the water like a warrior, able to see everything going on in the water underneath you – underwater forests and creatures that you’d miss from a kayak.

As a vet, this is one of the primary drivers in my campaigns. OH my goodness, when the spinner dolphins arrived! We were fortunate enough to paddle with dolphins, manta rays and turtles, and regularly saw fish under our boards on the reefs we paddled over. 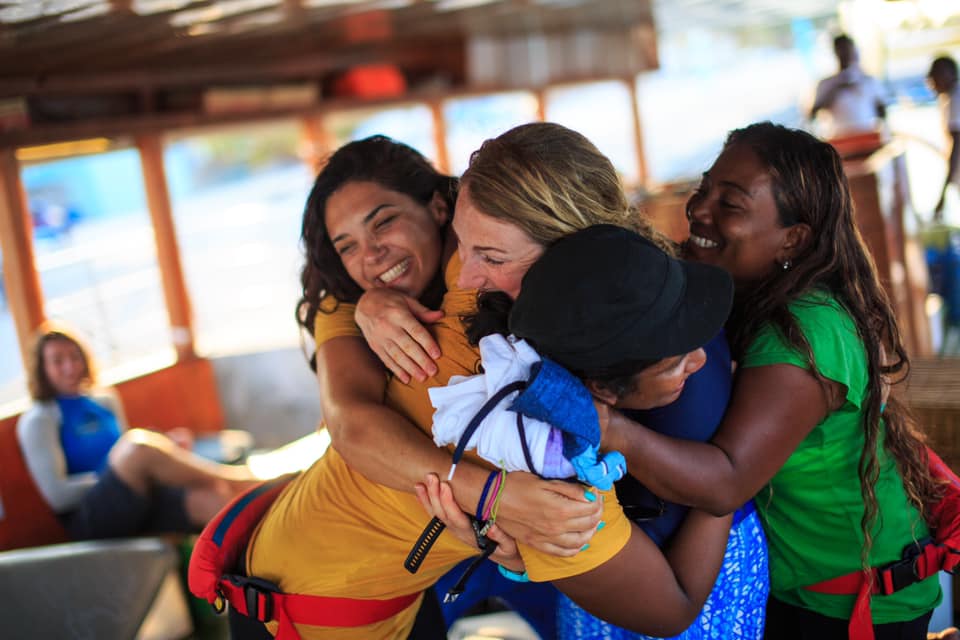 Most of my previous expeditions have been solo, so for me having a team of women was one of the biggest highlights and challenges of the trip! I feel so, so fortunate to have had the opportunity to get to know these women’s stories, passions and spirits, and we quickly learnt our respective strengths, slotting them all into place to create a succinct and unstoppable unit. Parts of expedition life that had previously been difficult or tedious for me came naturally to the others, and vice versa. Of course, there were stresses with having so many people in a team, and the phrase ‘it’s like trying to herd cats’ was used more than once to describe attempting to get us all in the same place at the same time! I feel I’ve not only learnt about these women in this trip, but as a result more about myself, what I have to offer, and where I fall down and need to accept help.

Until we finished, and talking to Dhafy and Saazu, I also don’t think I appreciated how unusual this kind of thing was in the Maldives. This was four women, taking it upon themselves to try and change the world, to talk to people, and to physically push themselves. We also opened ourselves up for criticism and scepticism, a particularly vulnerable place for women in the Maldives to be.

An important part of our message was to engage schools, and this was particularly important to Dhafy and Saazu, who regularly run events with children to help them understand how amazing our oceans are. We delivered 3 school talks, and in one school even had children giving US a presentation about the work they were doing to manage waste on their island. Each local island we visited was different, with varying levels of commitment to removing single use plastic. But the majority of the children we spoke to were connected to the importance of the ocean, even if just through the importance of fish in their diet.

We ran several beach clean ups with the school children, and found that making a game out of them was the best way for the children to engage in the activity, although they didn’t need much persuading! In Eydafushi, the atoll’s capital island, we teamed up with Parley to remove over 150kg of plastic from the beach.

We also stopped off at several uninhabited islands en route. The first, Muthaafushi, is a stunning island to look at. Upon closer inspection we discovered it was absolutely covered in plastic bottles. We collected as much as we could fit in all the bags we had, but our morale was hit to think of this man made problem affecting the wildlife there.

At another island, Mendhos, a favourite spot for turtles to nest on, we saw some fishing net on the beach. After half an hour of yanking at it, attempting to dig it up, cutting bits free, sweating, swearing and getting thoroughly sunburnt, the blisters on my hands made me call for help. James spent the next 2 hours digging, sweating, swearing and cutting and eventually retrieved all 200kg of net, most of which was buried in the sand. And I thought I was stubborn!

We also cleaned up harbours, beaches and streets near the water. The islands are so tiny that any litter dropped has the potential to end up in the sea. Locals would often stop and watch us, and we hope this encouraged them to think a little differently too. 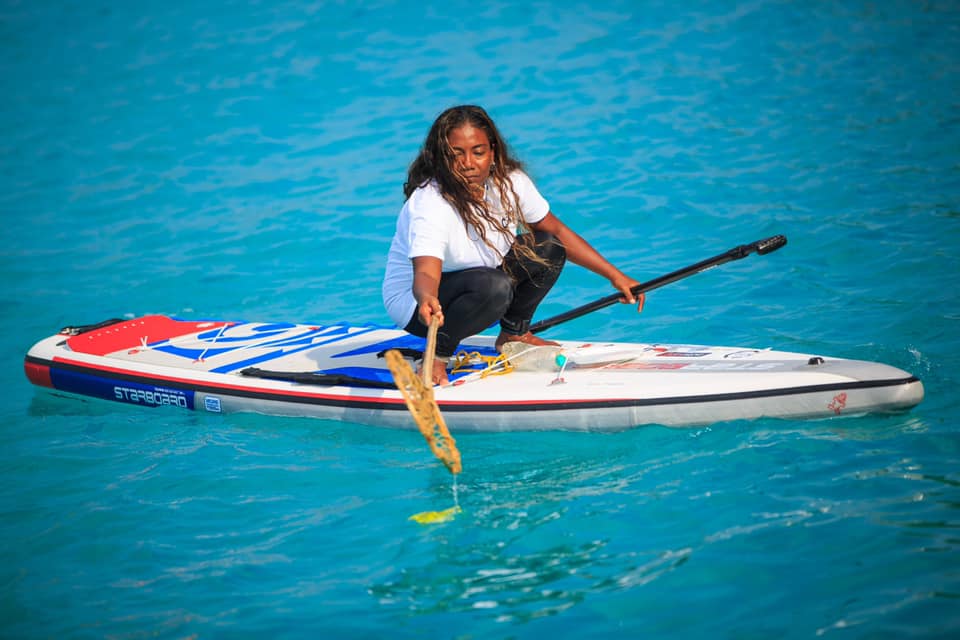 We stopped at several resorts to give presentations to guests, and met some truly engaged and lovely people. It was also a nice change to sleep in a king sized bed occasionally rather than on the deck of the boat with the mosquitoes!

I was very relieved to see that many of the resorts were going a lot further than I had expected to limit their environmental impact. Every resort we visited had an on-island desalination plant which allowed them to make drinking water, which was bottled in reusable glass bottles, removing the need for any plastic bottles. We also saw NO plastic straws at any of the places we visited! And most of the resorts had bathroom toiletries in refillable containers, so each guest wasn’t given a barrage of tiny plastic bottles. Why are the resorts making these changes? A lot of the managers of the resorts had a genuine passion for protecting the environment. Some said it was in response also to pressure from the guests. Guests are really starting to notice when plastic is used, and they don’t want to see it. Consumer pressure is the main driver of change in the tourism industry, and this is where we can all have a voice now that we’re more aware of the problems. If somewhere is doing something you don’t like, ask them to do it differently. These messages really are getting through, and making a difference.

So What’s Next for Stand Up For Our Seas?

We were welcomed home by the Minister for Environment, Dr Hassain Rasheed, who commended us on the awareness raised by the campaign, and bringing the message to the world. His endorsement, along with the positive reaction from the Maldivian press, has resulted in several parts of The Maldives, and indeed the world, to invite us to replicate Stand Up For Our Seas in their home environment. Watch this space! 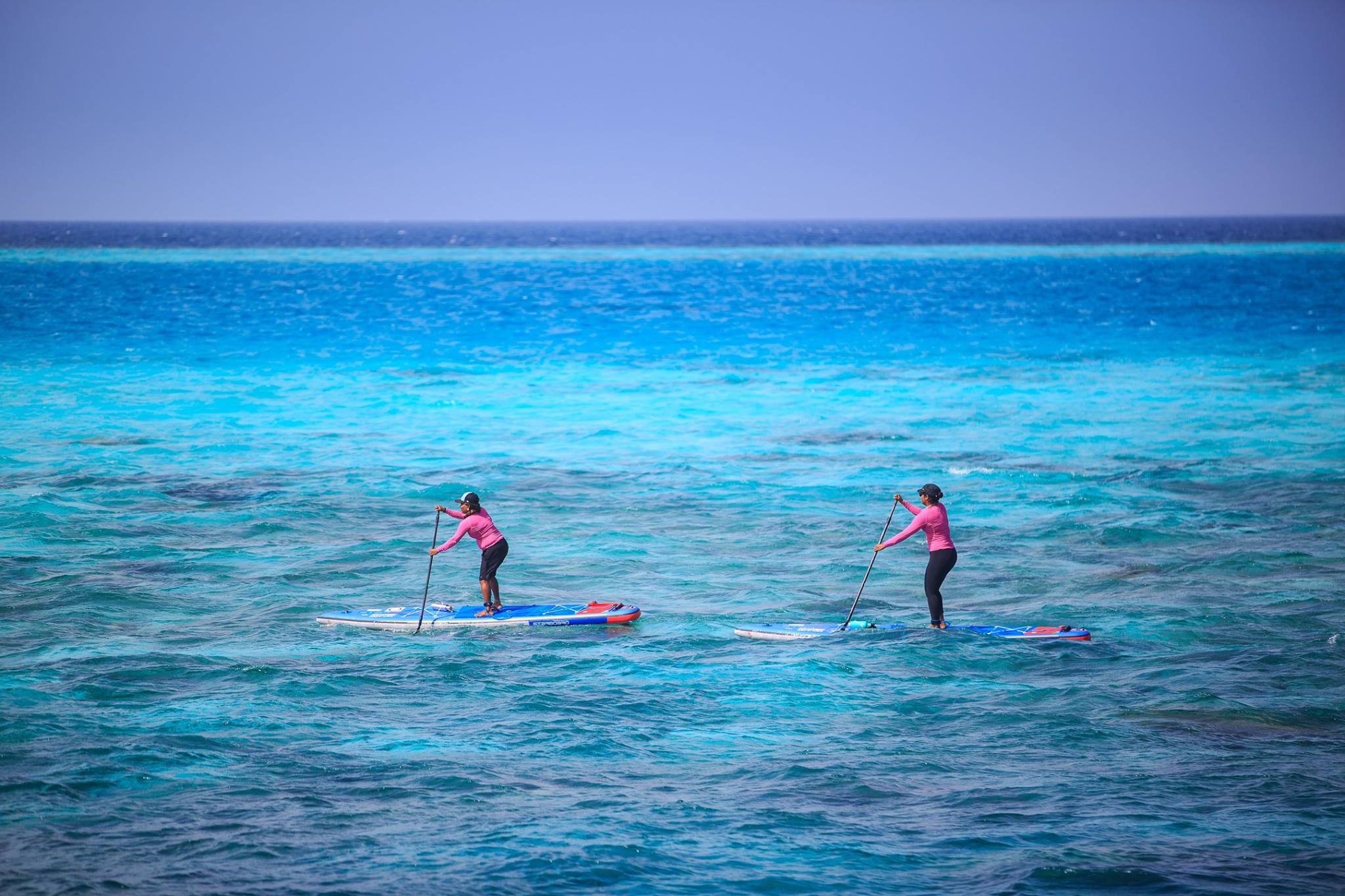 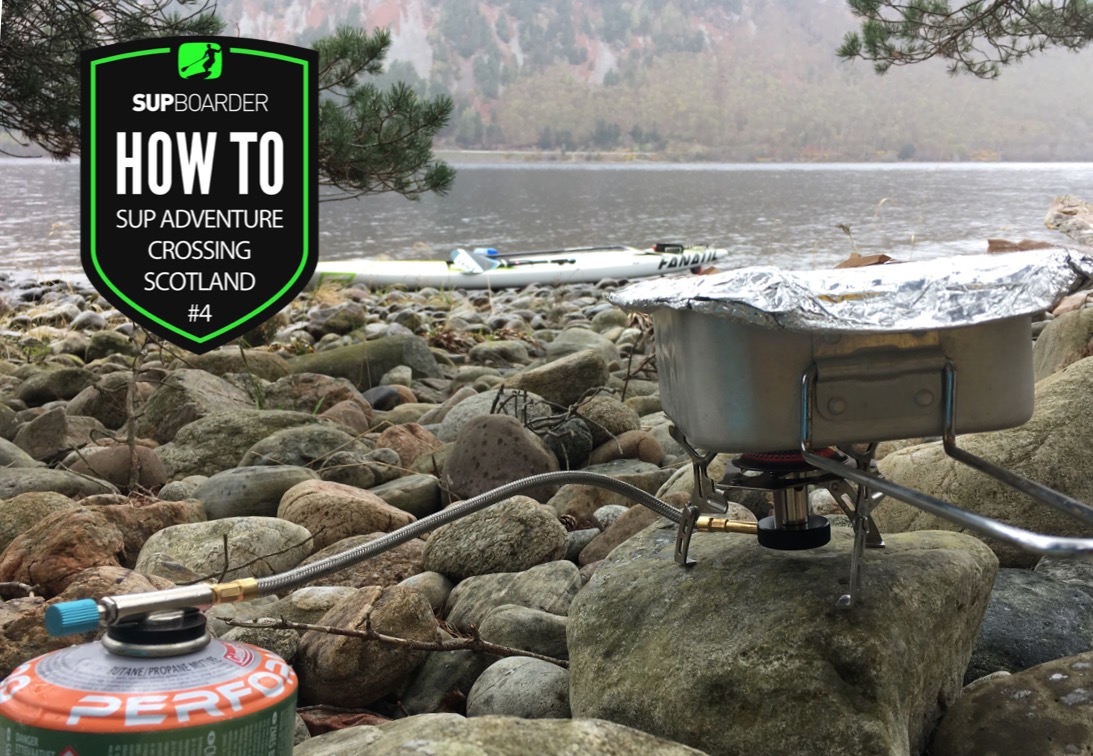 A SUP adventure crossing Scotland Part 4 / How to Video 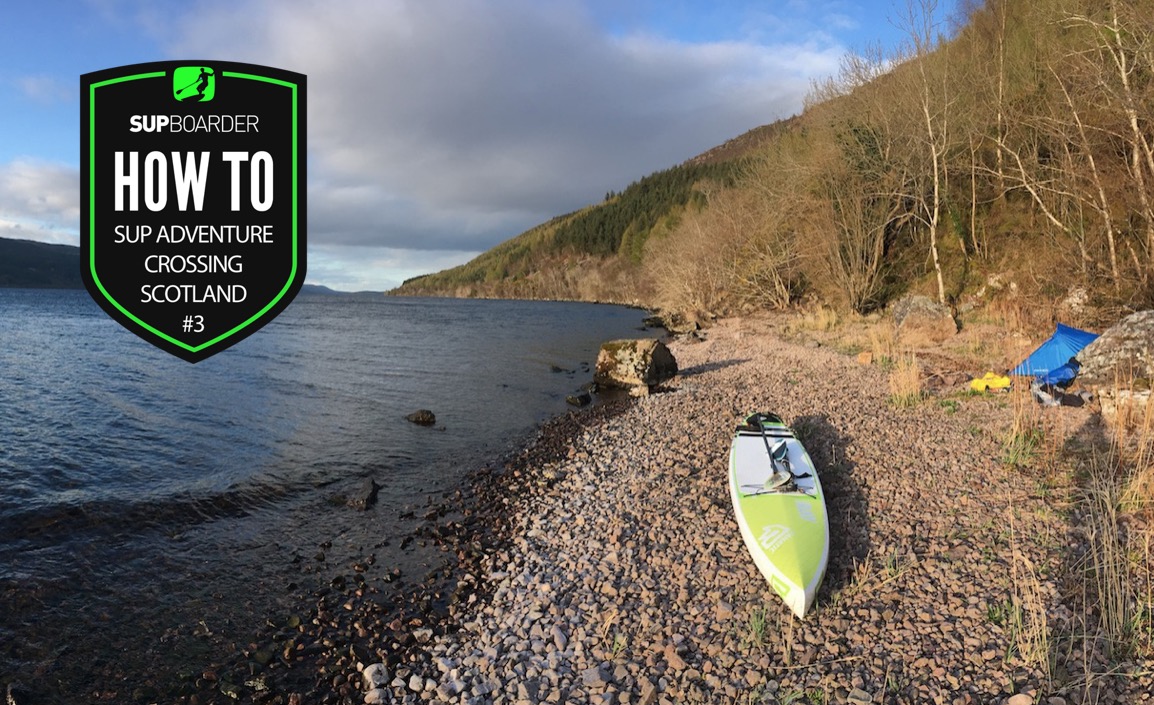 A SUP adventure crossing Scotland Part 3 / How to Video 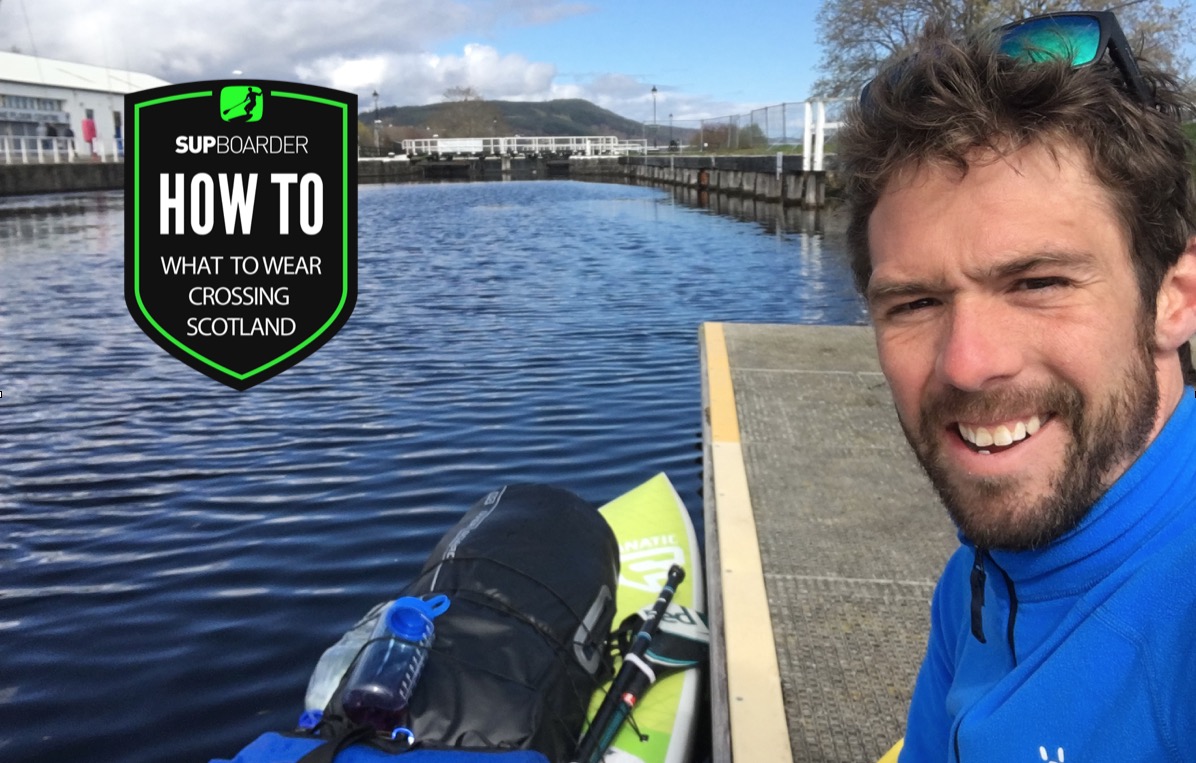 What to wear on a SUP adventure crossing Scotland 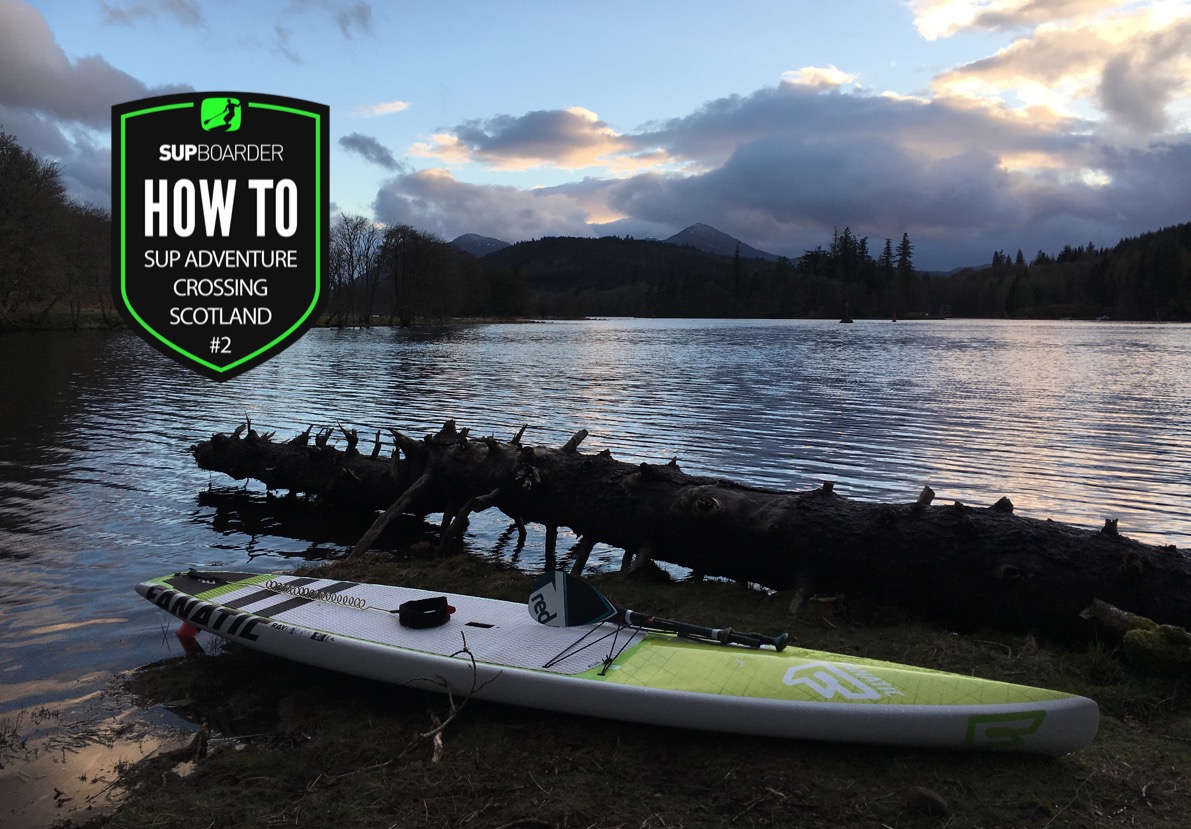 A SUP adventure crossing Scotland Part 2 / How to Video 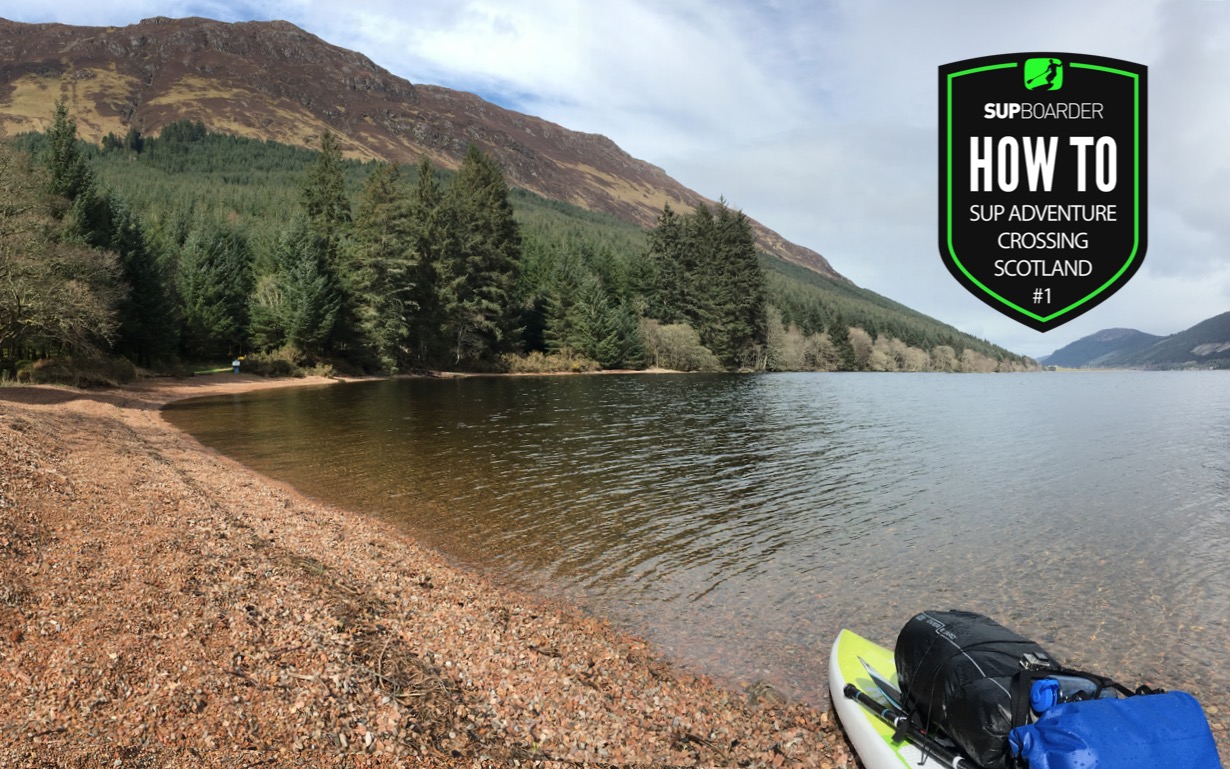 A SUP adventure crossing Scotland Part 1 / How to Video