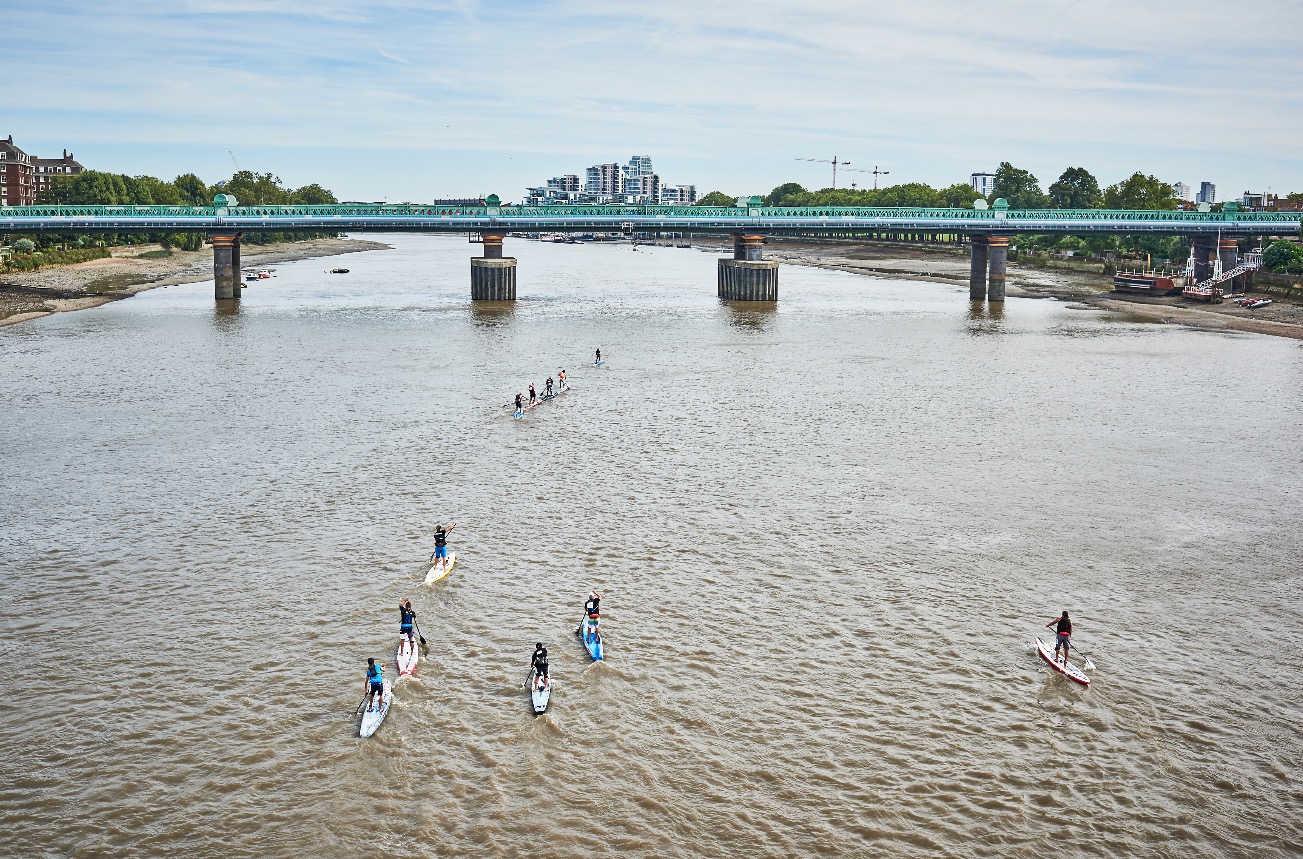 SUP racing is a great opportunity to travel and paddle in different locations. But with the restrictions in place up until now, seeing the impressive sights of central London has been something you can only do by foot, open top bus or tour boat. SUPing on the Thames through Central London has previously been a no go. So when the opportunity arose (after much hard work and negotiation!) for the first ever SUP race to take place past the impressive sights of Big Ben, the London Eye, MI5 and the Battersea Power Station many paddlers jumped at the chance to be part of it.

South Devon paddler Crispin Jones was one of those fortunate few to be selected to take part in this first trial event, with the hope of making it a success and the start of a regular race on the events calendar. Crispin shares his Big Ben SUP Race paddling experience, and explains how he had to work hard to see the sights of London by SUP!…

Having had a hectic summer teaching in the shire and missing out on a lot of the 2016’s race season the idea of par-taking in a trial run race on the iconic parts of the Thames was definitely appealing. Although it was only ever going to be a small group of paddlers for the first year I thought I’d submit my interested and let the choice be down to the luck of the draw (and Bryce’s number crunching!)…

Thankfully I made the cut alongside some of the UK’s top paddlers and a trip to the Capital was on. Having relatively little experience of the tidal Thames and indeed London as a whole I thought I’d do a little research into the conditions I could come to face on race day. Stories of swirling torrents of water and strong tides as well as plenty of fast moving river traffic seemed fairly common place and it felt fitting to choose a board more comfortable for sea like conditions, so the All-Star took its place on the van ready for the trip. However, not wanting to leave my trusty board behind I put the C14 on the roof for good measure just in case.

Our safety briefing and start location was at the Westminster School Boat House, one of the oldest rowing clubs in the world with records dating back to 1813. It’s no surprise they were keen to get the first SUP Race started there, on the tidal part of the Thames and then to head down river past Putney Bridge and to head into previous restricted water in terms of Stand Up Paddling. Having arrived a little earlier I took to my bike and started to cycle down alongside the river to assess the conditions to see which board would be most suitable. Visually it looked fine from where I could see and I was assured that the river is much better at Low Tide compared to High Tide where it can become extremely challenging and dangerous. My mind was made up, the trusty C14 was called to service once more! I polished it with ‘On it Pro’ and stuck on a map of the river with the dangers marked provided by the race directors Active 360. 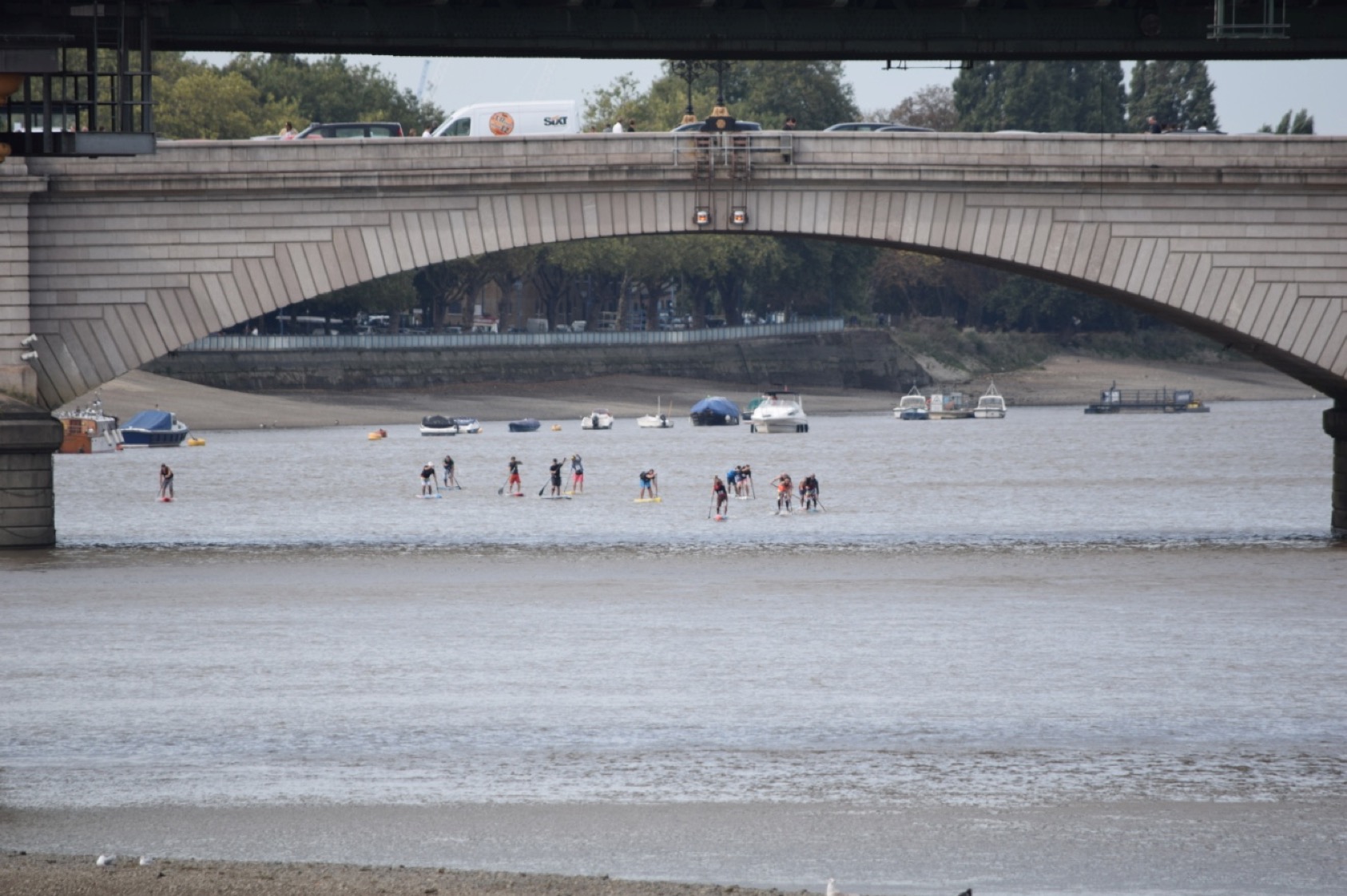 The women were first to the water and set off 9 minutes before the men, this was deemed the fair handicap by Dr Bryce Dyer. They set off downstream to become the first to undertake this unique opportunity in the hope to allow the evolution of the sport and make a huge iconic race in years to come. We were next to take to the water and tried to hold our ground against the outgoing tide but also with a head wind. It became difficult to know exactly which was the stronger and it seemed that even at low tide the river was going to be different to regular river races I had been in. We were soon off and trying to chase down the ladies who had already made a big gap with the flow of the river in assistance. Paul Simmons made a clear gap at the front of the men’s pack but places were still very tight between the rest of the fleet. The wind was on our back for the most part and small groups were forming and moving trying to make the most of the flow of the river as we meandered through the capital. 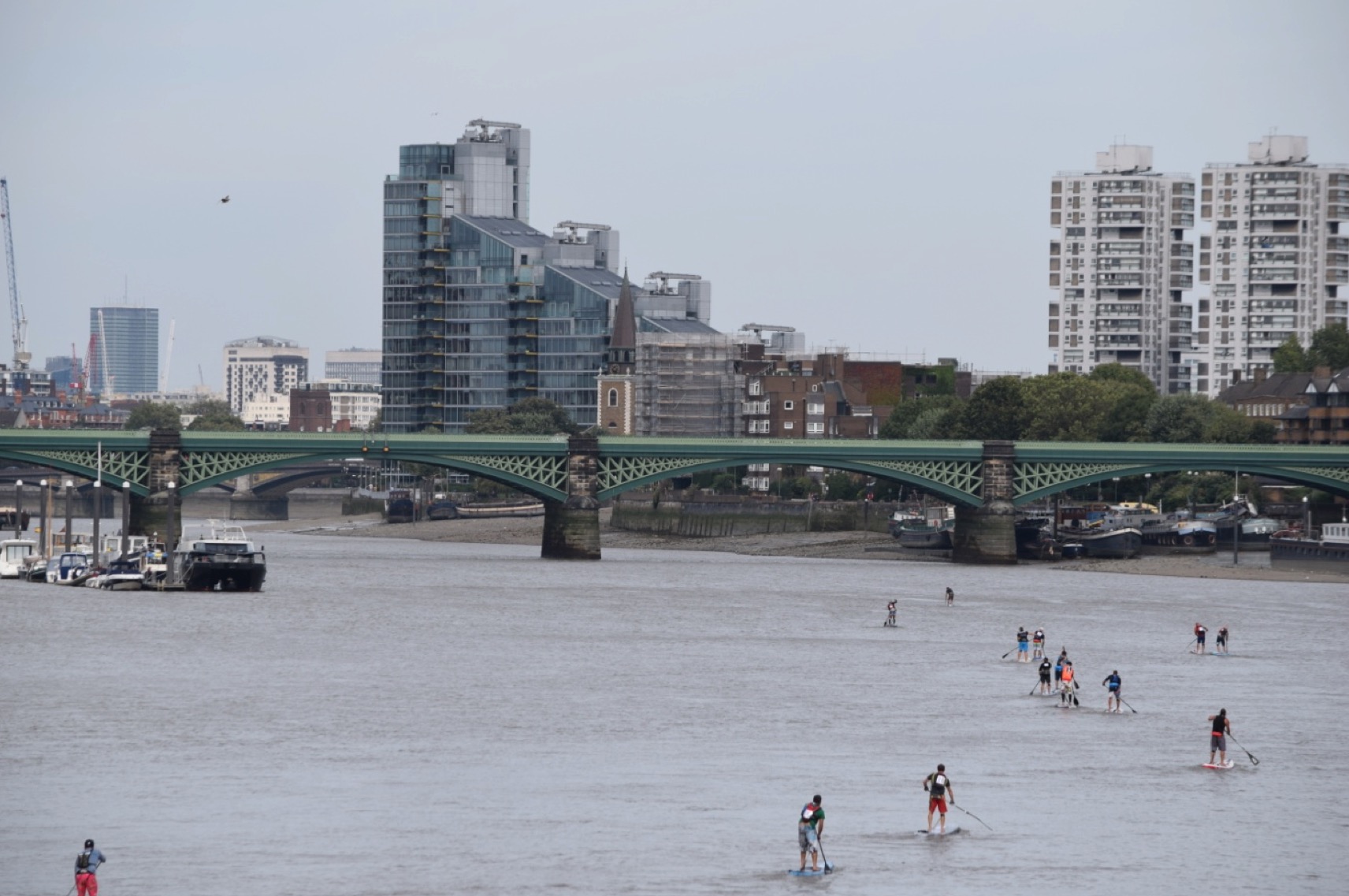 Passing more iconic sights than you could shake a London bus at it was quite a humbling experience and as we came to our turn point in front of the Houses of Parliament with the London Eye just in front of us the stand out moment of the race happened with Big Ben chiming for the half past the hour. Myself and Phil Plume even commented on it as we dug deep against the wind and tide attempting to make way. 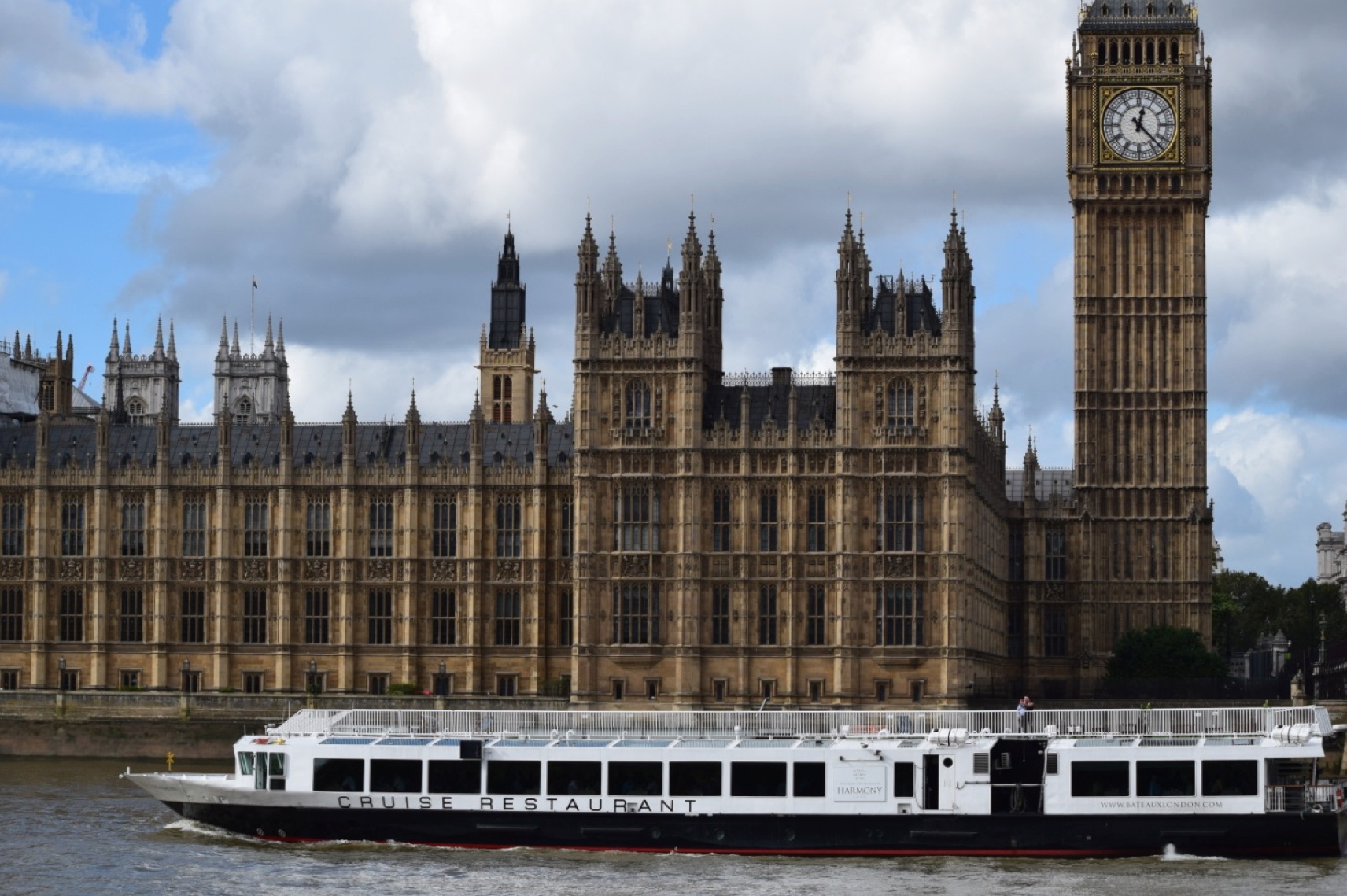 The next hour and a half + was up there with some of the hardest paddling I’ve had to endure. Against the wind and begging for the tide to finally turn we were paddling little over 5km an hour desperately trying to find sections of river with less tide to gain the edge needed. Although the leg back to Putney was slow it allowed plenty of opportunity to take in more of the scenery as we slowly ground our way passed. Places from 3rd-8th were hotly in contention and changing for most of the upstream section but Paul Simmons (1st) and Marie Buchanan (2nd) were always just blips in the distance. Adam and Furio battled it out and came 3rd and 4th respectfully to take home some decent prize money donated by Tideway London. Unable to keep them at bay I was piped over the line with a well planned sprint by both Mo and Sam, credit to their tactful racing. 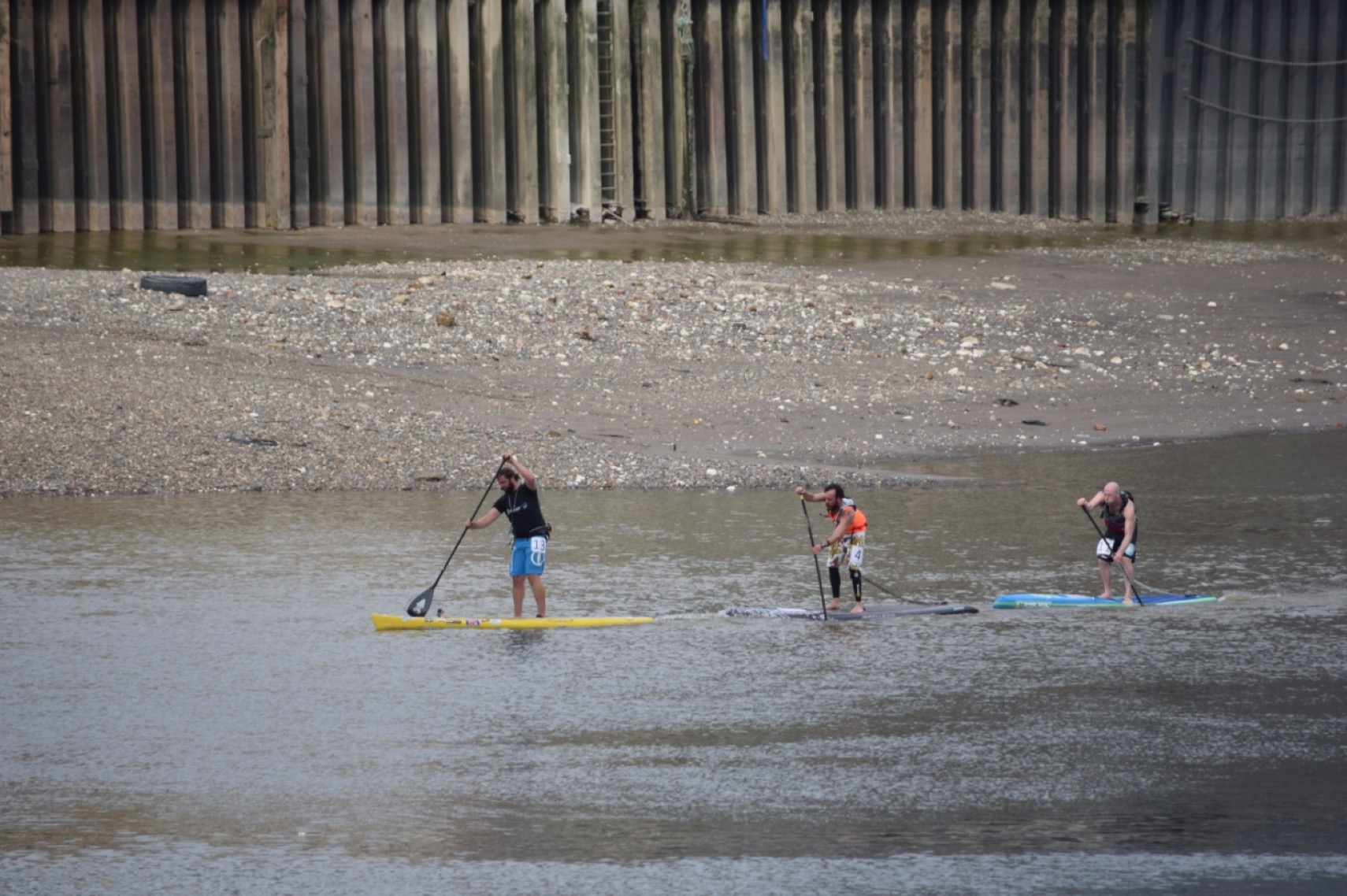 “Although absolutely shattered and with hands suffering worse than when I paddled the 11 Cities I was glad to be part of this race.”

Having looked at the River at high and mid tide the need for plenty of safety is well within reason but this certainly has great potential to be a massive international race and with plenty of impressive buildings like MI5, Battersea Power Station, Big Ben and the London Eye to paddle passed it should definitely be on the bucket list for paddlers all around the world. I’d just like to congratulate all those who took part, Active 360 and the volunteers who helped bring the idea to reality and getting the permission to let it take place. Tideway London for their support and sponsorship as well as making the Thames a cleaner place to paddle. I’d also like to thank #StarboardUK and #Tushingham for their continued support as well as #Onitpro for making my old board sleek and a continued contender and #Teapigs for their POWer Tea. As always thanks to you for reading and – See you on the water!

Paddling through the heart of London and seeing the impressive sights from a SUP is no doubt on many paddlers wish list. But as Crispin explained it’s no walk in the park! A strong river flow, tricky currents and boat wakes makes it a challenging place to paddle. But after a successful trial event this year hopefully more paddlers will be given the opportunity to take part next year, and it will become a major event on the SUP calendar in the future.

Hear more about the Big Ben SUP Race from Active 360 the event organisers soon on SUPboarder and for more information about paddleboarding in London on the Thames head to www.active360.co.uk.