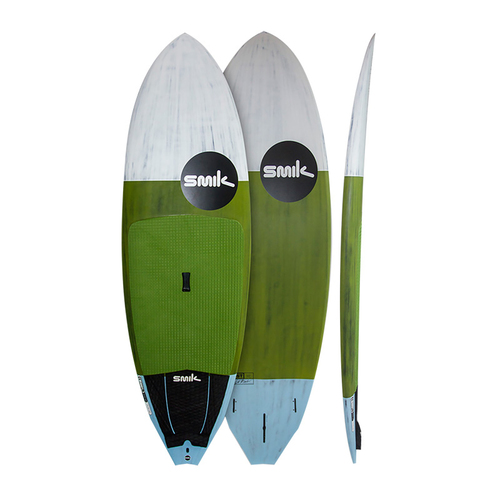 
On SUPboarder PRO we have head to head tested All Performance Surf and given test winner awards to help you understand whats best for you.

You can see the Head-to-Head at the link below.

The Hipster Twin is just a case of history repeating itself. It’s almost impossible not to notice the performance that’s evolved from twin fins in the surfing world, with many of the biggest brands having one in their range and all carrying the heritage of the original Mark Richard design.

It’s how it all started for us, a set of Mark Richard twins with a little nubster fin laying around and thinking how perfect a twinny would be for a SUP, helping loosen things up a bit.

With its fuller nose and moderately compact shape, the Hipster Twin allows you to go shorter with added stability and glide. It doesn’t feel awkward to paddle over large distances.

Mark Richards was onto something combining the hip in the outline with the 2+1 fin set up as it allows you to draw unparalleled tight arcs without letting go or losing speed.

The single concave feeds through a double and releases to a V out the tail to give a frictionless sensation of acceleration and drive coming out of a turn. Rail to rail transitions are some of the smoothest experienced, and the way the Hipster Twin feeds up the face makes everything seem easier.

It just feels like there’s a lot less drag, which equates to a sensation of speed. You really notice it when you put the board on rail and see it accelerate.

All of this results in longer surfs just because you’re just having way too much fun. It’s as simple as that.

SMIK hasn’t re-invented the wheel on this one, but we’ve done a pretty fine rendition of it.
_
Hipster twin V2

After extensive testing it was finally possible to find some subtle yet significant changes to the original Hipster twin which has proven so popular by all that have tried.

Still carrying the characteristics that made it so popular initially being a stable board with excellent speed and on rail turning capabilities, it’s just been ever so slightly tweaked.

Outline from the hip forward is slightly straighter to give more control in waves with more power. (Without detracting from its small wave abilities.)
Deeper double concave which reduces rocker in the middle of the concave while leaving the rail rockerline unchanged. (enhanced acceleration and speed)
Tail V has been moved further forward further enhancing it’s already remarkable smooth rail to rail transition and ability to project more vertically.

So whilst the imitators try and replicate the Hipsters success, SMIK raises the bar even further.

Based on 3 user reviews.

Kia ora, great test guys, been hanging out for it for a while. Nice sizing too, I’m 78kgs so they are right there. Love that Beau joined you too, one of the more flowy and rad surfers out there. Spent some time on those exact Smik and Fanatic sticks earlier this year, really liked both of them, and can fully relate to your comments about them. Ended up buying a Starby 7 10 x 28 blue carbon which I’m really happy with, quite techy to ride, you have to be on your game to get most out of it, goes… Read more »

hey Gary , Thanks for the comments and great to hear your feedback on how we can improve the tests. Smik.. Scotty hasn’t said of any changes in the shape to us to be aware of. I will drop him a mail and see what he says and get him to get back to you about that one. A 7’6 Smik would be a board that could be a real winner and I would love to have a go on one. I was only talking to Scotty the other day about how the needs some smaller Hipsters! Stability wise I… Read more »

I have the 8′ hipster. Good board for someone wanting to progress, easy to paddle & ride for an intermediate SUPer 55+ yo 83kg 5’11”, 2yr experience SUP, decades of prone surf. Slightly more stable than the Karmen 8’4″ 120ltr, much less stable than 8ft SB Hypernut, similar to the 9′ F-1 anakao, which is narrow & pointy. Build quality – too soon to tell. Surf – still getting used to it, but does what it says on the advert and suit’s my style more than the narrow pointy boards. Prefer to prone surf shorter, quad, hybrid, skatey shapes like… Read more »