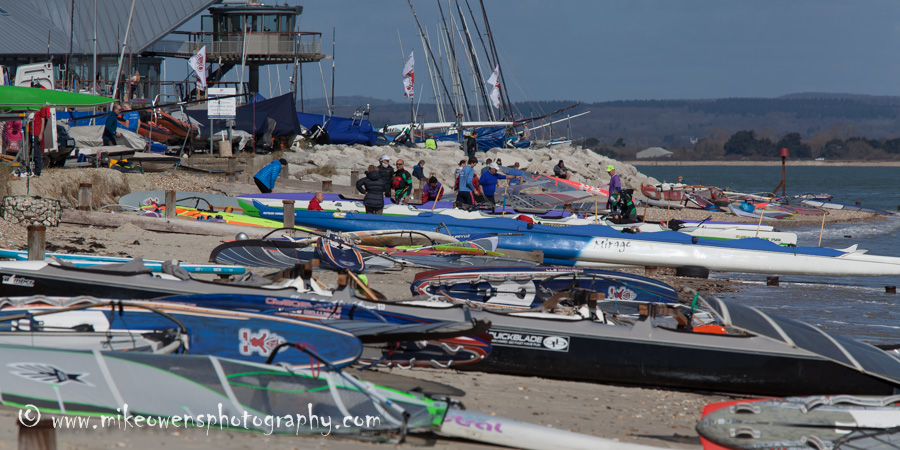 Records tumble at the 2016 Round Hayling Island Race

Just before midday on Friday 25th March, Hayling Island Sailing Club’s Principal Race Officer, John Rees, signalled the start of the 2016 Round Hayling Island Race. With fantastic Good Friday weather and the largest entry of recent years, over 200 competitors enjoyed a great day on the water.

The flat water and light winds early on, suited the paddlers, with Stand Up Paddleboarder, Paul Simmons smashing his previous record time by over nine minutes, Marie Buchanan bettering her own Ladies record by an amazing 15 minutes and the OC6’s slicing over 8 minutes off the record. The windsurfers endured a slow start, waiting for the sea breeze to make its mark, but this didn’t stop Rob Kent securing a record sixth consecutive win.

First off were the 14 Outrigger Canoes, with the nine OC6s powering away from the start line. The SailRacer GPS trackers showed Ali Collier and the mixed OC6 team from Paddlesports Racing Canoe Club, over 300m ahead after the first minute.   With flat water and favourable winds, the OC6s were nearly hitting 9 kts.

The next start saw the 60 strong windsurfer fleet head off, but a dying breeze from the North, meant that speeds were typically under 3 kts. John Pete from Bartley Sailing Club (Birmingham) was the first to escape the start line melee and get into clear air. But it did not take long for multiple winner, Rob Kent to work his way to the front of the fleet, hitting over 7 kts after 3 minutes and heading out into the lead.

The final start was for the 60 Stand Up Paddleboarders (SUPs). Quickest out of the blocks was Susanna Rice, closely followed by last year’s winner Paul Simmons.

In addition to the full 14 mile circumnavigation, there were three shorter courses. At the turning mark for the 4 mile SUP course, local, Neil Letchford led the pack closely followed by eventual course winner, Paul Jackson-Cole from Emsworth.

With a dying land breeze the windsurfers were making slow progress upwind, with leading SUP, Paul Simmons over-taking Rob Kent at the front of the windsurfer fleet just off Northney, after 35 minutes (despite starting 5 minutes behind.)

The SailRacer GPS trackers were showing the SUPs typically doing twice the speed of the windsurfers in the early stages of the race.

The Bridge and Back courses for SUPs and Windsurfers saw Shane Van-Leeuwen (SUP) from Hampshire and Dan Lytton (Windsurfer) from HISC, early leaders at the turning mark as they headed back to the finish.

Close at the Bridge

At the Bridge it was a close battle between the OC6s of Bournemouth Men and Thor Harley’s all male team from OCUK, with these two boats already starting to build a healthy lead from the rest of the fleet. In the SUPs, Paul Simmons was building a good lead and already 150 m ahead of Mark Slater, Tim Harley and Philip Plume. Marie Buchanan was looking strong in 5th place and just 2 minutes behind the leader. Eight minutes later, the leading windsurfers passed the bridge, with an amazing 15 minute differential allowing for the fact that the SUPs started 5 minutes later than the windsurfers. The first windsurfer to reach the bridge was Chris Gibson, virtually neck and neck with Rob Kent as they shot under the Bridge. Annette Kent was close behind them, looking confident as she dropped the rig to clear the bridge. The traffic roared and some spectators tried to dash between the cars to watch the competitors appear on the other side.

The OC6s were first to the finish line, with the Thor Harley – all male team from OCUK smashing the record in 1 hour 41 minutes and winning “The Frontier Outrigger Canoe Event” Prize, closely followed by the previous record holders, Bournemouth Men. Nick Kethro took the Frontier OC 1 prize and Andy Trunks the Frontier OC 2 Award.

With a building sea breeze, the windsurfers started to make up lost ground on the SUPs, seeing speeds into double figures. Windsurfer Rob Kent stormed back past the SUP of Paul Simmons as the pair closed in on the infamous Hayling Bar and the final run to the finish.   Although Rob was able to take a record sixth consecutive win and the “Tushingham Round Hayling Island Challenge with Severne” prize, his time was a couple of minutes down on last year. Rob was followed by Paul Leone and Lewis Barnes. Annette Kent retained her ladies title, shaving 9 minutes off last years achievement.

Paul Simmons in the SUP “Round Hayling Island with Starboard” managed to knock an impressive 9 minutes off his previous record for the 14 mile circumnavigation, and finished 2 ½ minutes ahead of second placed, Mark Slater. Marie Buchanan finished in 4th place and as the first lady, with a time of 2 hours and 38 minutes.

Over on the Chichester Harbour shorter courses, competitors were arriving thick and fast at the SUP Company finishing line. Dan Lytton took the bronze fleet title in the “Tushingham Round Hayling Island Challenge with Severne” for the windsurfers. For the SUPs, Shane Van-Leeuwen won from 17 finishers over the nine mile course and the “Bridge & Back with Red Paddle” Trophy. Several of the SUP fleet had opted to complete the 9 mile rather than the 4 mile course, which was a fantastic achievement. Paul Jackson-Cole took the “SUP Company Bridge Challenge” for the four mile course and was joined by several novices who had done brilliantly in their first event.

A packed prize giving saw over £3,000 worth of prizes awarded and some fine trophies, thanks to the support of sponsors : The SUP Company, Tushingham, Red Paddle, Starboard, Severne and Fullers Brewery.

SailRacer GPS tracking replays can be seen at the event website

The full results from all the events, SUP, windsurf and outrigger can be found here

For many, Hayling is considered the spiritual home of windsurfing, and the Round Hayling Island Race is a great celebration of the sport.  First staged in 1980, the 14 miles circumnavigation can take anything from 60 minutes to 6 hours. Recent years have seen the inclusion of Open Canoes and Stand Up Paddle Boards (SUP).