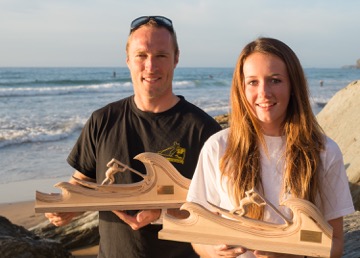 In confirming their entry, the stage is set for an amazing competition in the Open Men and Open Women, with both Matt and Holly are not only aiming to retain their titles, but with it winning their third consecutive BSUPA National Surf Sup Title.

However standing in their way is a very competitive fleet of both established and new competitors ready to take their respective crowns, and also the exclusive trophy of Watergate Bay Waterman or Watergate Bay Waterwomen. Presented by Watergate Bay Hotel. The winners also receive dinner for two in the Beach Hut, situated right on the beach, and over looks Watergate Bay.

Richard Marsh Event Director commented: “Year on year we see the level of competition increase, and this year will be no exception. However with the added spotlight on our current champions and history in the making, all is set for a great weekend of competition”.

Now in it seventh year, these championships remain this country’s Premiere Surf Sup only event. Finalists in both the Open Men and Open Women Competition will be legible for team selection to represent Team GB in next years ISA Stand Up Paddleboard World Championships.

British Stand Up Paddleboard Association, are a non-profit sporting association, established to promote a positive awareness to the sport in the UK and abroad, through its professional training program and competitions. www.bsupa.org.uk