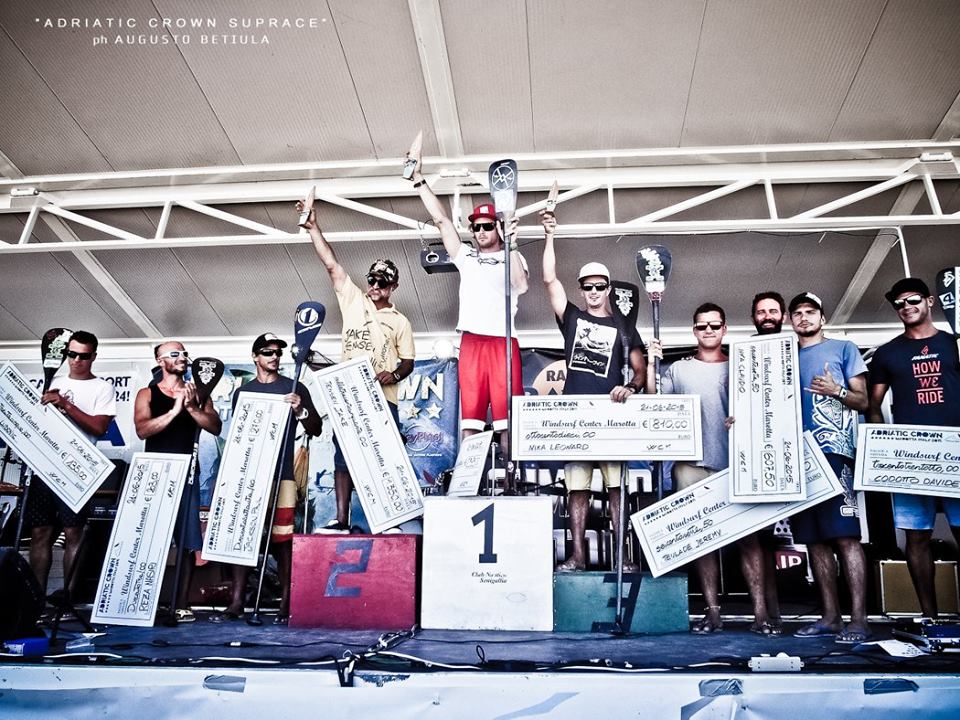 An all star line up headed to the Adriatic Crown race on the 19-21th June in Italy. Part of the Euro Tour this event for the second year running was a great success, even if the weather wasn’t on its side!

The second successful edition of the Adriatic Crown has just ended.
The weather certainly didn’t help, but at the end of the game, it honored the race with two sunny days and fortunately only on Friday night, the opening “party” event of the windsurf village, was cancelled.
A two day competition, long distance and beach race, to see who would be the winner of the Adriatic Crown 2015, a lap of the EURO TOUR SUPAA circuit and valid for the Italian Fisurf ranking.
The entire Italian sup “troop” was ready to battle with first-class “outsiders” like the Australians: Jake Jensen, Paul Jackson, Angela Van Hoof Jackson, the terrible and fast French brothers: Jeremy and Ludovic Teulade and the Slovenian Manca Notar, always at the top of charts.
The Australian team, “thanks” to transportation problems, got to Italy without their precious luggage……their boards!! and this was the first problem that arose, but thanks to “team spirit” among athletes, it was quickly solved.
On the first day of competition the sea conditions weren’t the best and the 12km long distance race, had to deal with waves ashore and annoying chops along the race course requiring a second thought, as to which board the athletes were going to use.

In fact, Jordan Capparella had to use his 12’6 ” instead of his faster and a lot more appealing but unstable 14’ board.
The race began, men first and women following.
The race was a struggled one with the victory of the great Paolo Marconi, author of a memorable performance over Leonard Nika, unopposed king of the Italian charts and always at the top of the worldwide ones. Third place went to the Australian, Jake Jensen (No. 5 on the worldwide rankings) a little disappointed for having suffered the chop while returning.
On the women’s side, the fastest of all, Angela Jackson cut the finish line first, followed by a young Manca Notar and “our” charming Susak Molinero.

Saturday’s race ended and it was time to relax and party.
The next days beach race would decide, by summimg up the two day race points, who the winners of the 2015 Adriatic Crown would be.
But on Sunday morning the organizers and paddlers arose to a bitter surprise…. the competition course was really tricky and difficult. The wind “Bora” was blowing spitefully and had raised considerably high waves creating difficult conditions more appropriate for a wave race than a race.
The athletes are in doubt and the course is at the limit of viability. The race director, Lorenzo Piergiovanni, decides to call a meeting with the athletes and questions their opinion deciding, at the end, to change the course of the race.
The buoys are positioned as far as possible from the “breakwater rocks” and the direction of navigation is reversed as to take advantage of the downwind, but being obliged to pass through secure and wide openings, the competition course increases in length. But first and most important of all…. the safety of the athletes! No one has to get hurt or take chances!
The women’s meeting is gathered and with a show of hands they opt to perform only one lap of the course, instead of the two planned.
The amateurs and children’s race course is also varied to a shorter and safer one.
At 11:40, only 10 minutes later than the official “starting time”, the race begins with a new race course ready for its athletes.
Jake Jensen wants to redeem his position and is absolutely at ease paddling through the waves, taking maximum advantage of the nasty sea conditions .
He cuts the finish line first, followed by Paolo Marconi, who doesn’t want to give up his conquest, and Leonard Nika is third.
It’s the brilliant Manca Notar, in the women’s race, who remains ahead of Angela Jackson and Susak Molinero.
At the end, adding up the points of both races, the winners of the 2015 Adriatic Crown are: Paolo Marconi and Angela Jackson.
Congratulations to all the athletes who struggled in the difficult sea conditions without giving up a second, with waves that were solely the joy of those who had wave boards and enjoyed the breakers and delighted the audience at the beach with bottoms and cutbacks!
The organization wishes to thank all the riders who “battled” it out in very difficult conditions, absolute “WARRIORS”!!!!
The main sponsors: Fruttonero e Lucyplast that made the event possible and Windsurf Center Marotta’s staff, who gave their best to make it all happen!!