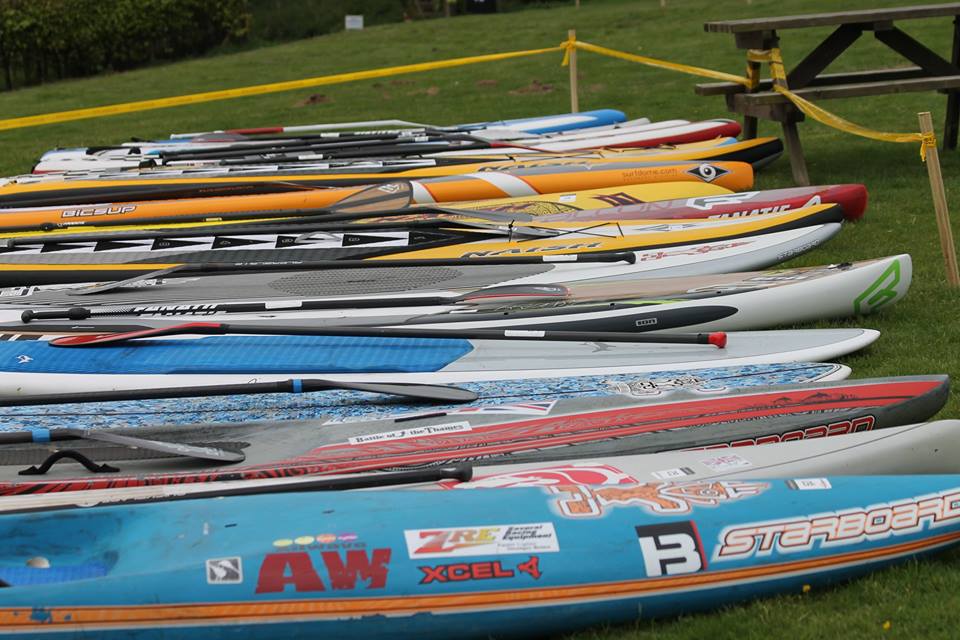 On the 17th May the first of the #SUPBIKERUN events was held at Wimbleball Lake on Exmoor. The weather was perfect with light cloud cover, light winds, and warm enough for both competitors and spectators to enjoy the outdoors for the day. There were competitors of all ages and abilities getting involved… some SUPers, some bikers, some runners and some obvious triathletes! Some there to go hard, and others just aiming to complete the challenge set. Whatever their goal, there were lots of smiles to be seen crossing the finishing line.

The SUPboarder team were there soaking up the atmosphere and taking part, to see what all the #SUPBIKERUN fuss has been about. SUPboarder Co Founder Will Rogers decided to dust off his running shoes, oil his bike chain and get involved too! Find out what SUPboarder and some well known SUPers and industry names thought about this unique event…

“Hands down a great event! A super relaxed atmosphere, slick organisation and a tough challenge put a HUGE smile on my face by the end of the day.  I went in green, and didn’t know what I should expect having never considered putting myself forward for a triathlon before.  But I DID IT and the emotions I experienced really surprised me.  What struck a real chord with me, is this didn’t feel like a race, I didn’t feel under pressure to get to the start line at the right time, I just started when I felt ready.  During the stages everyone out there on the course was helping everybody else get through to the end – words of encouragement from the runners when my legs were suffering at the end of the mountain bike undoubtedly got me through it – its a personal challenge but we were all in it together! 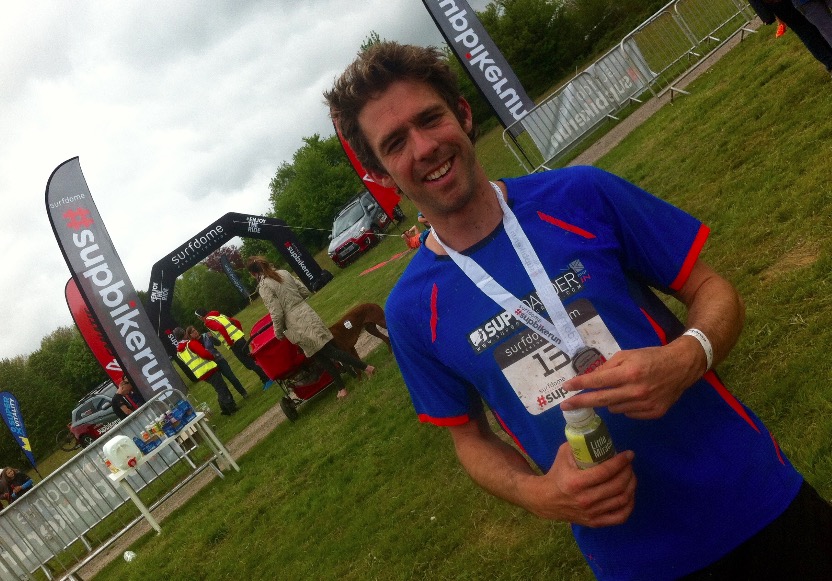 What’s even better is I’m still living my SUPBIKERUN experience after the event. Access to not only my times but a video of me finishing online has got me inspired. I can see which disciplines I was weak in and there’s a little bit of me that wants to better my performance next time. The SUPBIKERUN concept is a great addition to a plethora of triathlons out there. Something slightly different and I would recommend anyone to have a go, particularly if you enjoy SUP and the thought of a traditional swim perhaps puts you off traditional triathlons. So get your ‘SUPBIKERUN on’ and try something new this year!” Will Rogers

”I entered SUPBIKERUN because I liked the concept of combining the SUP, off road cycle and cross country run into one event. The SUP section was ok for me, but my legs didn’t seem too keen on the cycling part of the challenge, then they tried to go on strike altogether at the start of the run! I found the event itself very well run with a pleasant, relaxed atmosphere.” Mark Slater / Fanatic paddler

I grabbed a flyer for the supbikerun event series at the Head of the Dart race and quickly entered #2 at Wimbleball lake, Exmoor. It appealed to me as a keen stand-up paddle boarder who used to dabble in Triathalon but wasn’t very good at swimming-perfect!  The SUP wasn’t the main bit of the race, as always in Triathalon, it’s all about the bike determining who crosses the finish line first, but it seemed like a fantastic way to combine a SUP race with a day out exploring beautiful Exmoor.
The event seemed really well organised with regular emails in the fortnight leading up to the race with details on logistics. For anyone who has done triathalons before you will appreciate there are always a few logistics, throw in a board and a paddle and there are even more! But, the surfdome team had it all under control and there was someone to meet us on the beach at the end of the SUP leg and take our boards to a safe area.
The race worked purely on a times system with no mass start which the more competitive of us found to be a  bit of a shame! However, it did open the event up to many more athletes had not done much Paddleboarding before and just before I headed off I saw a quick SUP lesson going on near the start line for some first timers. The venue lent itself to this perfectly-an enclosed lake with plenty of safety on hand if needed.  That said, a race is as competitive as you want to make it and despite having no-one to race against directly I still wanted to finish the 3k SUP as quickly as possible, not least to put distance between myself and my friend Alex Durran who I knew to be a demon on the bike!
The course was a simple elongated triangle with a launch (included in your time) from the beach, so nothing too technical but a bit of a battle into a head wind on the way back up the lake. There was no fighting round the buoys as there were few paddlers on the water at one time. Off the SUP, run up to the bike transition, quick change of footwear and ready for the next 25k leg…
It was a beautiful ride around the lake then up through forest and across moorland with very little road. Hard work and slightly technical in sections which made it really fun! There was only 1 water stop but that was well positioned at the high point of the course so worth the wait! I was however pleased to get off my bike at the end of the 25k and amazingly my legs still worked for the last stretch, a 5k run.
It’s obligatory to sprint through the finish line regardless of how tired you are and there was a good reception from the organising team plus my support team consisting of baby Sam (aged 14 months) and my friends Mum who had kindly entertained him for 2 hrs 45 minutes!
My friend came in a few minutes later…so mayb it’s not all about the bike and I’m glad I pushed it on the SUP section.
It was a great day, well organised, and a great venue with awesome waffles to eat at the end too. For me it would have been made better with a mass start and more commentating or at least results and prizes to draw all the competitors together at the end of the day, but maybe the format as it is encourages participation by all. If you’re a keen SUPer come and try it…you can get ahead on the water and beat those triathaletes ;-)!  Anna Shekhdar WeSUP paddler

“I’ve never considered competing in a triathlon before as never saw myself as a ‘triathlete’ and have never been the strongest of swimmers! When I heard about the SUPBIKERUN events I must admit it was the SUP element made me think it was something I would be able to do and enjoy as I SUP regularly and have this year started competing on the UK series. I’m not going to lie, the SUP part felt pretty easy as you’re feeling fresh, however the event itself was probably the hardest thing I’ve ever done as my legs were like lead on the run after a ridiculous amount of off road hill climbs. So worth it though as feels like such an achievement. I was also really pleased to see how many women got involved – so many! I think the SUP element of the race brought a real variety of people to the event and made the atmosphere amazing, and very relaxed. If you think you can’t do it you definitely can!” Bethany Mercer / JP Australia paddler

Check out the Wimbleball event video check below;

“The event was really good fun, it was a really relaxed atmosphere. With the SUP being my strongest out of the three disciplines it was a very easy 3k paddle. I wish the SUP was a bit longer and the bike a bit shorter. You can’t gain much time on someone on a 3k SUP however you can on a 25k bike! However it’s good as it shows you which discipline is your weaker and hopefully will make me train harder for the next event and push the leaders off the top spot. I thought the event couldn’t have been better organised, looking forward to the next one.” Jay Haysey / JP Australia paddler

”What ticks the boxes for me are; starting when you want, racing against yourself, encouragement from others either when you cross or even when you’re overtaken, slick organisation, location, and the combination of the three events. With regard to the three disciplines, racing SUP is definitely more scenic and interesting than swimming, while mountain biking is I think more of a technical challenge, giving the added thrill of pushing oneself closer into the danger zone, rather than just a full on lung buster on the road. Then for me the run, it gets my body back into sync, although it takes almost the full 5km to do so.” Dee Caldwell / O’neill Wetsuits
“The SUPBIKERUN triathlon was always something I had my eye on from seeing the first event last year, I couldn’t attend that one due to work commitments but when the series was announced there was no question.. I was in! Without doubt this is the most fun and challenging thing I’ve done in a while outside of the main SUP events. For me I went in having no expectations just to have fun but as a competitor it was nice to finish well and the overall event was run brilliantly. Combing SUP with mountain biking and trail running is a fantastic idea as each of the sports compliments the others perfectly. Not only that but it attracts a variety of people, and throughout the day it was a great opportunity to meet some new faces and hear their story. If you have even considered one of the next two events I would without a doubt say you wont want to miss out, its an awesome day and a fantastic, fun challenge. See you there :)” Scott Warren / Starboard UK
So there you have it, straight from the SUPers mouths. #SUPBIKERUN… a really well run, fun and challenging event, that has something for everyone. With a leisurely start, and a feel good atmosphere that doesn’t necessarily have to be competitive, you really can make the day yours, and just enjoy a day of fresh air and SUP, bike, run action in beautiful surroundings. If you missed out on the first event, don’t worry it’s not too late to get involved as there are 2 more events planned for this year in 2 more stunning locations. You won’t be disappointed. We look forward to watching this event grow and seeing more SUPboarders take on the challenge. With such positive feedback it will no doubt get bigger and the participants will get faster!
Find out the full event results here.
To find out more about #SUPBIKERUN and their future events check out their website and Facebook page.