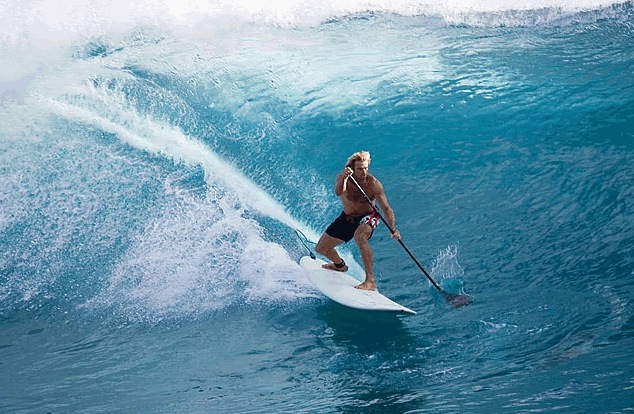 The beach boys of Waikiki are credited with the introduction of stand up after sweeping the Waikiki line up of the the 50s. Although many of those early legendary watermen kept up their paddling antics it wasn’t until years later that it started to become more main stream. Fast forward through the next four decades and eventually you arrive at the point SUP truly landed.

Back at the turn of the decade Y2K saw an extensive period of flatness hit the Valley Isle of Maui, Hawaii. Summer generally sees the famed north shore turn into a swell starved and breezy playground. The south side of the island does see a bit of juice but it’s rare to get a macking pulse.  When you’re a world class wave rider it stands to reason you’re going to get bored and need something else to occupy your time.

Maui summertime is when most big wave chargers get their fitness levels sorted – readying themselves for winter and the monster swells that pound the shores around Pe’ahi (Jaws). Without these tip top levels of conditioning, tackling such waves would be unwise.
Laird Hamilton and Dave Kalama hardly need any introduction. (If you’re unsure who these two pioneering watermen then search Google and all will be revealed). In efforts to spice up fitness training sessions Kalama and Laird began paddling their tandem surfboards in a stand up fashion. Using outrigger canoe paddles, the two found they could cover much more distance and give themselves a better work out than paddling prone.

Meanwhile over on Oahu…

Around the same time; Makaha surfing royalty, Brian Keaulana, Mel Pu’u and Bruce De Soto had the same epiphany. Once again, using double team surfboards, the three began sweeping around their local breaks, making the most of summer conditions in Hawaii.
In the blink of an eye, stand up paddle boarding came into full focus.

It didn’t take long for the surfing community grapevine to start buzzing and soon, SUP went viral, spreading across the Hawaiian archipelago like wild fire. When five ocean athlete legends are in the mix the general surfing population will always sit up and take notice.
The benefits of stand up paddle boarding are well publicised and these recognisable trend setters were quick to broadcast this. A core muscle workout, a different way to surf waves, a vehicle for accessing out of the way stretches of water and so on – SUP as a discipline is extremely diverse. The plus point were widely promoted – and still are to this day.

It wasn’t long before SUP was being pushed hard – promotion given at every opportunity. A key turning point for stand up and its global popularity occurred in 2004 when Brian Keaulana introduced SUP as a division during his father’s memorial surf contest – the Buffalo Big Board Makaha Classic.
Stand up proved immensely popular and drew a large crew of paddlers. The event garnered a huge amount of media interest and that was it – the seal broken. Word of SUP spread across countries and continents – stand up had officially arrived and it wasn’t going away.

As pioneering members of SUP Laird and co quickly improved their skills and began to demand high quality equipment. Unfortunately there wasn’t really an industry at the time, a fact which needed to be addressed.
The group were relying gear that wasn’t really up to the rigours and demands of SUP. Using OC paddles and tandem surfboards wasn’t ideal. Laird was reported to be regularly breaking large numbers of paddles in those early years.
Before long a cottage production line had sprung up around the shores of Hawaii. Outrigger canoe paddle craftsmen were diversifying their output and surfboard shapers were mowing larger blocks of foam – all to accommodate this new breed of ocean athlete, their wants and needs.

The first few years of the new millennium saw a different way of thinking for those who play in the ocean. The want to evolve and find new ways of tackling Mother Nature saw a group of progressive thinkers and highly regarded watermen adapt an old style discipline and make it their own. Had it not been for these first forays and experiments we wouldn’t be where we are today.
Stand up paddle boarding continues its surge forwards with new recruits taking up the sport on a regular basis. A multi-million pound industry exists; a healthy competition circuit is available in most countries; new blood continues to pour through the ranks demonstrating ever more progressive riding and SUP shows no signs of slowing down in its quest for global domination.

Had it not been for Laird, Kalama, Keaulana, Pu’u and De Soto then stand up would never have come back in from the cold. If you’ve yet to try SUP… now’s the time to emulate those Hawaiian heroes and stand tall.

To read ‘The defining moments in SUP part 1 –  How we got here’ click here.