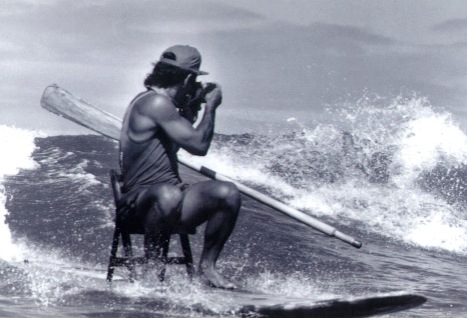 Pick any topic you like and throughout its history there will have been defining and iconic moments. Some pass stealthily by, drifting under the radar – only to be recognised at a later date, while others manifest themselves into big blinding crescendos of light that almost emulate the second coming. In both cases these event horizons can help define an era, sometimes a generation and in rare cases a lifetime. If we think music then we cite the Beatles’ formation as one such moment; football would be the ’66 World Cup; the Vietnam War; the invention of the first iMac personal computer; Andy Murray winning Wimbledon – the first Brit in 77 years to do so (get in!), and so on. The lasting effects of these events resonate with us still today and will do so for years to come. Stand up paddle boarding may be small fry when compared to the behemoths mentioned above but that doesn’t mean SUP has any less bench mark moments along its lifeline. In this series – Defining moments in SUP – Tez Plavenieks explores what brought us to where we are today within the world of stand up. From the Hawaii beach boys of the 50s to the awe inspiring big wave Sunset chargers of the modern day – read on for how you may have ended up as one who dabbles with a paddle.

Before we get fully into this let’s set the record straight – paddlers (loosely termed) have been standing tall and propelling their craft from this position for hundreds of years. Therefore pinning down the exact time, date and place of origin for SUP’s humble beginnings is tricky. The second myth to debunk is that SUP is an ancient Hawaiian ritual, which just isn’t the case. Captain Cook may have seen surfers riding waves but he didn’t observe 18th Century stand up paddle boarders – as some would have you believe… However, what we now think of as modern day SUP is credited as coming out of the Hawaiian Islands – in particular along the shores of the famous stretch of surfing real estate, Waikiki.

The 1950s was a decade of change for many of the world’s ‘yoof’. The end of the Second World War saw a boom in tourism and travel with many wanting to experience their new found freedom to the full.
Matson Cruise Ships were on a high during this period and regularly chugged into port to drop off thousands of revellers all looking for their slice of Hawaiian paradise. After being deposited under the shadow of the imposing Diamond Head it would inevitably be surfing that grabbed tourists’ attention. Lean, tanned and skilful young men deftly threading the needle along tropical liquid walls, all set to a back drop of swaying palm trees, blue skies and blazing sun – what wouldn’t have been attractive? Before long, ‘green’ thrill seekers who fancied trying their hand at the ‘sport of kings’ began taking to the waves. The now famous surfing strip of Waikiki became a thronging mass of legs, arms, flying boards and occasionally some out of town haole showing a degree of surfing promise.

Before the tourists arrived en masse there was a group of local Hawaiians who had grown up at the beach and were expert watermen, already making use of the Pacific surf. These ocean athletes were the direct result of Duke Kahanamoku’s (arguably Hawaii’s most famous surfing/swimming ambassador) influence and spending most days on the sands of Waikiki. Growing up feral at the beach; spending time fishing, diving, surfing, paddling outrigger canoes – the skill, knowledge and understanding the beach boys had in the water was unsurpassed. As the huge influx of tourists continued, the beach boys – lurking close by under the Banyan Trees – would gaze on with interest as these ‘invaders’ tried desperately to master the art of riding waves.

Time to get involved

As yet more visitors made the pilgrimage to the land of surf the sheer volume of tourists wishing to learn to wave ride was overwhelming. With the skills they possessed the beach boys were the logical group to be called upon to pass over their valuable knowledge and teach holiday makers the ways of Mother Ocean. If you were fortunate enough to have learnt the art of surfing, under the guidance of an experienced beach boy instructor, then you most likely would enjoy a fruitful surfing career having gained the necessary fundamentals and skills.

As already mentioned it’s difficult to pin down the exact points of who started sweeping around, standing aloft an oversized board. The generally held belief is that one of the Ah Choy brothers (Leroy or Bobby – both well respected watermen and members of the infamous beach boys) – were probably the first. After grabbing an outrigger blade they began paddling their large Redwood Hot Curl surfboards around the Waikiki surf break – teaching, providing water safety and taking photos.

Tourists by nature everywhere want to document their experiences while away on their annual holy bobs and the Hawaiian visitors of the 50s were no different. With surfing on cards the need for capturing the moment and proving they’d mastered the new craze of ‘surficin’ boardin’ was in great demand. Showing off to the boys (and girls) back home couldn’t be achieved without evidence. The beach boys were the perfect group to be entrusted with expensive cameras, when waterproof housing wasn’t readily available (there weren’t any GoPros in those days). Snapping away at the action from on high, paddling their large surfboards around – ala SUP, the beach boys were one of the first water photography crews.

Falling from standing, with an expensive camera in hand, would have meant the demise of the gadget and the loss of a tourist’s valuable holiday shots. However, put a beach boy on a plank that slides sideways and they can accomplish anything. Before long a large number of this ocean clan could be seen in the line ups of Waikiki and full frame shots of haole surfers were common place. Standing on the same wave as the beginner surfer the beach boy could capture the action and preserve the moment for posterity.

This new style of riding was referred to as beach boy surfing but essentially is what we now recognise as stand up paddle boarding. This continued right through the 60s and 70s but the wider surfing community never really picked up on the true merits or benefits of standing tall and a paddling a board.Some of the original beach boys, including John Zabatocky (now in his 90s) discovered surfing with a paddle and never looked back. Bobby Ah Choy, another Waikiki original, also continued to SUP right until his passing. Just weeks before he died in 2007 he made the final of a stand up event – not bad for an oldie! Even though the Waikiki beach boys might not have been the true originals of standing up and paddling, their antics around the shores of Hawaii are recognised as being the pre-curser to the more recognisable sport we now know and love.

As far as iconic moments in sport go, the Ah Choy brothers and their band of beach waifs and strays, looking to capitalise on the tourist boom of the 50s, is right up there. Little did they realise how their acts would later manifest themselves into a full blown recreational industry.

For more information about the legendary beach boys of Waikiki, who are still going strong today, check out www.waikikibeachservices.com