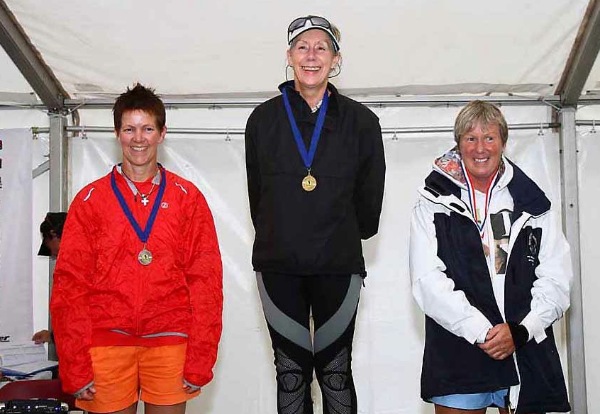 Living far from the sea in Beaconsfield, 62 year old Susan Jones who has marked osteo-arthritis of the hip was starting to think her watersport days were over. But how wrong she was! After discovering SUP during a recent beach trip Susan has managed not only to get back out on the water pain free, but also to become Women’s Veteran 12’6 winner at the recent BSUPA National SUP Clubs Championships at Eton Dorney. Here Susan tells her SUP story…

I have lived here with him for the past 17 years and agree with all of the above – except that something in me always wants to be near water and I would dearly love to live by the sea.

Some friends had bought a holiday flat in West Sussex and I took myself off down there to take a look at one for sale. All very nice but probably not for us – too expensive, too much upkeep, how much would we use it? Walking back to the car past a row of beach huts, I had my Eureka moment. Back home I googled ‘beach huts for sale’ and began to see where I could find one that would be accessible for a day trip to the seaside that I could do, even on my own.

The shortest route to the coast from here is down the A3.The notorious bottleneck at Hindhead was going to be removed by the tunnel under construction. Beach huts with a view of the Isle of Wight were for sale on Hayling Island. The plan was coming together.

It was when I was looking at the beach huts for sale on Hayling on a glorious October morning that I saw someone on the sea standing up, holding a long paddle.  Another Eureka moment. That looked like fun, much less stuff to manage on one’s own than sailing and kayaking, and something that maybe wouldn’t aggravate an increasingly painful hip? The local watersports shop was friendly and keen to show me all the equipment. Hire a board first, have a lesson, see if you like it.

Hooked already, back home I did some research and found that although Stand Up Paddle, SUP, was a relatively new sport in the UK, it was already flourishing on the Thames and on lakes not too far from Beaconsfield. At Bray Lake, I found the same inflatable that I had hired in Hayling. I bought the board and a paddle, joined the club and started going to the Sunday morning sessions, where I met lots of enthusiasts and began to improve my technique. I was delighted to find that this was something that I could do without pain. The osteo-arthritis in my left hip was getting steadily worse: I’d given up golf and could no longer run even a few steps to catch the pedestrian lights. Walking was becoming more and more uncomfortable and I had developed a limp.

SUP on the other hand was non-impact exercise, great for balance, core strength and stability.

However, the sessions at Bray Lake were not just about looking good while paddling gently round the lake looking at the wildlife. As in any sport, people want competition and SUP racing was a monthly event.

Inflatable boards are very manoeuvrable but not fast, but I didn’t mind. I enjoyed taking part in the racing even though I was never likely to win. It was great exercise; sprints for cardio and longer distances for endurance.

Then the news broke that the British Stand Up Paddle Association (BSUPA – what a great acronym, “Be Super”!) was organising the first ever National Club Championships at the newly re-opened Dorney Lake. All were encouraged to participate as this was to be a demonstration event as part of the Berkshire Games. Races were by type of board and age category and I was determined to participate at this iconic Olympic venue. However a 10’2 inflatable was not the board to do it on. So began the process of selecting a race board. Two or three evenings a week were spent trying different makes and models of hard boards. My right hip (the good one) was black and blue from carrying them into and out of the lake. I was also improving my technique, training hard, pushing myself, and the osteo-arthritis gave me no problems at all.

I entered the 6 kilometre race in the 12’6 board category, women’s 50+ ‘veteran’ age group (I am 62). The day, August Bank Holiday Saturday, was wet and windy but the turnout was great: 14 different clubs participating; 70 men and 28 women in the 6km, 23 men and women in the 4km race and 7 under 16s in the 1km race. My principal aim was to complete the race, particularly given the rather inhospitable conditions and the course itself – 2km up the recovery channel against the wind, back down the main lake to the start, round again upwind, under the bridge at the 1km mark and down the lake to the finish. It was my first race outside of Bray and my first 6km distance. I did it.

The team events took place in the afternoon after a delay due to thunder and lightning. l stood in at the last minute for someone who had had to leave. Four members in each team in a relay using one board, starting waist deep in the water and jumping off after completing the lap, in my case disappearing completely under the water. I did the lap and didn’t fall off on the way round. Great fun in the pouring rain, if slightly manic.

Finally time for prize giving: medals and a proper podium. First, second and third by board category and age group, one by one. Finally Women’s Veteran 12’6, and the winner is… Susan Mary Jones.

Rather wet and bedraggled in the photo but I don’t care. I am just so thrilled to have done it, I intend to keep on doing it and I hope to spread the word that SUP is a great, growing sport in which even a senior citizen with a bad hip can complete and win. And even if you don’t want to race, you can still paddle round the lake or along the Thames and look at the wildlife…