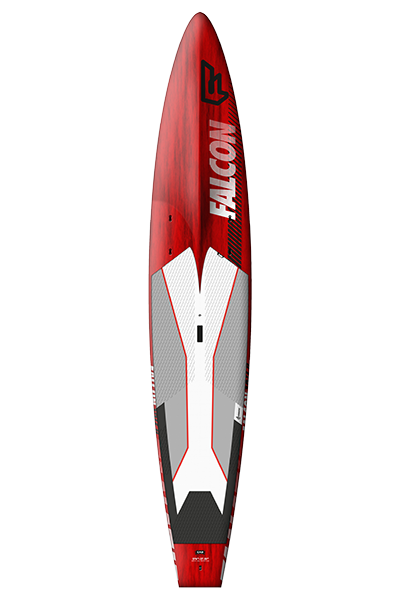 The Falcon lends itself to one thing: Speed. This winning design that has taken 2013 Vice World- and ISA Champion Angela Jackson across finish lines at lightning speeds, has been enhanced for 2015.

It is also the SUP of choice for team riders Jake Jensen (3rd SUP World Series Overall 2013), Olivia Piana, Arthur Arutkin and Paul Jackson, who dominate in international competitions across the globe. Made up of two brandnew designs and four modified shapes, the Falcon is faster and more stable than ever. Reducing the height and angle of the deck spine in the nose, enhances the aerodynamics of the board. The smooth bow design ensures that the nose never dives or develops any self-steering. Following along these lines we have an optional increase to 29.75 cm in width for both the 12’6″ and 14’0″, thus making the Falcon more adaptable to your racing preferences.

With the already internationally established SUP race scene still rapidly growing, Fanatic has injected a huge amount of effort developing and fine tuning four adaptable models and two brand new shapes in the 29.75″. The 12’6″ sees the elimination of the cutting bow and integration of a round, domed profile for our new non-catching design. The flat angled deck is shaped for a secure, solid stance and efficient water dispersal. The 14’0″ sees a drop shape pintail outline with increased nose width and volume. A smooth tail and nose rocker combine into a continuous curve accentuating clean water
release in paddle motion.

Our innovation has seen volume being pulled all the way to the rails which, combined with the sharp release edges in the centre, creates mind blowing amounts of stability allowing us to reduce the overall width, which is paramount to riders when racing.

Extensive testing was conducted worldwide to ensure the new shapes perform outstandingly in all water conditions. The Falcon’s ability to cruise over choppy ocean swell without interruption of speed is faultless. Special attention was paid to establish straightforward, easy foot steering in cross-wind and chop. With the wind behind you the Falcon truly comes into its own, magically rising out of the water as you gather speed, with furtherer acceleration down the face, and then flawlessly up and over the next wave.

The SUP Race fin has a new outline concept and more rake to avoid catching weed. The slimmer profile provides better dynamics and efficient water flow. Light and stable RTM technology with new sizes of 19.5 cm and 22 cm make sure each Falcon is matched with the perfect sized fin. Developed by our Australian R&D crew in cooperation with Choco Fins.

The ultimate performer in anything from flat water, to chop and epic downwinders. The Falcon will get you there first.