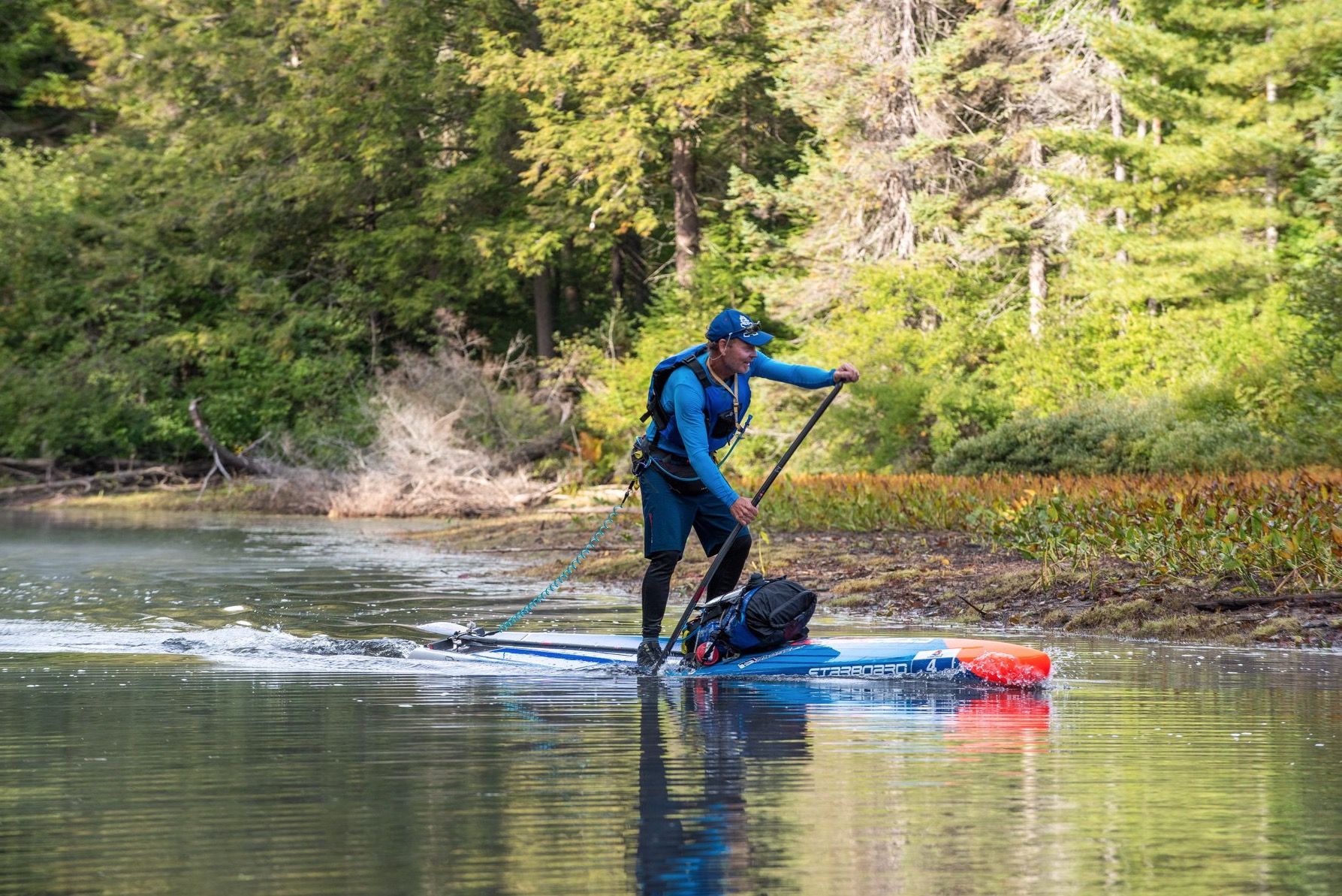 3 ultra distance races in 3 weeks, covering 500+km. That’s the challenge long distance paddler Bart de Zwart has set himself this month. Bart has successfully completed two events but still has one to go!

The Muskoka X Recap which takes place in Canada it always a gruelling event, but this year due to the challenging head winds and weather it was extremely tough. Only 20 out of 68 teams finished the race, with Bart being the only SUP (which says it all!). After 32 hrs of paddling, Bart shares how he found the mental and physical strength to battle through the elements to the finishing line…

“Not your typical stand up paddle race! But an adventure where map reading skills are critical and mental strength even more.”

The Muskoka X recap… The X in this race stands for (at least for me) – You never know what you gonna get! This was very true for this year’s race. There are three options to do this race… the Sprint 58km, the Classic MRX 130km and the Coureur des Bois 223km.

I choose to do the Coureur des Bois the two day version of this race, which on the 2nd day joins the MRX and Sprint version. This is traditionally a Canoe race but also an adventure race because you can only use maps and compass and have to find your own way through the lakes, rivers and portages (a way over land to get past places where you can not paddle, like waterfalls). There are 38 portages in this race. This means you have to put your gear in your bag and the board or canoe on your shoulder and walk or run and find your way through the forest or path to the next entry point into the water.

To say the least, not your typical Stand up paddle race! But an adventure where map reading skills are critical and mental strength even more. On top of things you have to bring mandatory gear to make it through the two days – gear to eat, sleep and stay alive. It is essential that you keep this gear to a minimum, because you have to walk around with it, but at the same time you need enough food, as well as warm and dry clothing to make this race. There is no outside help allowed. 68 teams showed up at the start of which only 6 stand up paddler racers. Only 15 teams raced the full two day course. With the two day course you paddle for around 12 hrs to get to a campsite where you have to make your own camp and eat what you brought in your pack. 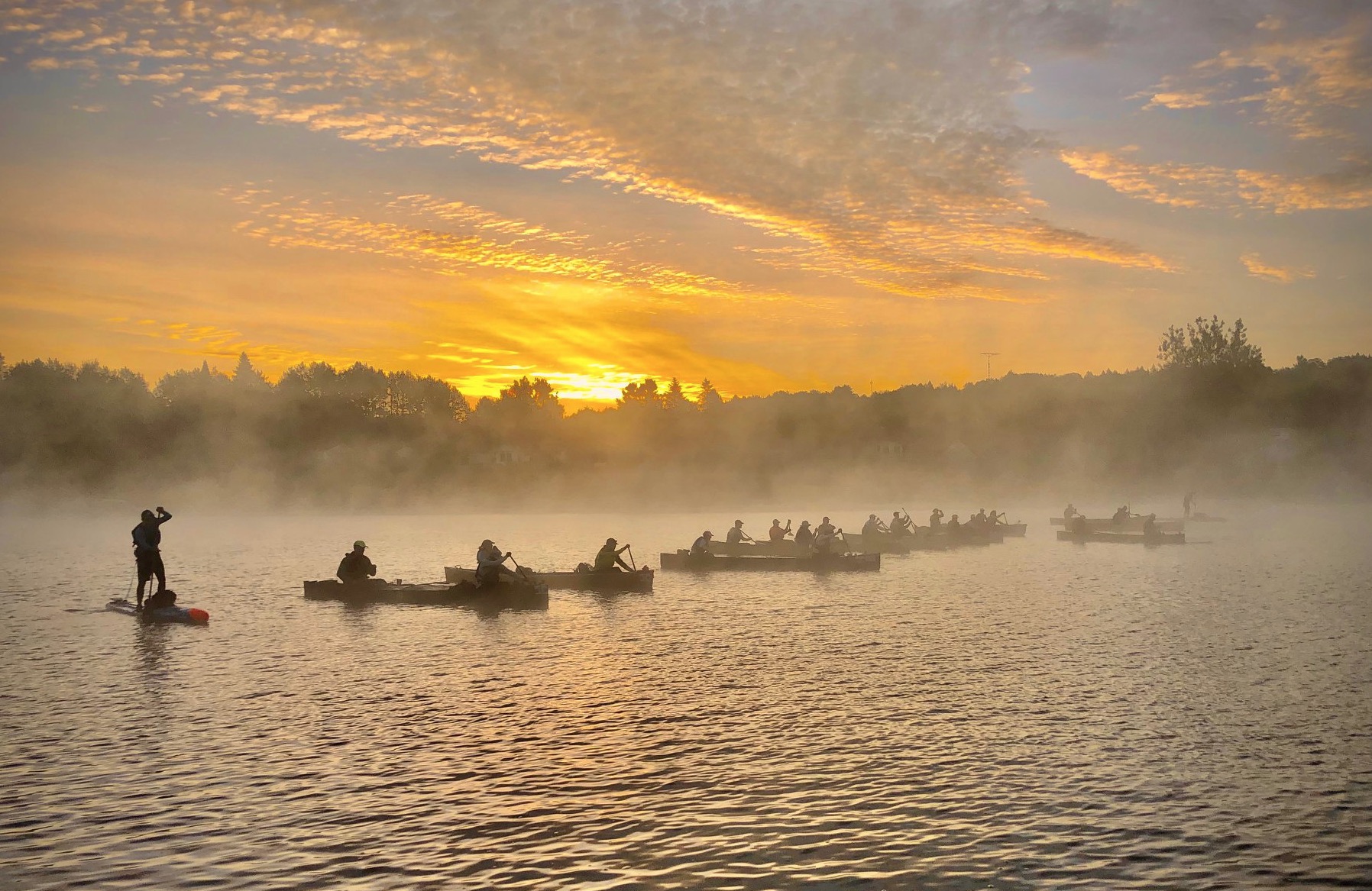 We started at 7 am in Witney in the Algonquin Park in the fog. This year the fog was not too bad and we could see the other side of  the lake. We have had years where some teams lost their way in the first hours of the race because of the fog. My goal was to get in at the campsite before nightfall which would mean that I didn’t have to do any portages in the dark. A portage is not easy during the day, let alone in the dark. It is not easy to find the start of the portage and sometimes very hard to find the path when it is dark, so we try to avoid that. It started out with very nice weather, sunny and a light wind from the back. Everything was going well. I had a good pace and was in a good position even compared to the faster two man canoes.

I was using the All Star 14 x 24.5. For me the board of choice because of the volume and width  –  you bring plenty of gear and it is still very fast.

We were warned that this year the water was extremely low. I use a Black Project G10 fin because G10 is stronger and you can sand it to make it like new again, if you hit a few rocks… and I did hit many, many rocks this time. The river was very shallow in many places. We had to watch out not to get stuck and fly off your board head first in the water or break off a fin. (I always carry a spare)

After 6 hrs of paddling, even with the low water I was still doing a good time, but the wind started picking up and dark clouds started to come in. The rain started with a drizzle, then it became a pour. My most important piece of clothing is a very good @GoreTex jacket. Staying dry and warm in a race like this is essential. Paddling on the river is sometimes a never ending amount of bends left and right, making the river a lot longer than it looks on the map. A few times the river got so narrow and small and so low that I asked myself if I totally misread the map and got lost. By 5 o’clock it looked like it was already getting dark. The clouds were so thick that it took a lot of daylight away. The campsite was still far away. 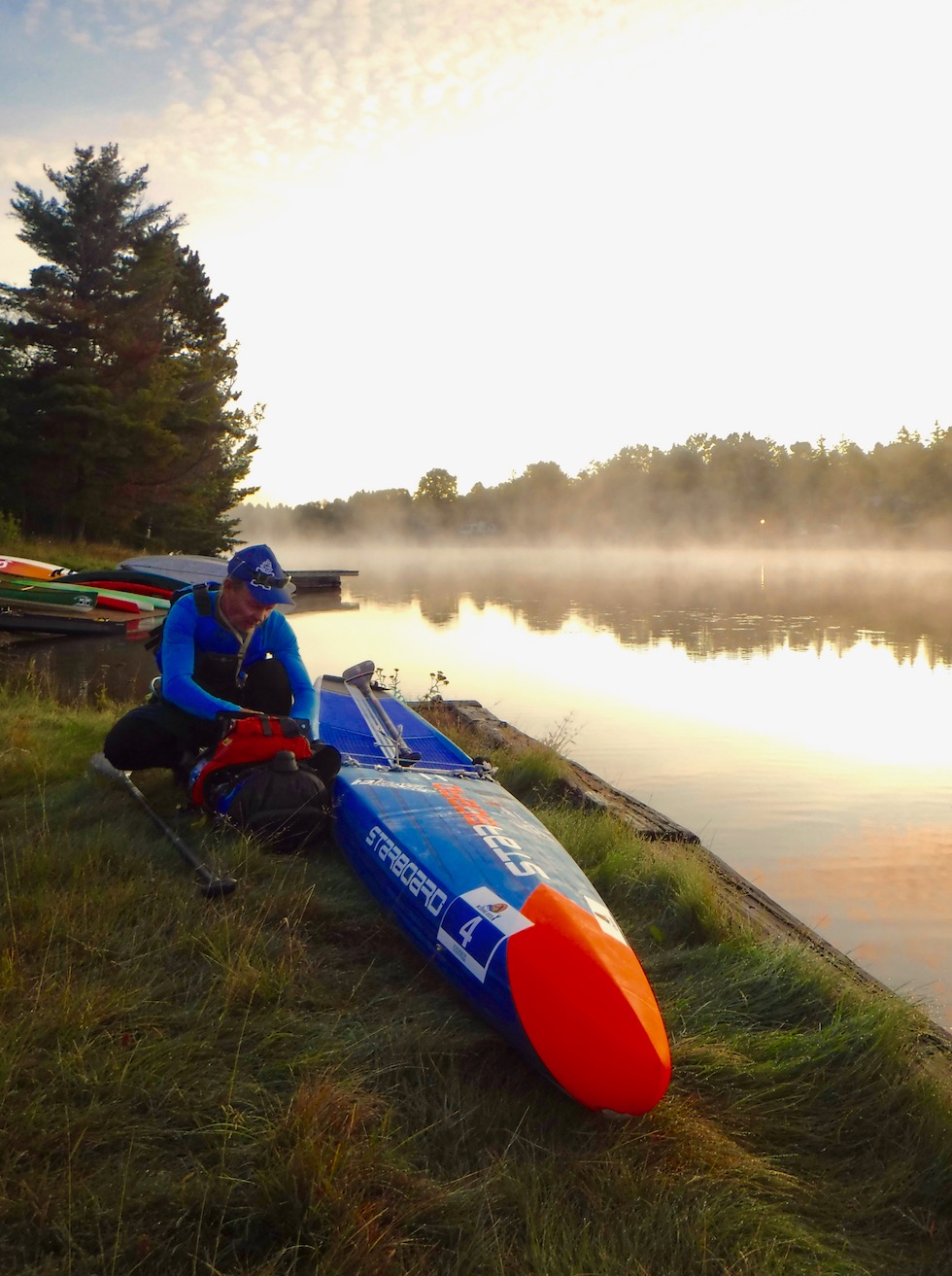 Focussing on racing you sometimes forget that you are paddling in a beautiful place, in a National Park, in a great country. I was reminded by that when a moose swam across the river right in front of me. You only realize how enormous they are when they get out on the dry on the other side. Beautiful!

I had seen only two other canoe teams close to me during the day but when night fell, and it started pouring rain, with lightning and thunder in the distance, I was very alone, finding my way in the last portages.

My head light didn’t help much because the rain reflected all the light. I did find my way and came in at 9pm after 14 hrs of paddling with the lightning getting a little too close the last kilometer. I came in like a drowned cat, wet and cold ready for a good meal and sleep. I found some shelter and my good friends in the 2-man canoe, dad Paul Adams and son (15yrs) Isaac came in ahead of me. We traded stories while making our dry-freezed meals, eating as much as we could. Soon after I fell in a short but deep sleep in my survival blanket. 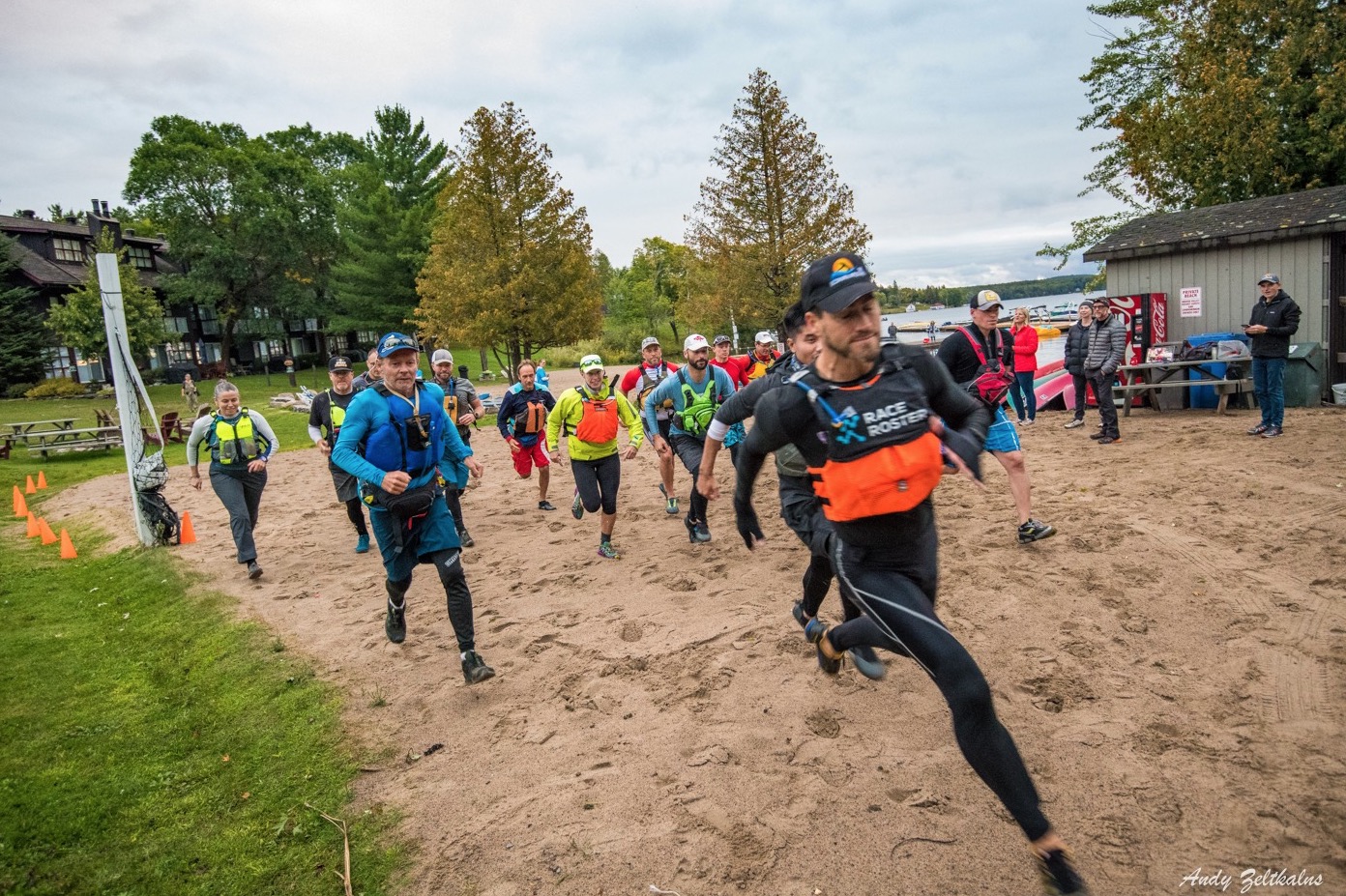 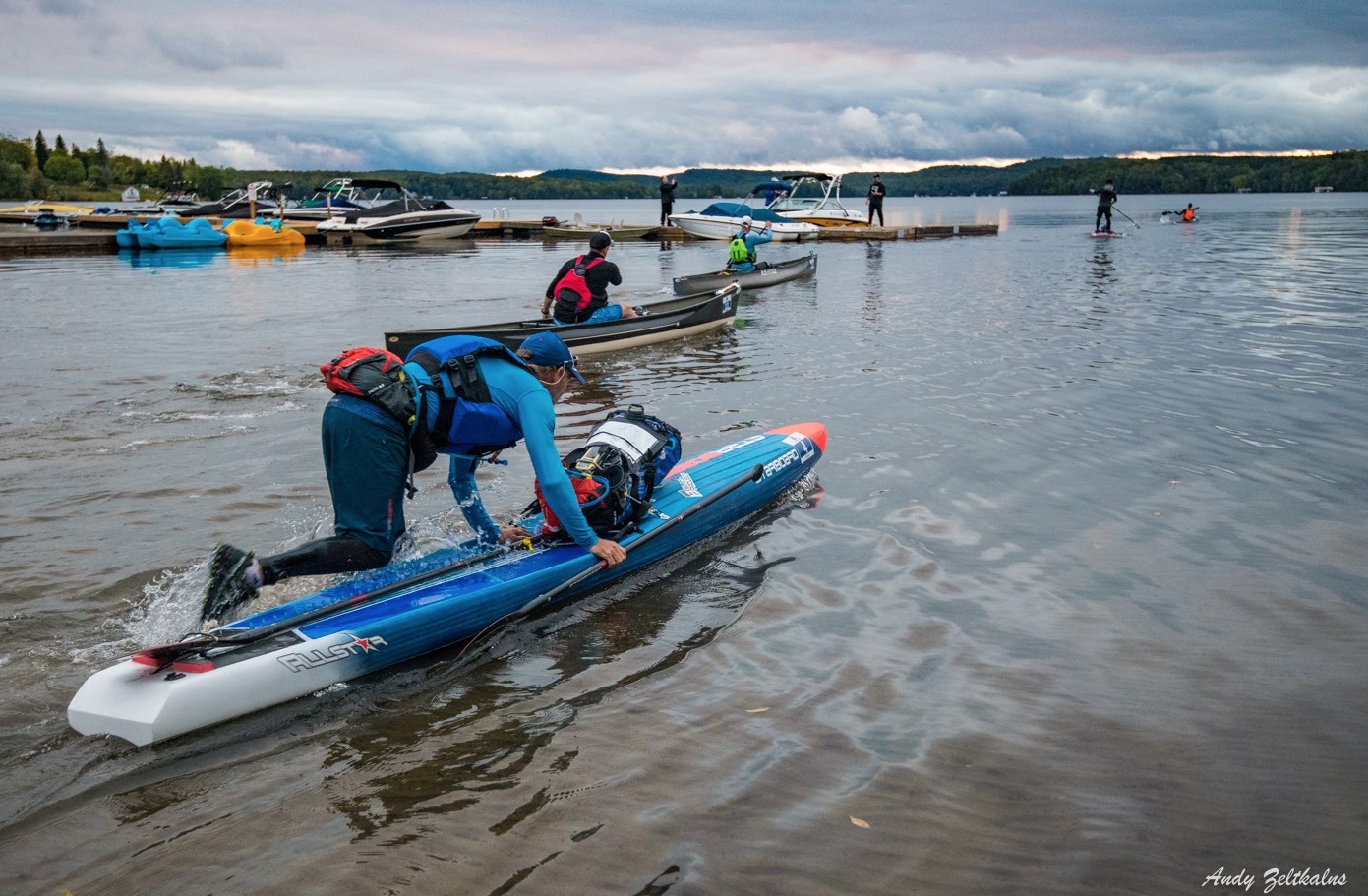 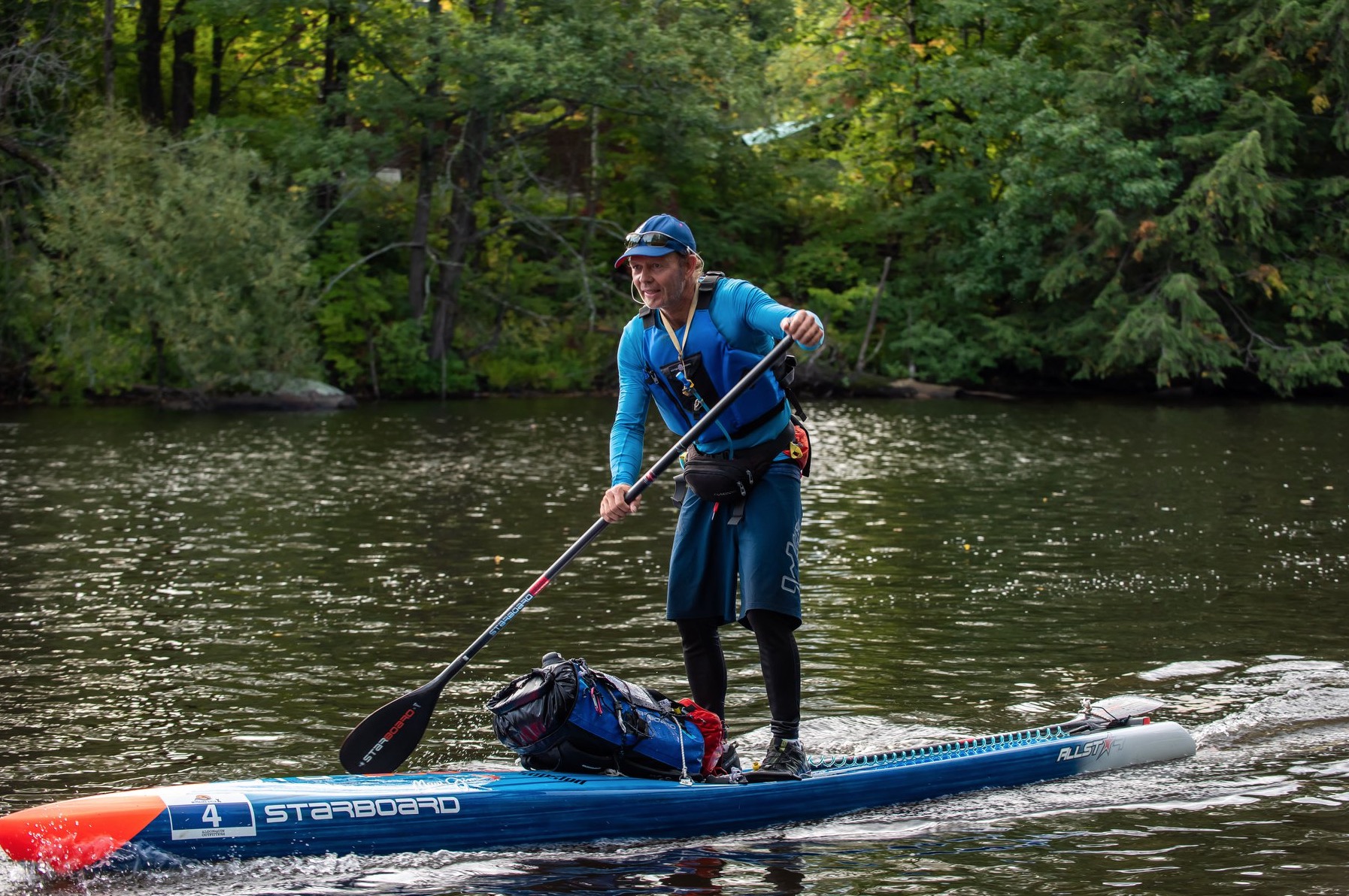 Day 2 – I woke up at 4:30 am with one hour to eat and get ready for the next day. 6 hours of sleep but I felt refreshed and as new (mentally yes, psychically probably not really!).

A short transfer brought us to the start of day two. The rest of the stand up paddlers and canoes joined us here. The weather looked a lot better, dry and cloudy. But the wind was strong and straight from the direction we had to paddle to. I had a great start and felt great until we came onto the lake – windy and chop head on. Only 4 kilometers until the next river. This river goes into Mary lake where I expected the wind to be slightly from the back. But when I got closer I dreaded that it would be slightly from the front. By the time I got to Mary lake I realized it was a strong head wind with big chop. I decided to get to the far west side of the lake to be a little in the wind shadow. This was the longer route but it would save me energy if I made it there and to be honest I thought it would be the only way to get across this lake on a stand up paddle board.

Later I heard that 10 teams had to be rescued and didn’t make the lake, many capsizing and getting stranded somewhere. Very slowly I made my way to the other side, using a lot of energy I needed later. It took me a lot longer but I got to the end of the lake on Port Sydney eventually. I paid a big price, and I used a lot more effort, and so took it easy for the next hour and a half to regain strength. It was still a very long race. In the river the wind was still mostly against us but a lot more manageable than in the open water. That portages are essential, I realized again when I saw one canoe team missing one and going straight over the falls ending up swimming and getting washed up on carver bank. I helped them gather some gear which was swimming around and I was on my way again. 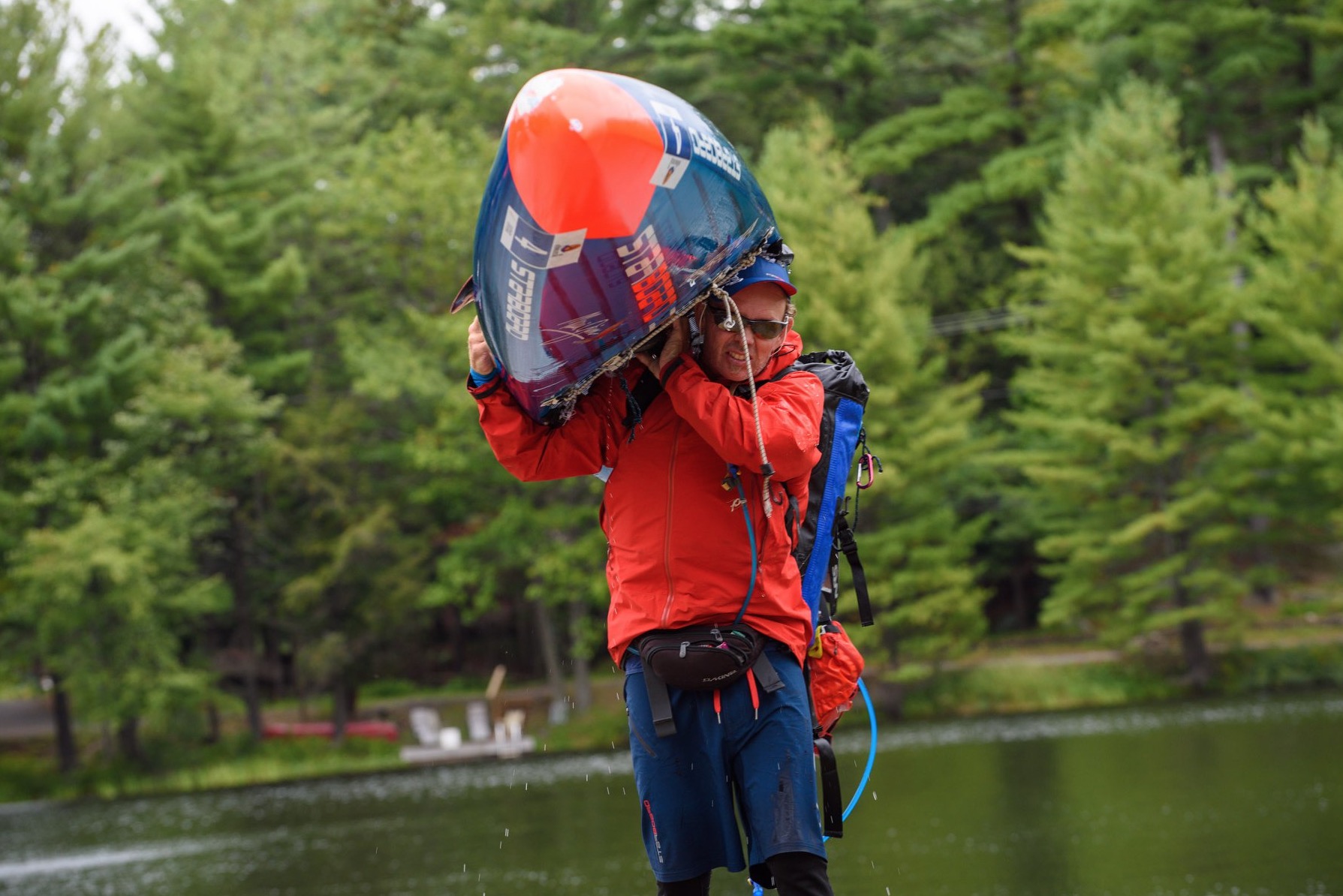 I lost a lot of time and with a cut off time of 4 pm at the next town I had to work hard to make it. Running around the last portage, a dam with a waterfall, I still had 11 minutes to get to the Bracebrigde cut off, which I made by 3 min.

It was already 4 pm and still a very long way to go. It was going to be a very long night. I kept eating and drinking as much as I could to keep the energy levels up. We were now finally going in the right direction for the wind, but it was shutting down and by night it was gone. By then the organization  told me at one of the portages that the finish would be in Baysville about 35 km before the original finish, which at that point I didn’t mind. When it got dark I teamed up with Paul and Isaac and Macenzie. The river was very low and I had a hard time to paddle in many places. Also finding the portages was a major task in the night. As soon as it gets dark your overall speed slows down a lot because of the portages. With some cursing at times we did find our way through the cold but now clear night with a full moon. If it wasn’t for the tiredness I would have enjoyed it even more because it was a beautiful night. Just before 1 am we arrived at the put forward finish line. The shortened course took me more than 32 hrs which is more than the full course normally takes me.

“This was one of the hardest years of the Muskoka X.”

Out of the 68 teams only 20 made it to the finish line and I was the only SUP. This was one of the hardest years of the Muskoka X. One other standup paddler Mike Crouzat did almost make the cut off which was heart breaking for him to be denied to continue. One other mention, Danielle Holdsworth raced the Coureur des Bois on a Starboard  Sprint, she had to abandon during the first night in the thunder storm when time was running out. But she did rather well for the first race of this caliber.

Due to the conditions the stand up board was not the easiest choice for this race but I heard many voices that they want to try out next year on a SUP. And the great organizers Mike Varieur and Rob Horton will come up with a new course next year and will introduce 2-man and 4-man SUP from Starboard, which will make a very interesting new class.

This was the stop 2 of my 3 ultra distance SUP weekends. Next week the Great Glen in Scotland.

“A race one should do at least once in your life! - Bart de Zwart”

Wow... Bart really is an inspiration showing what you can do on a SUP if you put your mind to it! Sounds like a fantastic event in a beautiful part of the world. Remember there are shorter course options, and you don't have to do all 3 events like Bart! To find out more about the Muskoka River X Race check out their website and documentary video below: