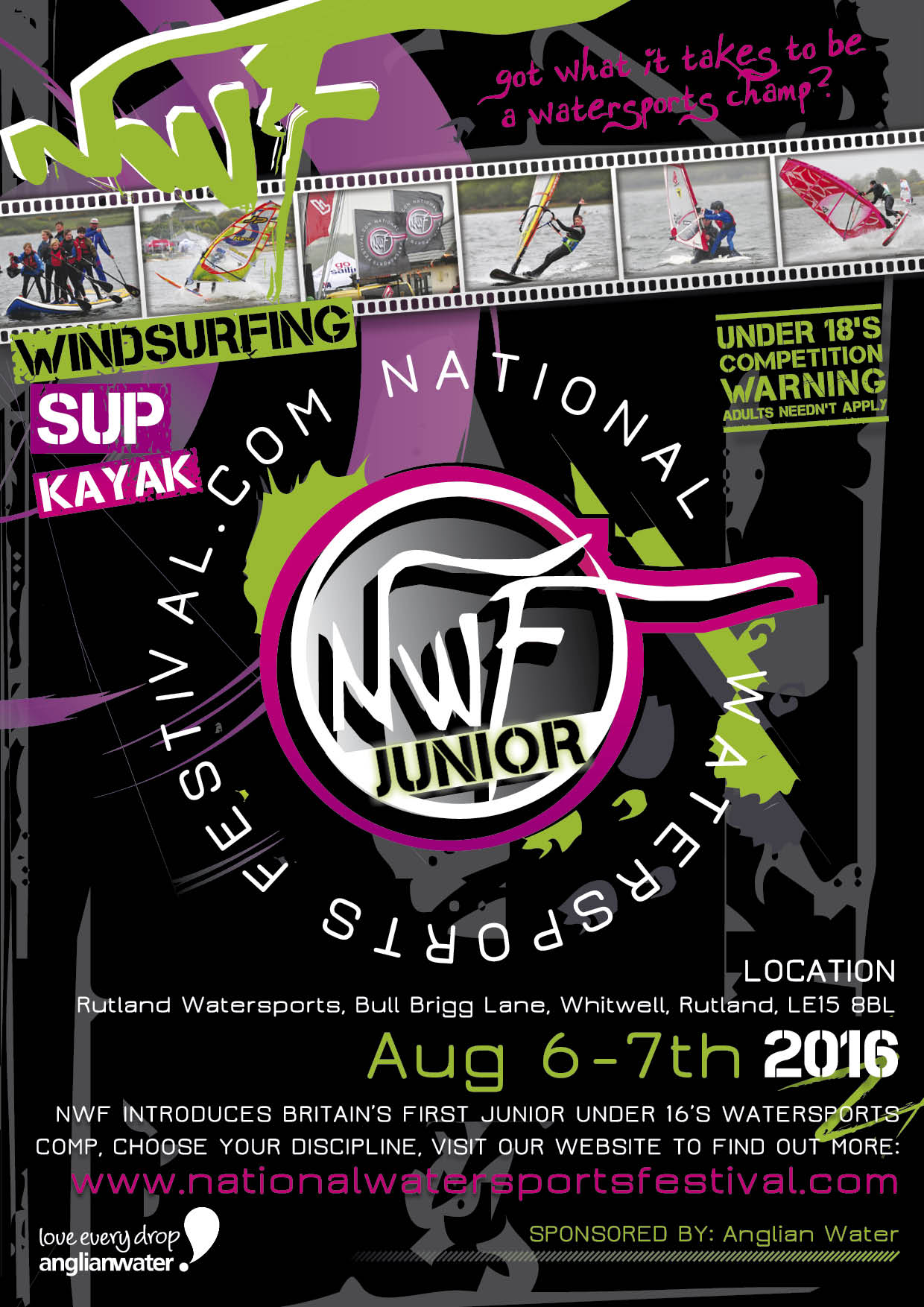 Sponsored and hosted by Anglian Water, this year’s, NWF JUNIOR takes place at Rutland Watersports on 6-7th August 2016 – and entry is now open!

The National Watersports Festival (NWF), a much-loved part of the watersports calendar celebrates its 10th Anniverary this year. While the NWF has always been open to everyone, an additional event, NWF JUNIOR, aimed solely at youngsters aged between 8 and18 (adults need not apply!) was launched two years ago.

The aim of NWF Junior is ‘To Inspire a Generation of Water Enthusiasts’ – which is quite a weighty claim! So how will NWF Junior deliver this?

Inspiration can come from many sources and youngsters are particularly open to new experiences. Inspiration at its simplest is just being given the opportunity to try many different things to find out what awakens your passion. NWF Junior helps to do just that, with SUP and Windsurfing delivered in the safest of environments; inland waters with professional tuition and safety cover.

Professional tuition can play a huge part in the success or failure of a new venture or attempts to improve. Effective teaching dramatically shortens the learning curve, massively reducing frustration – and the likelihood of inspiration being extinguished before it gets going! At NWF Junior, top watersports professionals are on hand throughout the weekend and there is much emphasis on skills and drills with clinics offered in both SUP and windsurfing disciplines.

Founder of the modern Olympic Games, Baron Pierre de Coubertin, believed that competition, rather than winning, is key. “The important thing in life is not the triumph, but the struggle. The essential thing is not to have conquered, but to have fought well.” The right sort of competition can be inspiring; it gives focus and encourages improvement. The racing at NWF Junior embodies this fundamental spirit of the Olympics. The racing element is entirely optional, but is intended to be fun and there are races for all levels of ability. It is all about taking part and doing your best, in a friendly, competitive environment.

Besides simply being given the opportunity to try new things, inspiration can come from face to face contact with role models or heroes. Olympic cyclist Laura Trott says that a chance meeting with Bradley Wiggins gave her gold medal inspiration at a young age. Laura said “I wanted to be a track cyclist from the moment I met Wiggo!”

And that is the good news about NWF Junior; if your kids are involved in watersports, they will not have to rely on chance meetings with the top names. At NWF Junior, top athletes will be there, in person, to offer tuition, advice and inspiration! Windsurfing’s Olympic Bronze medallist, Bryony Shaw, said “It means a lot to me to be able to inspire the next generation of UK windsurfing talent and that’s what NWF Junior is all about, getting kids out on the water enjoying our sport.”

NWF Junior also promises simply to be a great way to spend the weekend with the family! It is an opportunity for kids to try out a new or different water sport, be coached by top professionals and a chance to experience competition, but in a safe, fun environment without undue pressure. Not only that, there is plenty to entertain everyone, so that even those who don’t want to do watersports will have a great time! As Tris Best of the OTC (Official Test Centre) in Weymouth said “Bottling the energy, enthusiasm and professionalism of the NWF concept and targeting it squarely at youths is genius!”

The inclusion of windsurfing as an Olympic sport has a lot to do with its accessibility in terms of cost and availability; two of the reasons that SUP is one of the fastest growing watersports on the planet. On an island surrounded by water, there is no doubt that watersports are pretty accessible for us Brits! It would be tremendous to imagine a future Olympian saying that they first tried out their sport or were inspired by meeting their hero at NWF Junior.

But success is an arbitrary concept and the reasons for getting involved in sport go way beyond single-minded pursuit of Olympic domination. If NWF JUNIOR encourages more youngsters on to the water for no other reward than to learn new skills, have their confidence boosted or simply to enjoy themselves with friends and family in the great outdoors, it will be a roaring success – and then it can truly boast that it has, albeit in a small but significant way, inspired a generation!

Isn’t that, after all, what childhood should be all about – learning and fun!

Online entry is now open. Get the dates in your diary now and prepare to be inspired!

NWF will take place as usual at Hayling Island on 2-4th September 2016.

www.nationalwatersportsfestival.com or the NWF Facebook page will keep you up to date with all the exciting news about both events.