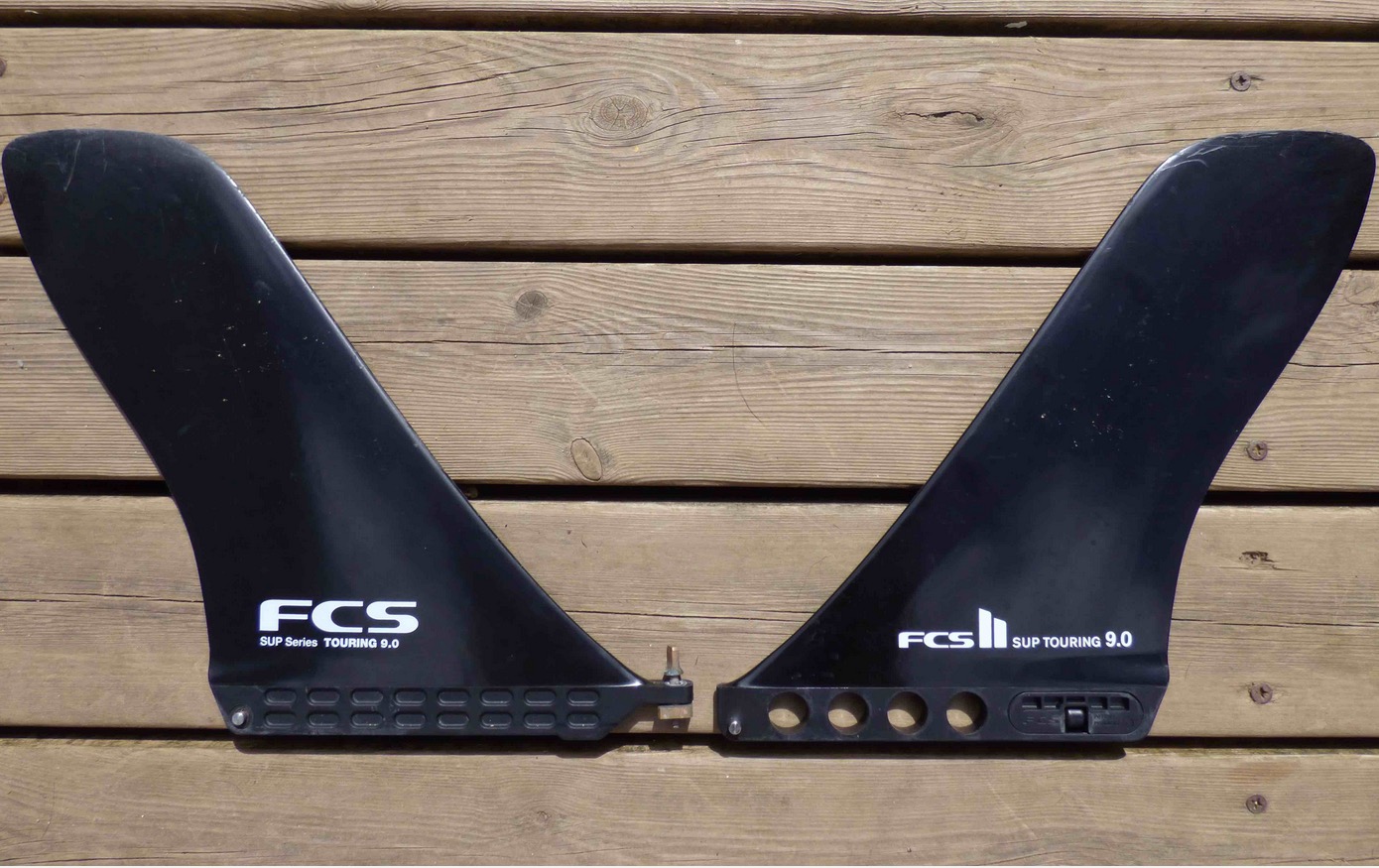 FCS have a new way to hold your SUP fin in place without the need for a screw or a plate. The FCS II Fin System is available for a number of SUP surf (FCS II box) and race fins (US box). SUP North sorted out SUPboarder with a FCS II SUP Touring fin to see how the system works;

What’s it all about?

Ever lost the screw or plate from your fin? Or forgotten your screwdriver or allen key only realising after you got the board out of the bag? Or rounded off the grub screw on a surf fin? Someone at FCS must have so they came up with a simple way to do away with screws and still hold the fin securely in place. The system is the same across surf or SUP fins, twin tab or standard fin box, the only differences being in the size of the fin and the metal tabs on the standard fin box system.

The fin is held in place by a titanium spring and plastic, or polymer roller. And that’s essentially it. By using materials that do not corrode the system should work with little or no maintenance, and as the spring is relatively short and relatively thick it should last years and years. FCS think it should last for 4,000 insertions / removals and could even outlast your board.

This video from FCS shows the system in action

The fin on test is the FCS II SUP Touring Fin. The updated version of a massively popular fin often seen as a first upgrade on any number of boards. The screw less system adds £10 to the cost but results in a fin that has a far neater appearance. The shape and area of the fin are unchanged.

First thing was to see how springy the spring felt, and surprisingly it didn’t feel springy at all with barely any movement under thumb pressure. The nearest board to hand was a 2016 Allstar, which from experience has a shorter fin box than some and has caused a bit of headache fitting fins with screw plates in (for example a JB Runner fin from Futures is a very tight fit) However with no tab for a screw increasing the length of the base the FCS II fin slotted straight in. The lack of pressure needed was a surprise as was the tenacity of the mechanism, I could lift the board by the fin. To remove simply pull the fin up and slightly forward and again the lack of effort belied the secure fitting.

On the water the fin behaved exactly as a fin should, tracking with a 9″ fin on a race board is good and it doesn’t catch on debris or weed. There is probably some hydrodynamic benefit in having no screw in front of the fin but that would be hard to detect by any normal paddler.

Will it fall out?

In normal use that’s unlikely. The fin we have has caught in mud flats, on unseen debris in the water and, accidentally  on a mooring rope and it was still there post paddle. Because the metal pin is at the front of the base any pressure on the fin when travelling forwards will simply push the fin into the board, pivoting around the pin. If you do more paddling backwards you might want to be careful but on a normal paddling day there’s no more risk of this fin going missing on the water than a screw undoing on an older fin.

Is the FCS II Fin system worth a premium over the standard fin? For this paddler, yes. Without doubt.  The ease that a fin can be removed and stored means that balancing your board on your expensive fin as you find a tool to remove it can now be a thing of the past. Finish paddling, remove fin and (carefully) put your board down, limiting damage to the leading edge of the fin and prolonging fin life. It also means no more need to take a screwdriver (or allen key) with you, no more fiddling with screws and plates with tired, cold fingers after a long paddle and no more searching for the screw that slipped out of your hand in the car park.

FCS II Fins have limited availability in the UK at the moment but SUP North have some for sale here including the touring fin reviewed and the Danny Ching Race fin.

No way. What happened Austen? Did you hit anything?

Two paddles down and lost to the ocean. No hits just popped out. Not worth the extra money, would rather save and bring a screw driver. Made for a long difficult paddle at tide change…

mine fell out the first time i used it

Hmm not good! Did you go backwards through the water at any point? I have seen them come out by hitting something backwards.