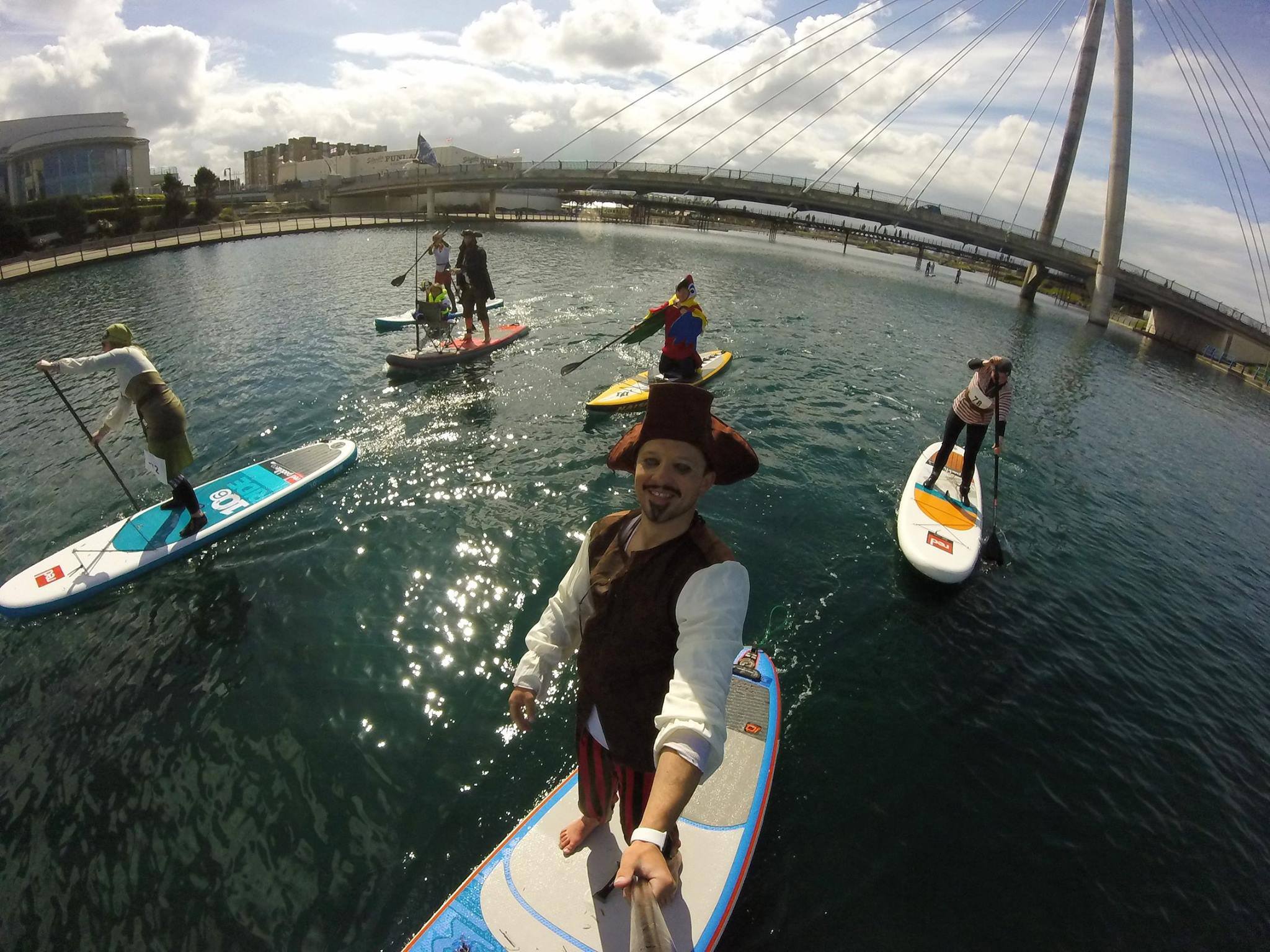 Shiver me timbers! Not because it was a chilly April day, but because SUP North were out in fancy dress raising money for charity. One of the SUP Pirates, Lucy Pearce has the pieces of eight for SUPboarder; 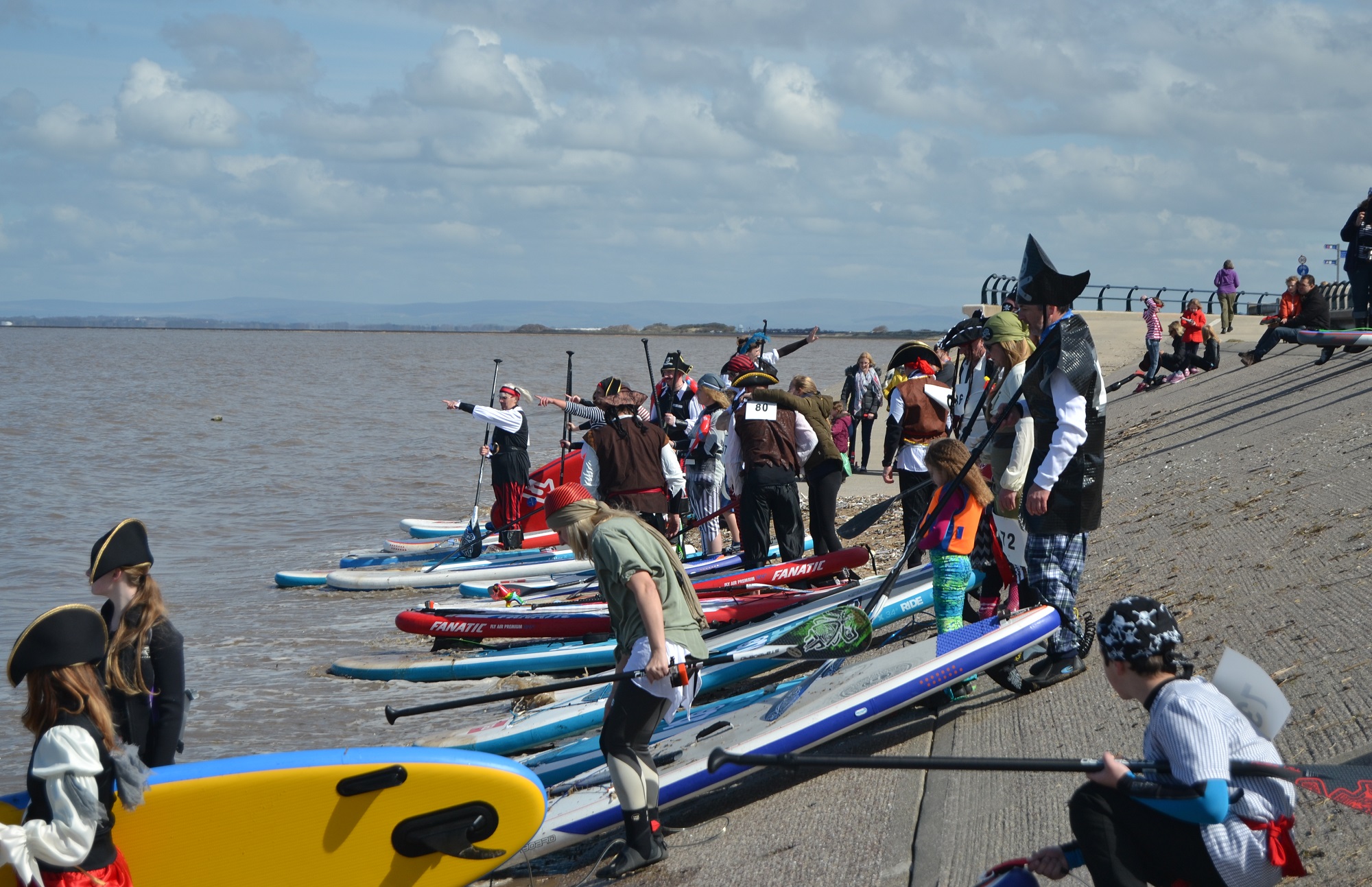 Southport SUP boarders took to the sea on the big spring tide on Saturday, for SUP North’s first Pirates Around the Pier SUP Challenge.

SUP North’s home spot in Southport, Merseyside is unusual in that we’re by the sea, but the sea doesn’t often come right in to the sea wall, as we have a 10 metre tidal range. We try to paddle when there’s a big spring tide and conditions are right, because it’s a novelty to see water around the pier (the second longest in the UK), let alone to see paddle boarders out on the Irish Sea!

Pirates Around the Pier is our way of making the most of our position. The challenge started on the coastal side of the dunes, with an approximate 1 mile paddle around the end of the pier, under and back to the slipway, followed by a quick walk across the zebra crossing, down the dunes and drop onto the marine lake to complete the almost 2 mile course. To make the event more unique and fun, everyone was required to be a pirate for the day!

The event was in aid of two local charities very important to us – the Southport Offshore Rescue Trust which runs our lifeboats, and the Lakeside Christian Centre, who kindly support our marine lake social paddling and lessons with the use of their car park and facilities.

On the day we were lucky to have blue skies and light winds while the event took place. Sea conditions were fairly challenging, with chop and some rolling swell, with the odd rideable wave, and tougher than many paddlers had experienced. But with safety in numbers and fantastic support from not one, but two Southport Lifeboats on the water, everyone rose to the occasion, including two Mums with young daughters on board! A couple of participants got damp, but the only casualties were one pirate’s sword, another’s eye patch and one compass lost to the high seas…

After negotiating the shore break, and safely crossing the road with support from the marshalls, the flat, calm marine lake was a relief for all. While some pushed for the fastest time, or to beat their mate, many had a leisurely paddle and enjoyed being part of the spectacle – it’s not every day Southport residents and tourists get to sea pirates ‘walking on water’ on the marine lake!

Every participant received a Pirates Around the Pier golden medal, and we awarded prizes for the best fancy dress, with the star prize of a carbon glass paddle (kindly donated by Starboard SUP UK) going to Mum, Christina and her daughter for their home-crafted costumes, as judged by Captain Ted of the Sailing Club. 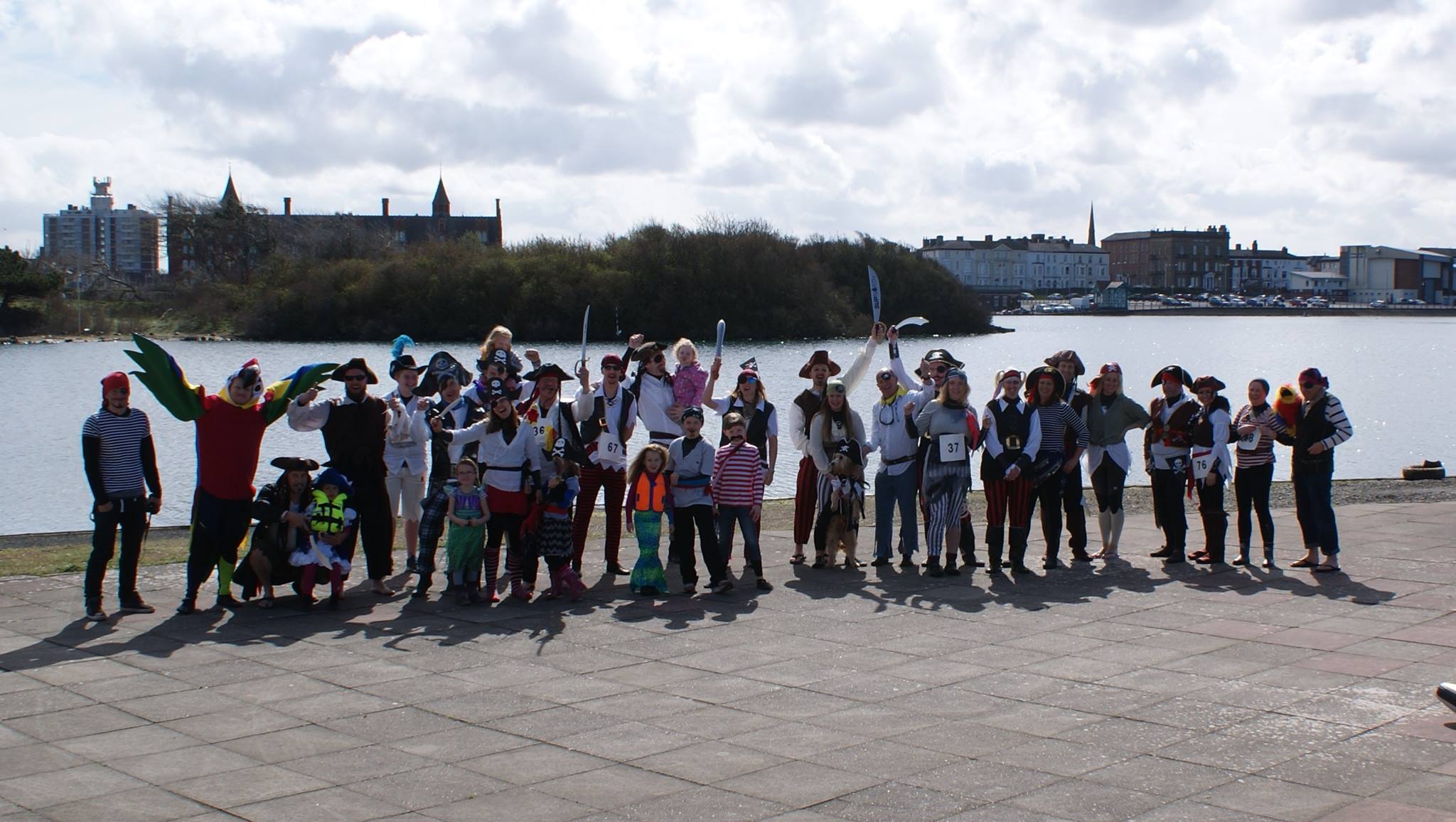 We had a fantastic day and were thrilled to have enthusiastic paddlers and pirates from the age of 7 taking part. We’d like to give huge thanks to Southport Sailing Club for hosting us and helping with raising the Jolly Rogers, providing sustenance from the galley and gunfire for the race start, as well as Southport Lifeboat crews for the essential safety boat support, Starboard for the paddle prize and to our marshalls, spectators, supporters and participants. We’re looking forward to next year, with even more pirates paddling around the pier!

You can find out more about what SUP North are up to, including their very active SUP Polo sessions, on their Facebook page here.