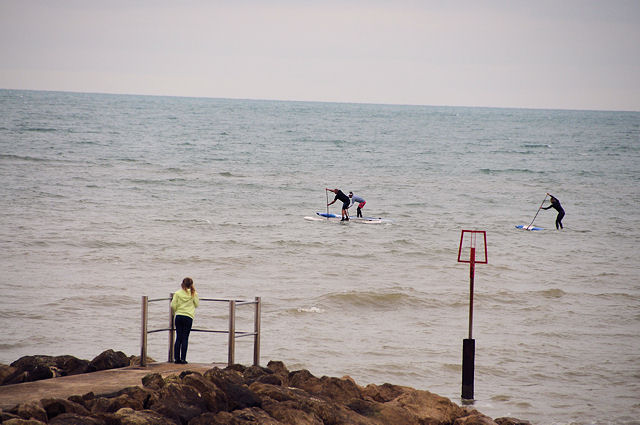 The BaySUP Frostbite series is one of the staples of the winter racing scene in the UK attracting racers from across the country to do battle in a well attended set of races. Emily King was at the final race in the series and here is her summary of what was a challenging race;

Paddlers met up at Branksome Dene Chine Poole, to compete a 10km distance ocean race consisting of two laps from Branksome to Bournemouth pier in what were proving to be challenging windy and choppy conditions.

The fleet showed a strong presence in both male 12’6 and 14’ competitors, with first time series competitors putting themselves against seasoned pros and the elements.

The race was started into breaking waves from a short run shore start. The 12’6 male and female class ran first showing that good paddle skills were crucial to make it to the first turn before paddling to the first buoy turn where many paddlers were taken off balance falling, positioning of the race soon sorted itself with racers stretching out on a long slow grind up wind to Bournemouth pier.

The 14’ class soon followed hot on their heals seeing the same challenging start with just as many paddlers falling in. Paddlers made slow progress into the strong chop and swell with many paddlers choosing to take their line out at sea to avoid the swell. The buoy turn took many more fallers and many paddlers retired to the shore after the first lap.

Paddlers worked hard trying to gain ground not only against their competitors but also against the conditions seeing many boards making the best of the down wind conditions which were proving to be very bumpy.

Faces appeared around the final leg looking determined to catch the waves and bumps into the shoreline with smiles to a welcome rest and warm clothes with all who finished saying it was a hard and challenging paddle which they had enjoyed.

And that’s it for another winter of Frostbite racing, roll on summer racing!