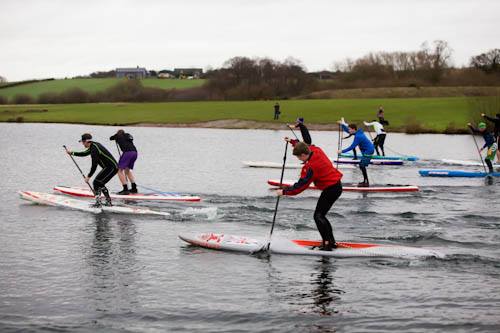 The Northern SUP Race series has been hit hard by the weather with the first two rounds having to be postponed. Chris Kenynon and his team at Central SUP got a break with the weather and here’s Chris’ round up of the race at Tamworth;

With a break in the high winds and poor weather Central SUP was able to put on  the first of the Northern SUP races. On offer was a 5k and 3k race as well as a junior race too, these 3 races would utilise the 3 lakes at the location offering paddlers of all backgrounds something to take part in.

As registration to the event opened the competitors began to arrive and in no time at all there were 17 competitors ready to race. Some old faces and some new there was a good buzz of anticipation in the air. To kick things off with Jo Hamilton – Vale very kindly delivered a race clinic to help advise on technique and ability.

Jo’s clinic proved to be invaluable as she helped individual paddlers perfect their stroke and give them hints and tips on the location that they would be racing at. This is truly what SUP is about and for the slightly nervous first time racers this helped to put them at ease and give them the confidence on the water.

Not long after it was time for the main event and race directors Ian ‘Nocka’ Tyers and Chris Kenyon were on hand to brief everyone. Central SUP’s location provides a good amount of shelter and with over 50 acres of water to play with there was more than enough room for the competitors.

It was a mass start as everyone pulled away up the main lake for a down wind paddle to the first bouy. As the pack started to even out there was some friendly husband and wife rivalry from Jo and Pete Vale as they maneuvered their way down the lake. The group then turned and headed into the wind and ready to make their way up the second lake. A notable performance from Dave Jones was clear as he became the first of the all round class to cross the 3k finish line. The 5k racers continued around to the third lake and then it was heads down for the final run to the finish. Everyone did well including junior racers Louis Jones and William Crann who hammered it out first first and second places in their race.

There were plenty of smiles and friendly banter as the medals were handed out. Central SUP would like to say a huge thanks to everyone who took part, especially our awesome club members who helped out on the day. We would also like to thank Jo Hamilton Vale as well for giving up her time for the race clinic that she held on the day too.

The next race will be on February 27th at Southport with SUP North. Please check out the Northern SUP race series website for more info and come and join the fun.

Northern SUP Racing is a collaboration of Stand UP Paddleboard Clubs and Schools in the Midlands and North of the UK working together to organise and run races to support the development of the sport. You can find their website here with race results and details on the rest of the series.