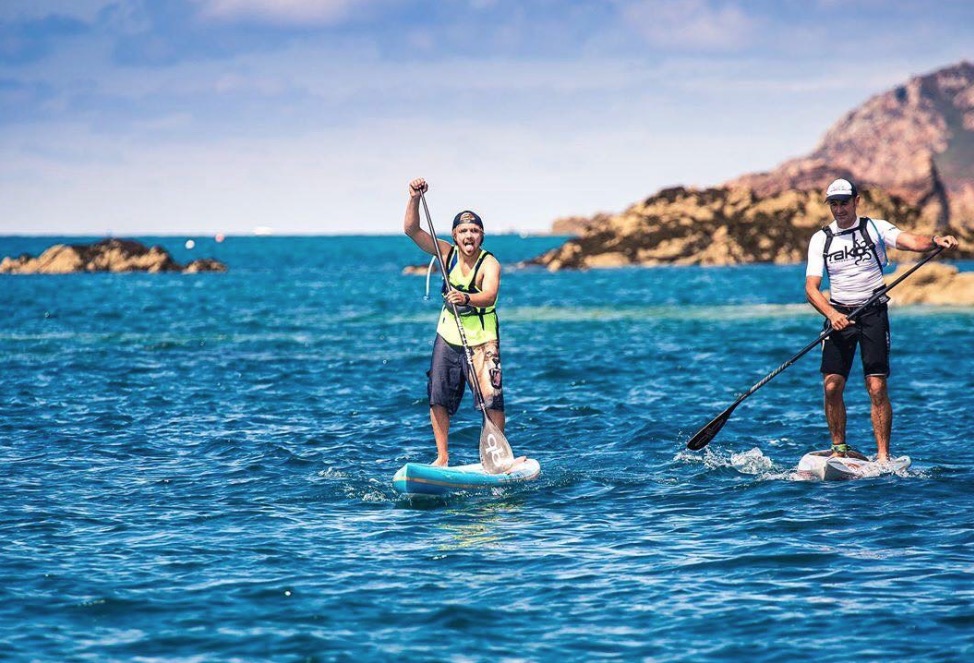 Many of us enjoy the cruising side to SUP. But there are also many SUPers who enjoy a good SUP challenge! Paddling challenges are becoming very  popular across the world and can take so many different forms, from long distance marathon style races, to setting your own personal challenge. Last week the ‘Round The Rock’ ultra marathon running race took place on Jersey in the Channel Islands. Rather than putting on their trainers, a few hardly paddle boarders decided to take to the water and attempt the challenge on their SUPs. It wasn’t going to be easy but the paddlers including top SUP athletes Andre´ Le Geyt and SUPboarder team paddler Aaron Rowe set themselves the challenge to not only complete the 34 miles in good time, but also try and beat the runners and the previous SUP circumnavigation record.

A few of us took part in a pretty cool race last weekend. The ‘Round The Rock’ is an ultra marathon running race that has been going for 5 years. I did it a few years ago and was hoping to train up for it for this year again but we had too much good surf and fun conditions to paddle so it didn’t happen. I then heard some people were swimming at the same time. So after speaking to Dave hatter (swimmer) and Digby (round the rock organiser) we decided to have a go at paddle boarding and out rigger canoeing around the island.

It was a brilliant day and starting next to the runners was a great atmosphere. Only 4 people had ever paddle boarded around the island and no one had done it on an out rigger. The paddleboard record was just under 7hrs so we had a target. Chester Mackley, Aaron Rowe and myself (Andre Le Geyt) were on 14ft paddle boards. While Rene Raimondo, Alan Fernandes and Tim Rowe were on the outriggers. Conditions were perfect from the start, no wind and the tide running with us. The outriggers took a slightly wider line than us hoping to pick up more of a run with the tide. 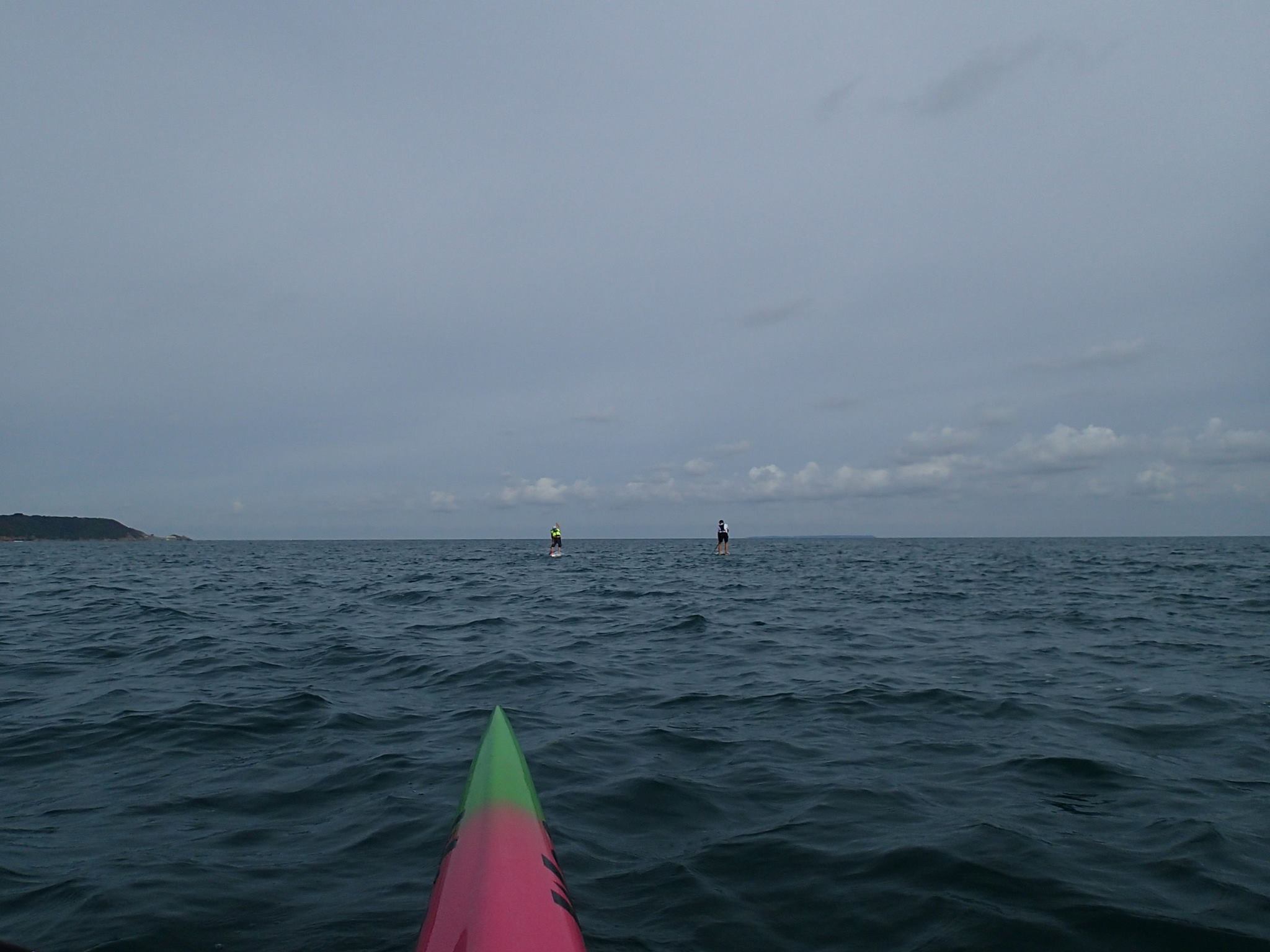 We caught up with the swimmers around Green Island and everyone was cheering each other on and wishing good luck for the day. As we rounded La Rocque we saw the runners on the coast roads and a few waves were exchanged. Conditions stayed really good up to the north coast. There was a slight headwind but the tide cancelled that out. It was really cool as you could see the runners on the coast paths all the way along so that pushed us. The outriggers were still taking the wide line and Chester had dropped back a little but told the boys to go for it. The North Coast went quite quick and when we hit St Ouen we even had a little bit of a tail wind which helped us push across the bay! The outriggers were still wider than us and Chester still going strong. At Le Braye Tim Rowe pulled in as he was exhausted and didn’t want to hold the other boys back he had still done 27 miles! We were dreading the leg from Corbiere to town as we would be against a spring tide pulling out. But we stuck close the the coast and in some places even got a little push. 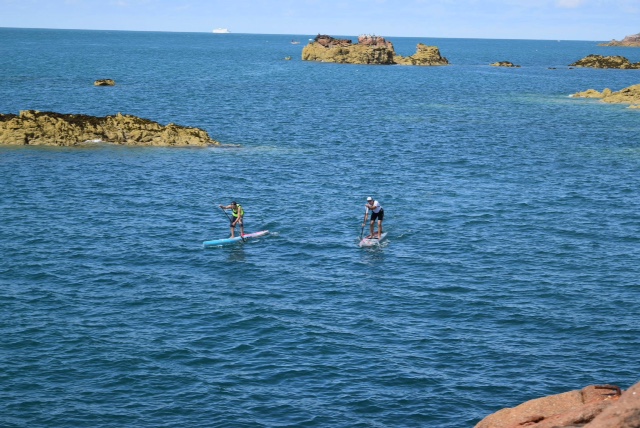 We were about 40 mins ahead of where I thought we would be and started to push with what we had left. Aaron was still going strong I had to dig deep for the last few miles! Noirmont headland had a really strong current going against us but we managed to find a little channel and get through then it was just a push to the end!

We hit the beach at 5 hrs 56 mins way inside the record then had to run up over the lettuce seaweed covered beach to the runners finish line where we crossed at 6.01 only 2 runners and 2 relay teams beat us! Chester came in at 7.15 and the two outriggers finished in 6.35 the first two guys to ever have done it! Aaron became the fifth person to sup around the island as Chester and myself had done it before. Thanks to the team for the GPS as everyone said it was great to follow it real time and see the people’s progress! 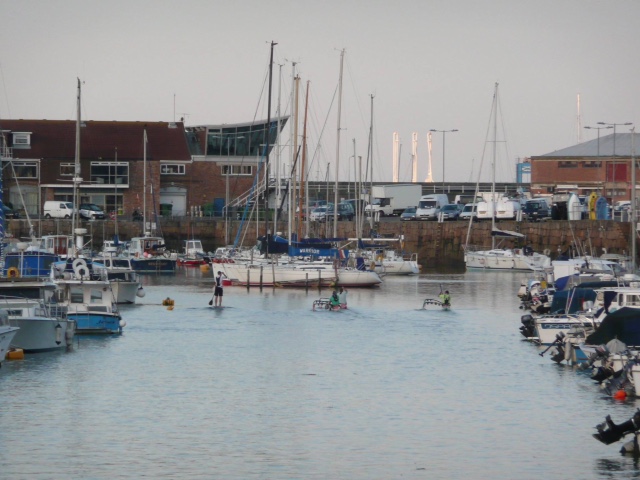 We hope very much to become more involved from early on in the process for next year to get a load more people around the rock! And to hopefully get it as an annual race.

The ‘Round the Rock’  sounds like a great SUP challenge, and one we really hope to see on the SUP calendar next year. Great fun and for a great cause – The Grace Crocker Family Support Foundation. Well done to all those who took on the challenge this year.