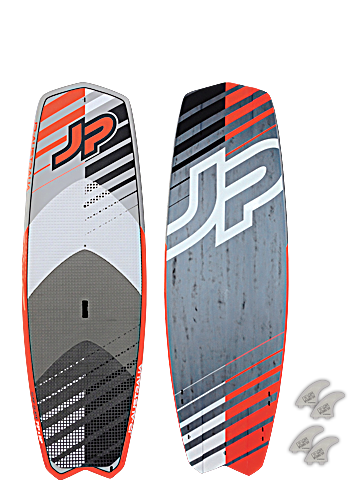 Over the last 4 months JP SUP Australia has been drip feeding us with information about their new Surf Slate board. And now with them finally in production you can pre-order your own Slate. But what is all the hype about?

Where has the concept come from? This shape of board has been around in the surfing industry for the past few years now and is called the Vanguard. It was originally designed by Australian shaper Daniel Thomson. But why don’t we see more surfers using them? Is it down to the ability of the rider, the different feel of the board or the simple fact that people aren’t keen to break away from the traditional pointy nose surf shape?

So what does having a cut-off nose and square tail do to SUP board performance? Well it basically gives you 2 straighter sides to the board which will make the board much faster by reducing drag. Chopping the nose off leaves you with a much shorter board, but the wider nose and tail offer the same volume and keep as much rail in the water as a regular board. Also the shorter nose will improve board mobility on the wave.  You hear the words ‘swing weight’ being talked about in board specifications/overviews. This basically means the shorter your board, the faster it will be to turn around due to it not having excess board and weight up front!  The real crucial part to a board like this is having a good nose and tail rocker line which will allow you to catch waves without nosediving. As you can see from the surfing video with Keahi de Aboitiz it really looks like it ticks all of the boxes, and can be thrown around, generate lots of speed and carve nicely.

Who is the board designed for? The design of the board will lend itself to somebody who is already at a good surfing ability and is used to standing on a smaller board. If this board works the way they say it does it could be a good board to get you into riding short boards. Due to the width in the tail and the nose it should offer you a good amount of stability for its size when standing on the board and paddling out.

The verdict. Well the truth of the matter is that the ‘JP Australia Surf Slate’ has made an impression on a lot of us. And no doubt with JP’s top quality finish and R&D they have put into it, it will perform well. But who and when will it perform best for? That is the question. Will it nosedive when paddling in to waves? Will the bottom turn feel as good as it does on the traditional shaped surf SUP? The SUPboarder team looks forward to testing one and giving you their verdict soon. Until then find out more about the JP Surf Slate on their website here.

What are your thoughts on this surf shape? Have you used one before? Will it be on your 2015 wish list?!!