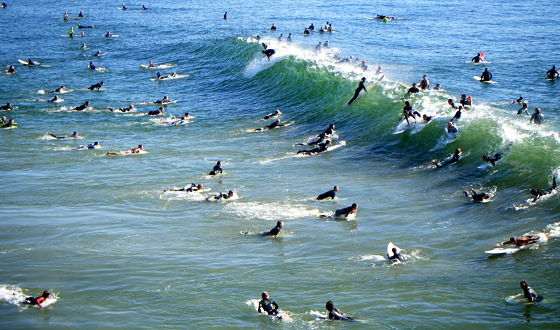 SUPboarder and experienced waterman Andrew Pieterse is back, with some fantastic tips on getting the most out of paddleboarding when in crowds. By observing what’s going on in the water and using these tips you can be sure to catch more waves and make more friends on the water.

Like most of you I am just in the water to have some fun, and with 2 kids and some grey flecks appearing in my beard, can do without the ego battles raging all around. Nothing can destroy perfect surf faster than a mass of swarming surfers squabbling over each little ripple. No thanks!  So how to deal with these marauding crowds and prone surfers?

Avoid them! Well that’s easier said than done, but it’s still the number one way. Paddle out before the sun is up or find some out-of-the-way spots which may require a bit of walk or local knowledge. Learn to settle for less-than-perfect surf; those 5 star forecasts often mean 5 star crowds.

Observe; before rushing out at a new spot or your old local, check to see what the waves are doing. Importantly, are there any waves being left un-ridden!? If so, try to figure out why surfers are struggling to catch them. Are they sitting in the wrong places, lacking paddlepower or have they simply missed a trick? There is often pack mentality operating in a line up and looking at the surf with a fresh set of eyes is a great technique for getting waves in crowded situations. If you have watched the surf for a while and not seen any waves go un-ridden, it’s just going to be one of those live-and-let-live sessions and you’ll probably be sharing waves. Don’t only watch waves; make mental notes on which surfers are completing rides and those who are struggling. No point in pulling back for someone who is not going to make the take-off, or simply going to ride the foamy straight to the beach.

JP rider Jackson Close surfing one of the busiest surf breaks in the world.

Use your point-of-view advantage; from a standing vantage you can often see sets approaching from a greater distance. Count the swells in the set. Prone surfers will usually freak out over the 1st couple of waves in a set, as they’re effectively blind to the rest and don’t want to hedge their bets. Be patient. If the set has 3 or more waves, don’t even look at the first two, as by the time the 3rd or 4th wave comes around chances are you’ll be on your own and will have your pick. The only disadvantage is the flotsam and jetsam you’ll have to dodge on the inside!

Lastly, make friends. The vast majority of surfers are probably on the same wavelength as you, just out to have fun and get their fair share of waves. So don’t be an arse. I’m tired of having to defend my sport from stories about paddlesurfers on giant boards mowing everyone down in their path and catching every wave. If you’ve had a few good ones, sit in the channel for a while and carry on observing what’s happening in the line up. If someone has a good wave give them a hoot and nod; trust me it works!

Getting acceptance from prone surfers is hard work; you’re on the outside from the start and may as well have a bull’s eye painted on your back. It’s impossible to always avoid confrontations, some people have chips on their shoulders and that’s that. But with some sense you can always find ways to have a good time in crowds, even if you can’t avoid them.

So how do you best deal with a busy line up? If you’ve got any good crowded paddle tips to share we’d love to hear them.