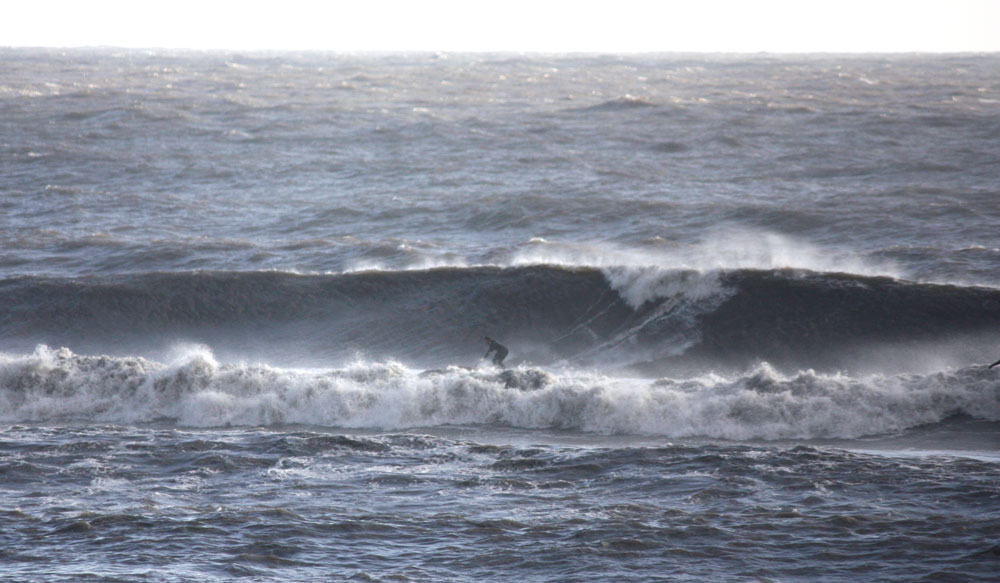 The storms and extreme weather which have battered the UK recently, have no doubt left many people with anything but fond memories of December 2013. Flooding, no power and a ruined Christmas dinner is never much fun. But for many SUPboarders around the country, the look of the weather charts meant just one thing… big swell! And for many SUP surfers, for once the weather man did not disappoint! The occasional break from the gale force winds produced clean, big swell… the best Christmas present and end to 2013 for any experienced SUP surfer! And it was no exception for the SUPboarders in Lyme Regis. Here’s what Jake Patrick from Boylos Watersports had to say about their ‘Big Monday!’…

Recent low pressure systems have certainly been bringing some big and heavy conditions to the bay in Lyme Regis. The team at Boylos Watersports have been maximising their water time and trying to capture pictures of the swells too. The 30th December, saw some of the biggest surfing and paddle boarding conditions for a long while. The forecast for the day came true and 45 knot southerlies battered the shore line through the early hours of the morning. The swell that was pushed up was awesome and waves well overhead were thundering through regularly. In the early afternoon the tide dropped and the winds swung west (cross-offshore) and the waves grew and cleaned up!

A local SUP legend Nick Wall got down to the beach early to make the most of the conditions and managed to stroke into what is without doubt the biggest wave ever SUP surfed in Lyme Regis! Nick who was obviously stoked and full of adrenaline has this to say about the wave of the year:

“I got down pretty early around 9:30 to make sure I could get out on the lower tide which is always better in Lyme Regis. The waves were pumping and I immediately set out on the 9ft wave SUP I often go to for sessions here. I couldn’t get out though, there was a really strong current running west along the beach and the water was boiling after every set. I tried for an hour or so and came in!I took a breather and wandered up to Boylos for some lunch and a chin wag. After chatting with the guys there I decided to head out close to the break water and sneak outside the sets using the current. This worked perfectly and I lined up with the surfers waiting for the sets. I wasn’t there long when the wave came through. A surfer had gone for the first wave and I was left with the second of the set which ended up being a monster! I remember looking down the drop and just holding my breath, I though if I did anything, I had to make the drop. As it turned out I made it and bottomed turned up to see the Lip way above me peeling, I straight lined it and just snuck around the breaking section. It’s definitely the best wave I’ve ever had here and one of the best I’ve had full stop! Thanks Boylos for the picture!” – Nick Wall

It’s great to see people all around the UK pushing the limits of SUPing in their area. With equipment and techniques developing all the time, exactly how good the UK SUP scene will get is an exciting thought! – Jake Patrick.

If you got out SUP surfing in some monster swell over the last few weeks the SUPboarder Team would love to hear from you and see some pics. Get in contact via our Facebook or contact us page.

And if you’re heading out in big swell, make sure you know your limits and the SUP surfing rules!