Zane Schweitzer has just won the inaugural SUP Foil division race of the 27 mile Pailolo Channel crossing from Maui to Moloka’i at the 2018 M2M Crossing, setting a new channel crossing record time and winning the overall classification – beating all other crafts including traditional outriggers, surf skis and unlimited SUPs!
The 15 x World Champion and 2 x Ultimate Waterman, Zane Schweitzer  has always been pushing the boundaries in the multitude of ocean sports he persues including windsurfing and paddleboarding surfing. “InZane” has been at the forefront of the SUP foiling phenomenon and is now, once again, pushing the boundaries of this new frontier.
The Maui based waterman raced with the Starboard 6’9″ x 23″ Hyper Nut Carbon with a GoFoil Iwa just beneath the surface. Zane didn’t accomplish this feat alone but gives credit to family and friends for their support in helping him realize this dream. He was also pushed hard all the way to the finish line by mentor and friend Dave Kalama.
Here’s Zane’ account of winning the 2018 M2M Crossing on a SUP Hydrofoil ~ 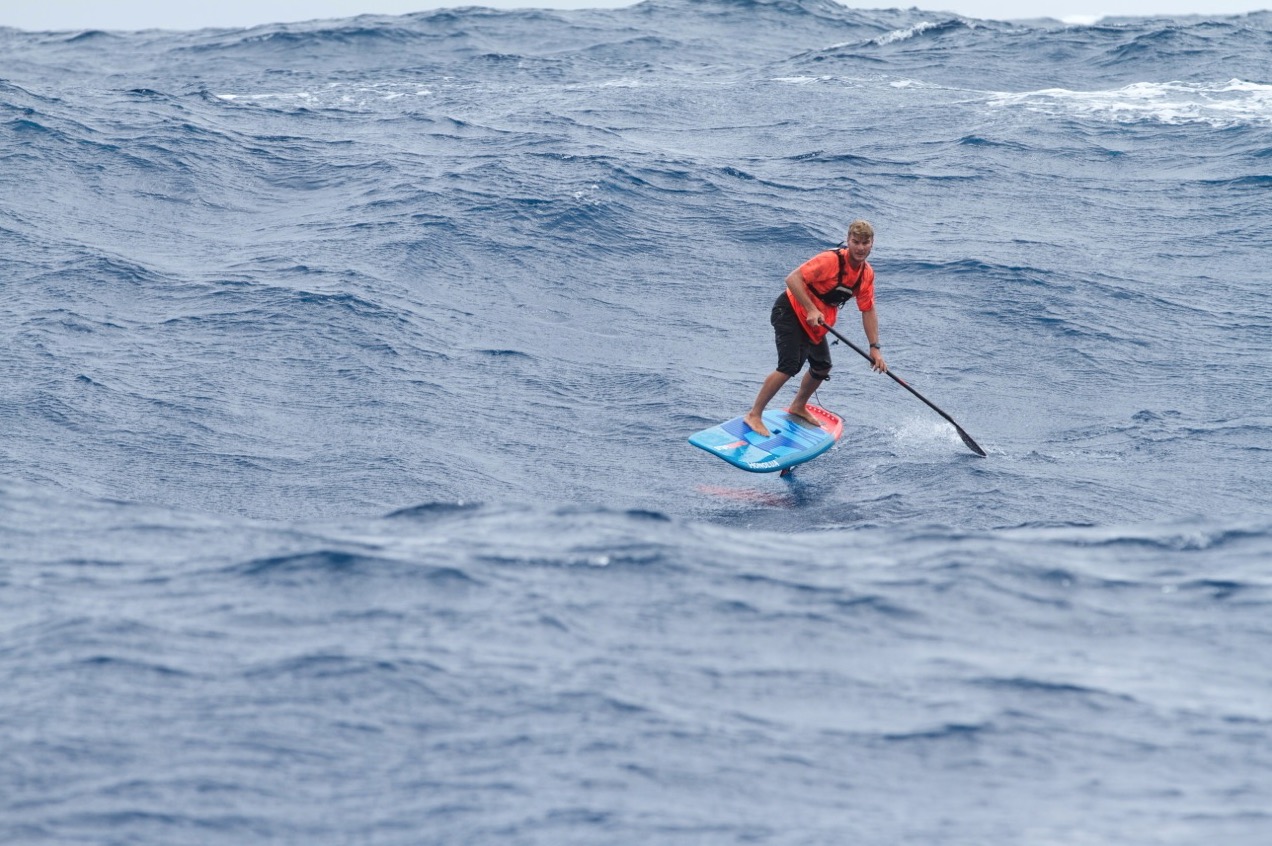 “From the water start outside of Fleming’s Bay, on West Maui, I look over my shoulder at the braze crew of Hydrofoilers taking on one of the first ever major SUP foil events. Lined up beside me was Austin and Dave Kalama, Mark Rapahorss and Alen Kadiz.

40 minutes after the SUP start the blast of the start horn for the foil classification sounded. I gave it 3 hard sprint strokes and quickly popped to my feet – and felt like I had already made it to the flying position. Besides one quick fall, I felt a nice flying rhythm and soon developed a good lead ahead of the other foilers. Near the most exciting part of the race with the biggest, fastest-moving swell, Dave Kalama had a line that seemed to be faster than mine and so he was gaining ground on me. I moved away from my dad who was my escort boat to feel the water further South towards the line Dave was following, but I soon realized that I made a bad choice and was just getting psyched-out by my competitor and not just following my own line – and the great course my very knowledgeable father had me on! My dad noticed what was happening and so quickly came over to me and reminded me to get back on course. Once back on course, I was able to catch back up to Dave, then eventually we were neck and neck just as we had an unexpected change of conditions – conditions that presented us with an extra challenge.
The wind started to die and the swell dropped too as we neared our finish at Kaunakakai Harbor on Molokai, and I knew this was a good time for me to take advantage of the hard sprint, interval and pump training Larry Cain (Paddle Monster) has had me on for the past 3 months. Shortly after the wind and swell died off, we then felt the wind in our face – with almost 4 miles still to go!
I felt some raging cramps coming on as I was sprinting and pumping so hard to get to the end before the headwind intensified – just did my best to mentally block the pain out. I was relieved to see Dave Kalama on my side – land to the water – as I knew it would be very hard for both of us to once again get the foil back up and flying after touching down in these flat waters. I kept sprinting and pumping and flying for short burst as much as I could, through my cramps and exhaustion until finally, my board touched down for the last time and I was unable to get airborne again, to paddle home the last 2 miles or so on my 6’9” Hyper Nut and Iwa GoFoil both fully submerged. Dave was on an even shorter board than mine so I just had to keep going, padding and grinding, knowing that uncle Dave was also pushing water and pulling a foil. 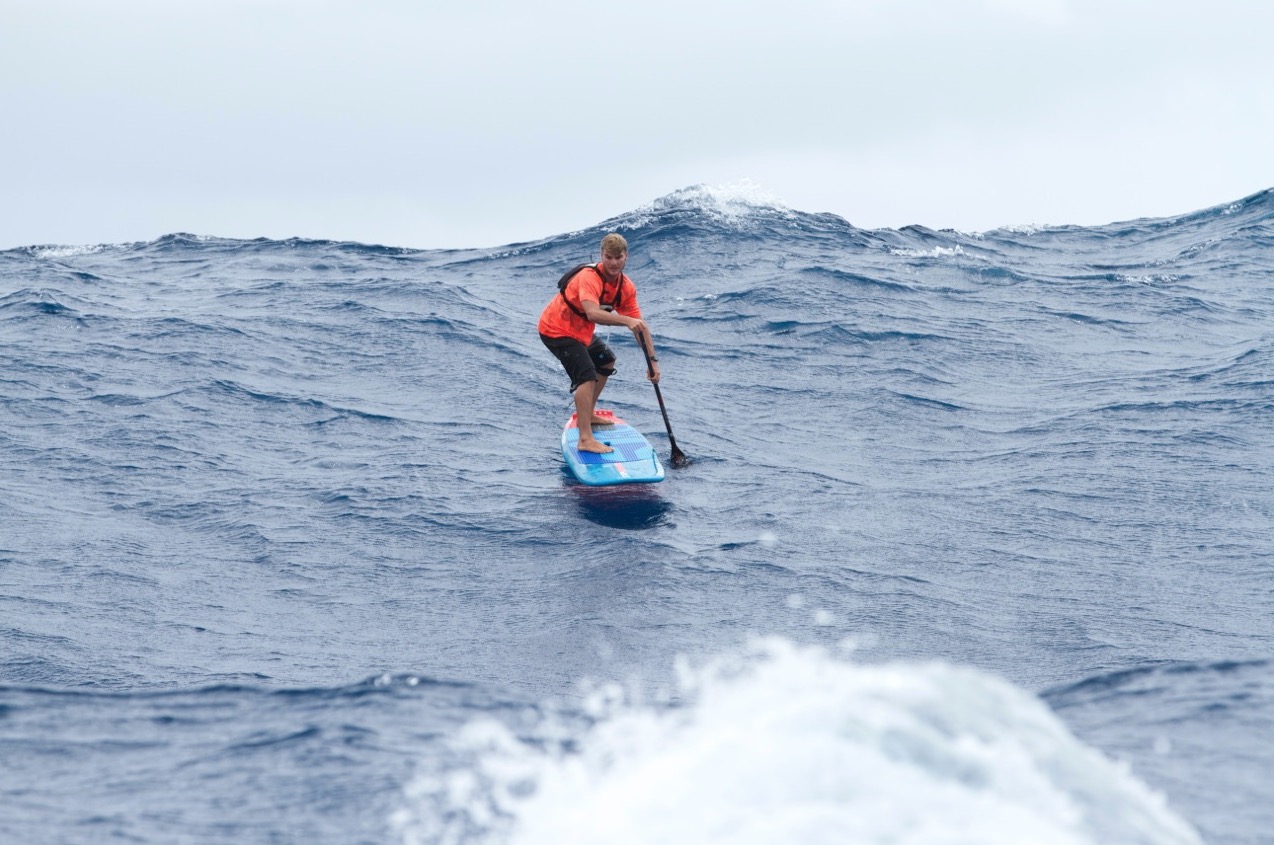 I was stoked to break the new record time across the channel and win overall between all crafts! My time was 2:24 with the help of the 25 knot winds and big swell- although the last 2 or 3 miles were into the wind and flat. If the wind was its normal NE Trades I believe I could have crossed the finish line foiling being near the 2 hour mark!
It was a tough paddle when landing in those last roughly 2 miles of flats, leaving me to drag the foil on only a 6’9” SUP after pumping hard for 23 miles, but man, was it a fun session and run filled with countless epic full-speed drops and rides I couldn’t even time they were so long!!
Big mahalo to my team for the support, firstly to my Dad and his crew on the escort boat, Uncle Joe and uncle Scott Shoemaker, my coaches Larry Cain (Paddle Monster), Uncle Braddah Kamansi (Native Action) and my brother Matty Schweitzer! Also mahalo to my supporters and sponsors for the best equipment, Starboard with the 6’9” HyperNut, GoFoil Iwa, 5’ Revolwe BioLeash, VestPak Hydration, and as well Kim Yap and Donica Shouse for the meal prep and race fuel!
It was an epic run!”
Words Zane Schweitzer
Video of the finishing stretch and the final pass that led to my win and record breaking Pailolo Channel Crossing Time at the Moloka’i Holokai- 27 mile Open Ocean Sup, Canoe, Paddleboard and Hydrofoil Championship from Fleming’s on West Maui to Kaunakakai, Moloka’i. Video and edit by @mat5o Matty Schweitzer.