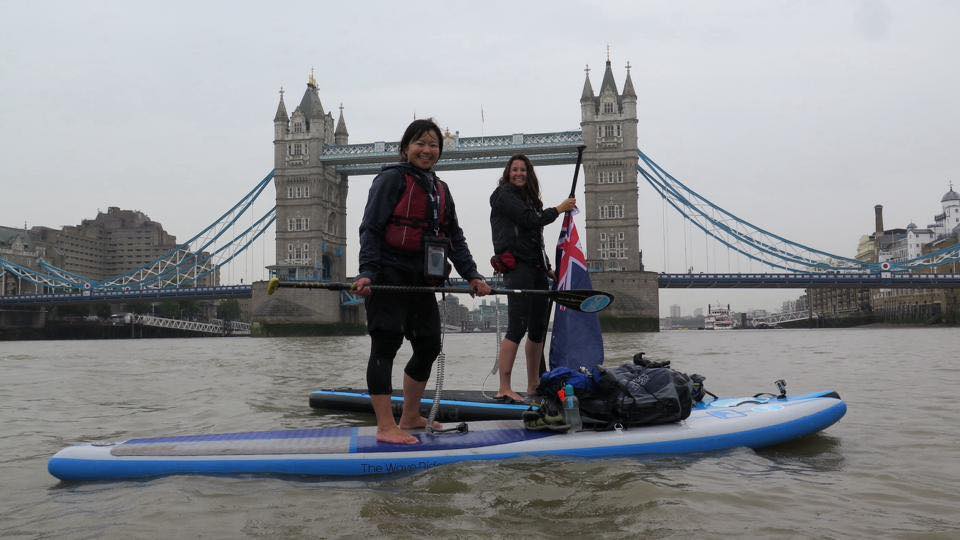 Last summer two friends, Mel and Michelle went for a paddle. But not the leisurely cruise you might expect from two friends on a summers day. They decided to set themselves the challenge of paddling an epic 206 miles, the length of the entire River Thames from its source to the sea. With Mel having only stepped foot onto a SUP a handful of times before, paddling this distance mostly unsupported was never going to be easy! But even the unkind summer weather didn’t stop them without a fight. Mel shares their 11 day Source To Sea adventure with SUPboarder;

The once calm skies had turned a turbulent grey, the southerly wind had picked up in speed and was threatening to propel us into the shores of Canvey Island.  Then it began to rain.  It had taken us 4 hours to paddle 15km, the total time we had estimated to complete the final leg of our journey and we were only half way there.  As the wind and rain began to pummel us and with our destination in sight, I looked over to Michelle and wondered if we were going to make it.

Eleven days earlier Michelle and I had embarked on an adventure right here in the heart of the UK. The aim was simple, to Stand Up Paddleboard the length of the River Thames from source to sea. We soon realised this would be no easy task. We were to make our way down 206 miles of river, negotiate 47 locks, paddle through one of the busiest commercial waterways in Europe and end at Southend Pier. The River Thames is the longest river in England and is both iconic and instantly recognisable as it weaves its way across the landscape from east to west. During six months of planning we were to learn a lot about this incredible resource and how to navigate it.

Michelle had the seed of the idea whilst roaming the wiles of Wales one weekend. We had spent the previous year immersing ourselves in the world of adventure and after one expedition planning workshop were confronted with the question – what will you do next? It was probably with an incredible degree of naivety that I agreed to come on this trip, envisaging a long weekend at best, where we would meander down the Thames on some Tom Sawyer-esque journey, supping ales from the river side banks at the end of each day. Of course this was not to be the case. Once we knew that we were going to do this we immediately came upon our first real challenge. We didn’t actually own boards. This was closely followed by my distinct lack of experience, having ventured on the river by SUP only twice before.

Sharing our adventure with others enriched it in ways we did not expect. Active360, a London based paddleboard company loaned us boards and provided us with invaluable support and advice on the workings of the Thames.  Just as importantly they helped me remedy my somewhat questionable paddle technique. Ben and Simon Arthur who we had the great fortune of meeting one misty night camping out in the hills of Surrey helped us with practical logistical support by providing and re-locating gear to kick start our journey. Riverside ramblers kept us company on route and friends met us along the way, boosting our morale and encouraging us onwards.  Through having conversations we were to learn about the perils of foot rot, the value of nutrition, and that equipment we initially thought we’d have little use for would become our daily go to. We also learnt that pitching for sponsorship two weeks from departure was a somewhat time consuming and fruitless task.

Since 2012 it had been illegal for stand up paddleboarders to travel down river past Putney Bridge. Up until a few months ago you will have found this written in red, bold, type face on the Port of London Authority (PLA) website. It was to take us three months from our initial conversation with the PLA until we were finally granted permission to pass beyond Putney. Due to our own time constraints we decided to begin our trip without it. As we made our way down river and with no contingency plan in sight we found ourselves just four days away from London without confirmation.

On the banks of Cookham, sitting on our boards as they bobbed in the wash of a passing motorboat, we received the phone call we were waiting for – the PLA had finally agreed to grant us the permission we needed.

Crucially we were required to start and end our journey from Putney to Southend within a three day window period with no flexibility on either side. We needed to demonstrate that we took our own safety seriously.  This lead to completing an extensive risk assessment and passage plan. By the end of this exercise we were fully aware of all potential manor of hazards and obstacles that may cross our paths, even down to what we would do in the event of a swan attack (wide berth, every time). We also had to have a support crew from Putney onwards.  We were given the name of one man with the required credentials and experience to guide us through the heady waters of central London – Harry Whelan. Harry had a 20 year working knowledge of the Thames and just so happened to have circumnavigated Britain and Ireland twice by kayak.  We would be in safe hands, as long as he said yes.   One afternoon I received a message from Michelle simply stating – “we have Harry”. From Tower Bridge we were met by our safety boat essentially fitted with Automatic Identification System (AIS), skippered by Ian Dunkley and supported by the Sea Cadets. The safety boat was to be our companion for the following two days as we made our way towards Southend.

Traditionally the source of the River Thames starts at Thameshead, near the village Kemble and is marked by an engraved stone set in a meadow guarded by an ancient ash tree.  This was to prove instantly problematic given that the premise of our trip was to paddle from source to sea. We decided to cycle the first 36km from Thameshead to Lechlade, where we would then dip our boards in the river and make our way down stream. We were unsupported at this point, carrying all our gear strapped onto our boards. On the non-tidal Thames we would camp along the riverbank, hunkering down at campsites, locks and grassy verges boarding local pubs or behind abandoned boats. Once we hit London and where riverside campsites were in short supply we stayed in hotels close to the river.

We were met with some curious looks as we lumbered around Woolwich town centre with inflatable paddle boards under arm in the pouring rain, asking for directions to the nearest Holiday Inn.

We added the element of science to our journey. We found out that Thames21 was completing a citizen science project that focused on water quality testing and we were ideal volunteers. Whilst samples are typically taken from the foreshore we found ourselves in a unique position where we could take samples from near enough the middle and along the full length of the river. Thames 21 is a charity that is integral in maintaining the health of the tidal Thames. As river users we had a vested interest and passion about water conservation.  We were to take water samples on a daily basis as we paddled our way between reeded walls, fields, through villages, towns and cities and onwards to the expanse of the mouth of the river. These results would later be added into Thames21 database and compared to other samples.

Every adventure has it’s challenges. After a few days of paddling we began to wake up each morning with hands stiff and tingling with pins and needles, resisting further movement and then suddenly fulfilling their purpose when called to action. Towards the end I experienced a profound sense of swaying and seasickness –  strangely only felt when my feet had firmly reached land and it would stay with me until my body could make sense that I was no longer on a moving object. Aside from our physical challenges the biggest of them all was the weather. The British summer peppered us with warm summer days, grey skies and rain. And then there was the wind, which would change its alliance on any given day to make our journey more or less arduous. Our third day towards Clifton was to be our longest. We had 30kms, 9 locks to negotiate and confrontational headwinds. Thirteen hours later we clambered onto the banks at Clifton with the sun all but sunken below the trees, smeared in bird poo, tired and hungry, having to contemplate setting up the campsite for that night. Wind was one of the most influential elements in our journey, making some days longer than anticipated and ultimately affecting our last push to the end.