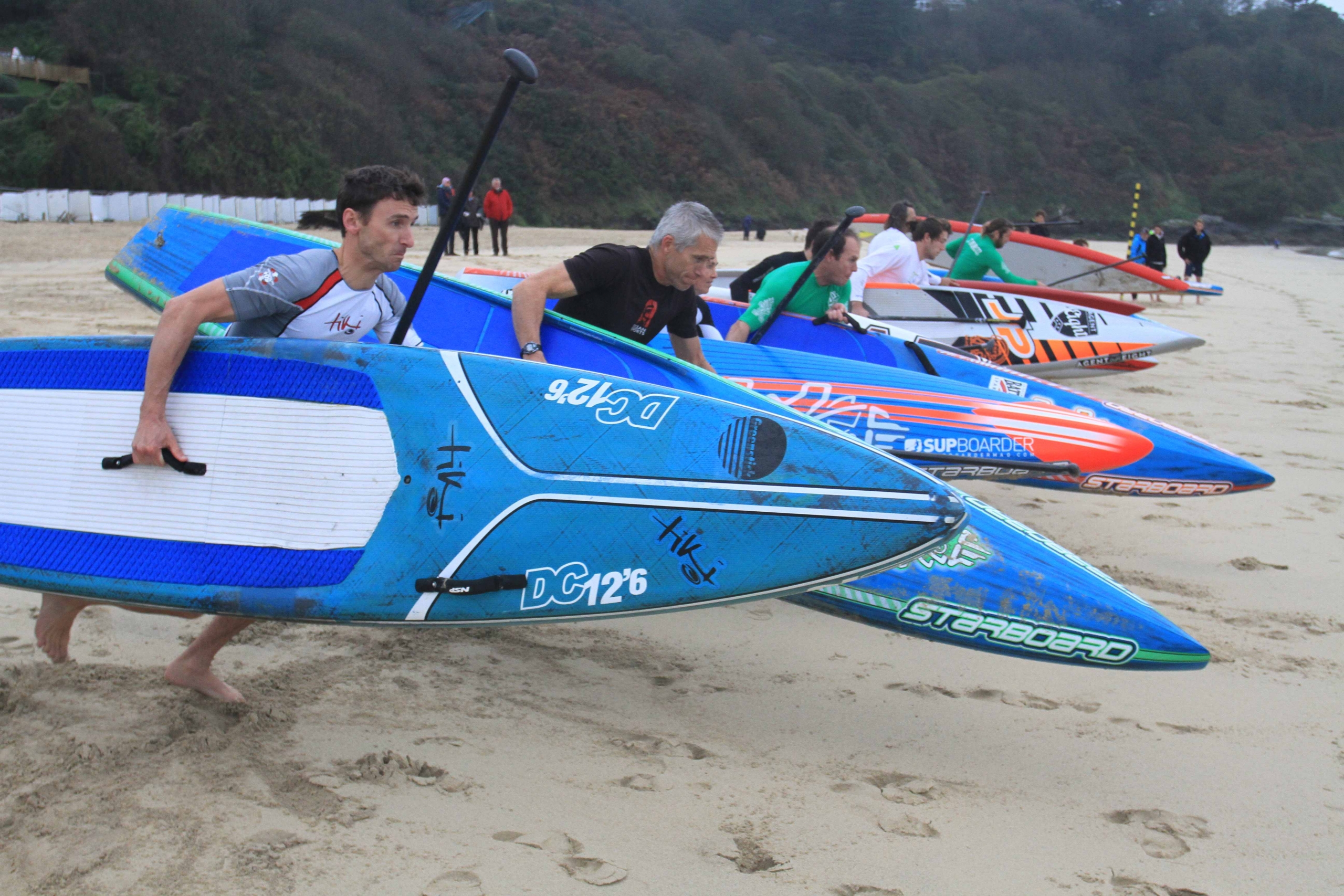 Each year the UK sends a team to the ISA World Stand Up Paddle and Paddleboard Championships. The ISA events follow a set format for 12’6 boards only where a typical UK race includes separate categories for 14′ and 12’6 so a separate selection event has been held each year to select the UK team. The selection for the 2016 ISA distance and technical races was hosted by the Ocean Sports Centre and held in Carbis Bay, Cornwall over the weekend of 7/8th November.

The ISA World Championships have been described as the Olympics of Paddleboarding and are held each year in a different coastal location. In 2015 they were held in Mexico and SUPboarder published a guide to the competition here. For the SUP paddler there are three events, surf, technical and distance events. For the prone paddler there is a distance race. In addition to the individual events there is a team relay involving all SUP paddlers meaning that all competitors have to be good at all aspects of the sport. The UK selection for the SUP surf team was held in October at Watergate Bay and you can see the SUPboarder video coverage here.

Like many races in the open sea starts are from the beach, and then boards in hand competitors sprint down the beach and launch themselves into the surf. A good start will give the best line to the first buoy that’s usually not too far from the start. The rest of the course will be dictated by conditions on the day and organisers will try to make the most of conditions to give a long downwind section. This inevitably means a long upwind section too, punishing for competitors.

Conditions on Saturday morning were horrible with driving rain and gale force wind lashing the Cornish coast but by 11 the sun was out and the wind had dropped to simply ‘strong’. With no surf the water in the bay looked calm with a gentle rolling swell but further out whitecaps were clearly visible. The wind though was another matter,  with gusts around 30 knots, that’s Force 6 – 7 on the old Beaufort scale. From Wikipedia Force 7 at sea is described as “Sea heaps up. Some foam from breaking waves is blown into streaks along wind direction. Moderate amounts of airborne spray.” And on land…

Whole trees in motion. Effort needed to walk against the wind 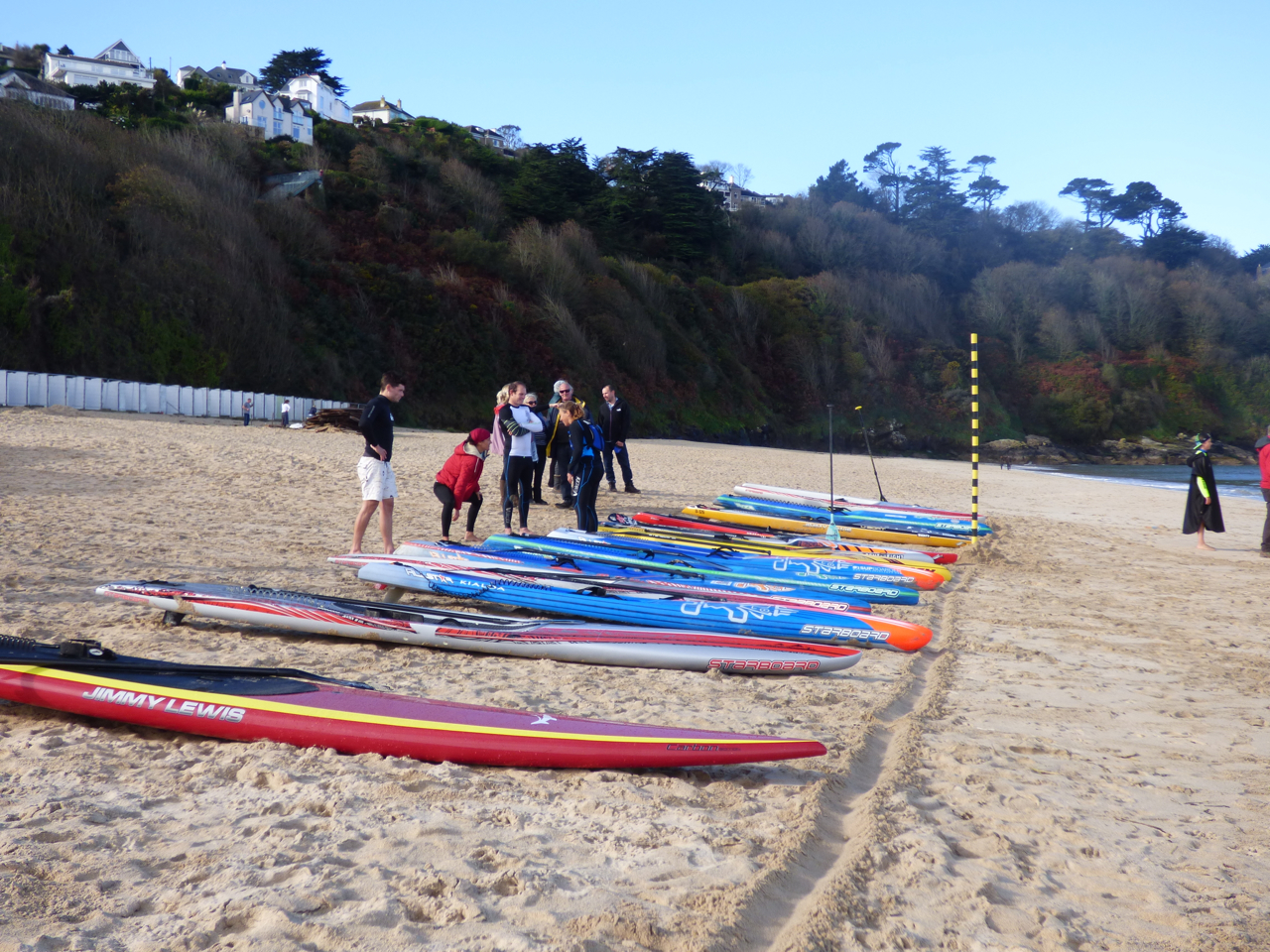 The wind meant that instead of a three lap 18 km race only two laps were to be completed. The course was roughly ‘L’ shaped with a beach start. Competitors had a short leg to the first buoy, clockwise around that and downwind to the second turn. Clockwise again and ride the swell inshore to the next buoy. Anti clockwise around that, which was a 270 degree of buoy-turn-technique-test before paddling straight into the wind for a character building grind back to the bay. Pass the start / finish to a buoy further up the bay, turn and repeat.

Before the start there was the usual catch up on the beach, tweaks to boards and some nervousness from competitors. Everyone was looking out to sea trying to guess the wind strength. For some the lack of surf was a blessing whilst some were wishing for a more challenging start.

At noon 14 SUP paddlers and 4 prone paddlers lined up on the beach for the start of the distance race. Under the experienced eye of Glenn Eldridge from the Ocean Sports Academy competitors sprinted down the sand and took to the water. From the first turn it was obvious that conditions were extremely tough, Charlie Jones retiring after 400m or so with a technical problem.

At the front Ollie Shilston, Paul ‘PJ’ Simmons and Damien Warner were setting the pace with everyone else trying to hang on. Mid pack Jason Sawyer was racing Marie Buchanan and initially the 4 prone paddlers were near the tail end as the SUPers used the wind to good effect.

Watching from the larger of the two safety RIBs the day was an education in paddling technique, balance and determination. Even the downwind leg was tough with the variable wind and unpredictable swell making riding bumps harder than it should have been. At one point we were shadowing Ollie with an indicated speed of 8 knots, that was downwind!

After the second turn Shilston had a small lead over the chasing Simmons and Warner. At the third turn, heading back into the wind and swell Shilston took a harder line, diagonally through the surf straight into the wind, with the others staying nearer the shore. This was the moment the race was won. His decision (gamble?) to take the conditions head-on paid dividends with his lead increasing on every stroke. The surf zone and return to the beach was where the race was decided for most paddlers and this was where the prone paddlers made huge inroads to leads that the SUP paddlers had from the downwind section. Their speed into the wind was astonishing.

The second lap was, if anything, harder than the first as the wind picked up and the swell became even more unpredictable. On the RIB we were watching the paddlers, with James and Lucy continually counting them as well as looking out for larger waves. Keeping an eye on the prone paddlers was harder then the SUPers as they vanished between each set to reappear some distance away. With the gaps between the lead paddlers established our focus turned to monitoring the rest of the field, and with paddlers free to take their own lines positions seemed to swap regularly with mini-battles throughout. Carl Sawyer impressive on his Jimmy Lewis while in the ladies event Ginnie Odetayo seemed to get better on her Starboard as the conditions got worse.

At the finish, after over 90 minutes solid paddling finishers had a thankfully short sprint back up the beach. Every single one of them deserving recognition for their achievements on the course, completing a well organised race in challenging conditions.