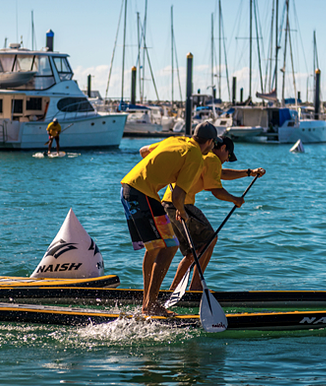 Worldwide SUP board brand Naish, has come on board as a major partner of the 2016 Whitsunday SUP Challenge.

With the Naish One board already a favourite on the international SUP racing scene, Naish Australia felt it was only natural that they should sponsor the week-long SUP and sail event in the Whitsundays.

Reservations Manager of Whitsunday Escape, Alita De Brincat, said what a coup it was that such a respected brand had jumped at the chance to support the Whitsunday event.

“We’re really proud that we have developed an event worthy of Naish’s support and are proud to welcome them on board for the 2016 event as a major partner.” Alita said.

“We used the Naish One boards in the 2015 event, as they were a favourite of our Race Directors, Adrenalin Rush Sports, and we can see why.” Alita said.

For the 2016 event, Naish Australia will provide the Naish One race boards for the competitive division as well as a number of prizes for competitors. The N1SCO race format will be introduced for a number of the week’s courses.

“With a level playing field in terms of board technology, and everyone has the best board with the Naish One board, it leaves the paddlers to battle it out in the traditional way – sheer power.” Alita said.

This year will also see the introduction of the N1SCO race format to create an exciting atmosphere that racers will be familiar with.

“Their support in terms of promoting the event is sure to attract attention from international athletes, which is just what we had hoped for as we grow the event in line with the 5 year plan.” Alita said.

With sprint races on Whitehaven Beach and a long course downwind race up to 14km this event is sure to test even the best.

“The big one takes place from Hamilton Island, downwind across the Whitsunday Passage to South Molle Island, a distance of around 8 nautical miles, or 14km,” said Alita.

Both amateur and competitive paddlers from far and wide are invited to take part in the most unique SUP event in the world: the only week-long SUP event to take place around the pristine islands of the Whitsundays, from the deck of a charter boat.

The 2016 Whitsunday SUP Challenge will take place from 8 – 14 May 2016, departing from Airlie Beach, with Whitsunday Escape as major partner. There will be a diverse program designed to attract amateur and professional stand up paddle boarders, within a fun, social atmosphere.

More details are on the SUPboarder Events Page here.

Those interested in taking part should first gather a group of friends who also want to participate and then choose a boat. Further details are still to be released, but event pre-registration is now open on the website www.whitsundaysupchallenge.com.

New this year, a skippered boat option will be offered for pairs who don’t have a group to travel with and don’t wish to hire a whole boat. Accommodation will be in a private double cabin and the price includes a skipper & hostie as well as meals for the week.

The Whitsunday Islands set the scene for an epic week-long event of sail and SUP. Grab your mates, choose a boat, and challenge yourselves to the best week of stand up paddle boarding. Two divisions, Competitive and Cruising, allow both serious and not-so-serious paddlers to compete side by side with competitors of equal ability. There’s a full social calendar, new friends to be made, and uninhabited islands to be explored in down time. Join us for a week in the Whitsundays that’s unlike any other.

Naish Australia will be hosting the 2016 N1SCO Championships in Manly Cove, Sydney next October. Naish Australia are the official board partner for the recently completed Red Bull Water Maze on the Gold Coast, and the upcoming Roxy Run SUP Yoga event to be held in Manly, Sydney this weekend. N1SCO stands for Naish ONE (One Design and also International) SUP Class Organisation, and is an internationally recognised race format designed to make SUP races exciting, fun and fair.