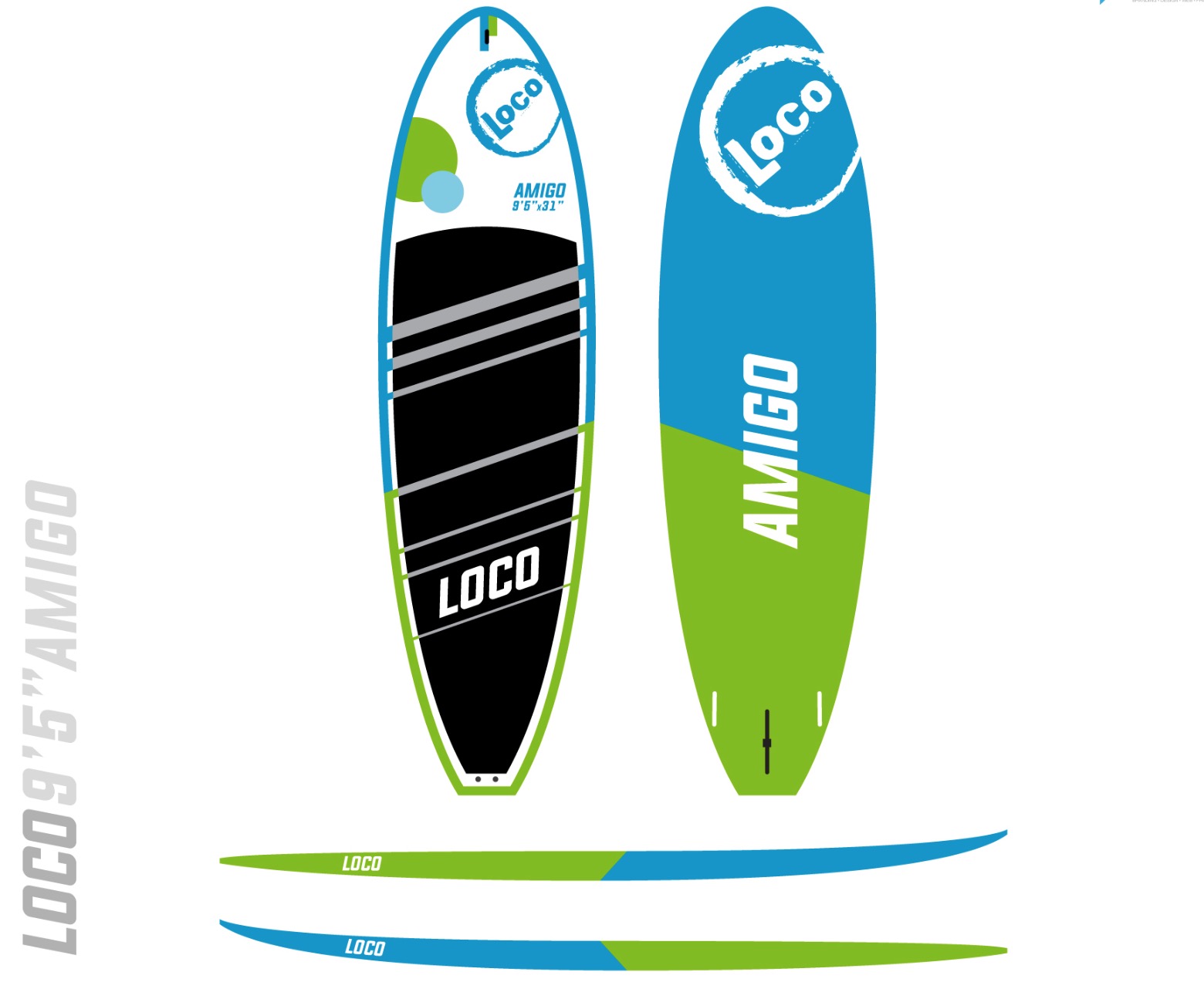 UK based board brand ‘Loco’ have been busy and working hard on their fresh new range of boards for the coming season. Loco are known for their distinctive colour ways, and have revealed a totally new look for next year due to hit the UK shores this autumn. We look forward to seeing and testing the new gear soon. But until then here’s a press release from Loco SUP about the future of Loco and their new look.

UK SUP, Surf & Kite brand Loco have been busy working on their new ranges over the last few months so we thought we’d catch up with boss man Joe Thwaites to see what’s changing and what’s new from the Loco Asylum.

So what’s been going on Joe?

It probably makes sense to contextualise the reasons for the changes before talking about the new shapes and changes to our existing ranges. Over the last couple of seasons we’ve seen a couple of new brands enter the UK market offering ‘trade prices’ which was effectively our strategy 3-4yrs ago although we’ve always erred towards offering premium £1000+ constructions for £699-1199 working with some of the World’s most exciting shapers . When we first started no one was offering full wood veneer boards but as time has gone on every copycat brand has flocked to it so it’s definitely time to refresh our aesthetic.

So does this mean you’ll be ditching your price point glass construction as well?

Having worked with factories in China with varying degrees of success over the last few years we’ve had the opportunity to test a wide variety of constructions. It is possible to have boards made for buttons in China but they’re normally really heavy or fall to pieces quicker than most people would like. It’s always been our goal to produce affordable, lightweight and durable boards at the price point end of what we do and deliver comparable weights with enhanced performance at the aficionado end.

We’re pleased to announce that we’re now working with a couple of first-rate factories who only use the best grades of EPS and buy in their cloth and resins from the USA to ensure quality is seldom compromised. Although the glass boards certainly sell well and their durability is proven we found them slightly heavier than ideal and the bright monochrome colours were in need of an update 3 yrs on so we’ll be discontinuing these once our current stock runs out.

So what’s new with your all-rounder range?

The new ‘Amigo’ range builds upon 4yrs of continuous development. As I mentioned we’ve ditched the bright colours and classic wood finishes and have come up with a playful yet stand out design which utilises a clever lightweight bamboo sandwich construction to deliver durability without the weight. Despite the 8’11’’’s previous championship successes we’ve decided to axe this model as we’ve found most lightweight beginners continue to opt for 9’-10’ wider style boards and intermediates want a pointier nose or a short SUP so we might as well give people what they want right? In terms of the 9’5’’, 9’11’’ and new 10’5’’ these boards have had minor changes to the rocker lines and the hull dynamics have been re-tweaked so they perform just as well in windSUP mode as they do in paddle mode. The 9’5’’ and 9’11’’ will continue to be the strongest sellers with the 10’5’’ being the big boy’s weapon of choice with 200L. The 10’5’’ will also double up as the perfect yoga platform for ladies looking for a wide stable board. We’ve decided to offer the windSUP mast track as standard across the range so customers are effectively getting two toys for the price of one. Alongside the killer white/green/blue design we’ll be offering a white/green/purple colour-way for ladies which will be a pre-order only option.

We’ve seen your Short SUPs getting props with competitive SUPers over the last couple of seasons. Any new developments with those boards?

Our existing line of short SUPs have been rebranded ‘El Toro’ and have seen some subtle tweaks with us adding a flatter section in the paddling area for improved glide without making the tail excessively wide or changing the rocker. The new graphics are simply killer and the lighter construction will deliver better response. I still maintain these boards turn better than any ‘door type shape’ and moreover they don’t top out in chest high waves! That said, we’ve been working on a couple of new flatter rockered short shapes on the DL for quite a while. We had our ‘stoke button’ tickled by some parabolic railed boards coming out of Spain about 18 months ago and with the onset of Firewire’s Cornice we thought we’d make some SUPs along similar lines. We’ve arrived at two very different shapes with the ‘Aztec’ being more of channelled Vanguard-type shape with concave rails and narrower widths and the ‘Grenade’ with wider hips and a much narrower tail which is set to split opinion although the latter is still very much at proto stage. Again these boards look killer and benefit from lighter standard constructions. We’ll offer the Toro and Aztec models in our new featherweight carbon construction on pre-orders. We’re also offering all models with 5 fin boxes as standard.

We’ve admired your comp pro boards for quite a while now so are there any changes happening with those considering they’re quite new to the market?

R&D is at the forefront of what Loco does so we’re always working with our riders to further enhance established and relatively new shapes. Despite the old comp pros working exceptionally well in capable hands we decided adding a slightly flatter section would deliver better glide when paddling for the wave. We’ve also tinkered with the dimensions and volumes of the 7’2’’ and 8’9’’ and added a new 9’2’’ for intermediates or heavier experienced riders. The graphics have been given a complete overhaul and we’ve named the range ‘el Diablo’ to fit in with similar shapes in our new surf and kite ranges. We’ve also opted for a kick tail to save some weight and will be offering the boards in the new lightweight bamboo construction as well as featherweight carbon/PVC.

We’ve also seen a beautiful new printed cloth nose rider on Instagram…what’s the deal with that?

The current nose rider has proved very popular but again we found the generic brands aesthetic was very similar to our classic wood so we’ve decided to give our range a more premium feel. We’ve also added a new 11’ x 30’’ which will prove popular with older guys and long board purists coming over to SUP. The tail shape has also been changed from a pin to a diamond. 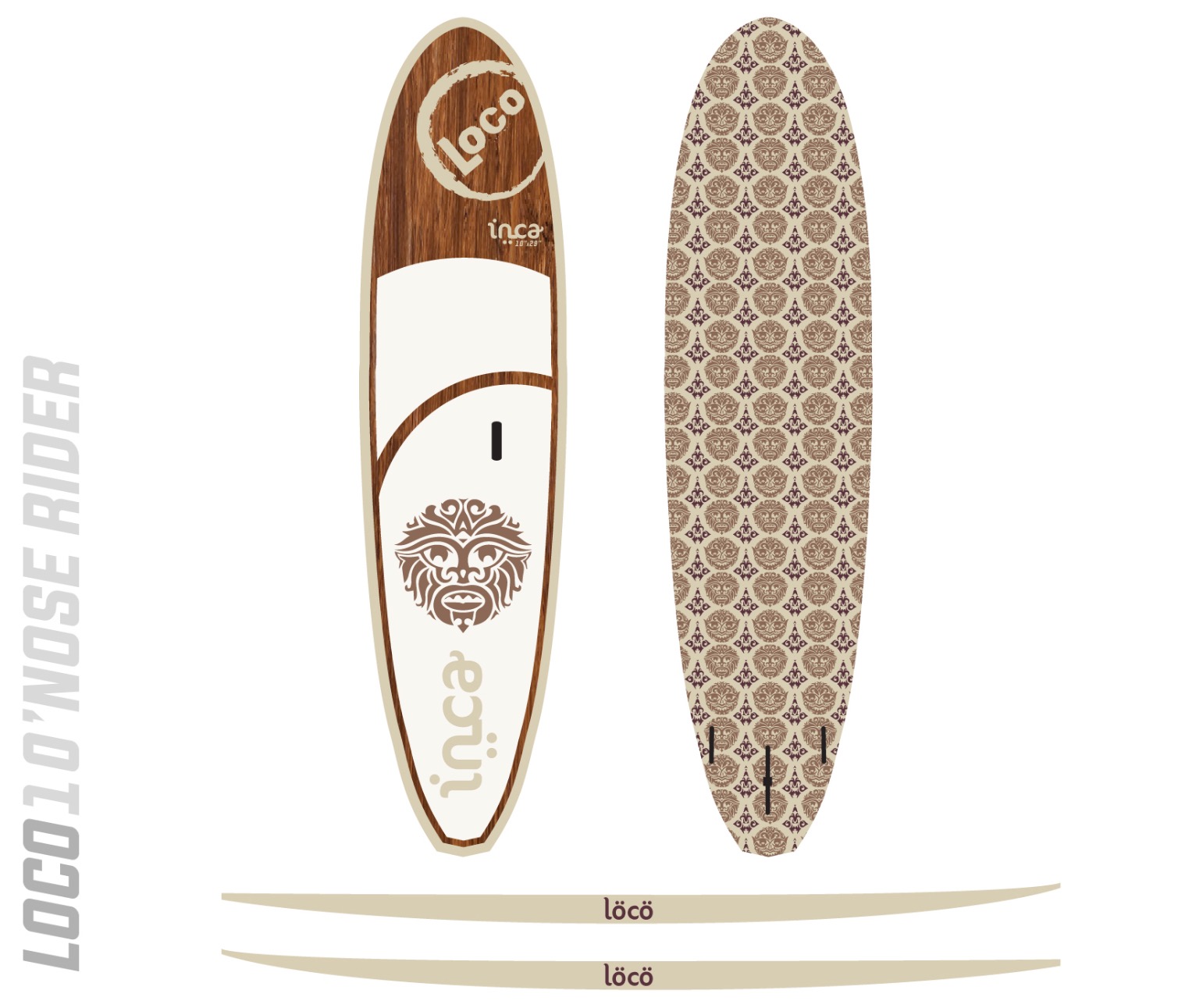 So what about your race range any new developments there?

We’ve been working with a new American shaper with a view to refining our race boards as we felt last year’s Pro Race had far too much rocker to be competitive on flat water (where most of the UK races take place) so we’ve substantially decreased the tail rocker and added some extra nose kick. The aesthetic is currently being overhauled. The construction will remain lightweight carbon but we intend to add some better grab handles. The boards will be available in 12’6’’ and 14’ across 26’’ and 28’’ and we’ll also be offering a kid’s 10’6’’ x 22’’ or 24’’ in a cheaper lightweight construction. We already have foreign interest in the kids boards so we’re hopeful of similar levels in the UK. We’ve decided to call the new boards ‘Motion’ as in Locomotion partly tapping into some local NE heritage and also the design looking similar to a Japanese bullet train. We’ll have matt green and purple colour options which should appeal to both sexes. The shape has worked so well we’ll be offering a slightly detuned version in 30’’ and 32’’ which will replace our existing race tourers.

Anything else we should know about?

We’ve finally managed to source the ledge style handles which will make the boards much easier to carry. We’ve upgraded the fins across the whole range now offering wood inlay, hexagonal cell fibreglass and fibreglass/carbon mix depending which model you go for.

Alongside tireless development with our SUPs we’ve also build upon ‘testing’ a limited number of surf and kite shapes with some advanced riders this season. The feedback has been largely positive although some minor amends were necessary which have now been incorporated. We’ll be running with two directional kite shapes for next year ‘The Zombie’ which is a channelled Vanguard style board and the ‘El Diablo’ which is more of a conventional rounded tail thruster. Both shapes have lost some volume so perform better in higher wind and we’ve added carbon rails for enhanced strength over the lightweight bamboo sandwich constructions as well as adding some printed cloth graphics to make them pop!

For the surf lines we’ve moved away from the bright colours realising that surfers generally want to blend in so we’ve gone conservative with monochrome black and white graphic with limited branding and carbon heel bumpers. That said we’ve carried through some of the kite and SUP themes through onto these boards so they’re still ‘loco’ enough to stand out in the line up. The construction will be bamboo sandwich which means they’ll be lightweight and durable.

So how do people get their hands on any of these sexy new sticks?

If direct customers want to be some of the first to own a new Loco and would like to choose their preferred colours and construction pre-orders are now open for Sept/Oct delivery where we’re offering a 10% discount on price point boards and 15% on carbon across the whole range.

Any shops, schools or hire centres looking to buy boards in volume we’re now offering a ‘trade price’ based on a MOQ. We’re also well placed to speak to foreign distributors about volume orders and think they’ll be pleasantly surprised with the margins. Anyone keen to discuss an order should contact me directly on +44 191 4206921 / +44 7779 127230 / info@loco-sup.com