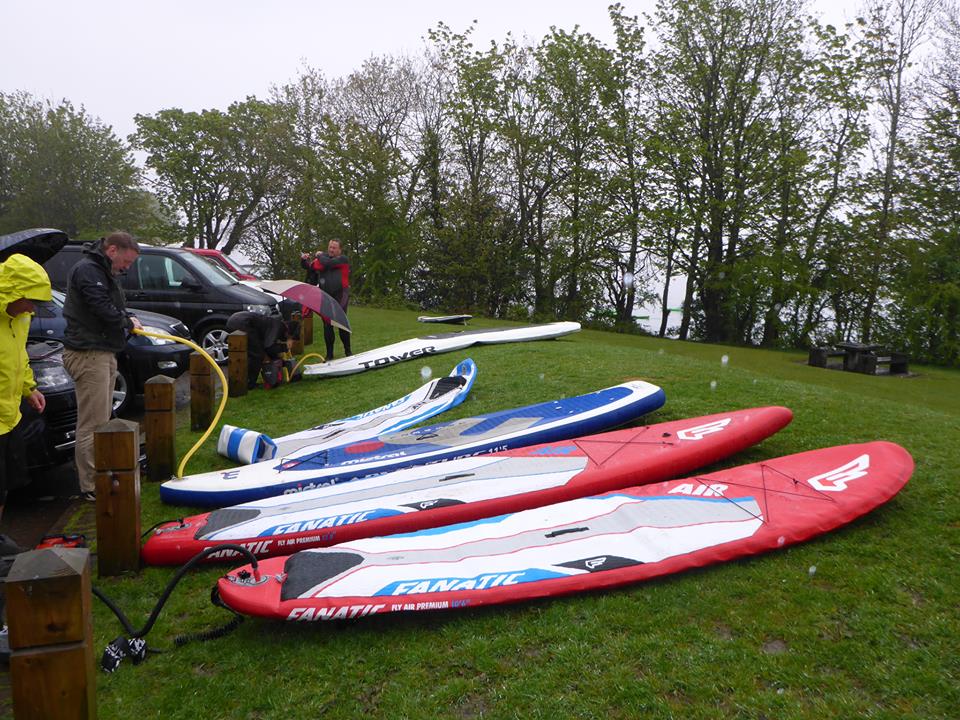 Hot on the heels of the successful gathering of Scottish SUP surfers at Belhaven Bay early May the touring fraternity recently held their inaugral meeting on the Bonnie Bonnie Banks of Loch Lomond . The Coast to Coast crew had set the ball rolling by organising the C2C Longboard and SUP surfing competition which was probably the first formally organised SUP competition in Scotland and it was time for the touring family to literally stand up and be counted. Organiser of the new Scottish SUP Touring club and owner of SUP Ecosse Ian Cormack explained how the new club came around and their plans for the future.

At the beginning on 2015 via the popular SUP in Scotland facebook group we attempted to organise a multi discipline SUP gathering sometime early summer based solely around fun for surfers, river riders, tourers and newcomers alike but the difficulty was trying to find a suitable location to suit the needs of everyone . After batting several options around it became evident that it was going to be very difficult to please everyone so I set up the touring club not to rival SUP in Scotland but to provide a regular meetings and a focal point for the touring minded paddlers north of the border. Most members of the Scottish SUP Touring Club, if not all, are members of the SUP in Scotland group too which goes to show that SUP in Scotland is definitely on the rise.

Originally I named the group West of Scotland SUP Touring Club as I believed it would just be a small amount of predominantly localised tourers meeting for a paddle and a coffee but as the group started to gain momentum it was obvious that the group was also opening up to East coast paddlers and even people from south of the border who wanted to attend and contribute towards some of the paddles we were planning.

The Group has gained 40 members in the first two weeks and with the help of Pete Cockill we had made the decision to go with a Clyde Glide over at Helensburgh. As the date got nearer it was then decided a change of venue might be wise and so Loch Lomond on May 10th was chosen . ” We sat looking at the weather all week and it was looking pretty marginal which probably put off people who were having to travel any distance but decided to persevere anyway and go with the flow. I was expecting maybe 5 at the most and just before the arranged meet time Jeff, his wife ( who wasnt going to paddle that day ) and myself stood under a tree sheltering from the rain doubting whether we had made the right decision or not but within 10 minutes the car park filled up resulting in probably the largest number of touring boards ever gathered in one place in Scotland.

After surveying the weather , our options ( based on a decrease in weather conditions) and the standard of paddling competence we all pretty much agreed we had nothing to lose and by 1130 there were 11 SUP Tourers on the Loch heading off into the mist which was something probably not seen north of the border before- the number of boards not the weather ! Our optimism and endeavour was rewarded and within about 10 minutes of heading south east from Luss the rain stopped , the wind dropped and the sky cleared- a little.

Amongst the group of 11 we had 3 hard boards , 8 inflatables, males, females and a pretty wide age demographic and standard of paddling competency but it didnt seem to matter and the group pretty much cruised along chatting and taking in the scenery, experimenting with paddle techniques , working on turns and board skills and tried a number of each others boards which was a valuable experience which tends not to happen that often given that a lot of tourers tend to paddle alone these days. We had contemplated splitting based on standards allowing people who wanted to test themselves slightly more to go ahead but as it happened we stayed together for the whole paddle .

Given that any part of a SUP touring day out has to include post paddle tea and cakes on return to Luss car park the group retired to the very popular and excellently situated cafe to discuss what they had achieved, the next date for a meet and generally all things SUP.

Judging by the talk in the car park ,cafe and facebook posts on the Group page all in all it turned out to be a surprisingly successful day despite the initial doubts that were predominantly centred around the weather but like we said ” if you wait around in Scotland for the best weather window to do any sport you could be waiting a while “.

The Group have already started working on plans for the next get together which will probably result in a trip to the Clyde canal as we attempt to try and spread the love across the group and so the same people dont end up always doing the lions share of the travelling with future meets discussed at Troon, Falkirk, Edinburgh and Ayrshire.

” We are hoping, by arranging our dates and locations carefully, that in the early stages we can increase our members and attendees everytime we meet. This will inevitably over time necessitate a group split at the event to allow people to progress at a rate that is comfortable to them whilst also allowing more enthusiastic and experienced paddles to push on a develop their skills – but still meeting up post paddle for the obligatory refreshments and analysis”.

The plan for the future is to develop the club to a more formal organisation and I am in the early stages of talking to UK SUP to discuss the procedures, infra structure and legalities of forming a regulated club should the current member base decide they would like to go that way.

Whichever way you look at it May was a great month for SUP in Scotland given the popularity of the Belhaven contest and the Lomond meet and the future looks bright for all disciplines of the sport moving forward.

Hi
Just checked the clubs facebook pages.? There doesn’t seem to be a lot happening ?
Are they still active ?
I live near Glasgow and was looking for a small club for meet ups ?
Mostly done fresh water, but keen to go coastal trips.
Regards
Stevi