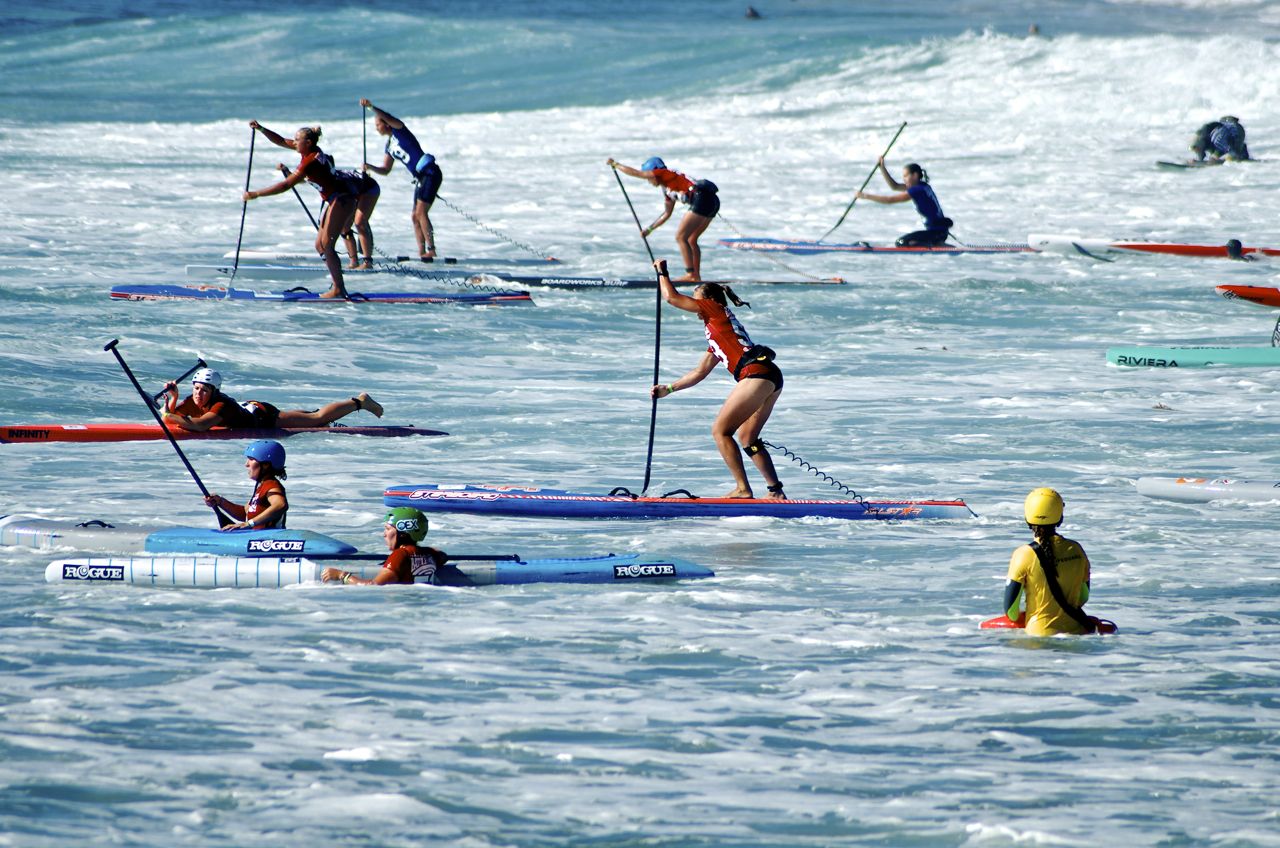 Lots of swell, lots of competitors and lots of carnage!! The 2014 Battle of the Paddle in Salt Creek, California had it all! And Starboard UK riders Peter Kosinski and Marie Buchanan were there to be part of it… competing and soaking up the atmosphere. Having recently returned from the event, SUPboarder caught up with the SUPboarder Team members to find out what it was really like to compete in the big BOP…

SB/Did the transport of yourself and your equipment all go well out there and back?
PK/I picked a board up in Cali so getting there was easy but coming home myself, Ryan James and Sam Ross had a bit of a nightmare 2 hour check in with 6 boards and a paddle bag.
MB/All good: we collected our new race boards from the Starboard distributor, which we’d ordered months previously. We hired a car with a roof rack so no problems taking them to the beach. Virgin Atlantic were fantastic (they appreciated us warning them about our baggage ahead of travelling)

SB/ The conditions and the size of the race fleet out there looked amazing but what was it really like to compete in the race?
PK/The 2014 Battle of the paddle was my first race outside of Europe and competing at the event was amazing. Lots of super stoked people with a common passion for the sport.
MB/Having seen and heard about numerous damaged boards from competitors practicing in the previous days, I was a little nervous. I’ve SUP-surfed waves of that size many times before but never on a 12’6″ race board so the build up was rather tense for me.

SB/When the race is under way and you run off the beach do you find that you are just fully focused on the task ahead and it’s hard to keep your cool even when it comes to the balance of race etiquette and winning?
PK/I had two terrible starts and was focused on just punching through the waves cleanly. My competitive nature doesn’t always help when you have to deal with waves. I sometimes make mistakes in those situations as I pick the wrong line through the line up and get taken out by the sets.
MB/With competitive instinct comes a certain ruthlessness that some might not consider particularly lady-like! My personality does change in “race mode” and I’ve been known to shout (and even swear) at rivals on the course but there are boundaries I wouldn’t cross. For example, I will attack a buoy-turn and risk bumping people around me but I would never deliberately ram someone to knock them in!

SB/What were your results and were you happy with your performance?
PK/My performance was not great to be honest. I have been back in school since September and getting training in the waves is almost impossible for me as I live in land. I finished in 40 something place in the elite race qualifier and got 3 rd in the junior stock distance race.
MB/22nd in BOP technical race. I was pleased with my speed but after a nightmare start I definitely could have been further up the fleet.
I competed on a 12’6″ board in the distance race so wasn’t up against the elite ladies on 14′ boards. The standard in the open fleet is still pretty good though so my 3rd place and first in age group was quite satisfying.

SB/From a spectator’s point of view the crashes looked amazing and brutal. Were you involved in any crashes and if so any injuries?!!
PK/Thankfully no. I survived with not even a scratch on my new 2015 starboard All Star.
MB/I avoided impacts with other riders’ boards but I took a hammering from relentless overhead surf trying to get out on the first lap of the BOP race and  exactly the same in the Distance race!

SB/BOP and waves go hand-in-hand. But do you think there will be a point when the waves could be too big to be safe?
PK/I think it all depends on the location and the wave. For example Salt Creek is a pretty hollow wave compared with Doheny. If the waves during the B.O.P at Salt Creek got any bigger it would have been a major risk to run the race but the top athletes dealt with the conditions given to them and always do.
MB/Depends on how much space people have on the start, the ability of the riders and the kind of waves. Short-period waves with howling wind can be near-impossible but even though the sets at Salt Creek were quite meaty, there were lulls where good timing gave us opportunities to paddle out. Now everyone has seen what Salt Creek can deliver, we have a whole year to prepare for what 2015 might bring!

SB/Would you like to see more great BOP races like that over in Europe?
PK/Yes… BOP races are so much fun they provide spectators with lots of action and the athletes have to deal with waves and the beach run. They are difficult to organize from a event organizers point of you and a lot of risk involved hence we see very few in Europe.
MB/That type of race is amazing but certainly here in the UK we don’t yet have enough competitors experienced in large surf. Perhaps if races were limited to waist to chest-high surf they would be more accessible and allow riders to build their confidence without absolute carnage!

SB/Did you see the altercation between Kai Lenny and Conor Baxter? What are your thoughts about it?!! (watch the Connor interview about the incident here)
PK/When I saw it happen I actually thought Connor just fell by mistake taking Kai out with him. My thoughts on it is that this would only happen between those two guys. They were both in the wrong Connor should have never cut back in to Kai and Kai shouldn’t have grabbed on to Connors board.
MB/In sport when there are two arch-rivals desperate to win, sometimes the boundaries are pushed or exceeded. In the heat of the moment things can happen that may not demonstrate perfect sportsmanship but make for entertaining viewing. It’s not like they were having a punch up on the beach! As long as the industry and media don’t allow the rivalry to escalate beyond sporting competition, Baxter vs Lenny will continue to enthral viewers across the world.

SB/Are you planning to go out next year?
PK/Yes….I would love to spend a month in Cali next year but who knows what will happen in a year.
MB/I would definitely like to!

SB/What was your favourite part of the whole experience?
PK/Watching the elite final….The whole trip was a big learning experience and motivates me for next year to come back stronger.
MB/Crossing the line in both races to cheering crowds. It feels like there’s a lot of respect and encouragement from the thousands of onlookers.

Photo thanks to Crispen Jones and Peter Kosinski.

A huge well done to Peter, Marie and all the other UK riders who took part in this years event. We can’t wait for the 2015 BOP!