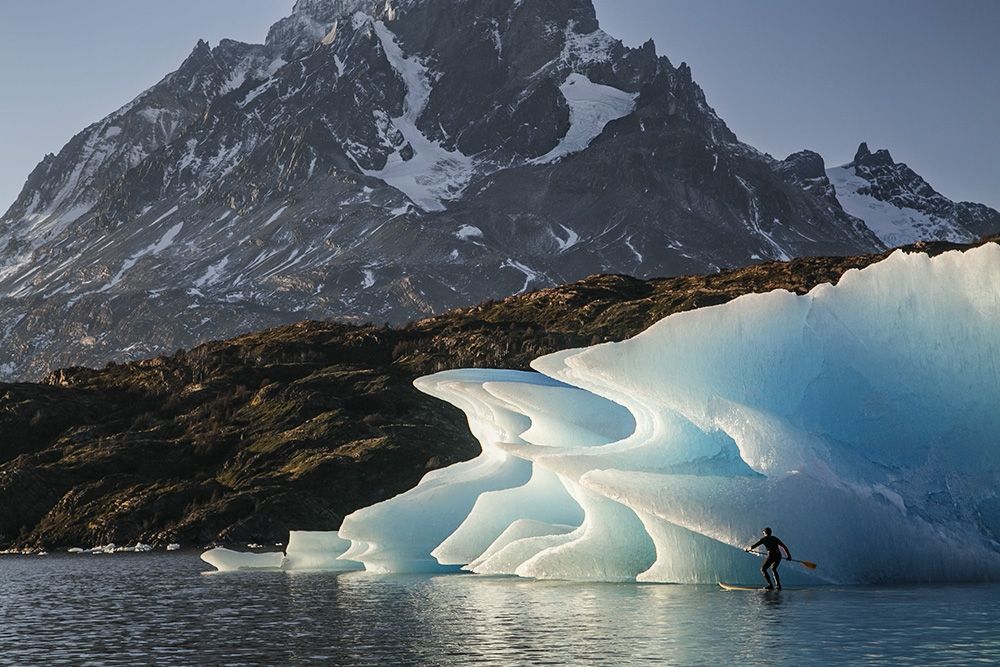 Aussie Chris Theobald is a stand up paddleboarder, mountain guide and journalist in the Torres del Paine, Chile, Patagonia. Driven by a desire to paddle in incredible places Chris left behind his beautiful home, headed to Santiago to buy a board and then set off on a glacial ice SUP adventure.

This incredible SUP Patagonia experience is shared with us thanks to the mind blowing photography by Marcel Urbina Tarifeño. And with an important environmental message, to ensure we sustain such beautiful environments to paddle in. Chris tells his SUP story…

I love Chile, particularly the far south – Patagonia. There are many differences between the culture here and my home country – Australia. To kiss a woman on the cheek when you first meet her or to greet a random person you pass on the street are the norm here.

Here the people are friendly and simple – some of these people have never left their hometown, and are content in not doing so. To be fair, they do live in one of the most beautiful places on earth.

So as you can imagine, a “gringo” arriving to Patagonia, especially to Torres Del Paine national park, with a giant 12 foot stand up paddle board would turn some heads!

I have always wanted to do an extreme sport in an exotic place, ever since my days (years ago) as a sponsored skateboarder. And what’s more exotic than paddling next to glacial ice!?

The adventure started after I left Punta Arenas to collect my new toy.

Waiting at the bus station at 3pm I called to confirm that it should have arrived about 2pm from the surf town Pichilemu. “It will be sent tomorrow to the airport, as it didn’t fit in today’s bus.” A quick (and expensive!) call to my airline changed my flight to the next afternoon and I was off to Bella Vista for a cold beer.

Next day, wheeling my board to the LAN Airline desk I saw the stewardesses giggling at the sheer size of my check in luggage. Trying to avoid an extra charge I asked the girl her name. “Paula hey? Well, I just got this new board and she needs a name – can I call her Paula?” Another giggle and my board was on the conveyor belt – at no extra cost!

After putting the board on the roof-racks of a friend’s Jeep, I was off to the bus terminal for the next part of the trip – three hours to the quaint and comfy little town of Puerto Natales.

“The board won’t fit in the bus, you can’t get on with that,”

Said the guy behind the desk, bewildered by the surfboard-like monstrosity going to a freezing, wave-less place at the bottom of the world.

I made a call to a friend (whose girlfriend’s dad runs the transport department) and “Paula” was allowed on. Gracias Basilio and Cony!

The hotel, Tierra Patagonia, where I guide for in the National Park Torres del Paine had organised transport for its staff with another company to the hotel (another hour’s drive away) across a valley known for its extremely strong and dangerous Patagonian winds.

As we were waiting for bus to arrive, a dark-haired and beautiful girl crossed the road and asked if we were going to the same hotel. This particular day turned out to be one of the most important and special days of my life – I met my now girlfriend Catalina who was about to join our team of guides – perfect! Although I knew I would make this girl mine I tried to play it cool and casual. What didn’t help my cause was that the boss of the transport refused to let my board in the van due to safety and size. An Aussie guy trying (unsuccessfully) to persuade a rather obstinate and increasingly irate local was not “playing it cool”. So with all eyes on me (including Catalina’s) I needed to resolve the situation and get my SUP on that bus.

My last resort was to ask if I could fix it to the roof (a potential risk due to the winds I mentioned earlier – gusts can get to over 150km/h). The answer was a strained and matter-of-fact “yes, but you don’t have any rope and the bus leaves in five minutes!” I quickly ran to find a taxi but none were in sight so I jumped in the first “collectivo” (a car which runs a set route for a fraction of the price) hoping it would get me to where I needed to go. The driver confirmed we would pass a hardware store – luck was on my side! Two minutes later I was buying rope and calling a friend to do a speedy pick-up outside. When we arrived everyone on the bus was waiting to leave.

‘I climbed up on the roof like a monkey on heat and with some help from my fellow workmates secured the SUP and we were on the road.’

Content with my success and that the show must have been entertaining for a lovely lady sitting in the back behind me, I enjoyed watching the pampas fly past (with no sign of wind!).

On a ranch near the entrance to the park, we slept in a freezing farm house with no electricity, heating or hot water. It was the beginning of a Patagonian winter. The trip was made up of two well known photographers, Marcial Urbina and Daniel Bruhin W, and one eager young stand up paddle boarder ready to get some incredible shots – weather and light permitting.

We woke to a freezing, crisp, fresh and windless day, like many days in winter.

With a quick visit to the administration area of the park I was granted permission by the rangers (CONAF) and superintendent Federico Hechenleitner Carrasco. They re-informed me of the increasing risk of  a growing disease – the horrible snot-like algae called Didymo that spreads through waterways, covering the entire river or lake bed, due to the lack of cleaning of boats, fishing gear and kayaks after and before entering waterways. It has actually affected over 70% of the bodies of water in New Zealand and is threatening to hit Torres del Paine after contaminating Chile’s Lake district and Patagonian Aysen. Remember, we must look after our environment to ensure we can continue to paddle, fish and navigate incredible places such as this!

The sun was setting as we walked from the end of the road down to the Grey Lake. At the end of a peninsula I saw what looked to be a huge iceberg which had broken off Glacier Grey, a finger of the huge 13500 square kilometre southern Patagonian icefield – the third biggest water source in the world after Antarctica and Greenland.

I paddled from the shore on that smooth cream coloured lake heading towards the end of the point. The iceberg was even bigger than I first thought and within minutes I was going in and out of huge ice caves standing proud on my new toy while the crew shot photos ecstatically before the sun disappeared behind the mountains. Feeling the drops of cool glacial water on my head while listening to the cracks of the smooth ice around me is something I will never forget.

Paddling away from the huge chunk of electric blue ice, with almost frozen feet under my wetsuit boots, I literally thought to myself – if I die today, I will die a happy man!

man, that is awesome, some nice personal touches in the story too