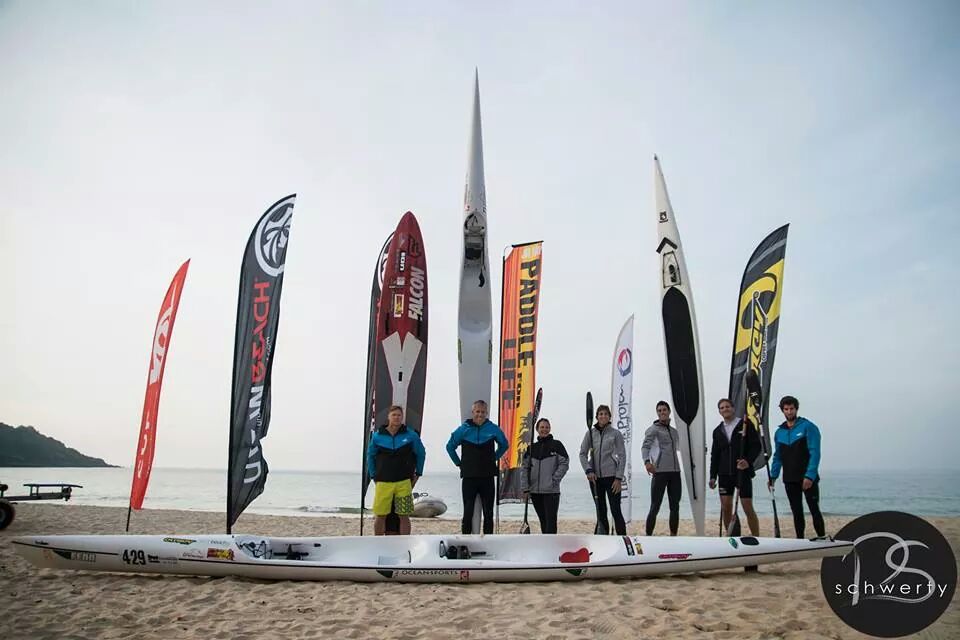 SUPboarder Mark Slater, completed the first ever ‘Celtic Cross Challenge’ as part of a team, on the 18th May 2014, from St Marys to Sennen Cove. It was never going to be easy, but Mark didn’t realise quite how hard it was going to be paddling 50K in challenging open water! Here Mark tells his story…

‘The Celtic Crossing’ was the brainchild of surf and ocean ski super star Glenn Eldridge and big wave supremo Tom Butler. It involved a 50km paddle between St Marys, Scilly Isles and Sennen Cove, Lands End. The plan for this first year was to attempt the crossing with a small group of paddlers on various crafts in an effort to promote and showcase the crossing and hopefully turn it into a big annual event aimed at being Europe’s equivalent of the Molokai 2 Oahu. So the date was set for when the tides looked most favourable and the chosen paddlers were:
Glenn Eldridge – Solo Ocean Ski
Tom Butler – Prone Paddleboard
Chloē Burnett & Tarryn Brown – Double Ocean Ski (Female)
Lewis Kirton & Vincent Naert- Double Ocean Ski (Male)
My good self! – Stand up Paddleboard

The whole thing came about for me a couple of weeks prior to the start date of 18th May when Tom contacted me and asked if I would be interested in joining the rest of the team on the crossing, so obviously I jumped at the chance. On the lead up I did manage to get a couple of training paddles in, but nothing major due to short notice and time restrictions. But having recently competed in the 57mile great Glen Paddle I was feeling I would probably be OK with my fitness.

All the team met for the first time on Fri 16th May and Glenn talked us through the expected conditions, logistics and safety of how things were going to work on the day. Myself, Vincent and Lewis were to head over to St Mary’s Saturday afternoon aboard the Dolly P from St Ives Boats, so we were lucky enough to spend the night on the island.

Sunday afternoon was kick off time, with myself and Tom hitting the water first, but a little later than the 2pm planned start after the interviews with the Skyhawk guys, who are putting together a documentary of the whole proceedings,  and the usual pre match stuff.

For the first hour or so while still paddling through the Scillys we were chatting and taking a few pics, but then as we left the Scillys behind us, things got a little more serious! The joviality stopped and it was constant compass bearings and adjustments to our course from then on. The forecast wind never materialised, and with absolutely nothing whatsoever on the water in front of us I was using the cloud formations to take my compass bearings from. After what seemed like an eternity I started to make out the faint outline of land in front of me. So I stopped for a mo to let the safety boat catch up and asked if it was ok if I left the safety boat and Tom behind, and got stuck in and made a push for Lands End. Up until that point Tom and myself had been told we had to stick fairly close together as we had one safety boat covering the 2 of us.

For the next hour or so I was still feeling OK and fairly strong, but from that point forward things started to get a little more taxing. Progress seemed painfully slow and I knew that the tide was due to turn, meaning I would be impeded by the strong outgoing current. Slowly I started to be able to make out the white buildings on the cliff at Lands End, which gave me a fixed point to aim for… although they were seemingly getting no closer! Then the next big breakthrough was making out the lighthouse just off Lands End and it became my mission to get level with that. Eventually I started to draw close to it, but now with the stronger outgoing current and the waves refracting off the rocks it meant the sea state was rather choppy, and with my legs being in bits I fell in a few times. One time after a fall, I stood back on the board, and tried to help balance myself with the paddle in the water, but got caught side on by a wave. And with the paddle blade still in the water and me still holding the handle I started to fall to one side while the board broached the paddle shaft on the other. Due to our combined effort and forces we successfully managed to snap the paddle shaft clean in half! So it now looked like a nice refreshing prone paddle was order of the day for me for the last couple of miles!

Upon completion I was well and truly spent and learned a very valuable lesson from that journey… I was not mentally or physically prepared for what that crossing had to throw at me. With having done the Great Glenn Paddle a couple of months before, I was quietly confident I would be OK,  especially with the forecast steady SW wind on our backs. But it actually proved far more grueling than I ever could have imagined.

So my little tip to myself for future missions is: try and prepare myself for the worst, then anything less is a bonus!

So in summary, I found the Celtic Crossing an amazing adventure and I feel very honoured and privileged  to have been allowed to be  part of the whole experience with a group of fantastic people. I must say a massive thank you to Glenn, Tom, Johnnie and the rest of the team who put months of hard work and planning into this and along wth the help and support from St Ives Boats, Carbis Bay Hotel and Urban Beach UK, made it all possibe.
And as always a massive high 5 to Fanatic, ION and K-66 for the fantastic equipment, accessories and support. There’s loads more info about the crossing along with ways to get involved, win some cool prizes and help 2 worthy charities at: www.celticcrossing.com
Until the next time 🙂
Mark (Slater)

The Celtic Crossing video will be available to watch on SUPboarder as soon as it has been released… so stay tuned!

Incase you missed it, check out the pre Celtic Crossing SUPboarder article here.