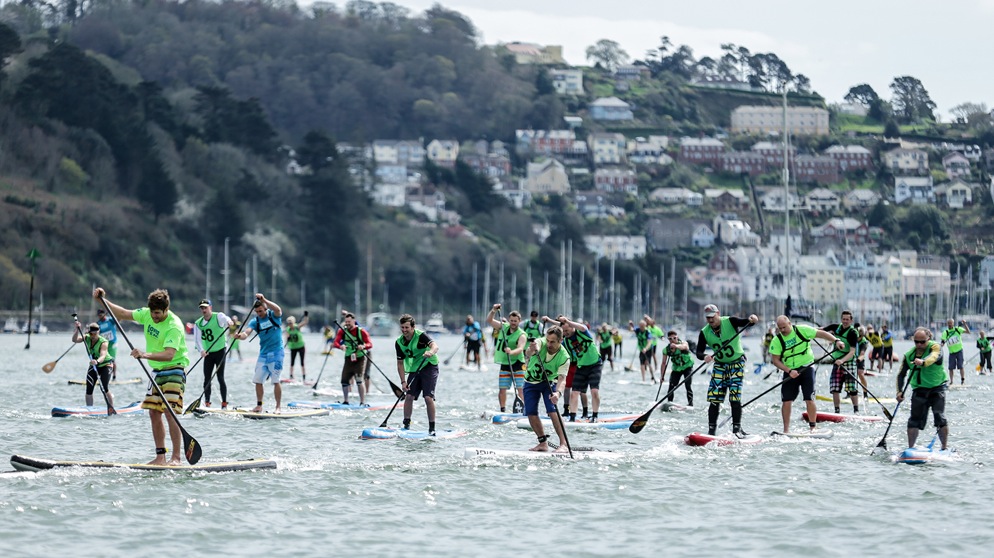 The Ecover Blue Mile teamed up with Naish UK to field 19 paddlers in the Head of the Dart stand up paddle board race – the biggest SUP race in Britain.

150 paddlers did battle in the 13-mile dash from Dartmouth to Totnes on 12 April, with experienced pro (and previous Ecover Blue Mile winner) Ryan James the first man home in a time of 1:24:30.

Ecover Team Go Blue all competed on Naish N1SCO 12’6 air boards. Heading up the team’s efforts was Ben Fisher, who was the first air board paddler to finish. Ben crossed the line in 13th place overall and 6th in the 12’6 class, in a time of 1:31:16.

Ben, 25, from Plymouth, is an engineer by profession but after taking up SUP five years ago now wants to get more involved in the sport: “I’m hoping to do a lot more on the circuit,” said Ben. “I do a lot of water sports but I really enjoy the competitive nature of the paddle boarding.”

Despite the warm sun during the Head of the Dart race, Ben said the conditions were testing: “It was pretty windy and we were paddling into a head wind all the way. I put a lot into it so I was pleased to be up there with the rigid boards.”

Ecover Team Go Blue was taking part to highlight its work with schools and the Marine Conservation Society. This was the second of a series of challenges by the team, following their 60-mile kayak relay at the Great Glen Paddle in Scotland in March. The aim is to spread the word about Go Blue! on 6-8 June, when everyone is being encouraged to do something amazing for our seas, shores and wildlife.

The team was also using the Head of the Dart race to publicise the two flagship open-for-all Ecover Blue Miles this summer – in the Olympic sailing venue of Weymouth on 19-20 July and Plymouth on 13-14 September. The events feature races in the Naish N1SCO series and taster sessions, as well as kayaking and a 1-mile open water swim.

Alex Tobutt of Naish UK said: “The Dart race was fantastic – a fabulous setting and the sight of so many paddlers on the water was great. The times that some of our team achieved shows how competitive the Naish 12’6 Ones are, as well as being accessible for anyone to use.”

Conrad Humphreys of the Ecover Blue Mile is hoping more people will catch the SUP bug at the 2014 events in Weymouth and Plymouth: “There were a lot of comments at the Dart race about what an amazing sight it was and it’s events such as these that attract more people into the sport. It’s exhilarating and it’s a fun way of enjoying our wonderful blue environment.

“We want as many people as possible to come along and give it a try at the Ecover Blue Mile, either in the taster sessions or in the races – once you try it, you’ll be hooked!”

The full results of the Head of the Dart Race have been posted by the organisers, The Dart Totnes Amateur Rowing Club.