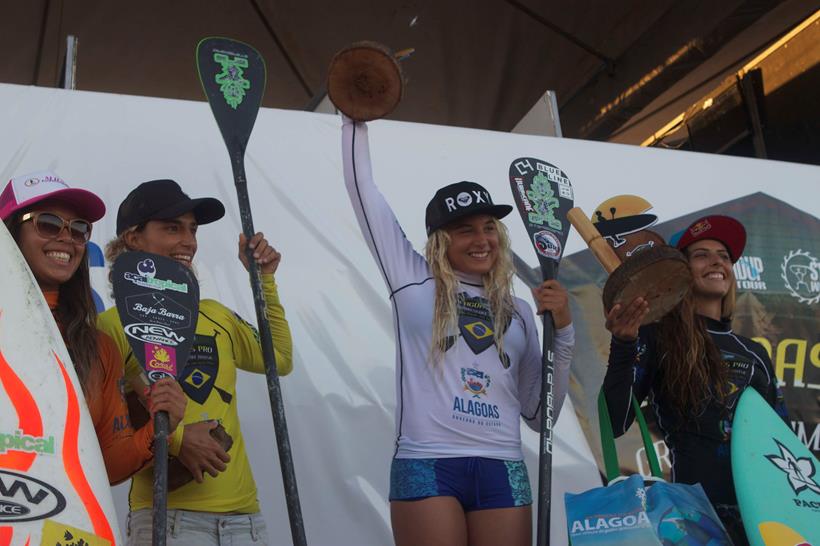 Mens round up from Waterman League:

Caio Vaz secures an emotional win at home in Brazil 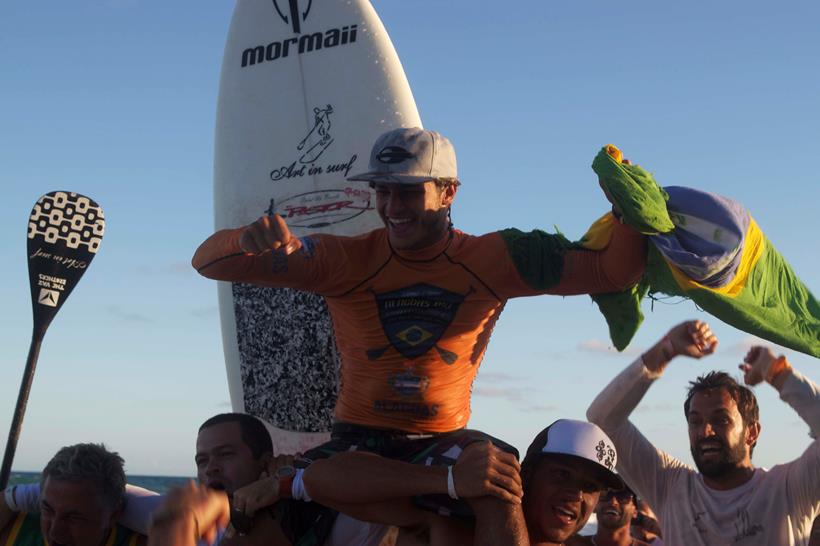 Caio Vaz (Art in Surf) is seemingly unstoppable this year: having kicked off the year with a win at Sunset Beach, Stop 1 of the Stand UP World Tour and after winning the Nationals on the weekend, Caio now storms to victory in dramatic fashion here at the Alagoas Pro Grand Slam in Brazil.The scene was set for some of the most progressive stand up paddlesurfing to date, as the final 16 athletes left in the Men’s elimination opened the day at Praia do Frances with some dramatic action. Caio only gained momentum through the day, taking down big name after big name on his way to the finals.
His semi final against Sean Poynter (Starboard) was one for the ages, as he came from behind in the closing minute of the heat under Sean’s priority to take the win and advance through to the Finals.
But it was in the Final that Caio stepped it up again, posting a 7.5, then an 8.5 and then a 9.5, creating a virtually unsurmountable heat score total of 18 pts, to take the victory over Keahi de Aboitiz (JP Australia).
Caio maintains his World Ratings leader, with 2 bullet wins at Stop 1 and 2 of the 2014 Stand Up World Tour. 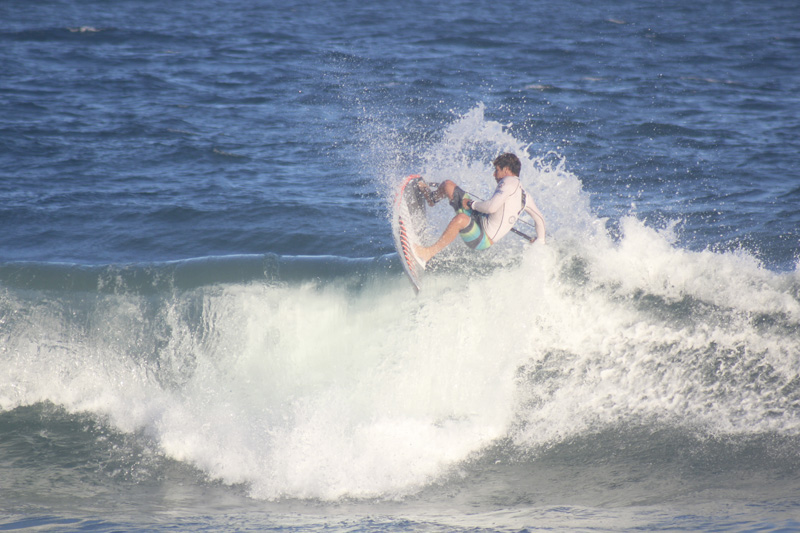 Keahi de Aboitiz (JP Australia) turns it on here at the Alagoas Pro Grand Slam, putting together heat after heat of explosive and radical Stand Up Paddlesurfing.
In his semi final against Ian Vaz (Art in Surf), his repetoire of progressive, above the lip maneuvers put Ian in an combination situation and set the tone for one of the most dramatic finals yet on the Stand Up World Tour.
With a 4th place at Sunset and now a 2nd place here in Brazil, Keahi is showing his true potential here, setting himself up to be a major Title Contender in 2014. Watch out for this impressive talent from down under. He is now sitting in 2nd place overall in the World Rankings after the first 2 events.

Sean Poynter puts together an impressive event campaign, but falters in the semis 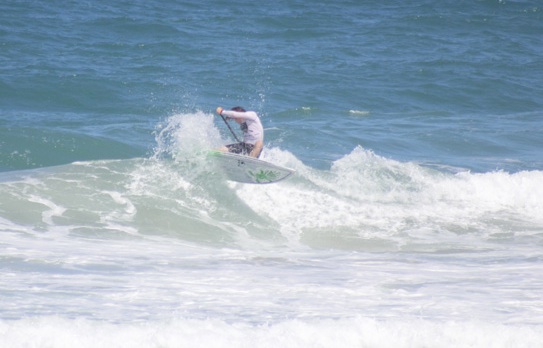 Sean Poynter (Starboard) has been on stellar form this year in Brazil, with a show of precise and radical surfing that got him all the way to the Semi Finals against Caio Vaz (Art in Surf).
In one of the most intense heats of the event, Sean looked as though he had it in the bag with just a minute to go and having priority in the Man on Man format.
However, he let Caio go on a wave under him that didn’t seem like anything too dangerous, but turned into the wave that pushed Caio into the Finals.
A disappointing turn of events for Sean, but nonetheless a great showcase of where his surfing is at and how much of a Title threat he will be in 2014. Despite a slow start for Sean at Sunset, his 3rd place here bolsters him to 7th overall in the World Rankings 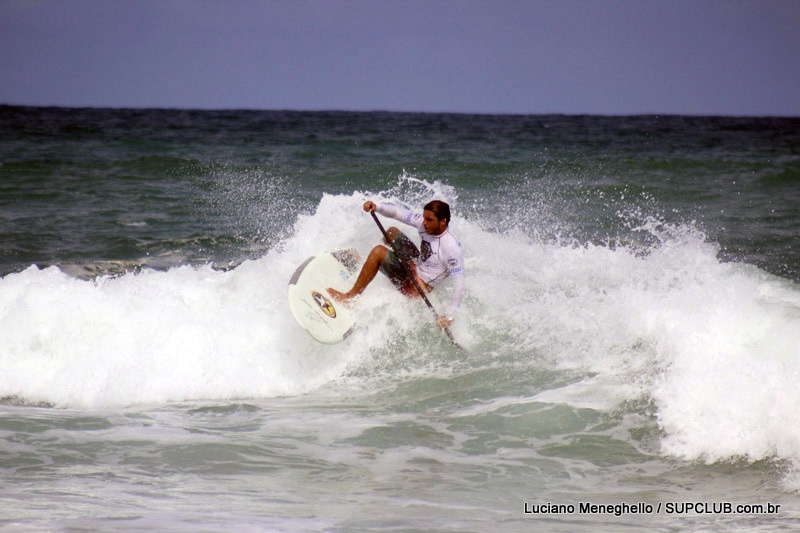 Ian Vaz (Art in Surf) put on a powerful performance throughout the Alagoas Pro Grand Slam, taking down 3x World Champion Kai Lenny (Naish) on his way to the Semis and solidifying the significance of the Vaz brothers in the sport of Stand Up Paddling.
Ian came up against the flying Keahi De Aboitiz (JP Australia) in the semi finals, and despite putting on a solid performance, was unable to topple the Australian who seemed on a mission to make the Finals here in Brazil.
There is no doubt that Ian is a name to watch out for here on the Stand Up World Tour and will continue to be a major threat this year as we see this new wave of talent make their presence felt on Tour. Ian now sits in 4th= overall on the World Rankings after the first 2 stops.

Impressive performances from all quarterfinalists sets the tone for the year 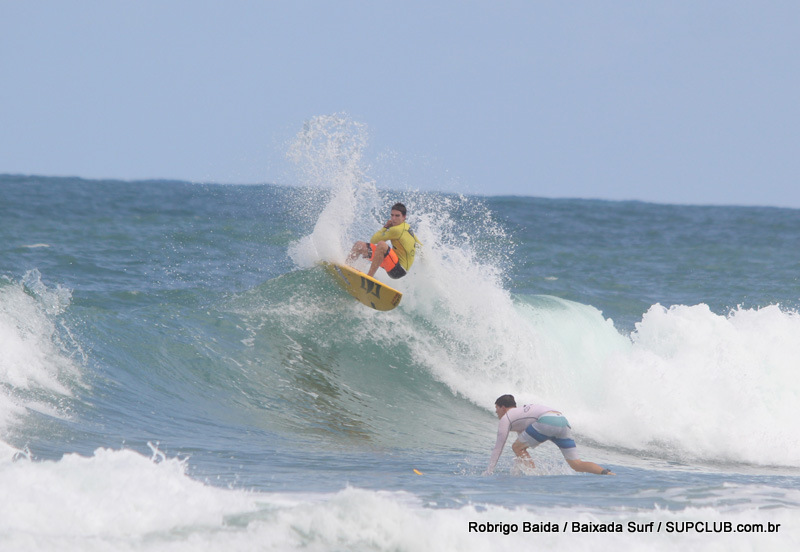 Kody Kerbox (Naish) from Maui was on great form here in Brazil, and narrowly missed out on advancing through to the semi finals, coming up against the eventual winner and Ratings Leader Caio Vaz (Art in Surf).
Leco Salazar (New Advance) also had a great run, with his smooth, flawless style wowing the crowds through the rounds. However, he was unable to overcome Sean Poynter’s (Starboard) run, having to settle for 5th=.
Eric Miyakawa (Art in Surf) is always dangerous at home in Brazil and is somewhat of a dark horse. In the quarters, he once again gave Ian Vaz a run for his money, but was unable to topple Ian’s event campaign.
Giorgiou Gomez (Starboard) had a breakthrough event here in Brazil, really showing what he is capable of. In his quarterfinal heat against Keahi de Aboitiz (JP Australia), Giorgiou went blow for blow with the Australian, getting the crowd to its feet with a mind blowing air reverse and other combinations of radical maneuvers and great surfing. Despite not being enough to advance, Girogiou proved that he is a force to be reckoned with and a name to watch out for on the Stand up World Tour.
A big Mahalo to the Region of Alagoas, Fluir Stand Up, SUP Club Brazil, Art in Surf, New Advance and of course our World Tour Patrons. Now make sure to stay tuned for the first stop on the World Series coming up this weekend here in Praia do Frances.

Ladies round up from Waterman League : 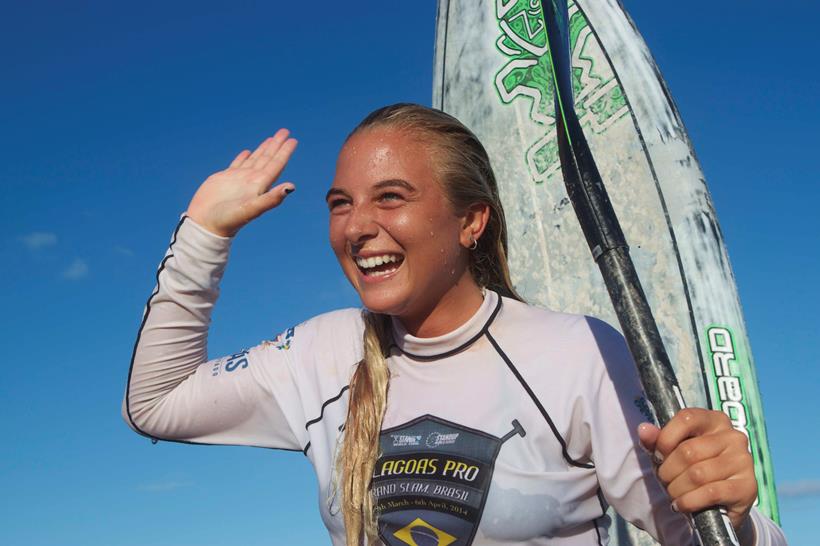 As we saw at the Turtle Bay Women’s Pro back in February, the performance level on the Women’s World Tour has sky rocketed over the past year and new faces are rising to the top to be counted.
Izzy Gomez (Starboard) from Florida has demonstrated that she is not only a force to be reckoned with, but a leading Contender on the Stand Up World Tour by taking the win here at the Alagoas Pro Grand Slam. This is now her 3rd victory on the Stand Up World Tour as she notches up more victories than any other athlete on the women’s Tour, even current World Champion Nicole Pacelli.
Her journey to the Finals was challenging, having to go through the repechage round to make it back into the Main event. However from there, she just gained momentum and then peaked during the Final heat of the day, with some of the best surfing and highest scores of the event going down during the Final agains Nicole.
This in itself is impressive and the fact that she is still only 14 years old is astonishing. There is no doubt that this young Floridian has an incredible future ahead of her. 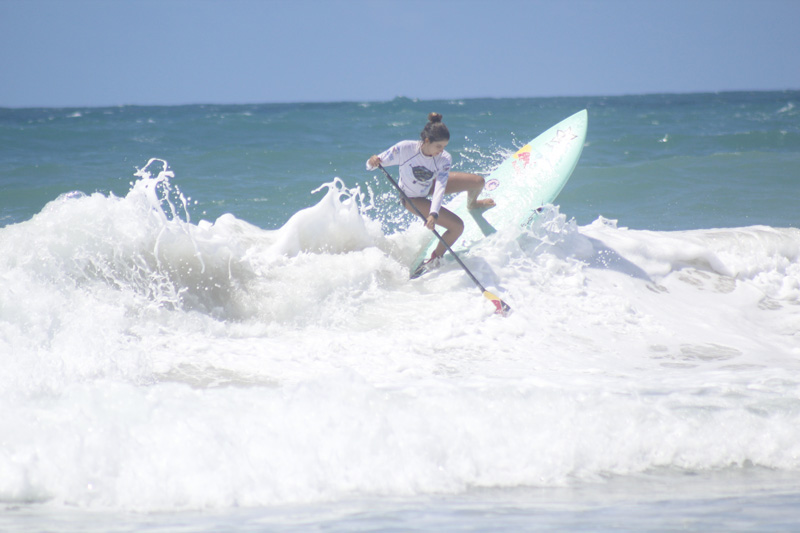 Current World Champion and Ratings leader Nicole Pacelli put on another strong performance here at the Alagoas Pro Grand Slam, powering through the rounds to reach another well deserved Final. Nicole and Izzy Gomez (Starboard) went blow for blow during the Final, both pushing each other to a whole new level, but it was to be Izzy’s day, leaving Nicole having to settle for 2nd place.
However, Nicole is still on top of the world after 2 events, maintaining her ratings lead going into the next event in Abu Dhabi next week.

Iballa Moreno puts on a stellar performance here in Brazil 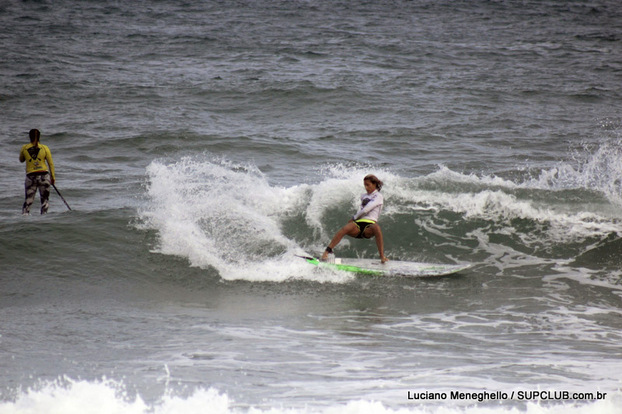 Iballa Moreno (Starboard) from the Canary Islands put together some strong performances through the Alagoas Pro Grand Slam and showed flashes of brilliance that clearly demonstrate she is a real force to be reckoned with on the Stand Up World Tour.
With a more powerful and radical approach to her surfing, Iballa made it through to the semi finals, but just fell short against current World Champion Nicole Pacelli, forcing her to settle for 3rd place in the event.
However this is her best result yet on Tour and is a sign of things to come for Iballa, as she now sits in 6th place overall.

Aline Adisaka strengthens her position on Tour with another strong result 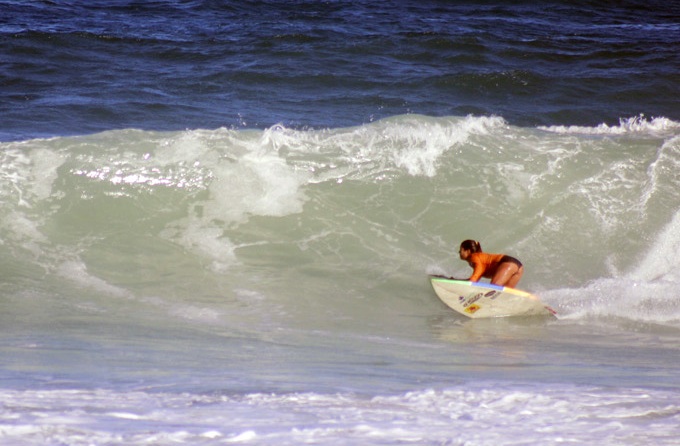 Aline Adisaka (New Advance) put on another stellar performance here at the Alagoas Pro Grand Slam, showcasing that she is a real contender on the Stand Up World Tour and has her sites set on the Title in 2014.
With the Brazilian Title under her belt, she is now heading off to Abu Dhabi with increased confidence after her result here in Brazil and currently sitting in 4th place overall in the Rankings.
Watch out for this Brazilian talent that is making waves here on the Stand up World Tour as we head to Abu Dhabi next week.

Impressive performances from all quarterfinalists showcase depth of talent 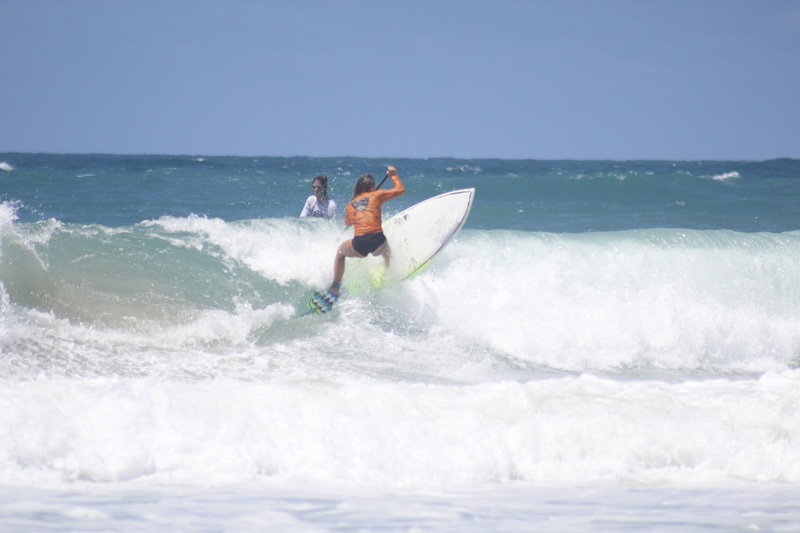 The level of surfing amongst the women this year at the Alagoas Pro Grand Slam was intense, as the gauntlet was thrown and the bar set high.
Newcomer Brissa Malaga from Peru put on a great showing here at Praia do Frances, as did 3rd place finisher at Sunset, Sophia Bartlow from California.
Meanwhile Candice Appleby demonstrated that she has her targets set on the World Title, looking strong through the rounds, but just falling short against the eventual winner, Izzy Gomez (Starboard). Maina Thompson was our other Brazilian Maina Thompson stepped up to be counted, reaching the Quarterfinals of the World Tour event and finishing in 3rd in the Nationals.