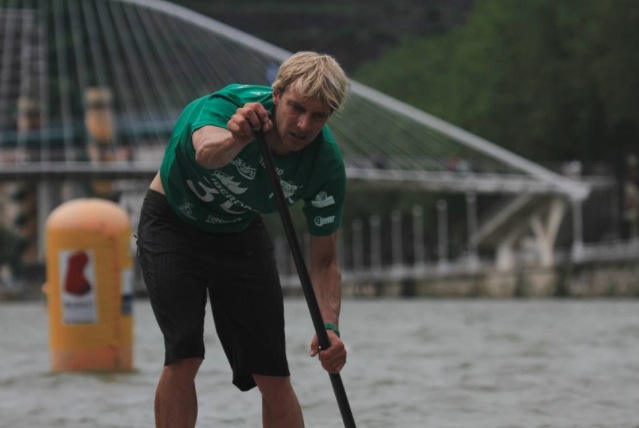 This year saw separate events to crown the 2013 National Champions in SUP Surfing and SUP Racing. The events also formed part of the selection for the 2014 ISA Paddle Board Worlds which will be held in Nicaragua. SUPboarder caught up with the 2013 Champions to quiz them on their victories earlier this month. Last week we spoke to the Wave Champions, this week we catch up with the Race Champions crowned at the 2013 BSUPA National Race Championships in Kingsbridge.

I’m very proud to say I’ve achieved something I’ve put a lot of hard work into this past year.

It’s been a long season as I was training hard throughout last winter to get ready for the ISA World Champs and when I returned home I started getting ready for some European races. This past month I’ve felt flat during training and was looking forward to having a break. Having this one important race at the end of the season was tough. I always feel pretty confident if I’ve done the hard work beforehand but I was under the weather on the day of the race so things were pretty close.

I’m having a little rest to hopefully go snowboarding or a surf trip before my wife has a baby in the new year. The next goal for me is the ISA World Champs early next year and then the Battle of the Paddle, California in September!

It’s a great sense of achievement and the UK SUP crowd are a friendly bunch!

I would really like to thank, Tara and Richard at Surftech (Surf Commission), Adam at ZRE Paddles, Tid’s at Tadsurf and Dave at Greensticksurf.

It feels good thanks!  2013 has been a really great year of SUP racing for me, both in the UK and Overseas. Winning in Kingsbridge, on my home shores and with the support of a local crowd is the perfect finale to my UK racing season. I am also excited to have won yet another opportunity to be part of the GB team again for the 2014 ISA Worlds.

On competition day, I felt a little more nervous than usual. I think it was the added pressure of wanting to perform well in front of a home crowd. I also wasn’t feeling 100% well on race day and wasn’t confident that I’d be able to maintain my usual race pace needed to clinch the race victory.  To combat my nerves I reminded myself that I am so far, undefeated in a UK SUP race! My Starboard UK team-mate Lindsay Frost was my biggest threat and has shown consistently strong performances this year in the 12.6 class.  I knew over this relatively short 5k course that there was no room for error or complacency off the start-line. Once the start gun had fired, I was at last able to channel my excess nervous energy in to paddling as hard as I could to ensure I took the lead at the first mark. I took full advantage of the moderate tail wind and worked every small bump on this downwind leg to open up a gap to the next turning buoy at Bowcombe bridge. It was only once I had rounded the buoy and was heading back upwind on the return leg, that I could see I had opened up a good lead on Lindsey as she approached the buoy turn in 2nd place. For the remainder the race I kept my head down, working hard to maintain my pace and lead. It was too early to relax but I now felt confident knowing that unless disaster struck I had pretty much nailed it!  Very soon after rounding the last mark the race was over. There was a very welcoming cheer from the Crabshell Inn as I crossed the finish line in first position. Stoked!

3) What’s your next goal in Competition SUPing?

In December I shall be competing for the 2nd consecutive year in the Paris Crossing, a 12km race through the center of Paris. Next year I hope to build on this year’s results in the Standup World Series and California Battle of the Paddle.  My main focus over the winter months will be training for and working towards raising sponsorship and to help funds towards getting me to the ISA Worlds in Nicaragua next May. Hopefully some warm winter training in preparation for the World’s will be on the cards too!

Without doubt winning the SUP 11cities Tour race in Holland last month has been my biggest SUP achievement so far (220km SUP race over 5 consecutive days). I was delighted to have completed the distance, let alone finish up as the overall female champion!

Taking part in SUP competitions pushes you physically and mentally, far more so than just free paddling. It’s the perfect time to challenge yourself in conditions that are out of your comfort zone and will accelerate your learning big time! You’ll be surprised how quickly your paddle fitness, SUP skills & confidence can improve after just a few competitions.

Time on the water is essential! Experience as many different paddling conditions as you can. Each time you go for a paddle set yourself a new challenge, ideally slightly beyond your initial comfort zone………Above all believe in yourself …… before you can say ‘Supboardermag’ you’ll be National Champ!

7) Who are Your Sponsors

It feels fantastic to be crowned to gain a national title again and it makes it more special because it’s getting harder every year as the standard of competitors is now of true international standard. So I’m pleased just to be on the podium let alone walk away with the title.

Turning up  up for the weekend was a big decision. I was very ill just before ‘the 11 cities’ which totally wiped me out. I lost 4-5 kg, lost all my strength and power, so I wasn’t at 100%. I wanted to win but wasn’t sure of my form and most of the other guys were going into the the race in form.  I had a lot of nerves before the race but had to try and focus on the process of paddle and not think about the result.

I also was disappointed with our paddle organisation making a world qualification event on flat water when the ISA World Championships is on the ocean and through heavy surf and the decision based on this 1 race. But I wanted to come along and support the organisation and hope they change things for the 2014 season. However the race was well organised and everyone new where and what they needed to do.

The start was quick and Paul Simmons was pushing right to the turn buoy, but managed to sneak the inside line and come out ahead.  Paul (Starboard UK) and Damo (Team NSP) where sat on me and nothing I did got them out of my draft, so I just kept surging picking up the tempo and dropping off and luckily by the 4th km I had stretched the elastic band to breaking point and both Paul and Damo slipped off the back and I was able to paddle the 1km relatively easy, focusing on my stoke length and taking the win.

Next goals and comps are hopefully the La Torche Pro at the end of October and the Paris Crossing on the 8th Dec.  I’m in it for the long run as in many different ocean sports.

My biggest achievement so far is gaining a 2nd in the 11 Cities Tour Holland, and 3rd in the SUP Cup France.

It’s a great experience. The best thing is that there are no ego’s and everyone talks to everyone. Everyone has their own race within a race, no matter whether you’re an elite paddler or age group paddler. Everyone competes at their own ability. Don’t get me wrong, there are no friends on the water! But when we’re off its the paddling Ohana again.

Enjoy what you’re doing. Train hard, race hard but have fun every time. And make sure that you get involved with the ocean in any way… whether it’s SUP, outrigger canoe, ski or prone paddling… go out and enjoy the water.

This year Louis Harrow from Kingsbridge was crowned SUP Surfing Champion and SUP racing Champion in the Junior category. An impressive performance against a very competitive Junior entry. In case you missed it last week, here’s a re-run of Louis’s interview…. one very stoked young man!

It hasn’t really sunk in yet. Podiums are fun but its all about the love of surf that I think of every day!

If I am honest, most of my time in the waves is on my short board not my stand up. I have surfed almost every day since Easter and trained hard. My short board surfing has helped me develop a good riding style for stand up and with the addition of the paddle makes an exhilarating experience particularly in small waves where short board riding is almost impossible

Goals for the next 12 months are to carry on training in the waves. Starboard have kindly agreed to send me a 7.1 Pro brushed carbon. For my size the board I have been using has been too big. I have been given a slot in the junior event in La Torche (part of the Stand Up World Tour). I just have to persuade Dad to take me!!! It would be good to see how I compare to more juniors. I would also like to compete in the race there! We need more juniors competing and I know my Dad is trying to get more juniors going through BSUPA

I managed a 3rd place last year at Watergate!

Competition is fun! Its not just for the elite! The vibe at Watergate Bay and Kingsbridge was so cool! Its a young sport but with too many oldies grabbing all the attention. I guess its expensive to buy your first board!

Starboard, Waterborn and The Bantham Surfing Academy who train me. Also my Dad who sponsors me by paying for petrol and hotels and food and kit!