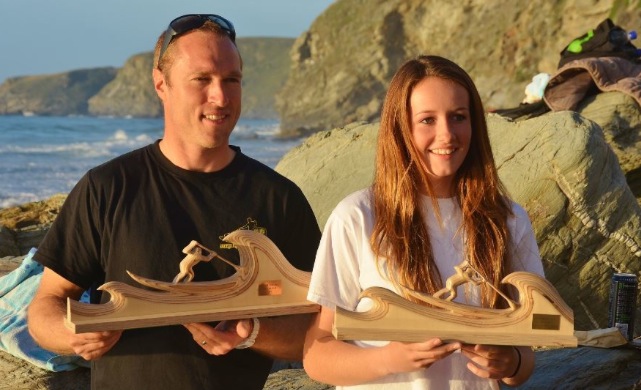 This year saw separate events to crown the 2013 National Champions in SUP Surfing and SUP Racing.  The events also form part of the selection for the 2014 ISA Paddle Board Worlds which will be held in Nicaragua.  SUPboarder caught up with the 2013 Champions to quiz them on their victories earlier this month.  This week we catch up with the Wave Champions crowned at the 2013 Watergate Bay BSUPA SUP Surfing Nationals.

It feels so good to have won. I was so surprised though, but so happy having exceeded my expectations.

In the women’s side of the event, there was a semi-final then a final. Having been put against the other women I managed to win my first heat, which i didn’t expect, but happy to have done well in. Having not done so well in previous events, I was aware of how well Marie and Abi had done in the competition. I was determined to place in the women’s this year. On the Sunday of the event, our final was one of the first heats to go out on the water. Myself, Marie, Abi and Jo had hard conditions, with small waves and an offshore wind. In the final it was hard, and after the heat no one knew the placings, and we had to wait until prize giving that afternoon. I was so surprised to have won and it came as a complete shock, but i was so so happy as I had placed much better than I had thought I had.

The next competition I’m aiming for is in Nicaragua, South America for the Worlds in 2014. I have become part of the GB team after I won.  For my preparation for the competition I will most likely be going down to Cornwall to chase the surf.

I have been Junior Girls champion for surf in previous years.

It’s so much fun and a great weekend. You get to meet new people and improve your paddle surfing.

Just keep paddling and enjoy it.

It feels really good. Riding boards with my own name on and working with Roger Cooper meant I had something to prove to myself.  I’ve never thought I would win, but this year I put my past performances behind me and concentrated on what I knew I could do .

The weekend went by in a flash. My collision in the first heat of the competition with Tom Lowe which damaged my board just spurred me on even more. It actually gave me time to focus on what I had to do apart from tape my board up! Working my way back through the heats against big hitters such as Andre, Aaron, Alex, Glyn, Gareth, Jim and Neil.  I enjoyed the banter with the SUP community as usual, but I had more drive mentally and tried to relax my body after each heat.

We may have a Welsh ‘WSF’ SUP competition coming up, so I’d like to enter and put myself back on the competition circuit. I am going to train as much as I can for the World Championships in and out of the water. I also have 2 weeks booked in Bali before Christmas, as well as looking into some new board shapes to suit Nicaragua waves.

In competition my biggest achievement before the 2013 Nationals would be winning series 3 of The BSUPA Wave Championships in 2010. I would have to say coming a close second, are the ‘Barker Paddlesurf’ boards which are becoming really popular.

It’s a great atmosphere… the people, the boards and the all consuming aspect of Stand Up Paddling! Some of the Gower’s SUP club members came down this year to support and they really enjoyed the spirit of the competition and have vowed to enter next year. I really hope the ladies side of SUP surf competition grows. Its actually really fun surfing in a heat, you just need to relax and try and catch the good waves, which means observing the waves 5 minutes before your heat.

Any surfer can get disappointed with the changing conditions in a competition. Remember you are scored on your best 2 waves  – so all you need to do is CATCH TWO GOOD WAVES… simple!

This year Louis Harrow from Kingsbridge was crowned SUP Surfing Champion and SUP racing Champion in the Junior category.  An impressive performance against a very competitive Junior entry….

It hasn’t really sunk in yet.  Podiums are fun but its all about the love of surf that I think of every day!

If I am honest, most of my time in the waves is on my short board not my stand up!  I have surfed almost every day since Easter and trained hard.  My short board surfing has helped me develop a good riding style for stand up and with the addition of the paddle makes an exhilarating experience particularly in small waves where short board riding is almost impossible.

3) Whats your next goal in Competition SUPing?

Goals for the next 12 months are to carry on training in the waves.  Starboard have kindly agreed to send me a 7.1 Pro brushed carbon.  For my size the board I have been using has been too big.  I have been given a slot in the Junior event in La Torche (part of the Stand Up World Tour).  I just have to persuade Dad to take me!!!  It would be good to see how I compare to more juniors.  I would also like to compete in the race there!  We need more juniors competing and I know my Dad is trying to get more juniors going through BSUPA.

I managed a 3rd place last year at Watergate!

Competition is fun!  Its not just for the elite!  The vibe at Watergate Bay and Kingsbridge was so cool!  Its a young sport but with too many oldies grabbing all the attention.  I guess its expensive to buy your first board!

Starboard, Waterborn and The Bantham Surfing Academy who train me.  Also my Dad who sponsors me by paying for petrol and hotels and food and kit!