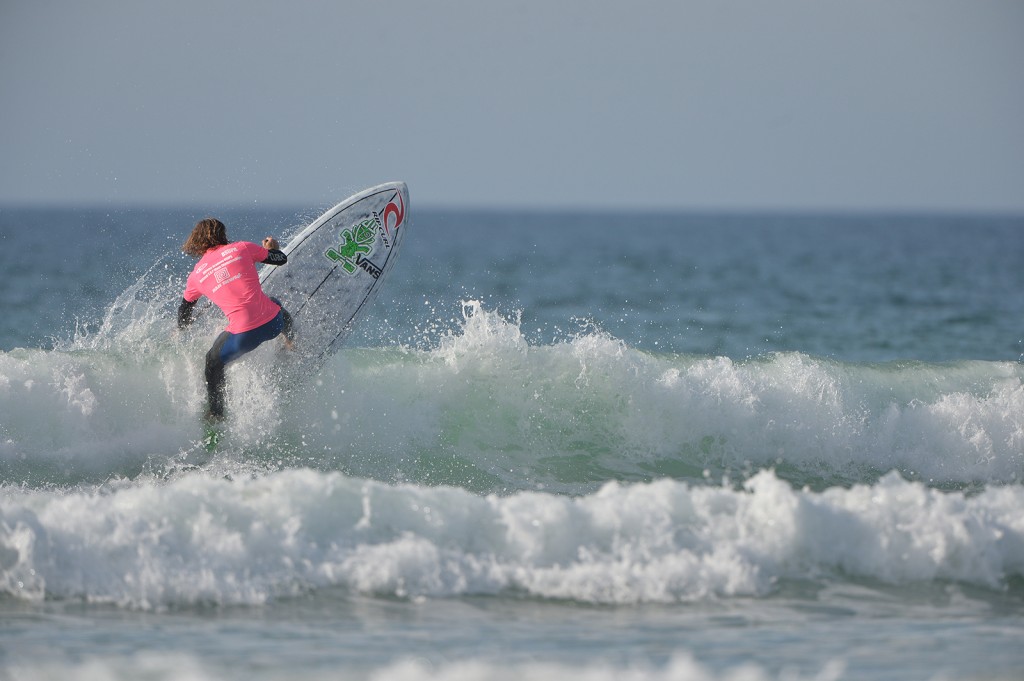 Event write up and results from Simon Bassett, BSUPA.

When you publish the dates of an event ahead of the surf report it’s always going to make life interesting to run a paddlesurf surf contest. Watergate Bay has rarely let BSUPA down over the years – this  year the the surf forecast for the British Stand Up Association event was sandwiched between two decent surf forecasts and at one point it looked like it wasn’t going to happen.

But on Saturday morning under the clouds, the sun appeared, the music blared, the wind dropped and the surf started to pulse in. 53 competitors were signed up –40 men, 9 Women, 4 under 16 boys and 2 under 16 girls competing in the open women’s division. Event director Rich Marsh and the ISA judging team set the briefing off and explained the judging criteria. Each heat would be 20 minutes with a 12 wave max, top two to count and would be scored on use of paddle, wave selection, radical moves in the critical section and speed control and flow on the wave.

As the first heats started to roll through, it was clear from the start the surfing standard is getting more radical with the top 15 riders beginning to stretch out what can be done on a SUP in surf. Although the surf was not big, riders were generating stacks of board speed, and plenty of carving bottom and top turns. Board choice was short, with plenty of customs from 7.4 to 8.5 and only a few riders opting for longer boards. A lot of heats went on so I didn’t see them all but here is the summary of the final heats.

The men’s final saw a very tough heat with 20 minutes of hard charging in the best surf of the day. Tom Lowe who had literally just got on his new Starboard was tearing into every section and working the most out the conditions. Aaron Rowe certainly was ripping his top turn hacks and all round riding ability is amazing – in the free surfing session after the comp had finished he was pulling off sick aerials on his Charlie Grey custom. Glynn Ovens another Welsh contender riding Fanatic was making the most of the small surf and pushed every section he could with a smooth style of riding. Matt Barker Smith using one of his own Barker custom creations was riding a super flat rocker board and attacked every wave that came his way. He had a slightly different strategy and worked left and right sections and pushed very hard on every wave that came his way. I watched the final. Have to say it was tense, very close and from the beach it was hard to pick the winner. The highest individual wave score of the competition was Tom Rowe in his quarter final round who scored a 9, 9.5 and 10 from the judges. In the 0pen men’s final there was only a point difference of 1.5 separating 1st place from 4th place!

The BSUPA Watergate event is not just about the competition. Its a time to catch and shoot the breeze with like minded SUP friends – I have to say we had a great evening in the Phoenix drinking a few beers playing pool and listening to the ripping band Grizzly and Grasshoppers. The whole weekend was about the Watergate beach life… enjoying the surf and for some just mooching on the beach.

Here’s what Matt Barker Smith thought about the event:

“Any surfer can get disappointed with the changing conditions, but it was small waves which first lit the flame for my affair with paddle surfing, working the board and paddle. How does it feel? – I wanted it! Riding a board with your own name on means you have something to prove I guess. In the past I’ve always deliberated which board to use in the changing conditions and enjoyed using each one. But as SUP surfing is now pushing the boundaries, its about sticking to a board which does everything and a board you can trust.
The weekend went by in a flash. My collision in my first heat with Tom Lowe which damaged my board just spurred me on even more. Having seen last years SUP surfing GB team Andre le Geyt and Jim Richardson surfing in hard battles in the world championships in Peru, this has inspired me to push harder and delve into what works with my equipment and my focus. Aaron was extraordinary as he has been known to be, and a great athlete. Paddlesurfing is growing quickly and the standard is being raised every year. To have two new competitors into the BSUPA annual comp and both reach the final, Glyn Ovens and Tom Lowe are testament to the waterman ethos SUP reaches out to, no matter what background. I’m sure surfers who have been secretly working on their paddlesurfing will keep us on all our toes in years to come. Thanks to Richard Marsh for organising the action! See you next year “

The women’s final was short on the waves but not on determination and skill – the 4 ladies fought it out with certainly no one holding back. The sets were patchy and moved all over the comp zone. Marie Buchanan swapped starboard boards during the heat to get more drive. Abi Barker Smith was going for every right that came through using one of Matt’s new designs. Holly Bassett was trying to find her own peak but as the heat went on she had to move into the pack to catch the only waves that came through during the day. One decent wave would clinch the final. It was very close between the top three – but Holly using her fanatic 8.5 sealed the deal with a great go for it attitude and making the best of each wave.

In the junior final heat it was clear the standard here has really picked up. There was no straight lining going on – the kids were ripping. It was an impressive sight seeing these guys attack the waves and really thinking about their position on the waves and making decent turns on the critical sections. Guy Bridges, part the famous Bridge kite surf family, Louis Harrow the youngest at 10 years old, Ollie Laddiman and Fin Gamblins all rode hard through the 20 minute heat. But it was Louis Harrow who took the lead and deservedly won the final.

BSUPA would like to thank the Extreme Academy & Watergate Bay Hotel, the RNLI who’s lifeguards provided water safety management across the weekend, all the judging and beach support staff, Bob Berry and Rob Jewel for capturing the spirit of the competition and the social side to the weekend, Grizzly and the Grasshoppers and The Phoenix for music and a great Saturday evening, and all competitors and their friends and families for their continued support with the growth and development of not only these championship but of BSUPA.