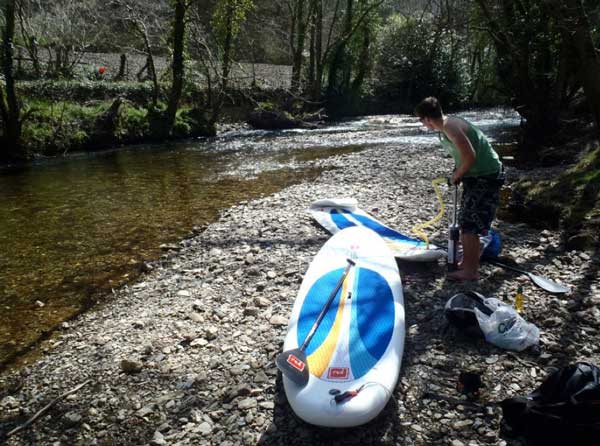 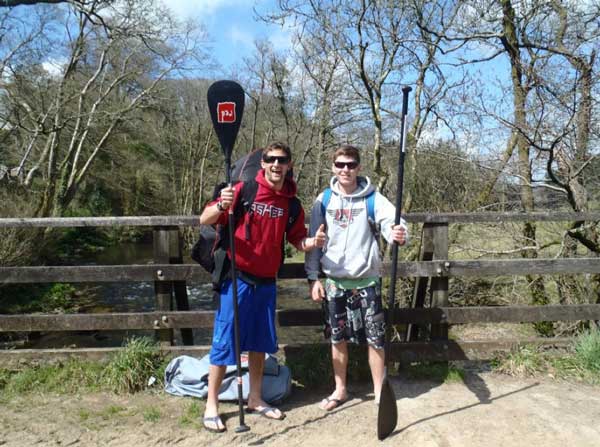 A stand up paddle board is the perfect way to get exploring. And an iSUP is the perfect way to have an adventure. Carrying your board in a backpack and starting your SUP adventure on foot opens up endless opportunities. The hardest decision is often deciding what to do! George and Ric two mates from South East Cornwall recently decided on a River Fowey iSUP adventure. Keep reading to find out what they got up to!

Ever since moving to Polkerris to establish a watersports centre the idea to paddle down the River Fowey has grown into an unachievable, impossible dream! My original plan was to attempt the journey in an inflatable, blow up boat and then; BOOM, Red Paddle Co burst into the spotlight. At last a craft which could cope with the demands of the journey from a forest hike, white water, tidal flows and…pubs. Okay that last one could be done with armbands on simply floating down the river; but the rest, there isn’t anything else out there! The only problem was finding the right day-off (rare in this business) with the right forecast and tide.

Eventually the day came…. After a short hike down a steep-sided valley surrounded by pine trees, Ric and I stumbled across the river we had been searching for. The issue was the river in question gently meandered through golf course. This in itself wasn’t an issue the problem occurred as I silently pump the boards to the correct pressure whilst ensuring no wannabe pro golfers were interrupted during their shots. As I pulled the pump hose off my board, the valve (unbeknown to me) had been locked down, cue; a noise of similar calibre to a blue whale blowing air through its blowhole;

PPPSSSSHHHHHHHTTTTT!!!! I think it’s fair to say all stealth and courtesy towards the golfers was now completely off the cards as we hot footed out of there waving our apologies as the fast flowing river sucked us ocean bound.

We soon found that river cruising doesn’t include as much ‘cruising’ as you may think, requiring permanent concentration ahead to ensure you take the correct route and avoid obstacles. As the trip got well under way we soon found our first major obstacle; a fallen tree. Seeing me struggle, roll, wriggle and force my way under the trees thick branches Ric soon came up with a better plan. Instead, he jumped onto the largest branch, climbing over the bulk of the branches with the plan to drop back onto the board on the other side unscathed. What’s more, it worked like a dream! As he took his first stoke he suddenly became aware of his leash which by now was becoming tight and was busily trying to pull the tree downstream with him. He had successfully tied himself to the tree which wasn’t going anywhere in a hurry. With the current against him and no paddle (he dropped it) he was left hanging from a branch trying desperately to follow the route he had just taken over the entangled branches as the board slowly drifted from under him in the current. I spent the next 5 minutes on my knees crying and hurting with laughter as Ric sent high pitched screams skyward!

As time went by we were soon out of the smaller, meandering stream and into tidal, large scale estuary paddling. We had, amazingly, timed it perfectly with the outgoing tide hoping that we could occasionally take our time to sit back and watch as the world slowly floated by around us – WRONG! Unfortunately we hadn’t taken into account an 8knot headwind. As windsurfers we thought 8knots is nothing, let me tell you, it’s most certainly not. Paddling soon came close to impossible in certain areas as the wind squeezed, funnelled and generally forced its way up the river creating white caps and different conditions around every bend. Undeterred we simply filled the extra time chatting and commenting on the passing countryside, boats and other heavy, worldly issues.

After a quick stop for some lunch with a view across the now flourishing estuary we watched as a small boat progressed downstream, in our general direction. As it came close it very unfortunately hit a mud bank and came to a grinding halt. The captain of this small vessel did what any other man would do in that situation; carry on regardless. Rather than assess the situation he spent the remainder of our lunch stop spinning in circles on the spot with the engine on full throttle; so much for good ol’ peace and quiet!
Deciding we had suitably refuelled we hopped on our boards and carried on with our great voyage. By now, defeating all odds, the boat had spun itself to the edge of the mud bank and was back into clearer water unfortunately for us it’s four horse power engine to weight ratio was the equivalent to the power we could lay down with our paddles meaning the three of us raced southwards to the background symphony of ‘RRRRRrrrrrEEEEEeeeeeeEEEE’ as the engine willed itself to keep going.

Eventually Ric and I came to a joint decision that the great outdoors was just too noisy for us both and that we should stop at a waterside pub, aptly named the Fishermans Arms (its wonder how he fished without them) to let the little, annoying boat carry on without us. By now we were getting agonisingly close to our final destination of Fowey. As we sat basking in the sun, pint in hand, happy for the break from the continuous head wind, Ric blurted “Imagine if when we get to Fowey there is a pod of dolphins waiting to swim the last bit with us – that would be EPIC!” to which I replied “Don’t be an idiot this isn’t the Caribbean mate!” sparking a debate of equally impossible situations for our arrival.

The final stage of the journey was littered with old skeletons of giant structures left as haunting reminders of the bustling china clay industry, the days of old and also an old noose hanging from one of the bridges which we very quickly decided not to look at it in too much detail.
On rounding our last bend we drank in the view as Fowey rose from the water edge standing proud above us offering a very different angle to the usual shore bound observations. As we finished our last few hundred metres I suddenly stopped, fully alert. “What is it” Ric asked, “I’m not being funny, but I’m fairly sure I just saw a dolphin!!!” I responded.

Instead of finishing those last few strokes we headed to a huge, commercial mooring buoy to watch for any further signs of the dolphin. After a few minutes of tenuous searching I was starting to doubt myself when suddenly out of the blue (quite literally) a dolphin resurfaced within a metre of our boards and continued to swim its circular route around the pontoons and buoys before passing us again and again and again!  Maybe it is the Caribbean afterall?!
In total shock and amazement we headed to the slipway with a grin from ear to ear!

All that was left was to roll up the boards, sling them on our backs and head to the van which we cunningly left in Fowey the evening before.

An incredible adventure, this is what paddle boarding is all about! – George Shillito

So get your mate and your iSUP and get exploring! What you can do and where you can go with a paddleboard is endless.