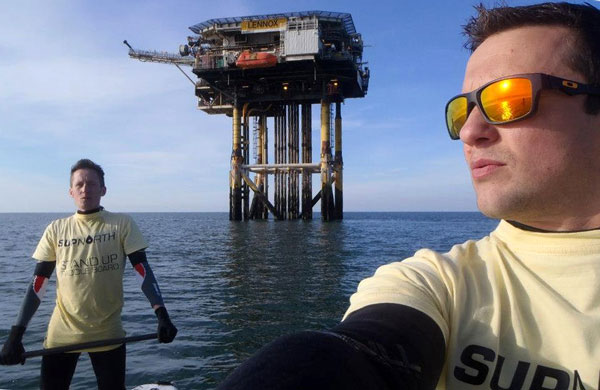 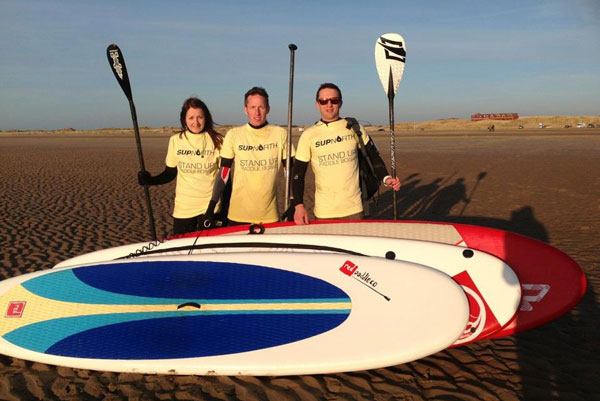 All great adventures start with an idea (and that’s more often than not, with mates at the pub!) Its the thinking, planing and then doing bit which is what turns those great ideas into an adventure. And the SUP North Team definitely do a lot of that. They are always out paddling, and not only talking about various SUP adventures but doing them too! Their latest mission was to paddle around an off shore rig 5 miles out to sea, which they’d been looking at out on the horizon for a while.

SUP North Team is made up of Alan, Simon and Lucy from Southport. Until recently we were bravely paddling in the frozen North West in isolation like a remote jungle tribe, but were totally inspired by taking part in Central SUP’s Midlands 5ive Race Series and meeting loads of like-minded SUP boarders. From various backgrounds in kite-surfing, land-boarding, snowboarding, breaking a hip skate-boarding and not liking the idea of getting dragged through the water head-first, we have each developed a passion for SUP boarding, in all its forms, that we want to share at every opportunity. With a few coastal trips under our belts we are working up to bigger and better things, and making plans to help to build the sport and get more people on the water.

The team from SUP North ticked off a big adventure this weekend when we paddled out for a closer look at the Lennox platform in the Irish Sea off Southport. Over the winter we have completed a few trips, including Simon and Alan taking on a 14 mile paddle from the Wirral to our home beach of Ainsdale, crossing the shipping lane out of Liverpool. The Lennox trip has been brewing for a couple of months and Saturday was the first day in weeks with suitable conditions for getting out on the sea, instead of our more regular lake training. 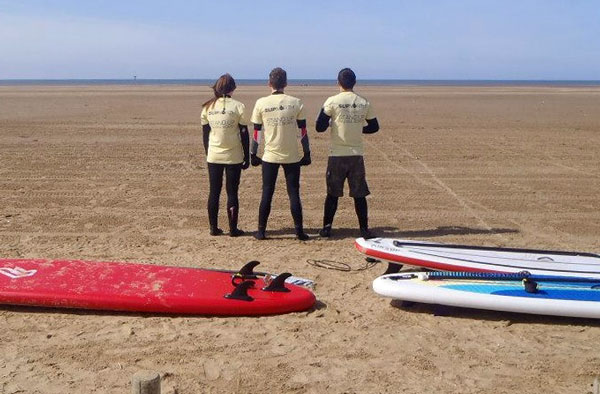 When we arrived at Ainsdale the wind was, as forecast, light and on shore – but it was bitterly cold!

By the time we were changed and ready to set off it had really picked up and felt even colder, but an on-shore wind meant that if we didn’t make it all the way, we would at least have some assistance on the way back, so we set off, with Alan’s Dad keeping an eye on our progress from the beach.

The outward journey was tough going, with the head-wind and plenty of chop. Although, while cold feet have sometimes been a problem through the winter, the sea felt strangely warm for the time of year, helped by the unusual appearance of the sun!

The guys took a few breaks, having a rest using both boards as a raft, but as I’m a bit slower I was always playing catch-up so paddled on. The rig didn’t seem to be getting closer, but we could see our progress by watching the wind turbines off Liverpool pass by, as well as tracking our position with GPS.

The wind must have dropped a little as we made it and were dwarfed by the massive platform. We didn’t get too close, but the sea birds that make it their home flew off as we approached and we could hear the hum of the rig. It’s huge, despite the fact that it’s un-manned with no accommodation – made that way to be less obtrusive from the shore apparently. By this time the tide was rising and staying still for a photo was almost impossible. It had taken us two and a half hours to paddle the five miles out – no speed records were broken in the completion of this challenge!

A quick ‘board meeting’ and a snack fueled the return leg. The now light wind was less help than we had hoped and the Southport landmarks looked tiny as we started back towards the beach, but I think a return journey is like dessert after a big dinner – you always find extra capacity for something a bit different!

Our only disappointment was that we hadn’t seen any more wildlife than Cormorants, Oyster Catchers, Gulls and the odd Shelduck. But, as we approached the beach and our welcoming committee, we spotted a shiny black object in the water – a seal! We’ve been keeping our eyes out for them for months now, having had a few glimpses late last year, and it really rounded off a brilliant day. We couldn’t believe he was so close to the shore and it’s worth noting that he only appeared when Alan was singing.

The total distance paddled was 10 miles, including a circuit around the rig to get a good view and a few photos. Somehow for me, the fact that we were within sight of the shore and near an object that we can see from land made it feel less radical than it was in hindsight, but we’re all pretty pleased with the achievement and it was great training for the upcoming races in Snowdonia and on the River Dart. It’s true to say we were exhausted – even opening the door of the fish and chip shop was difficult!

SUP North are super passionate about Stand Up Paddleboarding and with a school and on-line shop in the pipeline, they now have a focus for their SUP adventures and exploits. They are working with the UK stand up paddleboard community to spread the word and introduce more people to the great sport of SUP. For more information about SUP North, contact the team at supnorthuk@gmail.com