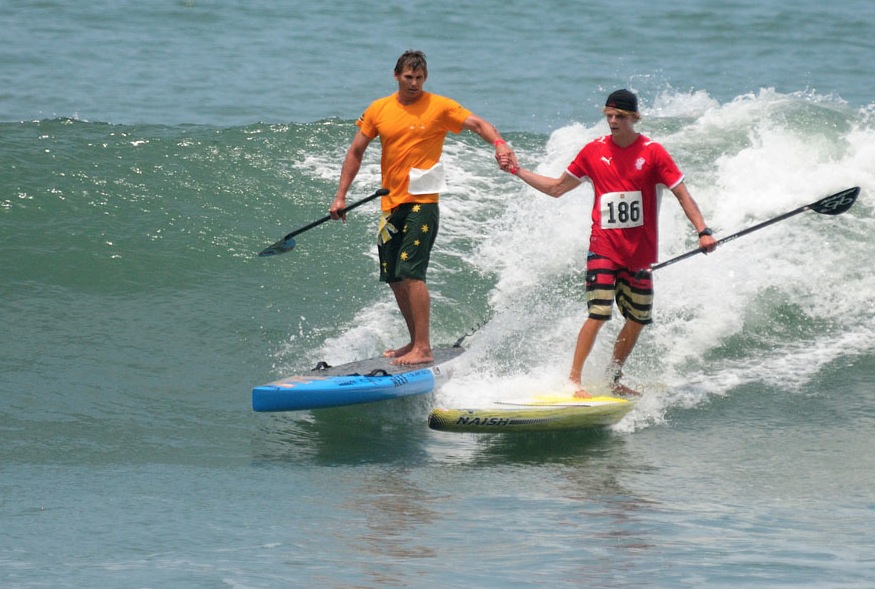 On the Final Day of the ISA World Championships in Peru. Team GB and Team Ireland took part in the men and women’s Technical SUP Race Final. Marie Buchanan (GBR) did amazingly well, battling throughout the race in 4th,5th,6th place and finishing an impressive 6th, unfortunately just out of the medals. Ollie Shilston (GBR) Charlie Grey (GBR) and Paul Byrne (IRL) had tough competition in the mens event, finishing in the middle of the pack. We’re still awaiting the confirmed results for the post medal positions, but again they should all be proud of their performance and getting into the Finals.
What an amazing event for both Teams. The level of SUPing all over the world is getting higher every year and Team GB and Team Ireland have proved this too with their improved overall team positions from last year. Team GB finished 9th, and Team Ireland 18th out of 23 countries (see the ISA press release below for the full results)
We are already looking forward to next years event. Well done to all the Teams and thanks to the ISA for putting on a great world event and allowing us all to be part of it and follow it live from the UK. 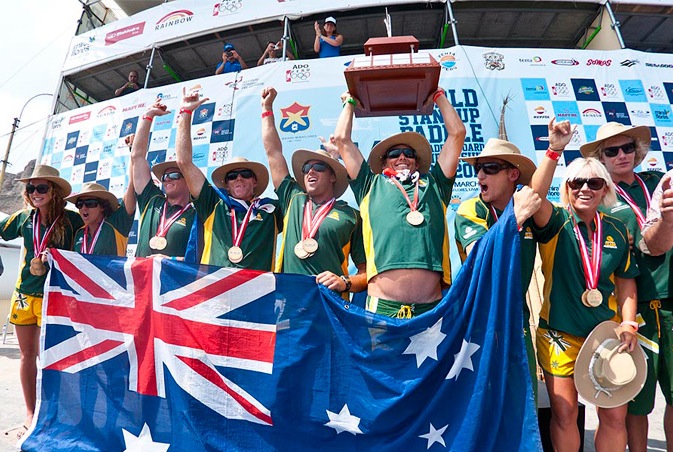 Team Australia dominated at the 2013 ISA SUP and Paddleboard Championship winning the overall Team Gold Medal at Club Waikiki-Peru Trophy for the second year in a row. Photo: ISA/Gonzales

The Australian National SUP and Paddlebord Team achieved 9 out of the 12 possible Gold Medals awarding them the overall Team Gold Medal and the Club Waikiki-Peru Team Trophy for the second consecutive year.

Once again, the final day was greeted with beautiful weather and surf conditions for crowning the rest of the champions. Nicole Pacelli from Brazil won the day’s first Gold Medal in Women’s SUP Surfing. The following heat was the Men’s SUP Surfing Final that 22 year old Sean Poynter (USA) won. Later in the day, the SUP Technical Race Finals took place and Australia’s Angie Jackson and Denmark’s Casper Steinfath won the Gold Medals. The last event of the day was the Team Relay, which Australia won.

“Thank you all for making the 2013 ISA SUP and Paddleboard World Championship the best SUP and Paddleboard event in history,” said ISA President Fernando Aguerre. “With a record amount of athletes from a record 23 countries, this event is certainly the most diverse SUP and Paddleboard event in history. “
Aguerre continued, “We had teams from all continents in the world, with all their diversity. They proved to the world that SUP and Paddleboard are universal sports that appeal to both genders, to all ages, and to people of diverse ethnic, religious, national and socio-economical groups. In closing, I would like to thank our friends from Peru, Karin Sierralta, VP of the ISA and organizer of the event, and our friends from IPD (Peruvian Institute of Sports) and its president, Francisco Boza, the Peruvian Olympic Committee (COP) and its president Jose Quiñones, and ADO, the Olympians Peruvian Association, and of course, the legendary Club Waikiki and FENTA, the Peruvian Surfing Federation.”

The Final Day started with the Women’s SUP Surfing where the Brazilian Nicole Pacelli (13.17) achieved the Gold Medal after defeating the Australian Shakira Westdrop (AUS, 12.6), Iballa Ruano (SPA, 10.6) and Caroline Angibaud (FRA, 7.14).
The Aussie, Westdrop, had a great start to the final, and was ahead of the other competitors, but Pacelli found a good wave that awarded her 8.17 points on the last wave of the Final, that made her jump from the last place to the first and taking the Gold Medal and the Hector Velarde E. Women’s SUP Surfing Perpetual Trophy, named in honor of Peru’s legendary surfer and patron of the sport.

2012’s SUP Surfing Gold Medalist Antoine Delpero fought hard to pass Poynter earning an 8.23 in the last minutes of the heat, but it wasn’t enough to overtake Poynter and defend his Championship. Tamil Martino (PER, 14.00) got the Silver Medal, Delpero (FRA, 13.8) the Bronze and Beau Nixon (AUS, 13.00) the Copper.

In the Women’s Technical Paddleboard Race, Angela Jackson won her second Gold Medal of the event defeating Olivia Piana (FRA) with the Silver Medal, Barbara Brasil (BRA) finished with the Bronze Medal, and Laura Quetglas (SPA) with the Copper Medal.

The Final of the Men’s SUP Technical race showed an amazing performance from Denmark’s Casper Steinfath.

From the beginning of the race, Steinfath took the lead and never looked back. Steinfath was followed closely by Jamie Mitchell, who caught up to him by riding a four foot wave to the beach from the outside buoy, 300 meters offshore. As the approached the beach, where they still needed to run across the cobblestone rocks to the finish line, both competitors showed great signs of sportsmanship and camaraderie as they high-fived each other, wishing each other luck before sprinting to the Gold and Silver Medals. When dismounting his board on the beach, Mitchell tripped on the shore break and fell behind Steinfath, who in Denmark’s first ISA event ever, achieved a Gold Medal for the Dannish Team.

The battle for 3rd and 4th place was very close too, but in the sprint to the finish line, South Africa’s Dylan Frick beat New Zealand’s Paul Jackson awarding him the Bronze Medal and Jackson the Copper Medal. 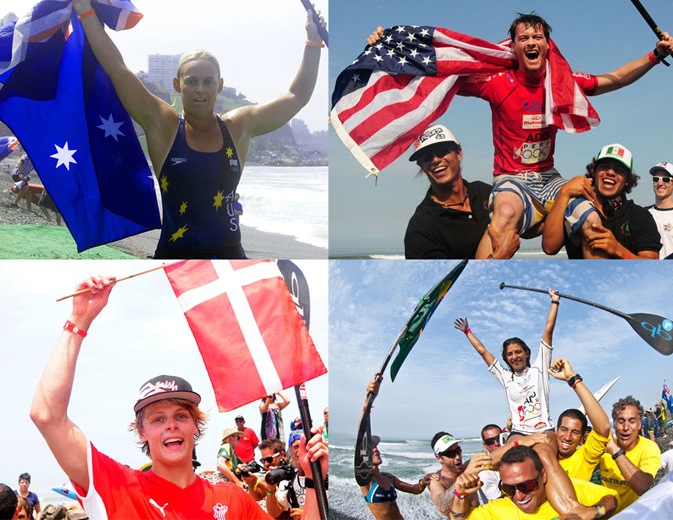