Central SUP in the Midlands are looking for the next generation of racers.

The first of its kind in the Midlands, this race series was designed to promote the sport of SUP and give the opportunity for local people to come and give the sport a go, and perhaps even find some new talent as well. The idea being 5 races over the winter months where participants must race in all 3 classes of all rounder, inflatable and 12′ 6” race boards, which evens the playing field in terms of kit. The top 3 male and female competitors will then be invited to become part of the Central SUP club race team and be supported by the club in taking part in some of the National events across the country. Organisers Chris Kenyon and Scott Warren believe that it’s a good way to get new comers into the sport as SUP racing can be exciting, and exhilarating, whilst getting you damn fit at the same time! With SUP still in its relative infancy it also gives newcomers a chance to brush shoulders with the elite paddlers in the country too.

The first race took place on the 15th December and was well received with 13 paddlers on the water. To make sure the race was fit for purpose a 2k distance was set on the river. Central SUP were really pleased that long time club member ‘nocka’ won with a good lead on the rest of the pack and then total newcomer Paul Williams came in second after only giving SUP a try once before that – now those are the kind of paddlers you want on your team ! Its also worth mentioning Laura Scully who scooped first place for the ladies on an inflatable board, her comments about the race were

“it was tough,i hurt all over but i’m hooked “.

Laura who took up SUP after contacting Central SUP during late summer is now dedicating herself to some full on training for more racing action. What a boost for the sport.
Central SUP hope to continue the success of this and develop a club league table so competitors can follow their progress easily. |Infact Central SUP think that this could be something that other clubs could also employ as well if they are not doing so already of course to help build the club and national scene and encourage more communication between the clubs. Chris Kenyon had this to say “We are currently talking to some of the clubs around the country about this idea and have received some good feedback so far, we hope to organise something soon to get things going. If any clubs think they may want to have an input into this and help to grow the sport then please get in touch with us at Central SUP. ” 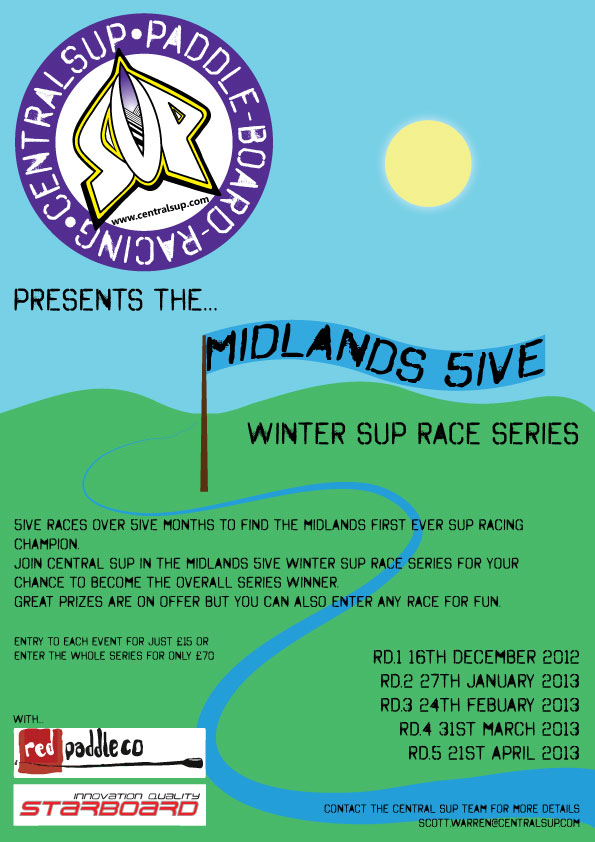