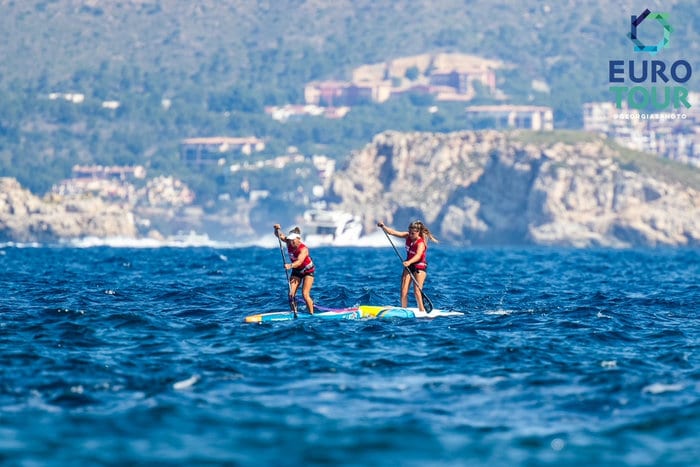 An amazing weekend of racing in Port Adriano, Mallorca, for the Port Adriano SUP Race. The Mediterranean Sea once again showed who’s in charge with the course impersonating a washing machine!

The Women’s race was always Esperanza Barreras that broke stop #1 champion Duna Gordillo, proving in her home grounds that she’s in top form. The ever experienced Caterina Stenta came in third on her first showing this year.

In the Men’s race, Titouan Puyo put in an absolute master class and showed why he’s regarded as the best in the world when the conditions get rough, winning this race. In second was the 3x EuroTour SUP champion Michael Booth. The surprise of the event came in third with 17year old Ethan Bry that kept up with Boothy most of the race and had the best performance of his young career.

Special mention to all the Junior talent that did an amazing job in the Elite race and also had a fantastic showing in the afternoon at their dedicated Events. From 9years old it was impressive to see the passion in all of them cheered by the supporting crowd.

We really want to thanks Laura, Manolo & the entire at crew of @marbalsupcenter for putting on an amazing venue as always and going above and beyond for all the visitors; we’ve missed them on tour and it’s no secret that all the top athletes were itching to come back. Also @portadriano and the city of Calvia for supporting the local center and also the event. Props to @supracer for the great live coverage and supporting the event as well.