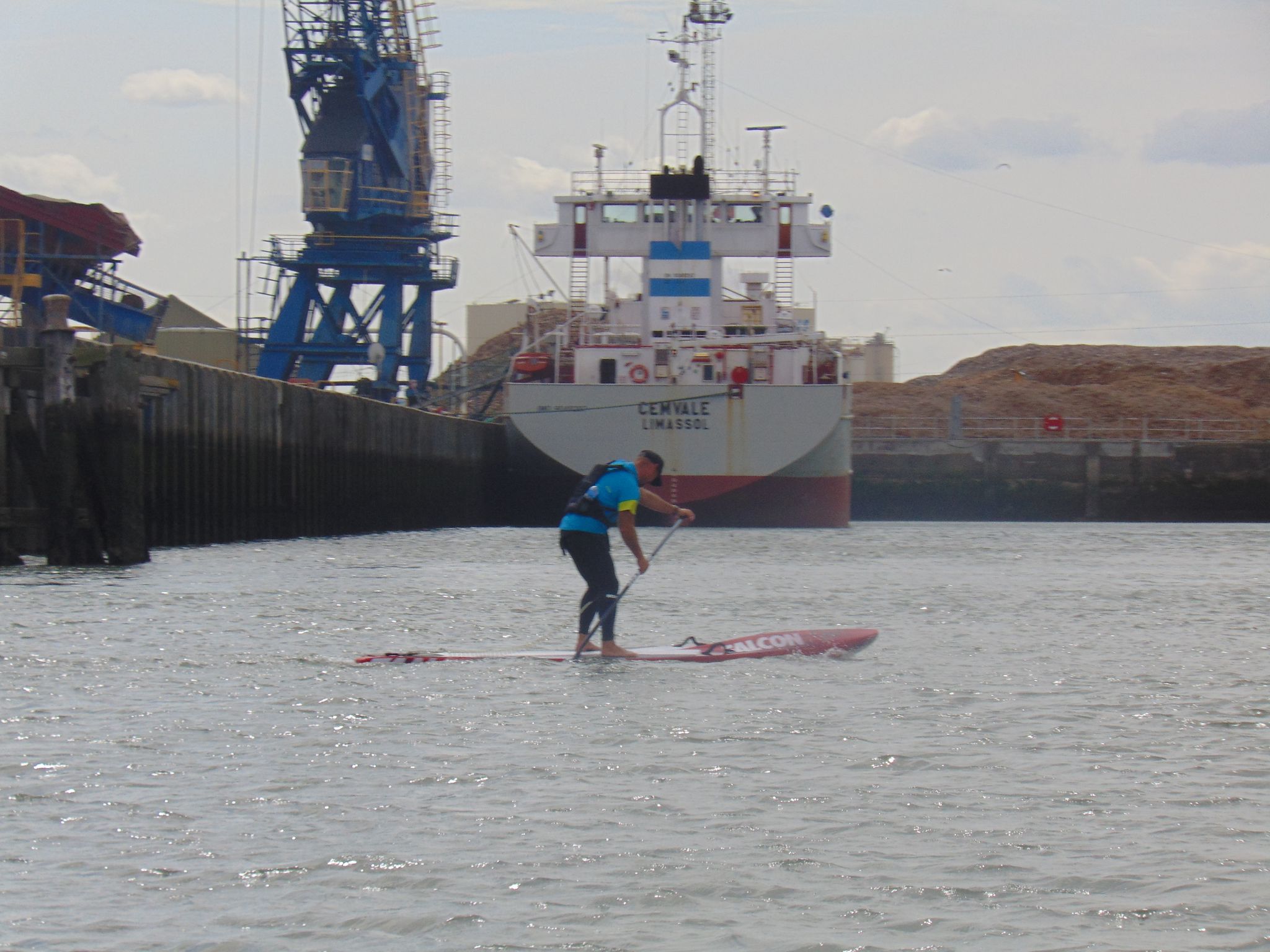 The Isle of Sheppey Sailing Clubs ‘Round the Island Race’ has been sailed in dinghies annually for the past 56 years.  The event is known as the longest dinghy race in Europe and has for many years tested sailing skills and endurance over a gruelling 30 mile course, including sea, river and estuary sailing.  This year, the race organisers for the first time ever opened the event up to paddle boarders.  Ever ready for escaping his cave and challenging his mind and body, Fanatic team rider, Phil Plume took on the challenge…. and now challenges you to try it next year!  Here’s Phil’s inspirational account…

This year and after some encouragement from my Fanatic team mate Jay Manning I decided to enter the Round Sheppey Island Paddleboard race. This is the first year there has been a dedicated SUP race and MASSIVE trophy on offer.

I arrived at the sailing club bright and early, and after breakfast went to register. I had been reliably informed by Jay that the race would be starting between 08:30 and 09:00. The sailing club reliably informed me that I would be starting at 08:00!!! So I was now in a bit of a rush. I parked the van down the road, got changed and climbed the sea wall to walk the promenade to the start line. I could see Julia Haggis (the only other SUP entrant) zipping downwind as I walked back.

I quickly said my goodbyes and paddled out into the North Sea. The first 6 miles were just awesome! I was paddling directly downwind, with a nice knee to thigh high wind swell. I decided to make the most of these downwind conditions, paddling hard for each wave and walking the board to keep the speed generated by the swell.  I quickly passed Julia and after checking that she was ok, I pushed on. By this point the angle of the coast had changed slightly and as a result the wind had swung a little offshore. So I was now continuously paddling on my left hand side.

As I rounded the eastern end of the island and began to make my way up the channel that separates Sheppey from main land Kent (The Swale) I was hit head on by a 20knt wind and ripping tide. This was basically a 10 mile slog and definitely the hardest part of the trip!

At about 20 miles I started to approach the Kings Ferry Bridge. This was probably my lowest moment.  I was shattered! I felt dizzy and my feet were tingling. I really needed to stop, but the wind and tide had other ideas, keeping me away from my stop and at one point pushing me backwards! I finally made it to the stop and refreshed and refuelled.

I departed again at about 14:00 against a ripping tide and the same strong wind. At this point the Swale starts to meander a little more and even doubles back on its self at one point. This allowed me to hug the banks and get out of the worst of the wind and lessen the tidal effect.

I was now approaching Queensbury and Sheerness docks. I had been warned that these waters could be treacherous, with whirlpools, eddies and undercurrents. I was relieved to find none of the above, just a very tricky cross chop which destroyed my already aching legs.

By this point I was regularly being overtaken by the sailors and windsurfers, with almost everyone that passed cheering me on. This was just the motivation I needed and spurred me on as I rounded Garrison Point at the Western End of the island. I could now see the finish line and had the wind and waves on my back. I was flying!  As I neared the yacht club I could see everyone out on the seafront cheering me on to the finish. I passed through the black and white marker poles in a time of 7 hours, 26 min’s and 37 seconds. So happy that I had beaten my 8 hour target!

My full respect goes out to Julia Haggis, who hadn’t even reached the bridge when I was crossing the finish line. She eventually completed the circumnavigation after 11 hours of paddling, to the biggest cheer of the day. As far as we know she is the first woman to complete the challenge.

This is such a technical race. You have to be able to cope with ocean, river and lake conditions, decide when to stop and take on food and water, choose your line to gain shelter from wind and tide or to avoid the shallow water and mud flats. You also need the endurance, or pure determination to complete the distance (I clocked it at 30 miles). It is painful, emotional and bloody hard work, but the sense of achievement (and relief) at crossing the finish line is awesome!

‘So now there’s a name on the trophy and a time to beat. The question is… whose name will be next?’

So have you got what it takes to and get your name next to Phils on the trophy?

Philip Plume is sponsored by Fanatic,  K66 and ION.