The sprint racing for the Camp David Sup World Cup and what an amazing day or racing it was. With strong winds and the best Paddlers in the world competing here in Germany it was a hard fight to the finals and then the podium. 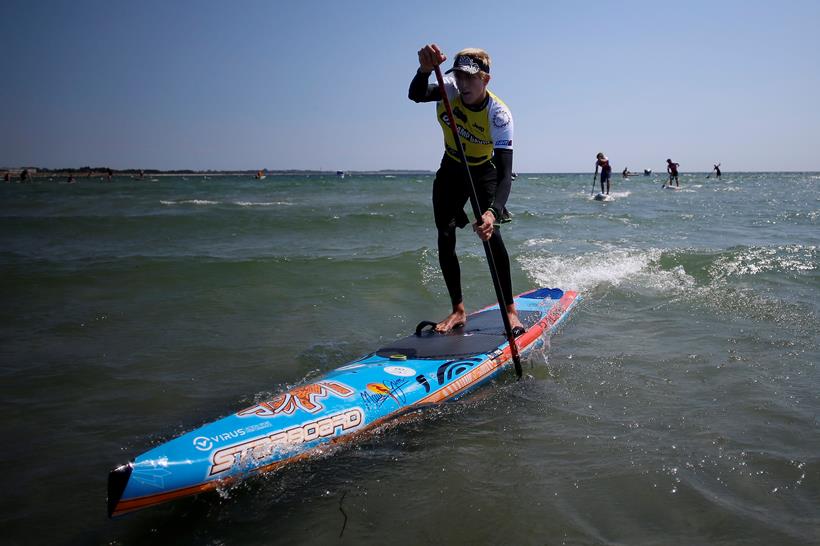 Connor Baxter (Starboard) put on an impressive performance today to take the win in the long distance race for the final day of action here at the Camp David World Cup of SUP, Stop 3 of the 2014 Stand Up World Series. This combined with his second place in the World Series Sprints, also secured him the overall win for this all important stop of the World Series, as we now reach the year midpoint.

With howling winds justing up to 25knts, the course was adapted to make the best of the conditions, offering the athletes an incredible downwind run, mixed with a finishing triangle course to complete the distance that also had an intense upwind section. The downwind run was world class, while the upwind leg was nothing short of grueling, offering a very complete challenge for the assembled athletes, making them dig deep to come out on top.

Connor did just this, as he bided his time on the downwind leg, taking the lead towards the tail end, then going into overdrive on the upwind leg, extending his lead and keeping it through the two lap triangle course to take a convincing win here on the final day of action.

This win, coupled with his second place in the sprints yesterday was enough for him to take the overall win for the event, his second out of three so far this season, meaning that he remains the man to beat in the yellow jersey as we look ahead to Huntington Beach in October for Stop 4 of the World Series. 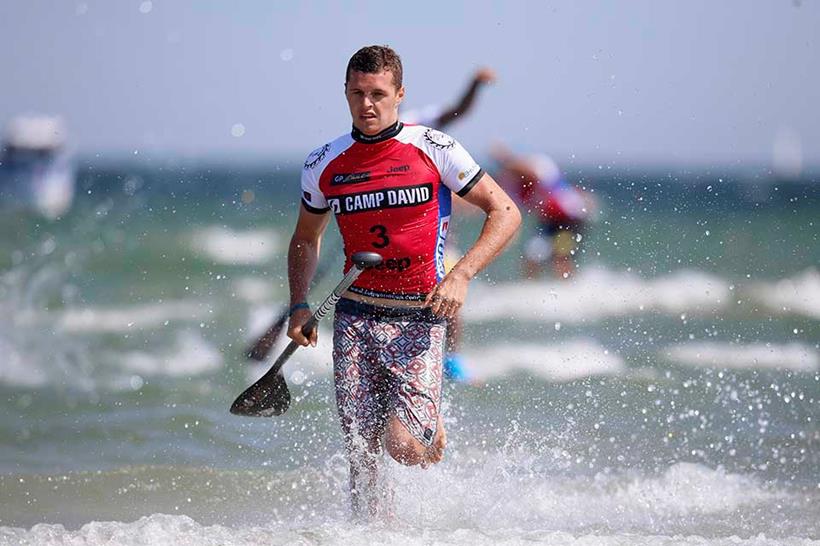 Jake Jensen (Fanatic) once again demonstrated his versatility, physical conditioning and ability in the long distance today, making ground on the upwind leg and battling it throughout the course until the bitter end with Hawaii’s Zane Schweitzer (Starboard), just managing to get the better of the exchange coming into the beach, after just under 10km of open ocean, performance racing.

With his 3rd place in the sprints and 2nd in the long distance, Jake secures a well deserved 3rd place overall for the event and closes the gap between himself and Zane in the overall World Ratings at the year midpoint, still sitting in 4th place, but within real striking distance of the Top 3. Jake now heads down to Rome, Italy for the Final stop of the European Cup presented by Starboard, as he will look to shoot up the ratings at this final event taking place just outside Rome at Santa Severa Beach from the 25th – 27th July. 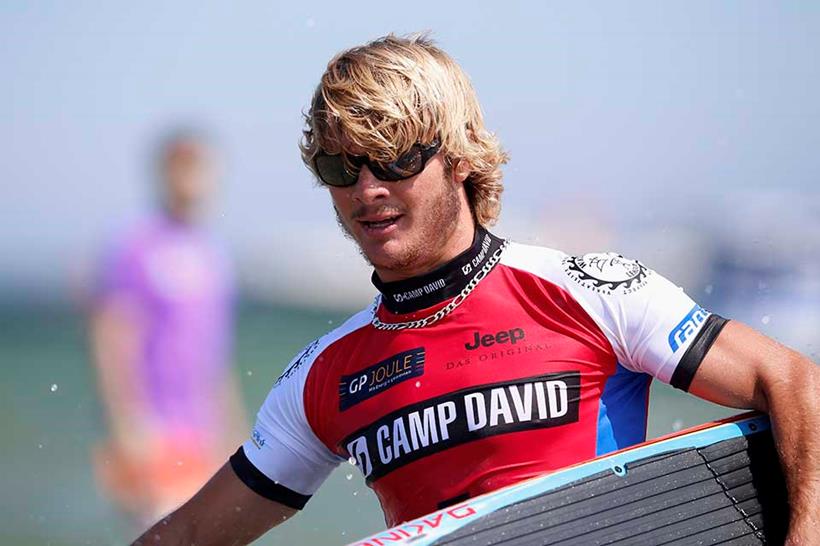 Finishing in 3rd place in the long distance, Zane Schweitzer (Starboard) continued his impressive form in Europe this summer, battling it out with Jake through the long distance race today to finish in an worthy 3rd place, which combined with his 4th place in the sprints, puts him in 4th place overall for the event. This marks the close of Zane’s incredible European campaign that has seen him win 3 out of 4 European Cup Races, and finishing 4th here in Germany, as he now heads home to Maui after a couple of months on the road.

With his 4th place in Germany this weekend, Zane maintains his 3rd place overall in the World Series Ratings after stop 3, just 500 points ahead of Jake Jensen, as the two seems destined to have many more battles this year, as the journey towards a World Title intensifies coming into the second half of the year. 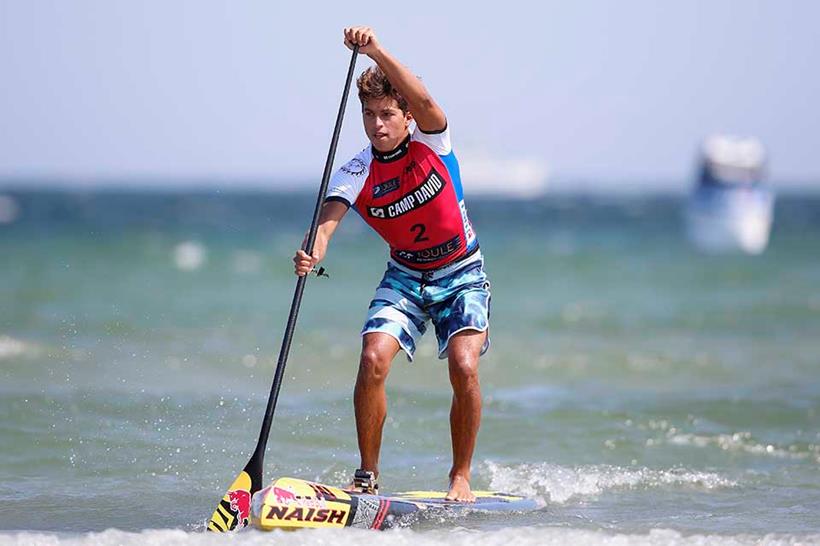 In 4th place today in the long distance, Kai Lenny (Naish) started off strong, but lost ground on the first upwind leg, allowing too much distance to build between him and the Top 3 to make the podium in today’s racing. However, his win in the sprint racing leaves him in 2nd place overall for the event, still a very worthy result for this young Champion.

After Stop 3, Kai remains in 2nd place in the Overall World Ratings, still well within striking distance of the top spot. With one win already under his belt, he has it all to play for here through the second half of the season as the World Title Race will intensify when the World Series returns to the US for this year’s Trilogy, starting in Huntington Beach California from the 15th – 21st September. 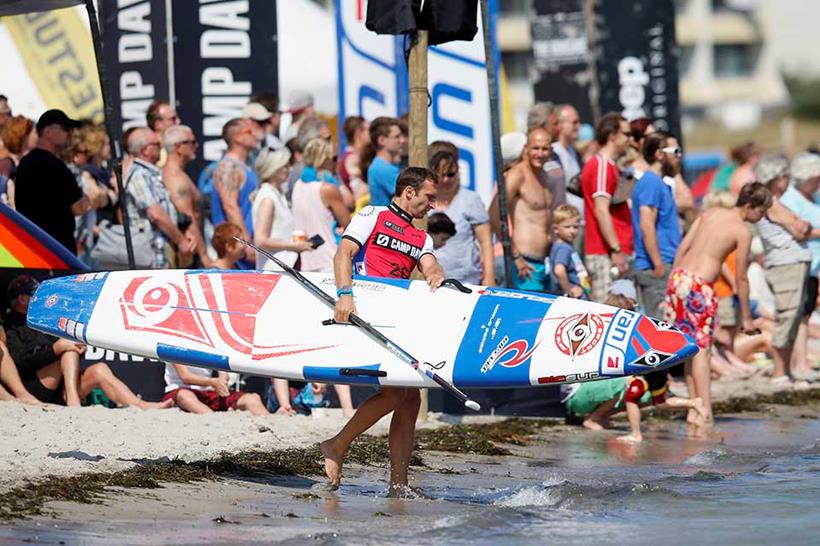 In 5th place today, Eric Terrien (Bic SUP) from France put on a stellar performance, clearly enjoying the downwind runs and powering his way upwind on the 2 upwind legs of the course to just out-run Casper Steinfath (Naish) from Denmark in another exciting battle to the sand. Despite having to repeat a buoy turn (having turned it the wrong way), Eric was able to catch up ground and get the better of the grueling duel with Casper to secure his well deserved 5th place. This combined with his 8th place in the sprint racing puts him in 6th place overall for the event.

Eric now moves up into 7th place overall in the World Ratings after stop 3, as his consistency and valor are paying off this year, as he works his way up and keeps his eyes on the target. 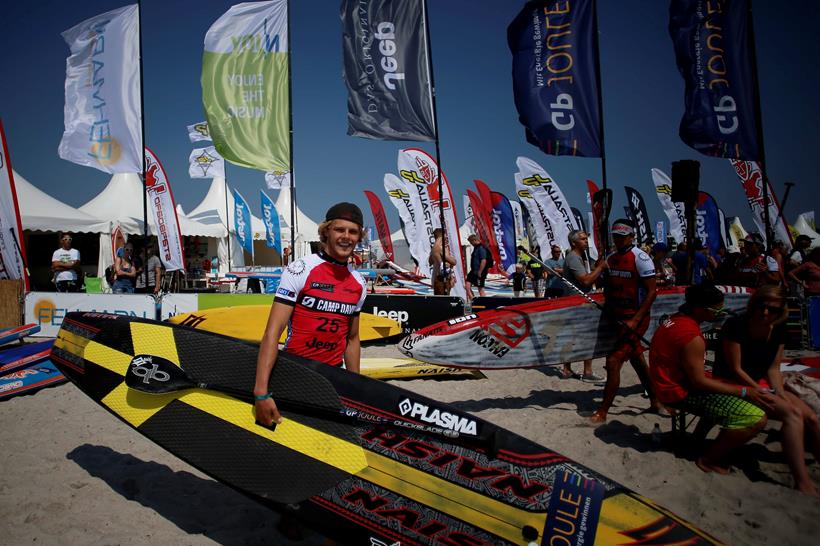 Finishing in 5th place overall (with a 6th place in the long distance and 5th in the sprints) Casper Steinfath (Naish) once again showed he is a force to be reckoned with here on the Stand Up World Series and in doing so, moves up to 5th place overall in the 2014 World Series Rankings after Stop 3. After a strong performance yesterday in the sprints, Casper battled with Eric Terrien (Bic SUP) the entire length of the course, just falling short in the closing feet of the race to finish in 6th.
Casper still remains in 2nd place in the European Cup Ratings and Top European, further strengthening his role as a phenomenal ambassador for European Stand Up Paddling. We can be sure that we will be seeing a lot more from the Viking this season! 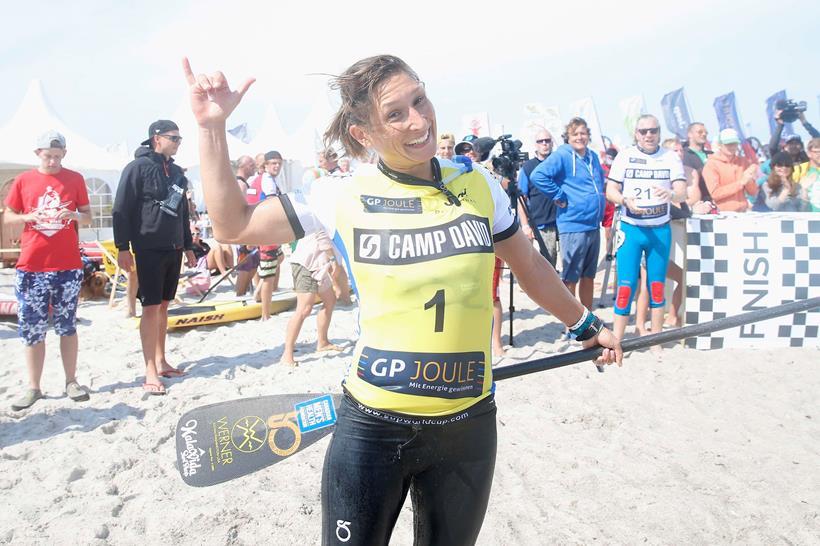 Despite apprehensions about the downwind run, Sprint Racing Champion from yesterday Lena Augaitis from Canada put her all in today’s long distance race to power to another convincing win here in Fehmarn, Germany, to capture the Title here at the Camp David World Cup of SUP, stop 3 of the 2014 Stand Up World Series.
Lena looked strong throughout the weekend and now moves into the World Ratings lead, ahead of Australia’s Angela Jackson (Fanatic), intensifying the Title Race at this year’s midpoint of the season. Make sure to stay tuned right here at www.watermanleague.com as the season unfolds and World Champions are crowned. 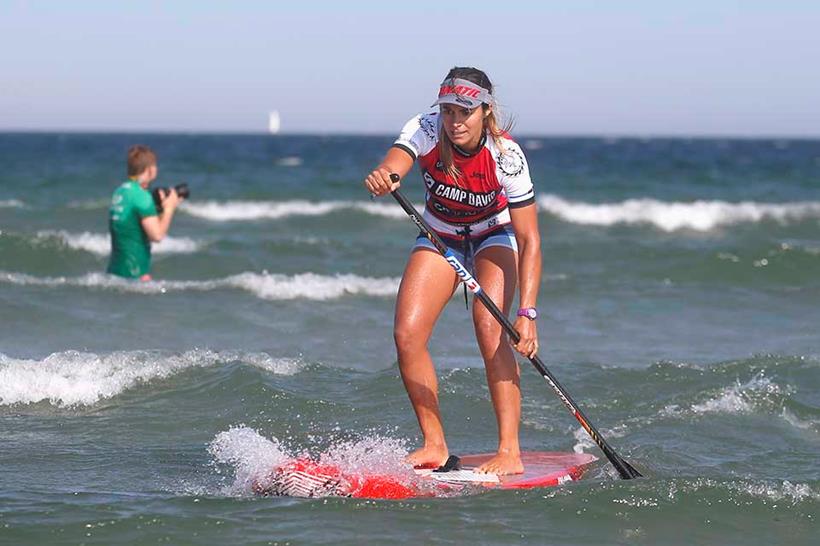 Olivia Piana (Fanatic) stepped up once again today in the long distance, capitalizing on the downwind legs of the course to secure a well deserved 2nd place in the long distance racing. With a second place in the sprints, this confirms Olivia’s 2nd place finish overall for the event as her performances on the Stand Up World Series continue to go from strength to strength.
Olivia now moves into 3rd place overall in the Stand Up World Series Rankings as we have now reached the midpoint of the year and it is all to play for. Make sure to stay tuned for live updates, highlights and much more from the final event of the European Cup taking place in Rome, Italy from 25th – 27th July. 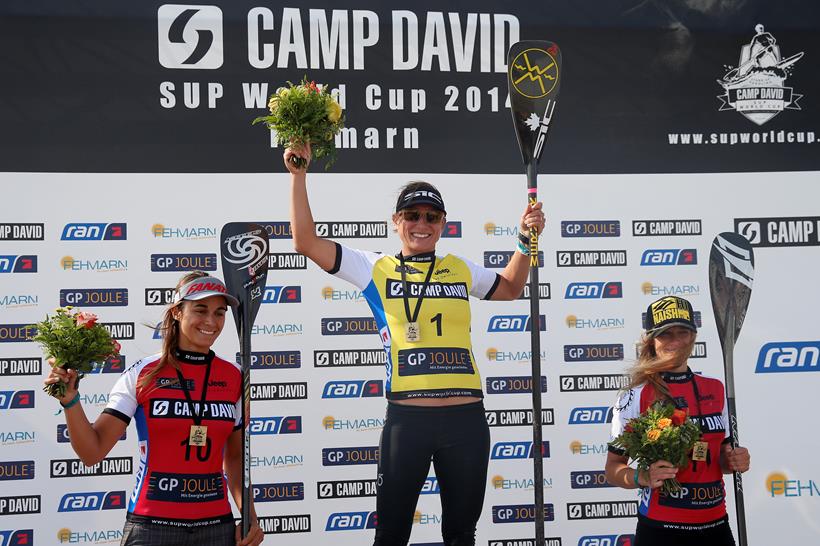 Carla Schellert from Holland put on a stellar performance today in the Women’s long distance race, consolidating on her strong finish in the sprints racing yesterday, to come out of the gate flying.

This commitment and focus awarded the Dutch talent with a worthy 3rd place in the Long Distance and a 5th place in the Sprint Racing, putting her in 3rd place overall. A great result for this new talent from Holland. 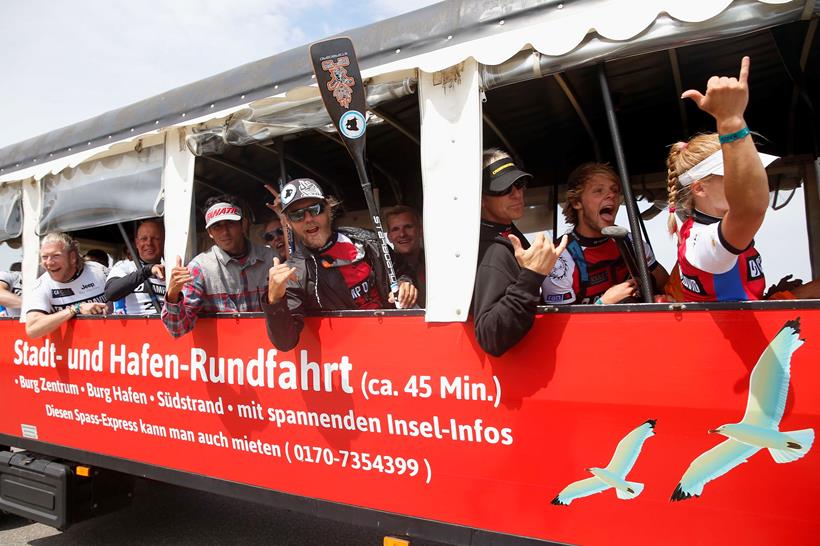 Fehmarn proves to be an incredible venue not only for the Stand Up World Series here in Germany, but Stand Up Paddling as a whole. From entry level participation right through to high performance downwind racing and gruelling World Class competition, the Camp David World Cup of SUP has something for everyone.

This year’s adventure proved remarkabley memorable and a true adventure in every sense of the word. The showcase for the World of SUP was unparralleled, coupled with the dramatic event set up that saw 10’s of 1000’s of people pass through over the weekend.

One thing is for sure, Fehmarn proved itself and then some and we can’t wait to return next year for what will be one of the most widely anticipated races of the 2015 season.

Until then, a big thank you goes out to Camp David, Jeep, Act Agency and all the supporting sponsors for making this year’s stop number 3 on the Stand Up World Series one to remember. So until next week in Rome, for the Final event of the 2014 European Cup presented by Starboard, we wish you all a great week and fun paddling wherever you are.
Aloha and a hui hou.