On 14-16th February The India Surf Festival will be taking place on Ramachandi beach, Odisha. Surfing, SUP, music, and art will bring together not only surfers from across the country and abroad, but also artists, musicians, designers and photographers all wanting to join in the party! Members of the Active 360 SUP school in London, who last year went on the ‘Polar Bears and Paddleboards Expedition’ to Greenland, will be heading over to India to help ‘Surfing Yogis’ not only run the SUP aspect of the festival but also help facilitate the growth of SUP in India. 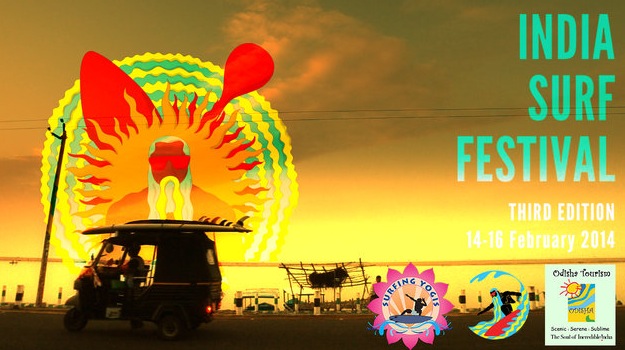 Paul Hyman from Active360 explains more about their involvement ;

One of the aims of the Polar Bears and Paddleboards expedition was to promote stand up paddleboarding; to play our part in putting paddleboarding on the agenda for everyone as an environmentally sound and accessible activity suitable for all ages and abilities. Active360 were proud to pay a leading part in making this expedition happen. It worked! Throughout the project, all of our activities leading up to during and after the expedition, we feel that we really made a difference to the sport by introducing a huge number of people to paddleboarding.

A few weeks after our return, two of the team members were contacted by a group in India who had been following the Polar Bears and Paddleboards project. This group known as the “Surfing Yogis” and led by Sanjay Samantray are really passionate about surfing and SUP. They are the driving force behind SUP in India. They asked Active360 to help them with the SUP part of a surf festival in Odisha on the East Coast of India and develop paddleboarding across the country. In India SUP is known as “walk on water” which we think is a great name for describing the SUP experience.

The Indian Surf Festival ran last year for the second only time with an estimated fewer than 100 paddleboards in the entire country. India has a population of 1.2 billion people with many rivers, lakes and lagoons and a vast coastline so the potential to develop the sport there is hard to take in. I asked how many people attended last year’s ISF event, expecting an answer of somewhere in the region of a couple of hundred – the reply was quite astonishing;  “Last year wasn’t a big year because it’s still new and we hadn’t promoted it properly so we only had a few thousand people over the weekend”. Organisers are expecting the audience for the 2014 Indian Surf Festival to swell to well above last year’s figure. During the India Surf Festival, our team will be delivering  presentations to the full audience, supported with images and video, judging races and awarding prizes.

For several weeks after the initial contact we talked not only about the festival itself, but also about the issues surrounding the development of SUP in India and the factors impeding its growth and as a result we identified three main issues that we felt can help them with.

The first issue surrounds the availability of paddleboards. Less than one hundred boards for 1.2 billion people was a bit of an unbalanced equation last year. Importing boards is prohibitively expensive and betrays the essence of the very environmentally aware population who try to re-use and recycle wherever possible, minimising their carbon footprint.
We have provided a solution which focuses on using local workforces working through ‘cottage industries’ to create and build paddleboards using locally sourced sustainable and recycled materials. Not only does this address the issues of providing a cost effective solution to the problem so that paddleboarding can expand more rapidly, it maintains environmentally sound practices, improves local employment and has the potential to provide communities with exportable products, reinvesting in India.

The second issue is with regards to establishing and maintaining professional standards. To enable any sport to develop and progress there has to be a standardised code of practice so to achieve this we have been working with the ISF team and the Indian government to create a national governing body for the sport of stand up paddleboarding. Drawing on the coaching experience of team members (which includes 3 ASI and BCU coaches with over 17 years combined experience), we have started developing a coaching and instructor training programme for the new national governing body and we will be delivering the first training sessions for coaches and instructors in Odisha in February 2014. A national governing body for SUP across India which people recognise and can affiliate to will help to ensure high standards of coaching and a standard of professionalism which can be used to expand the sport. Coaches and instructors affiliated to a bona-fide national governing body will also give confidence to tourists travelling to the area to experience paddleboarding in some new and quite stunning locations, which is our third area of work.

We are currently working with the very passionate group of people in Odisha and will soon be meeting the tourist minister and the Chilka Development Authority to build the identity of Odisha as a destination for SUP tourism, encouraging people to visit the region from around the globe. Chilka lake will be the centre of the initial focus to drive SUP tourism. Chilka lake is the largest coastal lagoon in India and the second largest of its kind in the world. The lake is teaming with natural beauty; its edges and islands support habitats for an abundance of wildlife and  birds,  there are many ancient monuments, buildings and beautiful beaches. Once we have helped to establish the first area for SUP tourism in India, the ministry for tourism will roll out similar models across the country.

Active360 are undertaking this as a long term project and plan to re-visit Odisha to help further. We will be staying in touch with Sampu and his team and exchanging ideas on a regular basis. Our team of 5 are currently undertaking a huge amount of work to make all of this happen and lay the foundations for progression. In mid February the team will be flying out to India to continue with our work and to help run the first ever Indian Surf Festival SUP Cup!

We are helping this project as volunteers driven by our passion for the sport. We would welcome a discussion from any organizations wanting to be associated with this exciting venture.  We would be happy to feature equipment and branding in the many still and moving images we will send and bring back from the festival and our work in India in the weeks following ISF.
Words – Paul Hyman (Active 360)

So SUPboarders, if you know of any organizations who may be wanting to assist with this exciting SUP venture in India please tell them to get in contact with Paul Hyman at paul@active360.co.uk. Together we can help SUP grow worldwide for everyone to enjoy.