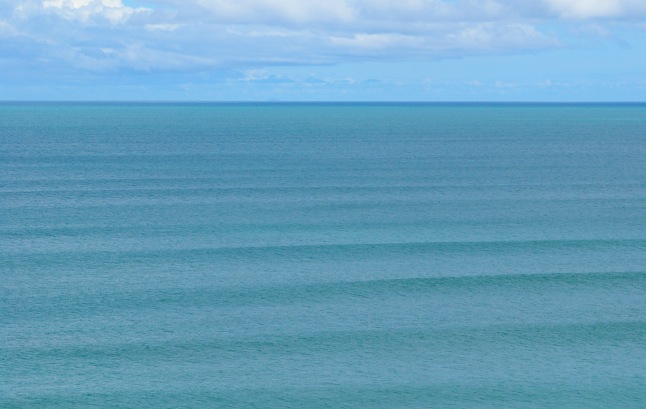 During the first article Part.1 – Weather Systems, we looked at how the Large Scale Weather Patterns present on the Earth develop and grow to give us the conditions needed for the formation of waves.
In Part.2 – The Growth and Propagation of Waves, our focus now is upon how the waves grow and then propagate (travel) across the oceans. We will also look into what factors can affect these traveling waves, and how they form into groups during their propagation.
In order to create a clear understanding of the growth and propagation of waves it is easier to directly split this article into two halves. Firstly we will look at the Growth of Waves, before focusing on how waves move across our Oceans in Wave Propagation.

The Growth of Waves

We start with the question ‘how do waves grow?’ We already know that waves are formed by the action of wind dragging upon the surface of the water, so what happens as waves begin to form to determine their size and shape? I will first expand of the formation of waves as this gives us some answers as to how waves grow.

The winds friction on the water’s surface creates little tiny bumps known as Capillary Waves. At this point we have the vital scenario which allows waves to begin to grow, as the wind can now ‘grab’ these tiny waves and pump more energy into them.  The key point here is that the wind swirls about containing little random disturbances, and when the conditions are right they follow the waves they have just produced growing into larger vortices called Turbulent Eddies 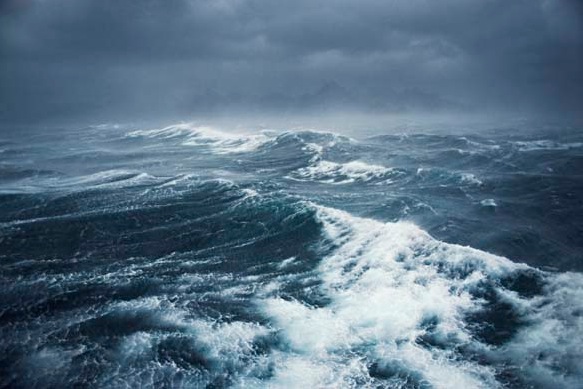 Though their growth the swirling air vortices then alter the pressure over the peaks and troughs of the waves. A cycle can now begin in which as the waves grow so does the size of the turbulent eddies. Quite simply the bigger the waves grow the more grip the wind can find on the surface therefore accelerating the growth cycle of the waves into exponential (increasingly rapid) growth.

Eventually growing waves will reach a maximum size due to the limiting factor of gravity even if the winds continue to blow. In certain locations it is possible to find waves at their maximum possible height such as the Southern Ocean. The winds here known as the ‘Roaring Forties’ blow continuously without the restriction of land and in theory, this ocean has an infinite ‘fetch’ and ‘duration’ becoming a fully arisen sea.
The duration is the length of time over which the wind blows whilst having a direct effect on sea’s surface. If the wind stops before the waves have reached their maximum size you have a duration-limited sea.
Some areas such as the Irish Sea or English Channel are known as Fetch limited, meaning that the distance over which it is physically possible for waves to be generated isn’t big enough to produce waves reaching their maximum height.

The Propagation of Waves 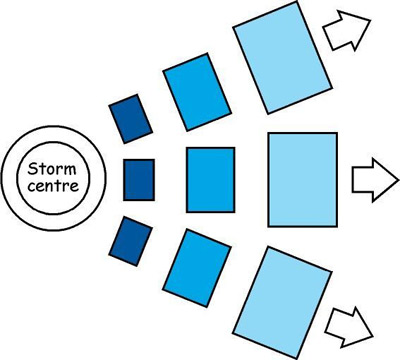 Initially in the wave generation area, the sea contains a wide variety of waves of different sizes, lengths, shapes and directions – an area known as a Wind-sea or a blown out sea. As the waves begin to leave the generating area and are no longer under the influence of the overlying wind, they propagate away as free travelling swell. As these waves travel they actually loose very little energy and can be detected thousands of kilometres from their source, with some records indicating waves recognised which were generated over 10,000 kilometres away.

What happens as waves propagate?

Travelling swell does not actually move any water as it propagates across the oceans. The energy takes on a circular motion and any object seen from the side would do a complete circuit as the wave passes through. The object would end up in more or less exactly the same spot it started in. The orbital motion is transferred to the water below the surface and in deep water this effect gets smaller with increasing depth, eventually diminishing to nothing at some depth equal to approximately half the wavelength below the surface. 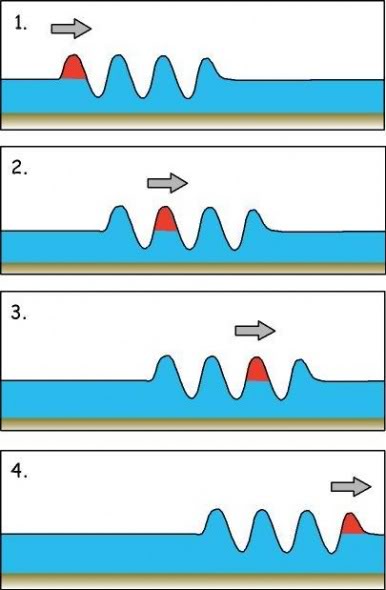 From its early messy confused state the free travelling swell will shift to become more organised given enough time and distance. As the swell travels it gradually spreads out over a progressively wider distance through circumferential dispersion. The waves become smaller over increasing distance with roughly a 20 to 30 per cent decrease in height for every doubling of the distance travelled by the swell from the storm centre.
All waves moving across the oceans do not travel at the same speed. Longer wavelengths propagate faster than the shorter waves which gives us radial dispersion. This causes the bigger waves to race out in front of the swell while the slower ones lag behind.
If one location is close to the storm centre the effects of circumferential and radial dispersion wouldn’t have the time needed to take full effect. The whole swell would arrive within a short time frame making the sea still appear to be mixed up and confused. Whereas the further you travel away, the swell would appear more organised with the larger, faster wavelengths arriving first before the shorter and slower ones would arrive sometime later. It is also possible for these smaller wavelengths to be removed altogether by opposing winds.

Given enough time and a long enough fetch, waves will group together into matching wave speeds and energy levels. Within a traveling group in deep water the individual waves only last for a short period of time. The waves start off small at the back of the group before growing in size through the middle before disappearing at the front. Each wave travels at twice the speed of the group known as phase speed. As the group propagates very little energy is lost and the level of energy contained is linked to the waves themselves often described as ’packets’ of traveling swell.
Groups of wave will largely be formed by the interference of different wavelengths interacting with each other, either from two separate swells coming from different storm fronts, or even from different ‘pluses’ produced by the same storm.
As the different wavelengths pass through each other they superimpose to create one new wavelength of traveling energy. Where the peaks and troughs in the first swell meet their opposing points in the second, they coincide to produce a larger peak or trough, a process known as constructive interference. If however a peak meets a trough in the opposing swell then they actually cancel each other out in destructive interference.

We know that it’s the action of wind dragging upon the water’s surface which generates waves, before a change in the turbulent air which links swirling winds to waves allows for more energy to be transferred into the water. By this understanding of how waves are formed and grow, we can begin to see how different swells form depending upon varying conditions.
Waves cannot grow to an unlimited size even if the wind continues to grow indefinitely; they are however limited by factors such as gravity, fetch distance and duration. Only in one place across the globe is it possible to see the largest waves possible in an area known as the Roaring forties. The great Southern Ocean is fetch and duration unlimited as the winds blow continually in the same direction around the earth.
Through factors of propagation we can now begin to build a picture of traveling swell giving us vital information as to how a swell will arrive upon our coastlines. Through an ever increasing distance, circumferential and radial dispersion takes place beginning to organise any traveling swell.
We also see how the grouping of waves occurs through the interference of different wavelengths, be it from separate swell or even pulses from the same swell. The actual energy lost whilst a swell propagates is very small with individual waves carrying the group’s packet of energy.

In Part.3 – Local Bathymetry (the effects of the Coastline and Sea Floor upon waves) we will focus upon why waves are different in one location to the next, and how the topography (sea floor profile) of any given ‘spot’ alters the wave type we are able to surf. I will also expand upon this by looking at how the waves themselves can shape the environment around the coastline through erosion and sediment movement.

About the author – Scott Warren 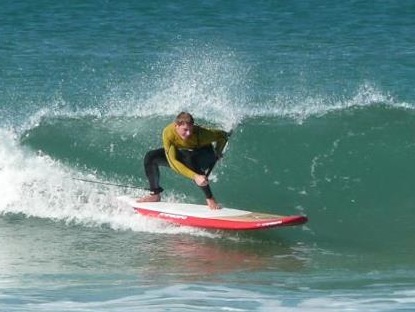 Scott previously lived in South Devon where he attended Plymouth University and studied Surf Science and Technology. He became fascinated with why waves behave as they do, and how the environment in which we surf also plays its part.
Stand Up Paddle Boarding became Scotts way of life when he moved back to the Midlands to his family. Being away from the ocean and surf, SUP has given him more respect for the few moments a year when he gets the chance to visit the coast. As an instructor with Central SUP Paddle Boarding Scott has introduced a number of others into SUP surf for the first time. As part of his lessons Scott always tries to share some of his passion and experience with new and old paddlers alike, always in view of that next trip to the surf.
Though his fascination with waves Scott hopes to be able to give people a better understanding and respect for the environment which they enjoy, despite the cold, mixed up surf and long distances they have to travel living in the Midlands. And if others take one small thing and use it in their everyday surfing life then he considers his work a success.
Scott does not however pretend to be an expert in oceanography, SUP surf or the environmental impacts for that matter… just a paddler wishing to share some of his amazement for the oceans and waves. For more information and a deeper overall content of the surfing environment and its factors, Scott recomends ‘Surf Science – An Introduction to Waves for Surfing’

“I wish you all happy surfing. Remember to always have fun, enjoy and preserve the ocean environment. For the moments of pleasure it brings us would be lost without our respect and conservation” – Scott Warren